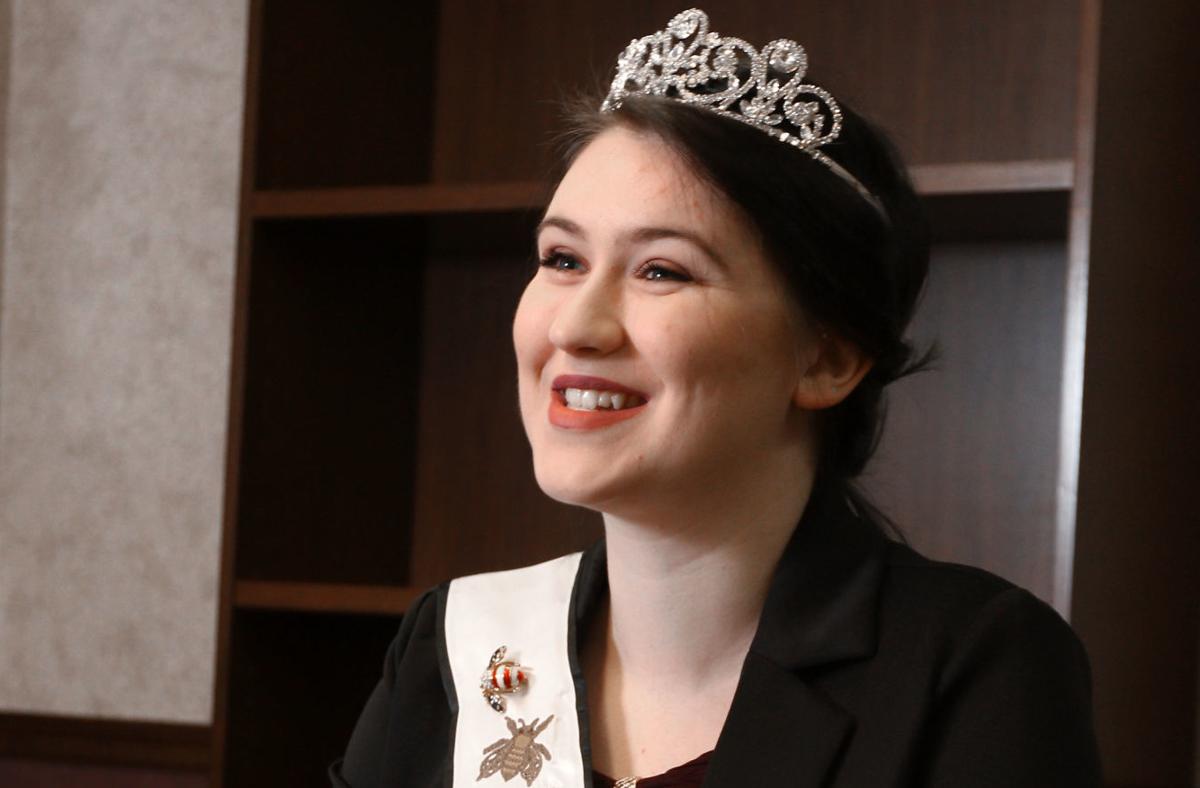 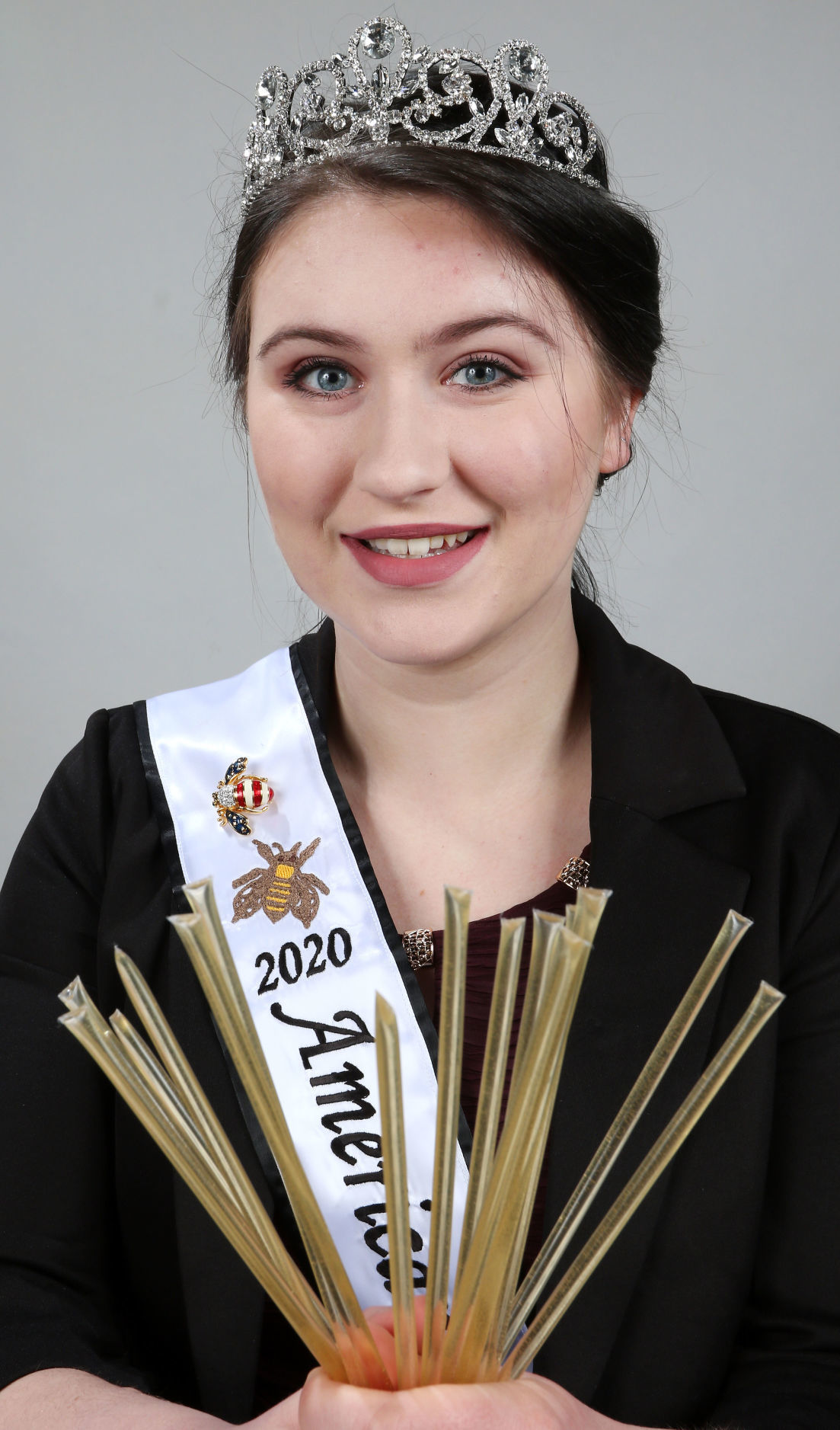 Sydnie Paulsrud, a Chippewa Falls resident, recently was chosen as 2020 American Honey Princess. In her new role, Paulsrud will travel the country visiting with beekeepers and presenting information at schools, conventions and state fairs. View more photos at LeaderTelegramPhotos.com.

Sydnie Paulsrud, a Chippewa Falls resident, recently was chosen as 2020 American Honey Princess. In her new role, Paulsrud will travel the country visiting with beekeepers and presenting information at schools, conventions and state fairs. View more photos at LeaderTelegramPhotos.com.

Like many kids, Sydnie Paulsrud grew up afraid of bees and their stinging potential. That fear has dissipated in recent years as Paulsrud has spoken about honey and the beekeeping industry through several public roles on the local and state levels.

Paulsrud, who grew up in Eau Claire and recently moved to Chippewa Falls, was the 2019 Wisconsin Honey Queen and served as Chippewa-Eau Claire Honey Queen in 2018. In her new role, Paulsrud will travel the country visiting with beekeepers and presenting information at schools, conventions and state fairs.

The state and national titles depended on her knowledge of beekeeping and ability to communicate. At the national event that took place from Jan. 7-12, Paulsrud was judged on her presentations and interactions with dozens of vendors and attendees over the course of several days before a final panel interview run by three judges.

According to Anna Kettlewell, chair of American Queen Honey Program, the judges observed Paulsrud during the first few days but remained anonymous until the panel interview. That way, Kettlewell said, judges can observe the nominees’ “real-life performances” during dozens of personal interactions. Paulsrud was crowned Jan. 11 at a banquet and went through a weeklong training program shortly afterward.

The American Honey Queen award dates back to 1959. Wisconsin has produced seven queens, including Kettlewell in 1999, and seven princesses. Paulsrud is the fourth Wisconsinite to hold a national crown in the last five years. Kettlewell has worked closely with Paulsrud over the past five weeks and said she is caring, personable and “has a beautiful speaking style.”

Paulsrud’s duties will begin to ramp up later this month with trips to Minnesota and Indiana. Her busiest stretch involves the months from July to October, which will involve either flights outside Wisconsin or drives to local and regional events nearly every week. Paulsrud looks forward to visiting places like California and learning how the beekeepers run their farms in warmer climates.

Kettlewell said Paulsrud and Reisinger will combine to travel about 300 days total this year. Paulsrud will have her expenses reimbursed and receive a scholarship when her time concludes. Kettlewell declined to specify how much money the scholarship entails.

Paulsrud doesn’t have direct experience with beekeeping but said she attended honeybee meetings with her family, which sparked her interest in the topic. Shortly after, Paulsrud applied to be the Chippewa-Eau Claire queen and won the title. As local and state queen, Paulsrud traveled around Wisconsin learning about beekeeping and gave presentations and cooking demonstrations.

Paulsrud said it can be challenging to give presentations to rambunctious elementary-schoolers, but they usually become interested when she provides notable information.

“Once I spew out those bee facts and hit them with some numbers, then they find it really fascinating and they want to learn more,” Paulsrud said.

That information includes the fact that there are about 300 varieties of honey. Wisconsin, for example, produces cranberry blossom honey and buckwheat honey, which has a molasses taste. Paulsrud said her favorite honey-infused food is a honey lime fruit salad.

A typical honeybee hive contains the queen bee, which lays about 2,000 eggs per day. The female worker bees gather nectar to produce the honey, and the male drones are used for reproduction.

In colder climates like Wisconsin, beekeepers “winter” the insects by either shipping them to warmer areas or wrapping the hives with insulation and storing then away from outdoor elements. They eventually release the bees to pollinate and produce honey during spring and summer. Honeybees consume most of the honey to survive during colder months, and beekeepers collect whatever is left over.

Paulsrud has never been stung by a honeybee, but that might change at a state fair this summer when she plans to wear a “bee beard” consisting of at least several hundred insects on her face. Honeybees are unlikely to sting unless they feel someone is invading their habitat, since stinging results in a bee’s death.

“Honeybees are very gentle, and you don’t need to worry about them coming after your food or trying to chase you,” Paulsrud said.

Despite her hesitancy at a young age, Paulsrud has learned more about honeybees and developed her passion over the last few years. After her American Honey Princess duties conclude next year, Paulsrud has set her sights on a new long-term goal: working as a beekeeper.