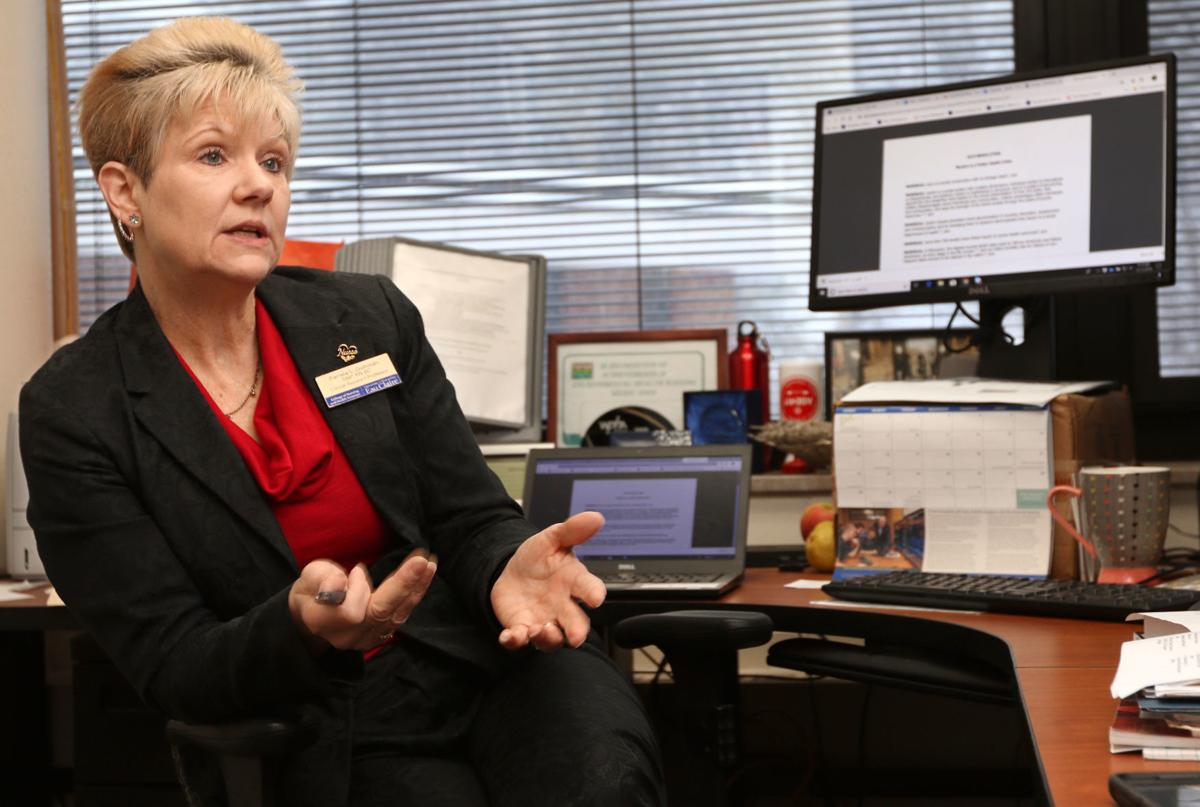 UW-Eau Claire clinical assistant professor of nursing Pamela Guthman talks in her office Dec. 12, 2019. Guthman is one of several community members addressing racism through the lens of public health.View more photos at LeaderTelegramPhotos.com. 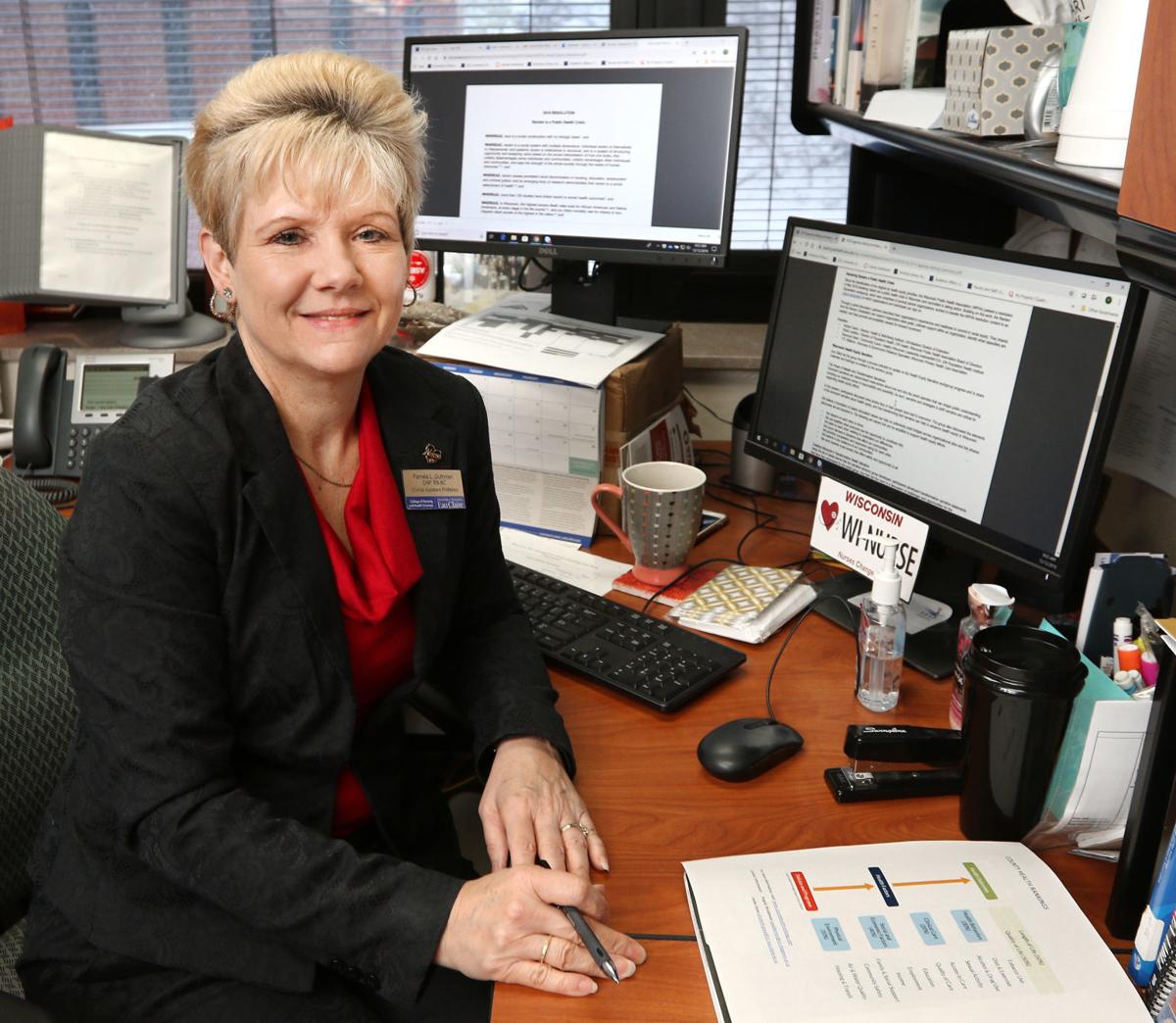 UW-Eau Claire clinical assistant professor of nursing Pamela Guthman talks in her office Dec. 12, 2019. Guthman is one of several community members addressing racism through the lens of public health.View more photos at LeaderTelegramPhotos.com.

It was a brutally cold night early in her nursing career, and Guthman visited an African-American mother and her young child who lived in a trailer without heat. Guthman saw the child’s shoes frozen to the floor, a stark illustration of the dire severity of the situation.

That memory is seared into Guthman’s mind and helps drive her work to make public health more equitable.

“It just doesn’t leave your heart and soul,” Guthman said. “You understand the humanity and how the inequities of not having policies and funding to support the needs of people just to meet basic living needs transcends across all of us as human beings.”

Guthman worked in nursing for several decades after graduating from UW-Eau Claire and now teaches at her alma mater as a clinical assistant professor of nursing, educating future medical professionals on the importance of health equity. While the university works toward racial equity in the aftermath of multiple racist incidents last semester, Guthman is one of several community members addressing racism through the lens of public health.

Eau Claire City-County Health Department Director Lieske Giese was president of the Wisconsin Public Health Association when it declared racism a public health crisis in May 2018.

“It became clear to the organization as a whole that being silent was not OK,” Giese said.

One section of the declaration says racism “saps the strength of the whole society through the waste of human resources.”

Giese, who currently serves as WPHA past president, said all people pay more in the long run as a result of health inequities, such as higher health insurance costs or funding the maintenance of local jails. She said the declaration ideally will help health care professionals address the role race plays in outcomes and then design programs and policies to combat its negative effects.

The WPHA is not immune from those effects, and Giese said a consultant will soon release a report regarding how to improve the organization’s racial makeup.

“We’re hoping to look broadly at, ‘What are some of those changes that we can make as an organization to really explicitly look at race?’” Giese said.

That applies to the city-county health department as well, which is receiving training from the Government Alliance on Race and Equity to improve health equity in five areas: research; narrative shift; policy development; movement and capacity building; and institutional and sector change.

“We are not pretending that racism is not an issue in Eau Claire,” Giese said. “We’re bringing race to the table … People have different experiences in Eau Claire if they have black and brown skin, and we have to acknowledge that.”

Guthman is a WPHA member and serves on the health equity narrative work group for the Wisconsin Healthiest State Initiative. That group focuses on creating shared language and understanding the differences and commonalities between people.

Intense conversations occurred between work group members regarding proper language around racism, which Guthman said forced her to think critically about her own stereotypes.

“You really try to seek deep understanding about the humanity of people,” Guthman said. “It challenges you to think beyond what you think you know.”

Shared narrative examples include emphasizing the interdependence between people and understanding that everyone is healthier when people have equitable opportunities to contribute to society.

Empathy is vital as well, and Guthman stressed the importance of seeing others as worthy of respect.

Guthman also aims to help people understand the current impact of historical inequities derived from race and wealthy power in areas like housing and education. She said difficult conversations about racism and its current manifestations in public health are crucial to making progress.

“We should be talking about this, and if we don’t talk about this, we will not be able to ever achieve health equity,” Guthman said.

Giese said health equity means positive outcomes as a result of providing the right tools to different groups of people.

Guthman gave the analogy of three people of different heights standing behind a fence watching a baseball game. One person is 4 feet tall and needs to stand on a high stool to properly see over the fence. Another person is 5 feet tall and requires a smaller stool to receive a proper view. The third person is 6 feet tall and already has a quality vantage point so does not require a stool.

Giese used that example to outline the differences between health equality and health equity.

Giese said all health outcomes have racial disparities, which is particularly true for some aspects in Wisconsin.

According to a report from the Wisconsin Department of Health Services, from 2015-17 the death rate for infants born to black mothers was 15 deaths per 1,000 live births, compared to 4.6 deaths per 1,000 live births for infants born to white mothers. The same report showed that the percentage of mothers who received adequate prenatal care during pregnancy in 2017 was 83.4% for white women, 70.2% for Hispanic women, 60.4% for American Indian women and 60.3% for black women.

Guthman said challenges to make outcomes like infant mortality rate equitable stem from “structures built upon assumptions of white privilege” and power. She said that means health care workers have a responsibility to elevate historically marginalized voices, something she stresses to students.

Guthman teaches several courses on public health nursing and has co-taught a course on introduction to public health for a few years with Crispin Pierce, an associate professor in the Environmental Public Health program.

Students in that class take a Harvard Implicit Association Test midway through the semester that focuses on implicit racial bias and can reveal if people prefer white or black faces. Pierce then asks students on an exam how their response could relate to people receiving different health services.

Pierce wants students to address these important issues, and one of the first steps involves acknowledging biases and recognizing how they manifest. The racist incidents last semester crystallized for Pierce that everyone must reflect and then work together to better address racism.

“It’s me looking inside myself with the Implicit Association Test, seeing what I can do,” Pierce said. “I took that to heart, saying, ‘It’s gotta be me.’”

The overarching goal of locals like Guthman, Giese and Pierce involves a commitment to addressing health inequities in a proactive manner to make individuals and society healthier. That can be done on a personal level by people acknowledging their biases and on a wider scale by addressing precursors of health, including race.

“If we want a healthy public, we have to go upstream and look at things that are impacting health outcomes, and race is certainly one of those places where we’ll be continuing to focus,” Giese said.