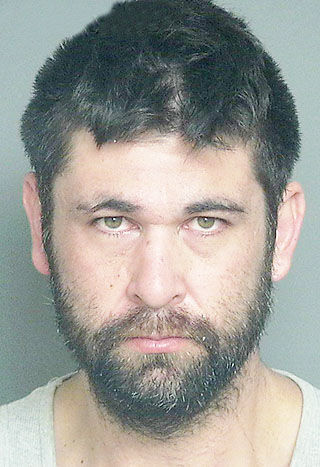 A Mondovi man will be sentenced Sept. 30 for stealing a $58,000 check from a business during a burglary and possessing a stolen vehicle, and burglarizing a UW-Eau Claire office.

The man made purchases with credit cards he took from the offices, authorities say.

Jason T. Harding, 38, pleaded no contest this week in Eau Claire County Court to seven felony charges: two counts each of burglary and operating a vehicle without the owner’s consent, and one count each of theft, forgery and attempting to flee an officer.

Judge Sarah Harless revoked Harding’s $5,000 signature bond, meaning he will remain in the Eau Claire County Jail until his sentencing.

Harless ordered a pre-sentence investigation by the state Department of Corrections.

Harless could sentence Harding to up to 27 years in prison.

According to the criminal complaint in the UW-Eau Claire case:

A UW-Eau Claire employee with an office at the McPhee Center came to work Aug. 26 to find that his office had been burglarized over the previous weekend.

The door of the office was locked and closed but entrance was gained by breaking the screen on the window.

The employee canceled the credit cards but learned they were used three times over the weekend to make purchases at stores in Eau Claire and Chippewa Falls.

Security cameras showed a man leaving that McPhee office at 3:32 a.m. on Aug. 24.

Law enforcement officers recognized the man as Harding based on previous contacts.

During an interview with police, Harding said he entered the office because the window was open.

He confirmed that he used the credit cards to make purchases.

According to the criminal complaint from the business case:

An Eau Claire police officer was sent to Christie Heating and Cooling, 829 Eddy St., on Sept. 20 for a burglary.

The owner said he arrived at the business and discovered damage to a door and property missing.

Some items were taken from the business office, including a check for $58,000 that Christie Heating and Cooling received from another business.

The owner contacted the other business, which notified its bank and canceled the check.

Surveillance video from Christie Heating and Cooling showed a male suspect walking outside the business overnight while holding a crowbar.

During the investigation, Harding was identified as the suspect.

When police found Harding Sept. 29, he had the stolen $58,000 check in his wallet and was using a truck that had been reported stolen in Lake Delton.

Harding said he planned to use the money from the check to pay off his fines, and that he thought it could change his life.