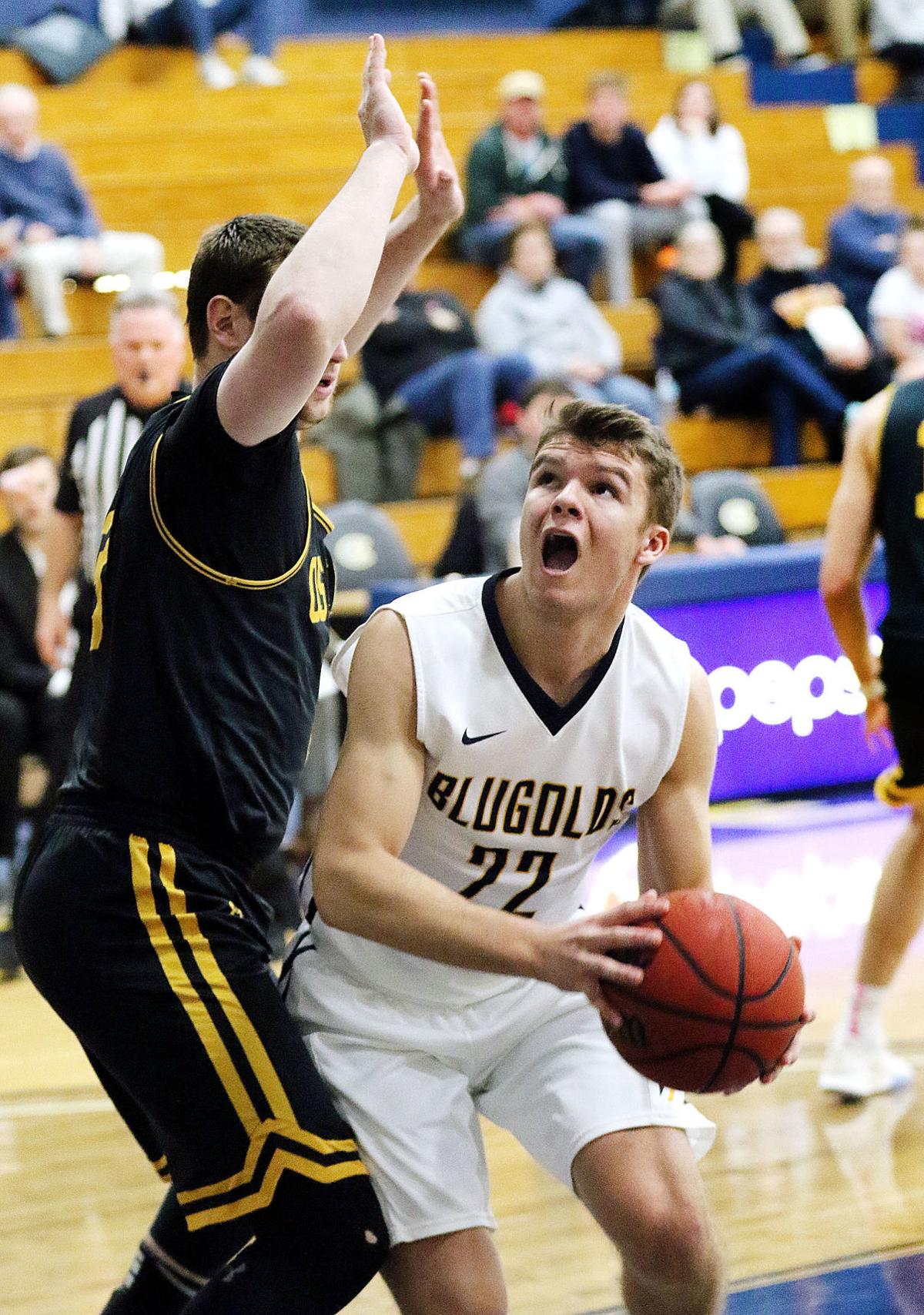 Blake Wacholz of UW-Eau Claire finds his path to the basket blocked by UW-Oshkosh defender David Vlotho in first half Wednesday at Zorn Arena. Wacholz led Blugold scorers with 21 points in the game. View more photos at LeaderTelegramPhotos.com 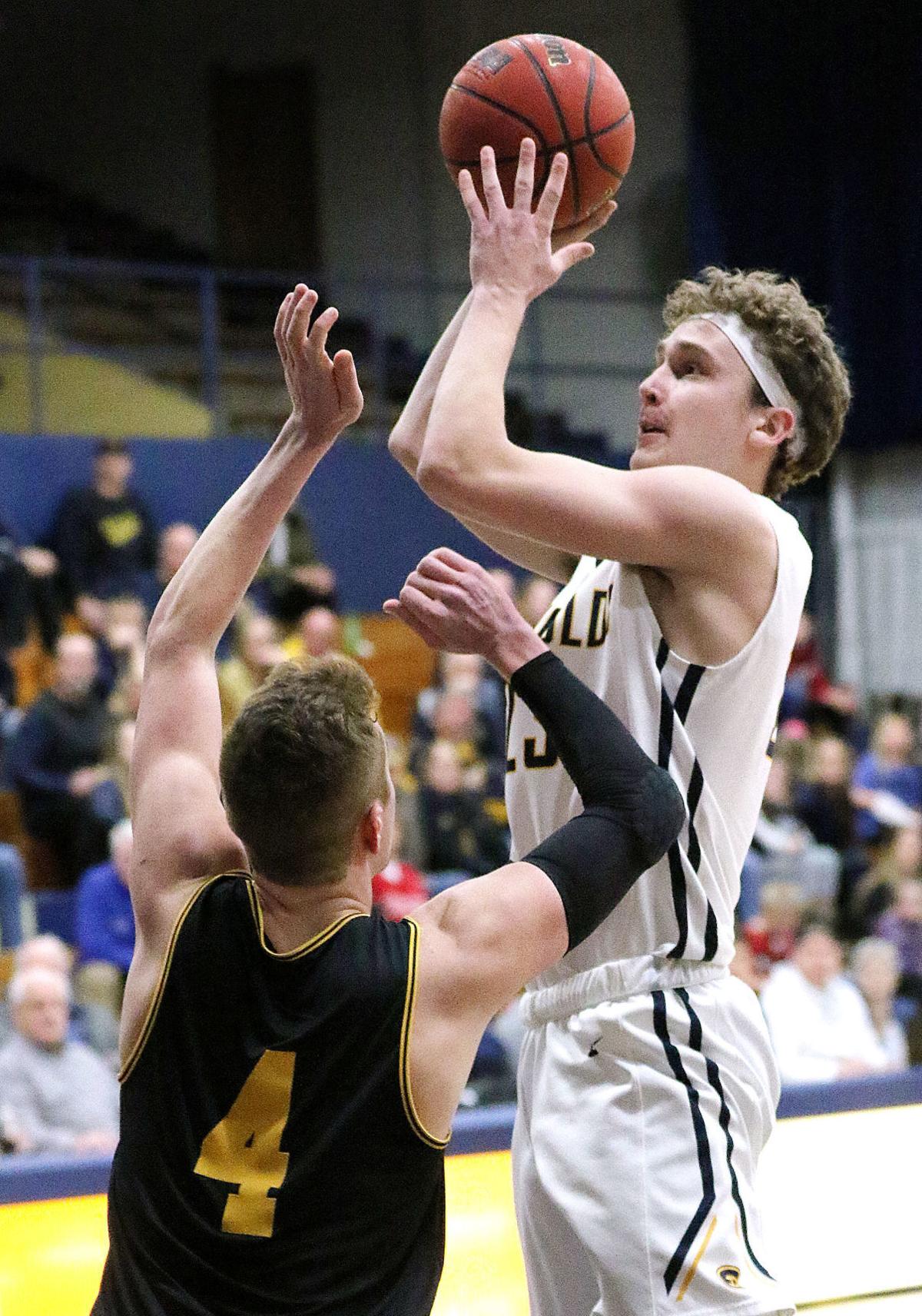 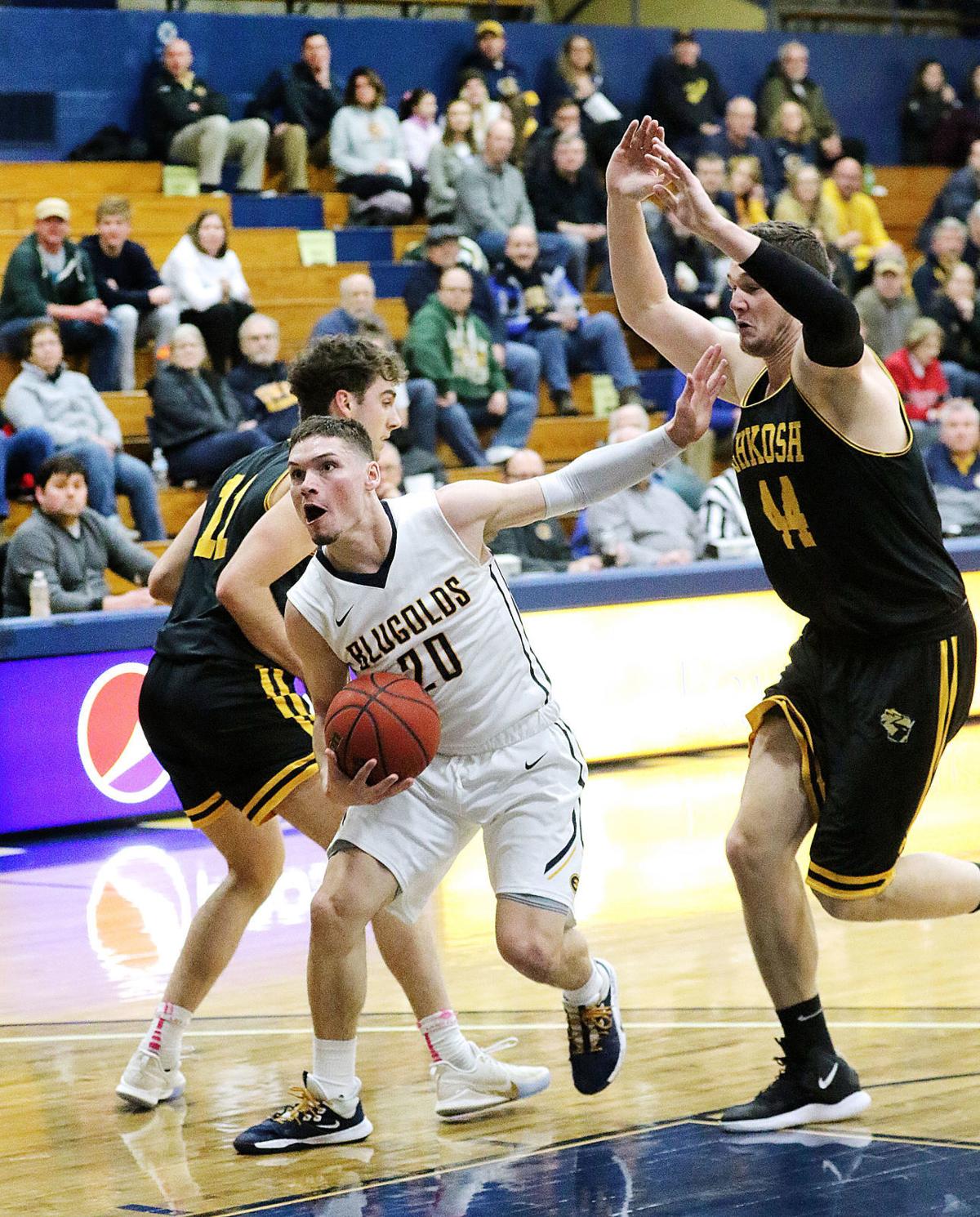 Blake Wacholz of UW-Eau Claire finds his path to the basket blocked by UW-Oshkosh defender David Vlotho in first half Wednesday at Zorn Arena. Wacholz led Blugold scorers with 21 points in the game. View more photos at LeaderTelegramPhotos.com

Then, absolutely nothing went right.

The Blugolds failed to put up a point in the final five minutes and 13 seconds of action, allowing UW-Oshkosh to go on a game-closing 16-0 run in an 82-66 Titans victory Wednesday night at Zorn Arena.

“Really frustrating when you play that full game and then the last few minutes they use their size on us,” Blugolds guard Black Wacholz said. “We needed to get stops down the stretch and we didn’t.”

UW-Eau Claire handled the Titans size for much of the contest, but UW-Oshkosh was able to fully utilize the advantage late. When Adam Fravert wasn’t hitting 3s on offense, the Titans were able to get into the paint for buckets. On defense, the Titans blocked two Blugold shots in the final stretch and forced a travel.

“Down the stretch they were able to make plays and we just didn’t have the size and the physicality to defend it,” Blugolds coach Matt Siverling said. “You can go double, you can try and take it out of their hands, but then you open yourself up to 3-point shots. We really didn’t want to take that risk because the game really could have gotten out of hand.”

Fravert hit a 3-pointer to kick off the run with 5:01 remaining after UW-Eau Claire’s Spencer Page tied it at 66. A missed Page jumper later and David Vlotho put the Titans up five, recovering a rebound after a no-call push on a Blugold defender.

Vlotho extended his personal 5-0 run when he recovered a rebound and was fouled making a putback with 3:16 remaining. He hit the free throw to push the lead to 74-66 and make a comeback unlikely. Fravert hit a layup and a 3 and reserve Brandon White closed the late push with a shot from deep after Oshkosh subbed its starters out.

“It’s kind of like football,” Siverling said. “You get the lead and you know the other team is going to pass it, so you pass rush.”

UW-Eau Claire’s losing streak moves to three with the defeat. The skid started with the team’s home I-94 defeat against UW-Stout and has continued thanks partially to the schedule, with UWEC facing two of the better programs in the league in UW-Platteville and the Titans.

“That Stout game was a big one for us and I think looking at the schedule I knew it was going to be,” Siverling said. “But if you want to be good and you want to be the best you’ve got to beat the best. This league, there’s no easy games.”

UW-Eau Claire led by as much as 6, earning its largest advantage when Carter Brooks hit a 3-pointer with 8:39 remaining in the second, and responded well to every Oshkosh basket until the final stretch in a game that featured 17 lead changes. The Blugolds never trailed by more than four points before the final run and led as late as the 6:42 mark of the second.

“Our spacing was really good at times,” Siverling said. “You could see we were able to get to the rim.”

Leading the way was Wacholz, who had tremendous success getting to the basket. He finished with 21 points while hitting on 5 of his 6 2-pointers.

“They rely heavily on their shot blocking and sometimes their gap help isn’t the best,” Wacholz said. “You can see those lanes and if you beat them to the rack you can get them up and get those layups in.”

Fravert finished with 28 points for the Titans, joining Wacholz as the only plus-20 point scorers.

UW-Eau Claire will look to halt the losing streak on Saturday when the Blugolds travel to Stevens Point. The Pointers, which earned a 66-64 upset of No. 7 UW-Platteville on Wednesday, are tied for first in the league standings with a 3-1 record.