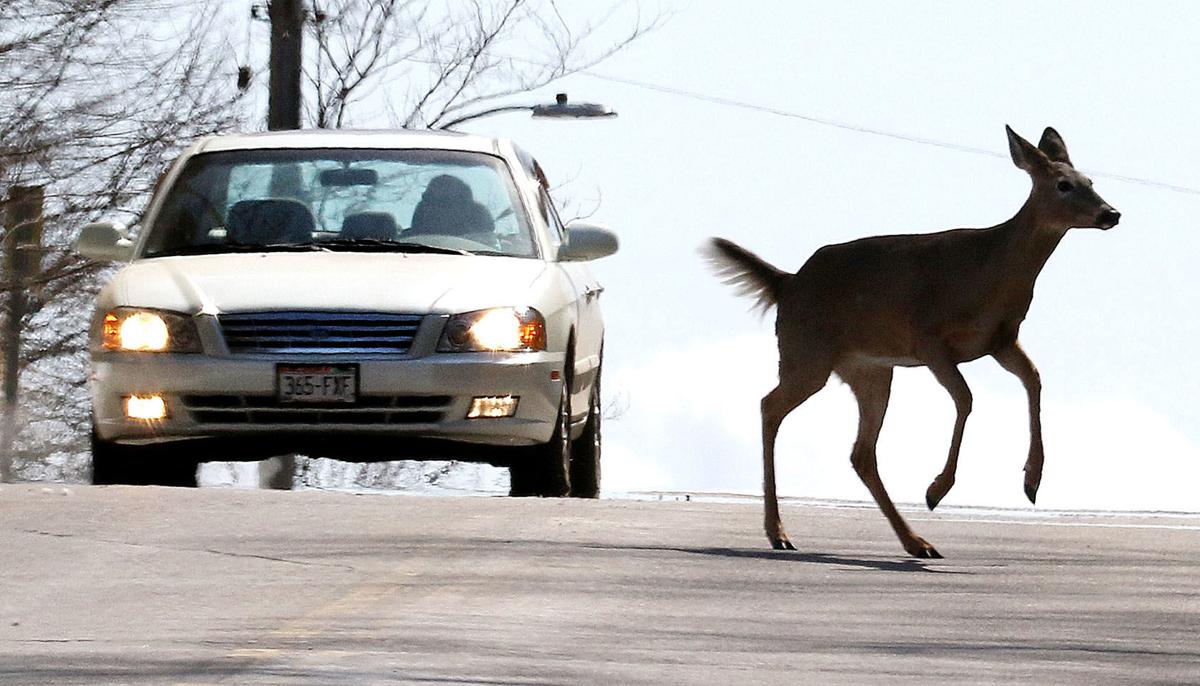 In this April 2018 photo, one of a group of about a dozen deer halts traffic while crossing Fairfax Street near South Middle School. 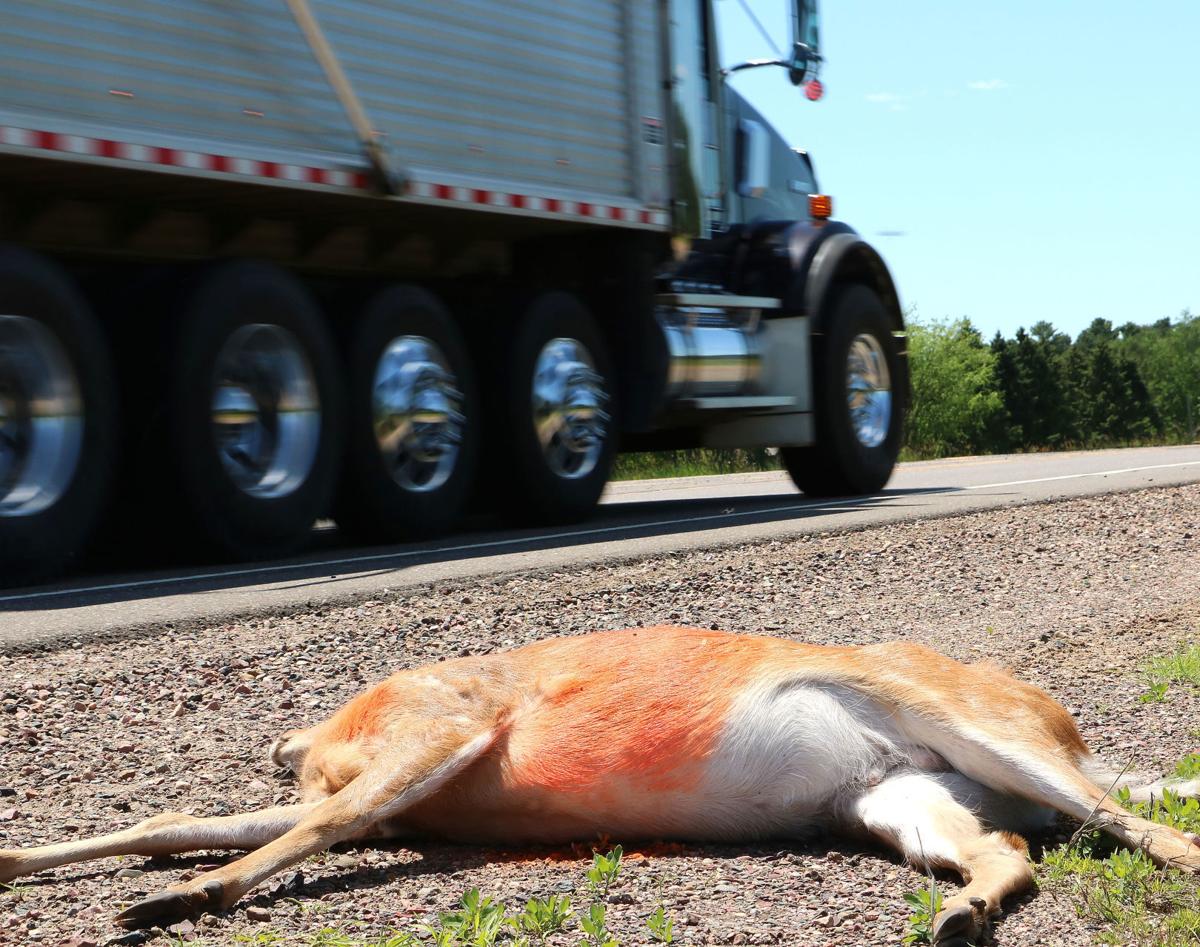 Barron County has seen a rise in car-deer crashes like this one near Cameron last week.

In this April 2018 photo, one of a group of about a dozen deer halts traffic while crossing Fairfax Street near South Middle School.

Barron County has seen a rise in car-deer crashes like this one near Cameron last week.

Spring turns to summer, and roadsides are a lush green spotted with wildflowers. Unfortunately, the scene is too often spoiled by a sprawled deer, killed in a collision with a vehicle.

This spring appears to have been a particularly hard one on deer, especially in past weeks as fawns join the carnage.

Though there are no solid numbers that show all the car-killed deer — many such collisions go unreported —the reported crashes are at 165 on highways in Barron County so far this year, according to the Barron County Sheriff’s Department.

“There seems to be an uptick in car-killed deer on some of the major highways,” said Kevin Morgan, local wildlife biologist with the Department of Natural Resources.

“Highway 8 seems to have new deer fairly frequently, as do Highways 63 and 53.”

What happens with disposal of those deer is a matter of where the collision occurred. Whether on state, county or town roads, the state and Barron County have taken a more natural decomposition approach by having the deer pushed to the far edge of the ditch right-of-way, where the animal is out of sight as it decomposes or is fed on by carrion eaters such as crows and eagles.

Though the state and county have different deer recovery contractors in Barron County, the county highway system uses basically the same approach.

“We have separate contractors but both follow kind of the same process. They push the deer off the roadside,” said Mark Servi, Barron County Highway commissioner, of the county’s contractor Certified Removal of Ashland.

Contractors have two working days to deal with deer.

Townships also have their own discretion of how to handle dead deer, but will also follow the “push off” approach, which is a money saver in all instances.

Bush said that in instances where deer cannot be simply moved to the far edge of the high highway right-of-way, they are either taken to an approved landfill or used as animal feed at big cat sanctuaries or a zoo.

A driver’s reporting of a car-hit deer is not always required but is always helpful. It will help in the safety aspect of getting the deer off the highway or road shoulder and in deer population estimates.

Once the deer is reported, whether by the driver, a passer-by or a highway department worker, the deer is spray-painted orange to indicate it has been reported for pickup.

As much information as possible should be given, such as the road and the exact location on that road.

The law requires that a report is filled out if the crash results in personal injury or damage over $1,000 to personal property or $200 to government property, said Ron Baures, a Barron County Sheriff’s Department captain.

Baures said there are other procedures motorists should follow if they hit a deer and are reporting it.

“Motorists should get the vehicle safely off the road and stay buckled up. If the deer is injured they should not attempt to move it,” Baures said.

If the deer is still alive, a sheriff’s department officer will dispatch it.

To avoid collisions with deer, Baures said there are several steps drivers can take.

• Be vigilant for deer, especially in early morning and early evening. Slow down and eliminate distractions.

• Don’t swerve to miss a deer because you can actually lose control of the vehicle and cause more damage or injury.

• Stay within your lane.

Baures added that even if one deer has crossed the highway, there’s usually one or more that may be coming onto the highway in the same spot.

The procedure has been simplified for motorists who want to legally take the deer they have hit and killed. The DNR’s non-emergency number for taking possession of a car-killed deer is 608-267-7691.

The line is staffed daily from 7 a.m. to 10 p.m. Outside of those hours, the caller should leave a voice message with their first and last name spelled out, a call-back number, the deer location (road name, town, county) and whether the deer is a buck, doe or fawn.

By leaving the voice message, the caller is authorized to take possession of the deer, but must take the entire carcass.

If the driver does not want the deer but someone coming upon the scene does, that person can follow the same procedure.

The process is the same for car-killed turkeys but not for bears. A motorist killing a bear and wanting to take possession of it can call the same non-emergency number but must then wait for a tag to be issued by DNR law enforcement.

Reports of deer-vehicle collisions in Barron County have been dropping over the past several years, according to sheriff’s department statistics.

But at the same time, the deer population is deemed as high in many parts of the county, and the Barron County Deer Advisory Council is currently in a strategy to reduce the herd.

For this year, the 165 reports of deer/vehicle crashes in Barron County midway through June may seem low, and it may indeed follow the downward trend, but the entire summer remains before the high crash months in fall.

“The major concern for Wisconsin motorists is in May and June during spring fawning and in October and November during the rut,” Baures said.

The low months were January through April at about 1,000 each, and again in July, August and September, all just on either side of 1,000.