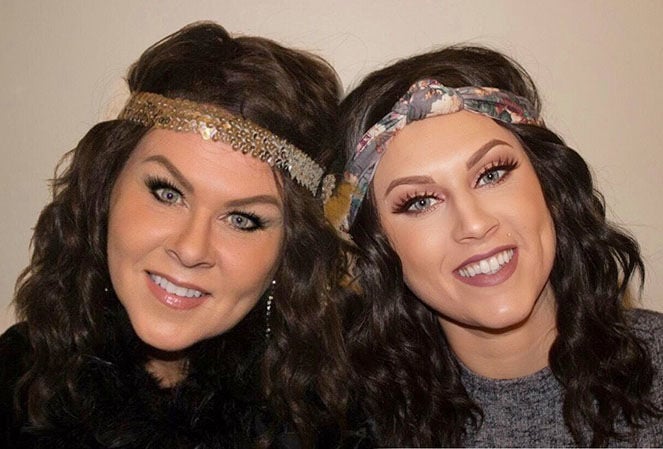 The resemblance remains striking for Lana Anderson, left, and her daughter, Megan, in a photograph taken this year. 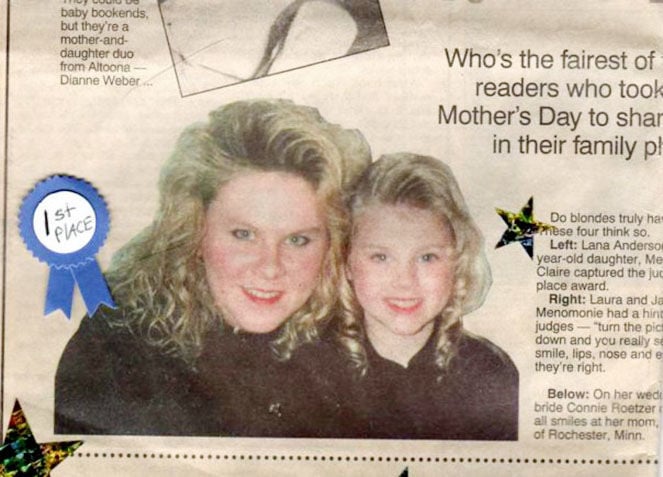 A clipping from the Sunday, May 8, 1994, edition of the Leader-Telegram shows the first-place winners from a look-alike contest — Lana and Megan Anderson.

The resemblance remains striking for Lana Anderson, left, and her daughter, Megan, in a photograph taken this year.

A clipping from the Sunday, May 8, 1994, edition of the Leader-Telegram shows the first-place winners from a look-alike contest — Lana and Megan Anderson.

Much has changed since 1994 — video stores and telephone cords are now nearly extinct; taking pictures of ourselves has become not only accepted but celebrated behavior; and the number of Starbucks locations has increased from 425 to nearly 30,000.

But for Lana Anderson and her daughter, Megan, at least one constant has remained: their likeness to each other. It was on Sunday, May 8, 1994, when the Andersons won a Leader-Telegram Mother’s Day contest, which asked readers to submit photos in which mothers and daughters looked alike. With blond, curly hair, Lana, 30 at the time, and 5-year-old Megan took first place.

“My mother took the photos of us and I got them submitted just one hour before the deadline,” said Lana, now 55, who lived in Eau Claire at the time of the contest. “In fact, I had to ask off early from work to do so, but it was worth it.

“That was back in the day when we had to run and buy film ... then take the photos ... then get them developed ... and then run the print to the Leader-Telegram.”

Judges at the time described their resemblance as “uncanny.” Although they’re brunettes in a current picture, the adjective still applies.

“The resemblance between us is so powerful that people often ask me if I am related to Megan Anderson if they happen to know her,” Lana said. “My daughter will cross paths with people I went to school with in the 1970s and they’ll ask her if she is related to me. It’s pretty fun.”

Megan agreed that second glances are common when the two are together.

“I grew up with everyone saying my mom could be my older sister or even twin,” she said, “which is kind of nice knowing I should age gracefully.”

Lana, who now resides in Elk Mound, worked in health care in 1994 and today owns Music To Your Ears, which provides entertainment for the senior community. She’s also the caregiver of her 92-year-old mother.

Megan, now 30, is a hair stylist and makeup artist for Saylon Seven in downtown Eau Claire. A passion for the craft started early for Megan, who at a young age would put on makeup and wigs to lip-sync to songs for her parents and style her friends’ hair and makeup for proms and dance team competitions.

“During college, I would have different colored hair every other month and got a lot more experimental with makeup, and that’s when I knew I wanted to for sure go back to school and get licensed,” she said. “I had an amazing opportunity to be trained at our local Sephora, working on many different faces with a variety of brands, eventually gaining my makeup artist certification from them.”

Winning the Leader-Telegram contest 25 years ago came with a $50 gift certificate to the restaurant of the Andersons’ choice. Lana and her husband, Jeff, went to Stafne’s nightclub.

“The dinner was fantastic,” Lana said. “I then had Megan choose where she would like to have her meal and treated her to the Dairy Queen. Then she got to go to the park and we went shopping for a toy of her choice.

“So, she got to have a ‘Megan day’ with her winnings.”

“I for sure remember getting all dressed up and having my grandma take our ‘glamour shot’ pictures that day,” she said. “I was a pretty theatrical child, so it wasn’t out of the norm for me to play dress up and do makeup with my mom.”

With today being Mother’s Day, Megan offered a few words that any parent would welcome.

“I would like to thank my mom for loving me unconditionally, allowing me to explore my talents and for nurturing my creativity my whole life,” she said. “Because when you’re growing up and learning about yourself, the best thing is to have family around you who are accepting and supportive of your dreams.”