Artist Brittany Tainter posed in front of her completed Black Lives Matter mural on Thursday in downtown Eau Claire. A group of Black, indigenous and people of color that formed following George Floyd’s death designed the mural. Owners of The Lismore Hotel volunteered a large garage door facing East Grand Avenue as the canvas for the artwork. 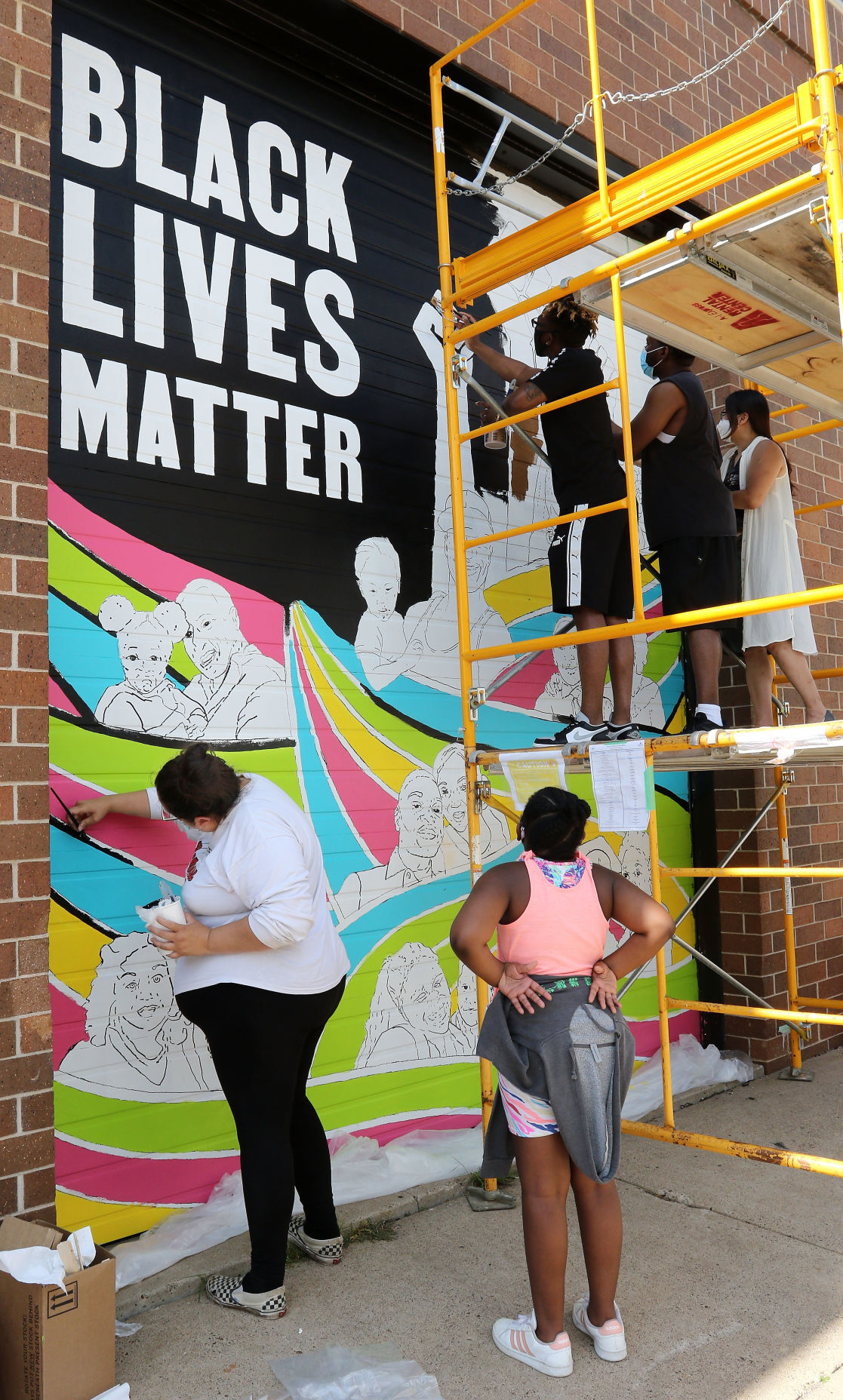 Artist Brittany Tainter, foreground, works alongside others volunteering their time on July 20. Behind Tainter is Carolina Hill, 9. Standing on the scaffolding, left to right, is Navontay Wilson, Antoine Hill and Brooke Jeein Newmaster.

Artist Brittany Tainter posed in front of her completed Black Lives Matter mural on Thursday in downtown Eau Claire. A group of Black, indigenous and people of color that formed following George Floyd’s death designed the mural. Owners of The Lismore Hotel volunteered a large garage door facing East Grand Avenue as the canvas for the artwork.

Artist Brittany Tainter, foreground, works alongside others volunteering their time on July 20. Behind Tainter is Carolina Hill, 9. Standing on the scaffolding, left to right, is Navontay Wilson, Antoine Hill and Brooke Jeein Newmaster.

With the adept hand a of painter, Brittany Tainter carefully adds the facial features of Emmett Till to a mural on a prominent downtown Eau Claire building.

Perched on scaffolding on the sidewalk along East Grand Avenue, Tainter draws the mouth, eyes and nose of the Black teenager who was lynched in 1955 in Mississippi onto the painted garage door at The Lismore Hotel.

Till is one of the 18 faces in the mural, which has “Black Lives Matter” in large letters alongside three raised fists with different skin colors.

People who died in violence or other circumstances linked to their race or minority status are shown alongside their children or parents.

“What we wanted to do was speak to the fact that all of these people who lost their lives have loved ones who are now without them,” Tainter said.

Bold waves of color — pink, green, blue and yellow — weave around the faces, but the portraits themselves are drawn only in black and white to symbolize lives taken from the world.

The mural is the work of a local BIPOC group — Black, indigenous and other people of color — that formed in Eau Claire following the May 25 death of George Floyd in Minneapolis.

“We’re just community members who needed each other,” said Brooke Jeein Newmaster, a Korean-American who helped get the group started.

The loosely organized group met a few times in outdoor settings, through online gatherings and one-on-one conversations. One of the activities Newmaster, herself an artist, arranged was setting up canvases for group members to paint on.

This allowed them to artistically express their thoughts or reflect on Floyd’s death and underlying issues of discrimination it brought to the forefront of a national discussion on race.

“It’s also an opportunity for people to have conversations,” Newmaster said of creating art.

The group talked about a bigger piece of artwork — a mural — they could create to continue in their healing process. Members didn’t have a large building wall available to them, but then owners of The Lismore Hotel learned about the project.

“Pablo Group heard that a collective of BIPOC folks from our community had a vision for a Black Lives Matter mural, and we were eager to offer a site for a mural that could also give them a relatively quick turnaround time,” said Molly Wilson, communications administrator for the business group that revamped the downtown hotel several years ago.

Among the Pablo Group’s core values is fighting for equity and equality, Wilson stated, and it seeks opportunities to elevate the voices of underrepresented people on our community.

The business attached no strings to its offer of using the garage door large enough for a delivery truck through as a canvas.

“There were no conditions,” Newmaster said.

Pablo Group did not require its approval of the mural’s design or give input into it.

“We wanted this to represent the BIPOC community’s vision, not ours,” Wilson said.

The business even helped get the necessary permits to temporarily close the sidewalk and arranged a mural consultant to give advice on the best materials to use for the large painting.

That expert wisdom came in handy for Tainter, a local artist and graphic designer who had not previously painted a mural. The garage door’s texture posed challenges as painter’s tape wouldn’t stick to it, requiring all of the clean lines between colors to be carefully done by hand.

Tainter has led the mural work, but also took input from others in the BIPOC group for its design, which took about two weeks to finalize.

Navontay Wilson, owner of Premium Blendz Barber Lounge on Eau Claire’s south side, offered his thoughts during the mural’s conception.

“I was just focused on the message,” he said. “The entire piece is just about unity.”

That was an extension of the feeling he got from the BIPOC group, which gave him support from people of other races in the wake of Floyd’s death.

Born and raised in Minneapolis, Wilson had previously been to the store that Floyd shopped at before police arrested him and an officer knelt on his neck while others stood by. A couple of weeks after Floyd’s death, Wilson and his girlfriend went to that street, which has been restricted to vehicle traffic so people could grieve, reflect and view the memorials that have popped up there.

The words that came to Wilson’s mind when reflecting on his visit to that site: intensity and community.

“You could definitely feel the intensity of emotion in the air,” Wilson said.

But in addition to that, he recalls an amazing sense of community among the people who had also gathered there to reflect on Floyd’s impact on Minneapolis.

Floyd and his daughter are among the faces in the mural that now appears in downtown Eau Claire. Others who died in police incidents — Eric Garner, Philando Castile, Tamir Rice and Breonna Taylor — are also pictured alongside loved ones in the mural.

Others in the mural had deaths that were not linked to policing.

Till is a historical example of a lynching, but a much more recent case of civilian violence against a Black man is also represented. Ahmaud Arbery died earlier this year when a group of white men shot him while he was jogging on Feb. 23 in rural Georgia.

Two other people in the mural are Black, but also represent struggles for the lesbian, gay, bisexual and transgender community.

The death of transgender woman Dominique “Rem’mie” Fells was ruled a homicide after her body was pulled from the Schuylkill River during early June in Philadelphia. Gay rights activist and drag queen Marsha P. Johnson died in 1992 in what was originally ruled as a suicide, but later changed to undetermined causes and the case remains open.

“I just want folks to remember that people are dying,” Tainter said. “These are sons, daughters and family members.”

Work on the mural began the night of July 15 when a projector was used to shine the image the design onto the bare garage door so it could be traced onto the surface.

Since then Tainter and others volunteering their time and talent have spent weekdays painting the mural. Work on it finished this week with details of the faces being the final touches. The group is now seeking donations to recoup the costs of materials it used to make the mural, as well as contributions to help pay for future art projects.

This isn’t the first time Tainter, a member of the Lac Courte Oreilles tribe, has done artwork that speaks to racial issues, but it has been the most public. With the prominent, outdoor venue and strong feelings over the Black Lives Matter movement, Tainter said, this is the most pressure she’s felt when working on a piece of art.

As she worked on the mural, there were often friends and fellow BIPOC members with her to address passers-by so she could continue painting.

The mural garnered compliments and criticism from people who have walked or driven by, Newmaster said.

“That message is offensive,” proclaimed a man as he rode by on a bicycle while Newmaster explained the mural’s origins to the Leader-Telegram.

Newmaster said responses to the artwork’s message have included racist remarks, but also others who stopped by to have a friendly conversation with the mural’s creators.

She and others in the BIPOC group want to see the Black Lives Matter message go beyond a protest, mural or conversations and turn into action to spread antiracism.

“This is just the symbol,” Newmaster said while standing next to the mural. “It’s making those changes at the institutional and structural levels that will make lasting change.”