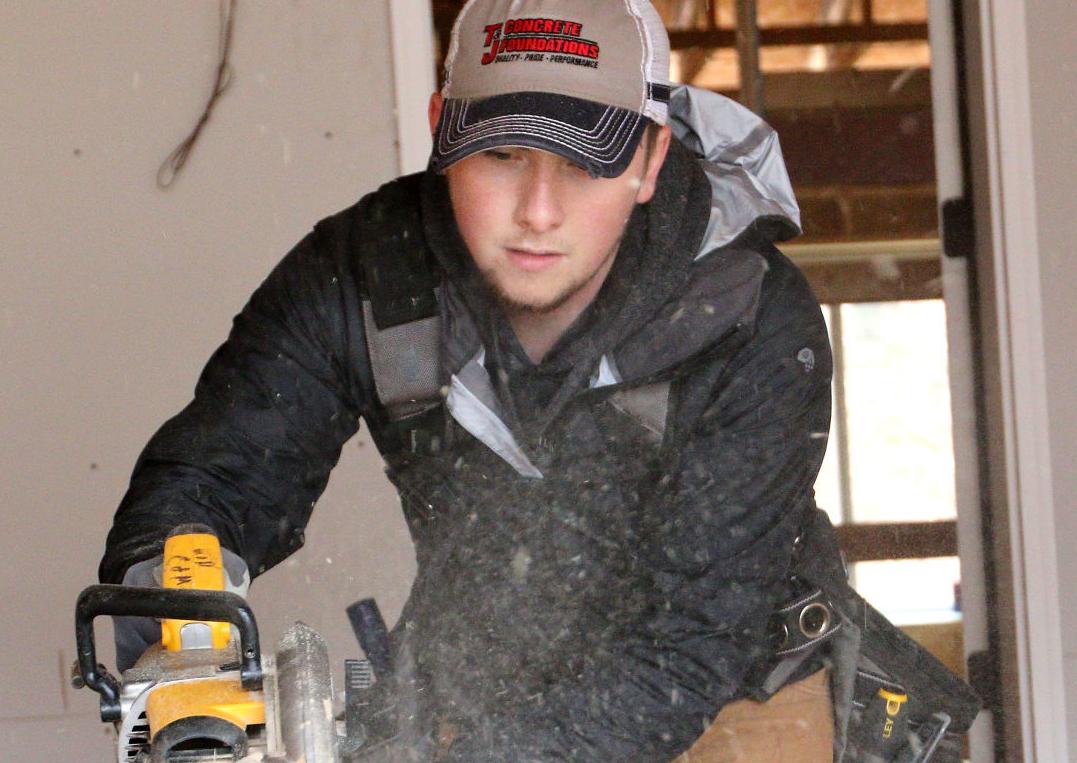 Noah Stamm of C&M Builders works on a new house Wednesday in the Highclere subdivision on McKinley Road in Eau Claire. A new report showed the city had significant growth in housing last year. View more photos at LeaderTelegramPhotos.com.

Home construction rose last year in Eau Claire with growth in single-family residences, apartment buildings and remodeling projects, based on a new report from the city.

Permits for $80.1 million in residential construction work were taken out last year in Eau Claire, up from $55.3 million in 2018, based on a development update released on Wednesday.

“I’m not at all surprised by the numbers. Last year our builders couldn’t keep up,” said Christina Thrun, executive officer of the Chippewa Valley Home Builders Association.

Contractors were booked far out, she said, as the area saw its best year for homebuilding in more than a decade.

While not reaching levels seen since the housing boom of the late ‘90s and early 2000s, the level of dwellings permitted last year were the highest number seen in the last 15 years.

Between houses, duplexes, condominiums and new apartments, there were 367 new individual dwelling units approved in 2019, up from 251 the year before.

Last year’s addition to the city’s inventory of new homes came close to the 374 dwellings built in 2004.

From 2005 and 2018, there was an average of 209 new dwellings permitted annually, based on city development reports.

Last year’s high volume of residential construction is continuing in the first months of 2020, even while much of the economy slows down due to precautions in place to slow the spread of coronavirus.

Even in recent days as many businesses have closed or sent workers home, Allen said builders continue to submit new projects to City Hall.

Like all other industries, homebuilders are delving into the specifics of Gov. Tony Evers’ order on Tuesday that only allows “essential” businesses to stay open.

Most of the building industry appears OK to continue work, Thrun said, but her association and others like it were still getting clarification on Wednesday on if some workers would still be affected.

The city’s report released Wednesday showed the average value of a single-family home stood at $354,994 last year, only $645 up from the year before.

Numerous factors go into home values including materials and labor costs, and the sizes of homes that sell well in the local market.

The city is preparing a more detailed development report due out this spring that could shed more light on why the average new home price appears to have plateaued in the last three years, Allen said.

Overall, there were permits for $171.5 million in new construction in all sectors — residential, commercial, public, nonprofit and industrial — taken out in 2019. That ranks as the fifth-highest year for Eau Claire, according to Wednesday’s report.

“Certainly last year was robust and strong in all sectors,” Allen said.

Both residential and commercial construction were up last year when compared to 2018, but the city saw fewer big projects in the industrial, public and nonprofit sectors.

The largest building project to get a permit last year was the $14.4 million renovation of the former Syverson Lutheran Home into an upscale downtown apartment building dubbed The Guild.

Coming in second is the estimated $10.5 million to build the Residence Inn by Marriott on Eau Claire’s northeast corner off the North Crossing. It is among a trio of hotels under construction in Eau Claire along with a Holiday Inn Express and Home2Suites.

And the third largest construction project of 2019 was $9.96 million in upgrades at the city’s Water Treatment Plant.