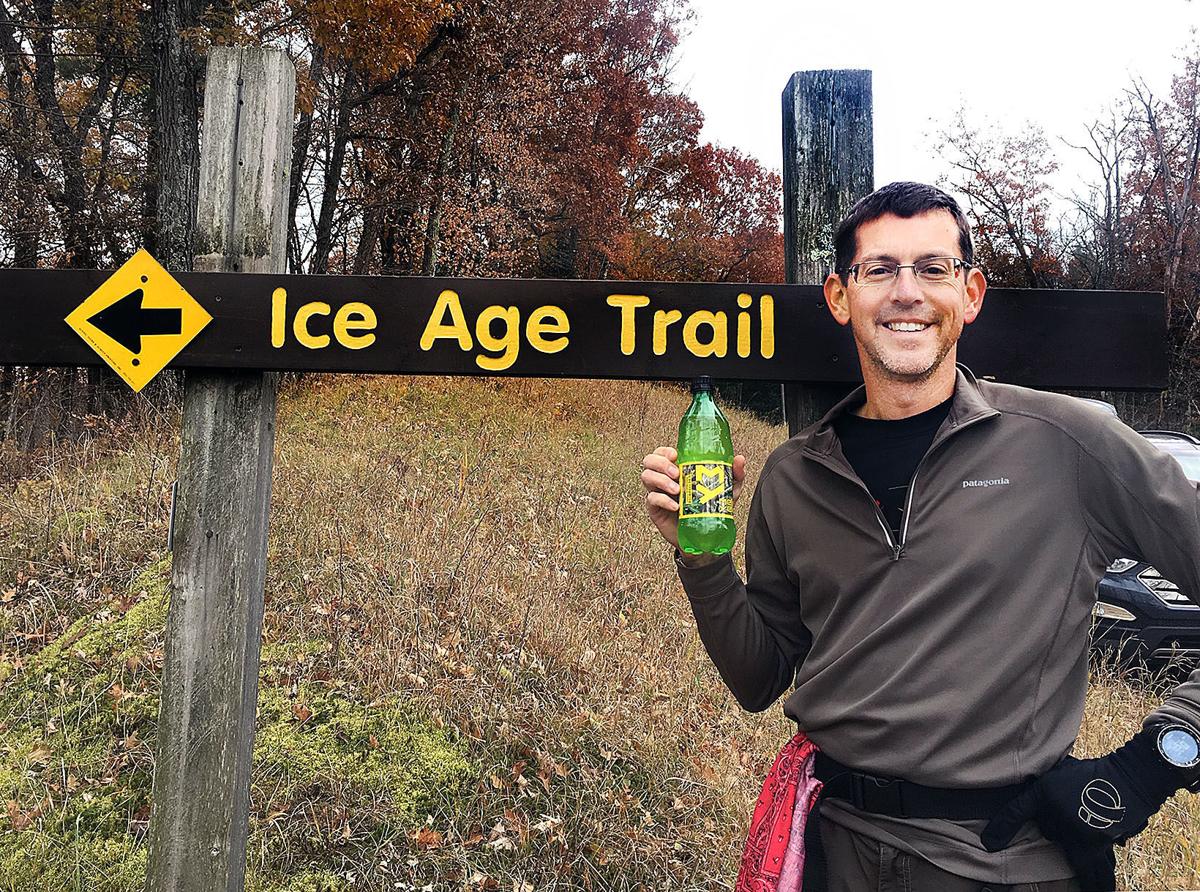 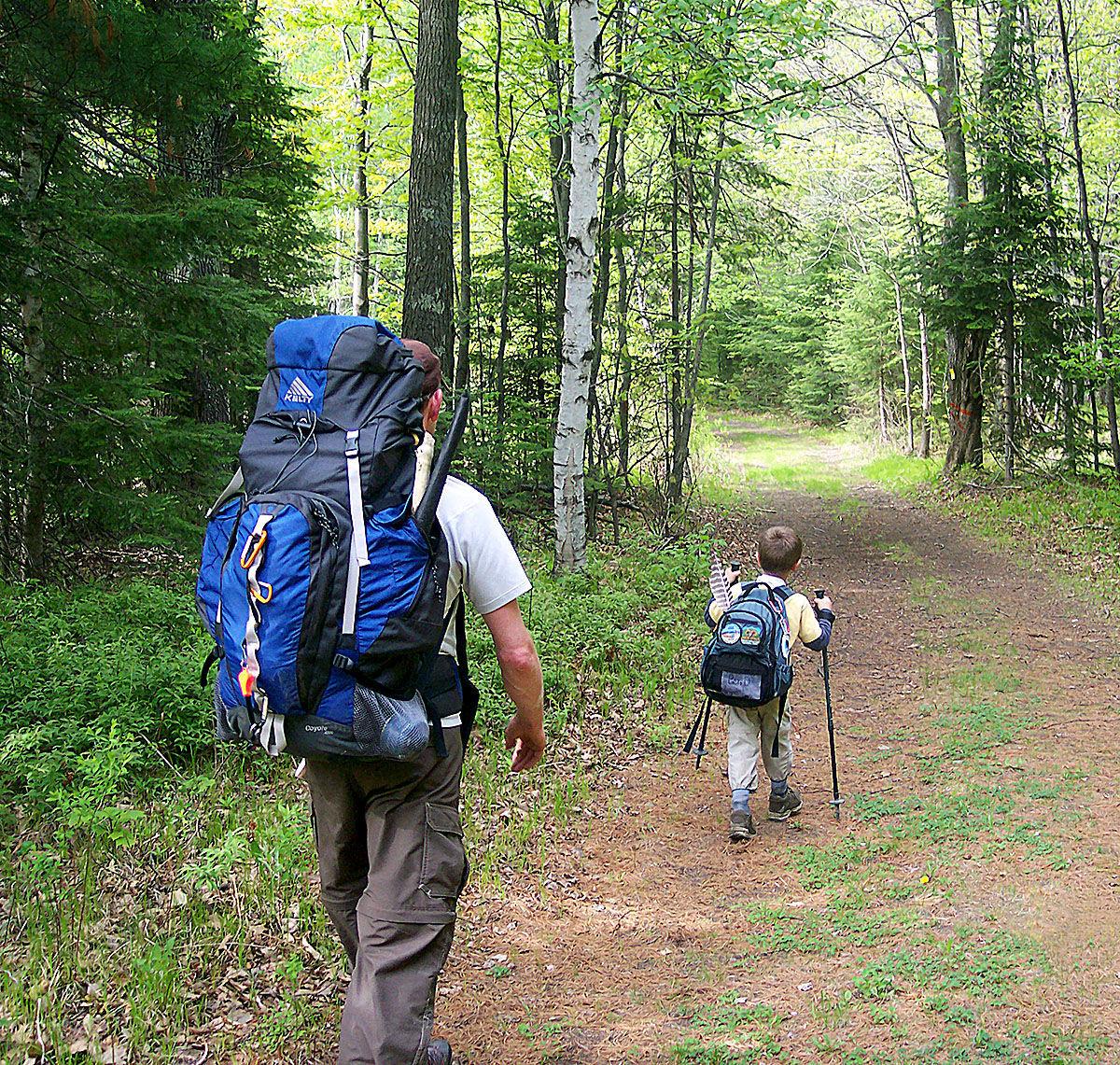 Jeff Dohlby and his son, Ben, backpack on the Ice Age Trail as they make their way through the Langlade County Forest.

Jeff Dohlby and his son, Ben, backpack on the Ice Age Trail as they make their way through the Langlade County Forest.

Never one to sit still for long, Jeff Dohlby’s passion for the outdoors accelerated in 1996 when he met his wife, Shelly.

The 1989 Eau Claire Memorial High School graduate who now resides in Pewaukee has run in marathons, biked in endurance races and completed Ironman competitions in Florida and Kentucky.

His most newsworthy achievement, however, occurred in October. That’s when Dohlby became the 185th hiker to complete the Ice Age Trail. The circuitous path runs for more than 1,000 miles from St. Croix Falls to Sturgeon Bay.

“It courses through not only extremely diverse terrain, but also through the friendliest population in the country,” said Mike Wollmer, executive director and CEO of the Ice Age Trail Alliance, which supports and protects the resource. “Trail angels abound.”

Those who complete the Ice Age Trail earn “Thousand-Miler” recognition. One member of the elite group took 50 years to complete the task and another took 42. Both were in their 60s when they finished.

“The Ice Age Trail thought began just after the birth of our son, Ben,” he said. “My wife, Shelly, and I were primarily biking and running but we needed something a little lower key that we could do with an infant.

“We started hiking with Ben in a baby carrier, then a backpack and then gradually evolved into walking all together for multi-day backpacking weekends.”

Dohlby broke the trail into 145 segments to complete the route. Challenges along the way, he said, included having enough water, protecting food from animals and “clearing hundreds of ticks off of us on a daily basis.”

“Personal challenges included just keeping the mental drive to keep going because of hilly terrain, flies and mosquitoes, blisters, heavy backpacks, crying kids or just temperamental mood swings by any of us.”

The high points, however, were many.

“One of my best memories of the Ice Age Trail was my wife and I teaching our son, who was 2½-years-old at the time, what a syllable is by singing a Happy Birthday song,” he said. “We must have sung that song a thousand times over the course of a day.”

Dohlby earned his bachelor’s and master’s degrees at Marquette University. Since 2001, he’s been managing large capital infrastructure programs such as buildings, tollways, airports, railroads and highways for a global engineering firm.

As far as outdoors pursuits, Dohlby doesn’t plan to slow down anytime soon. Bucket-list items include:

• Hiking large swaths of the Appalachian or Pacific Crest trails with his family.

• Kayaking entire lengths of rivers such as the Fox, Rock, Missouri or Colorado.

• Competing in another Ironman.

The allure of the Ice Age Trail, however, stands out for many.

“Whether you’re from Wisconsin or somewhere else, when you hike a trail like that, you get such a deep connection with the land and with the outdoors,” Melanie Radzicki McManus told the Chicago Tribune. The Sun Prairie-based writer authored a book, “Thousand-Miler,” about her experiences on the trail.

Wollmer said he and his wife met, courted and married on the Ice Age Trail.

“There are a number of such couples,” he said. “The trail remains the love of our lives, as it has become for our daughters and now grandchildren.”

“One of the coming priorities is helping my wife and son complete their pursuits of finishing the whole trail,” he said. “This will mean I get to experience several segments of the trail again and I’m looking forward to it.”