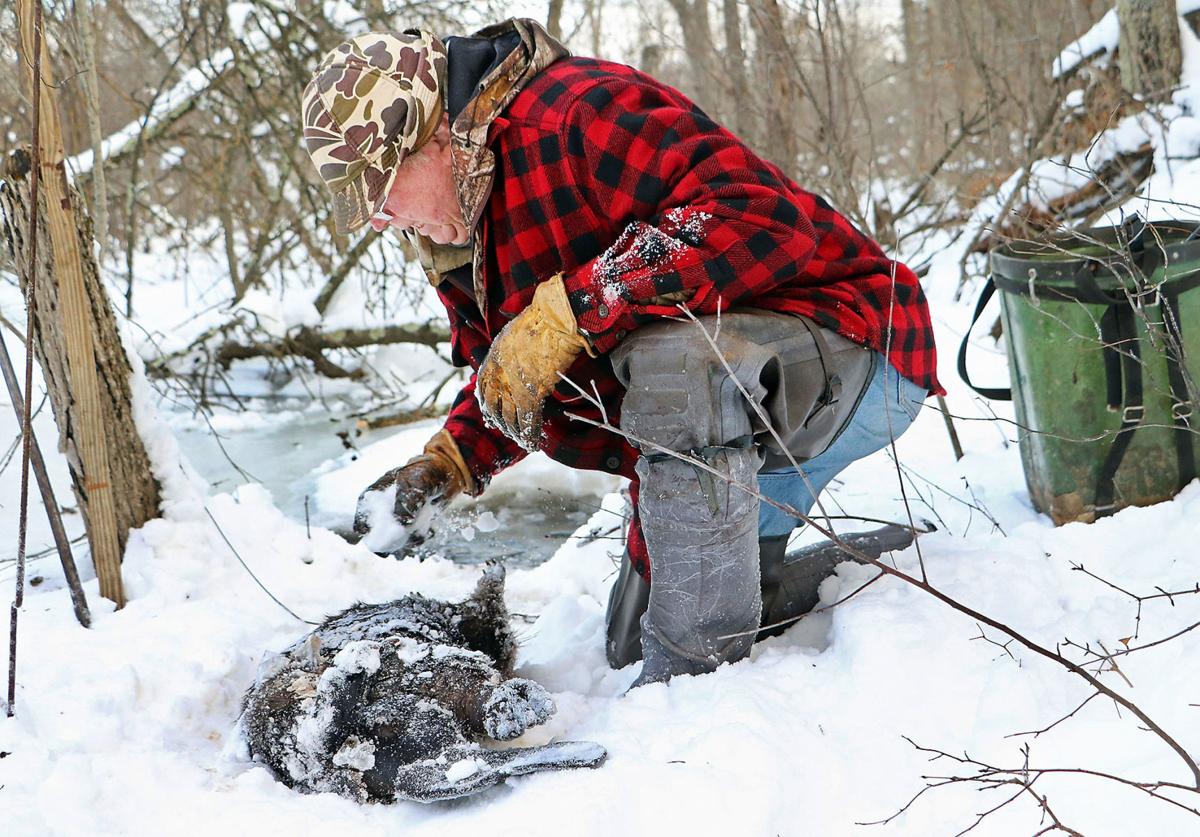 Lawrence Boettcher rubs powdery snow to dry off a trapped beaver after he pulled it from an underwater set. 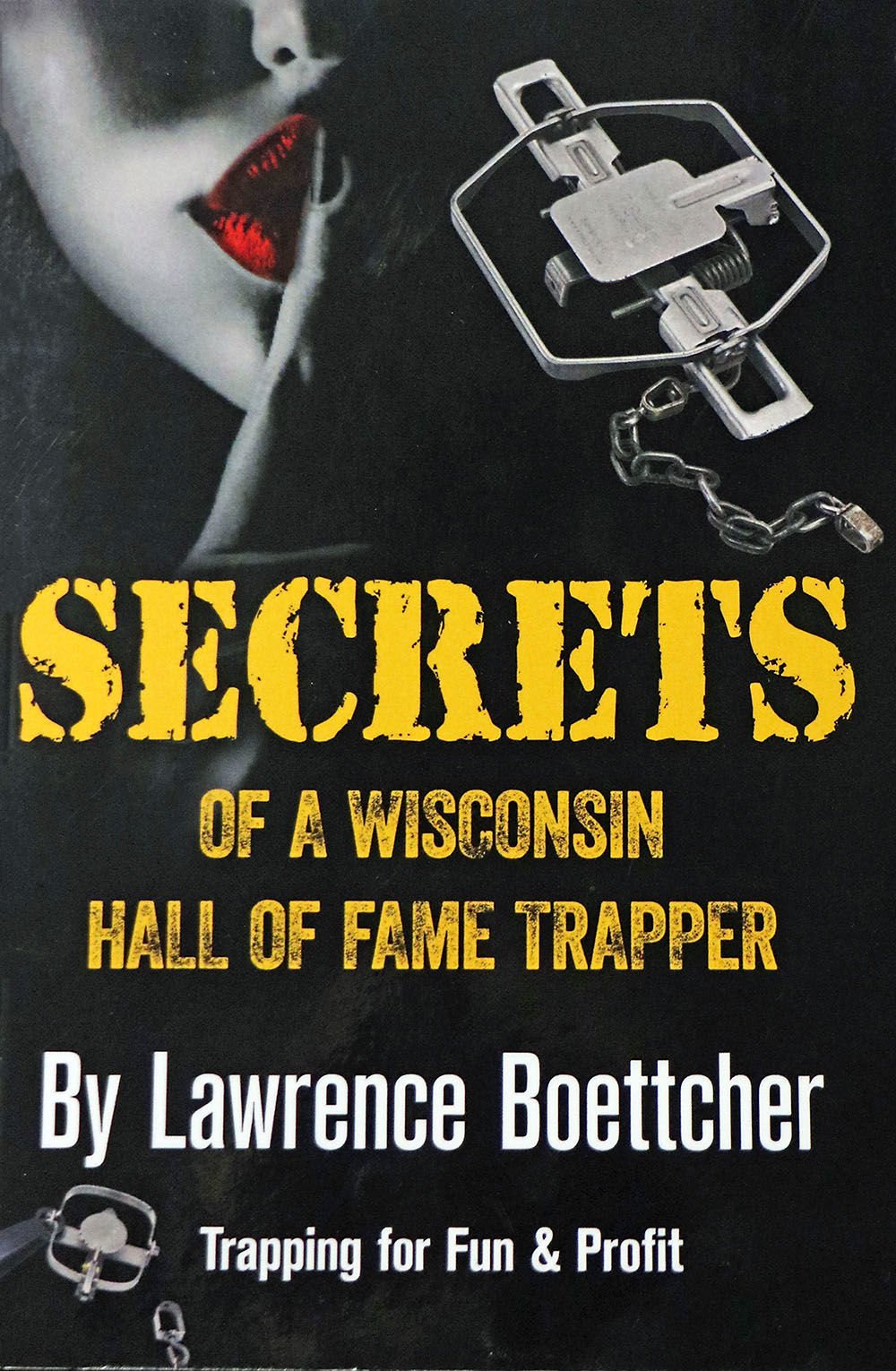 Boettcher’s new book is , “Secrets of a Wisconsin Hall of Fame Trapper.”

Lawrence Boettcher rubs powdery snow to dry off a trapped beaver after he pulled it from an underwater set.

Boettcher’s new book is , “Secrets of a Wisconsin Hall of Fame Trapper.”

RICE LAKE — Dawn had painted the horizon all around in hues of yellow, orange and mauve. The trapper takes note. But on this single-digit temperature morning on the back roads, he’s looking for white.

White as in the coat of an ermine, a weasel in winter, 7 inches or so of luxury fur.

“See that coffee can?” asks the trapper as he points to a spot 10 feet off the road in a snowy ditch. “I can see the ermine if it’s trapped.”

Lawrence Boettcher is a trapper, has been for 70 some years, ever since a neighbor, Milton Ritter, helped him get started on muskrats in the swamps of Boettcher’s childhood west of Rice Lake.

As the dryland trapping season slips into the snowy fields and icy wetlands, Boettcher shifts into four-wheel drive to check ermine and coyote traps, then straps on hip waders to get to the muskrat and beaver sets.

This winter, Boettcher has another task. He’s peddling his book, “Secrets of A Wisconsin Hall of Fame Trapper,” released this month.

“I tell trapping stories all the time. And I hear, ‘You should write a book,’” Boettcher said.

And so he did, 122 pages of biography, trapping techniques and furbearer biology, with left turns into stock car racing and Gemini IV’s space walk days. There are also plenty of photos, from the dedication to his dog, Ruger, to old churches and schools, and old-timers holding critters and fish.

In the book’s introduction, Boettcher said that 95% of the book’s story of his life is true, while 2.5% he can’t remember and the other 2.5%, well, you’ll have to read the book.

Good-natured and talkative, Boettcher has no shortage of stories, gained from the everyday toils and struggles of a full-time trapper dependent on the income of his catch to the seemingly more adventurous, romantic days of his youth trapping and hunting while logging for a living in the Western states.

Now, the days are spent along trap lines north and east of Rice Lake, and in Boettcher’s basement where critters are skinned, to his upstairs where pelts dry and hang like ties.

On this cold morning in early December, Boettcher will pick up two ermines from his coffee can traps. Between stops, he admires the colored horizon as snow buntings whirl from the shoulder of the road.

“They use the ermine for white trim, like on the royal family’s clothes,” said Boettcher, who once won 14 straight Top Lot Awards from the North American Fur Auction for the quality of his pelts.

Furs eventually make their way from trappers like Boettcher to Fur Harvesters Auction in Ontario, where buyers from South Korea, China, Turkey, Greece and other countries make their bids.

Boettcher knows more than a little about the fur business. Long before he was elected to the Wisconsin Trappers Assocation Hall of Fame in 2013, he worked for Parker Hide & Fur on West Allen Street in Rice Lake and then operated a fur buying business at his Phillips 66 gas station on Rice Lake’s North Main Street in the early 1970s.

By 1994 Boettcher was trapping full-time. Behind him were the gas stations (he also owned the Deep Rock station in Rice Lake), along with his time in the Navy, where he once escorted astronauts James McDivitt and Edward White on the USS Wasp, the recovery ship after their Gemini IV space walk in 1965.

Boettcher continues to trap full time during the trapping season, roughly October through the middle of winter. Sometimes feeling his 79 years, Boettcher said it has been a help to team up with a younger trapper, nephew Rick Dvorak.

“He can go places I can’t. I’m too old,” Boettcher says with a laugh.

Boettcher makes no apologies for trapping when it comes under fire from animal rights groups. He teaches youths in trapping classes sponsored the Department of Natural Resources, with a focus on lawful and effective techniques.

“We teach the right traps for the right animals. It’s all about being humane. Wisconsin has the strictest trapping rules in the nation, and that’s good,” said Boettcher.

For an example, Boettcher said raccoon numbers are down this year because of distemper sweeping through the local numbers. Fox, skunks and other furbearers are prone to the same threat, among other diseases.

Leaving the trail of ermines, Boettcher turns south for the Canton area, where a landowner has a colony of beavers causing a high water problem in a swamp behind his house. He heard of Boettcher, and after the first night of setting traps, the old trapper has two of what he thinks is a colony of seven beavers.

Stepping into the water, lightly skimmed with ice, while wearing hip waders, Boettcher struggles to pull out a large male beaver in a body trap. Boettcher finally bends down next to the beaver and begins rubbing snow on the fur, drying the animal.

In another trap set near swamp bank bunkers, which the beavers are using in addition to their lodge, a younger beaver is also caught. The landowners will be happy with this promising start.

Boettcher explains that the old male beaver especially likes to use the bank hole to get away from the colony.

“It’s his own man cave. Oh yeah, just like people. When the ice thickens I’ll set traps by the lodge,” said Boettcher, pointing toward the middle of the swamp where a lodge is somewhere in the tangle of tag alders.

As Boettcher finishes rubbing snow in the second beaver and placing it in his basket, he inexplicably points to the sky and shouts, “Thank you, Howard!”

Well, that’s in the book too. The young trapper misinterpreted the Lord’s Prayer, thinking “hallowed by thy name” was “Howard be thy name.” It stuck.

The reader of “Secrets of a Wisconsin Hall of Fame Trapper” will find plenty of down-home gems like this. The old trapper has a lot of old stories, 2.5% of which are, well, it’s in the book.