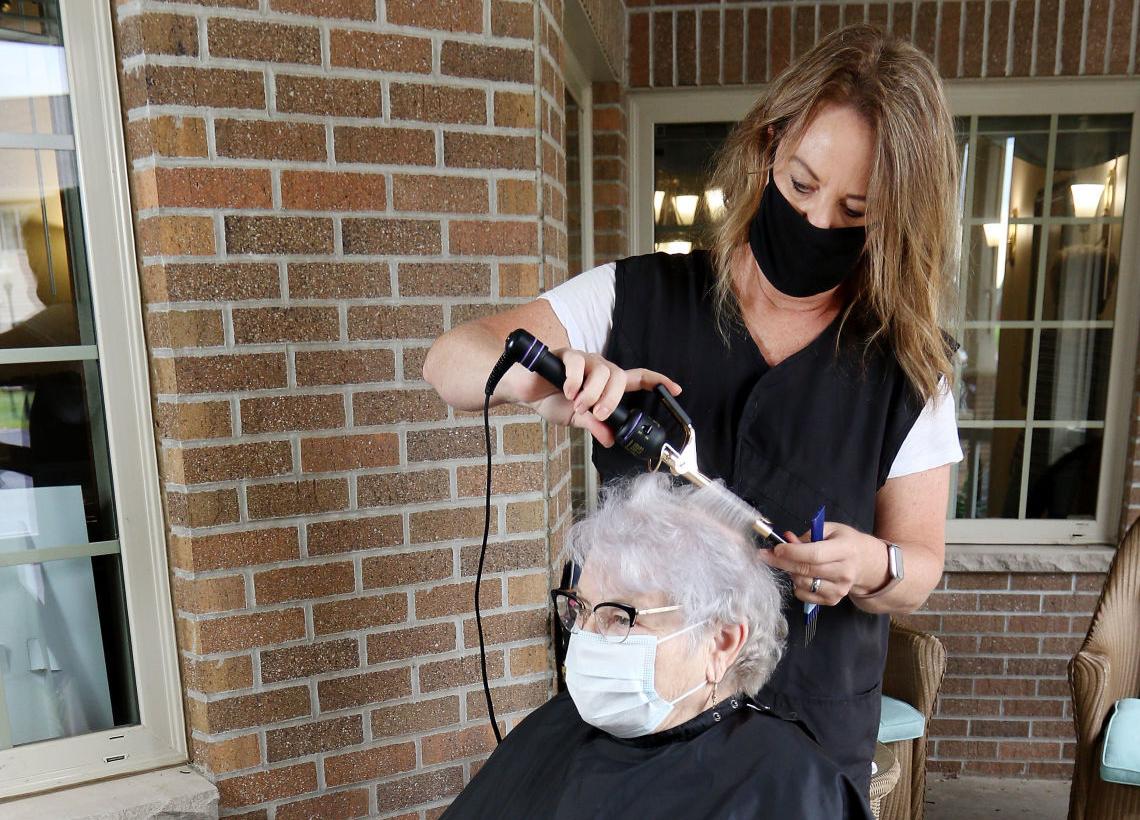 Heather Duffy of Jim Falls styles the hair Friday of resident Lil Zoromski on the front porch of Wissota Place in Chippewa Falls. Duffy recently resumed working a few hours a week after being unable to serve her clients in assisted-living facilities for several months because of concerns about COVID-19. View more photos at LeaderTelegramPhotos.com. 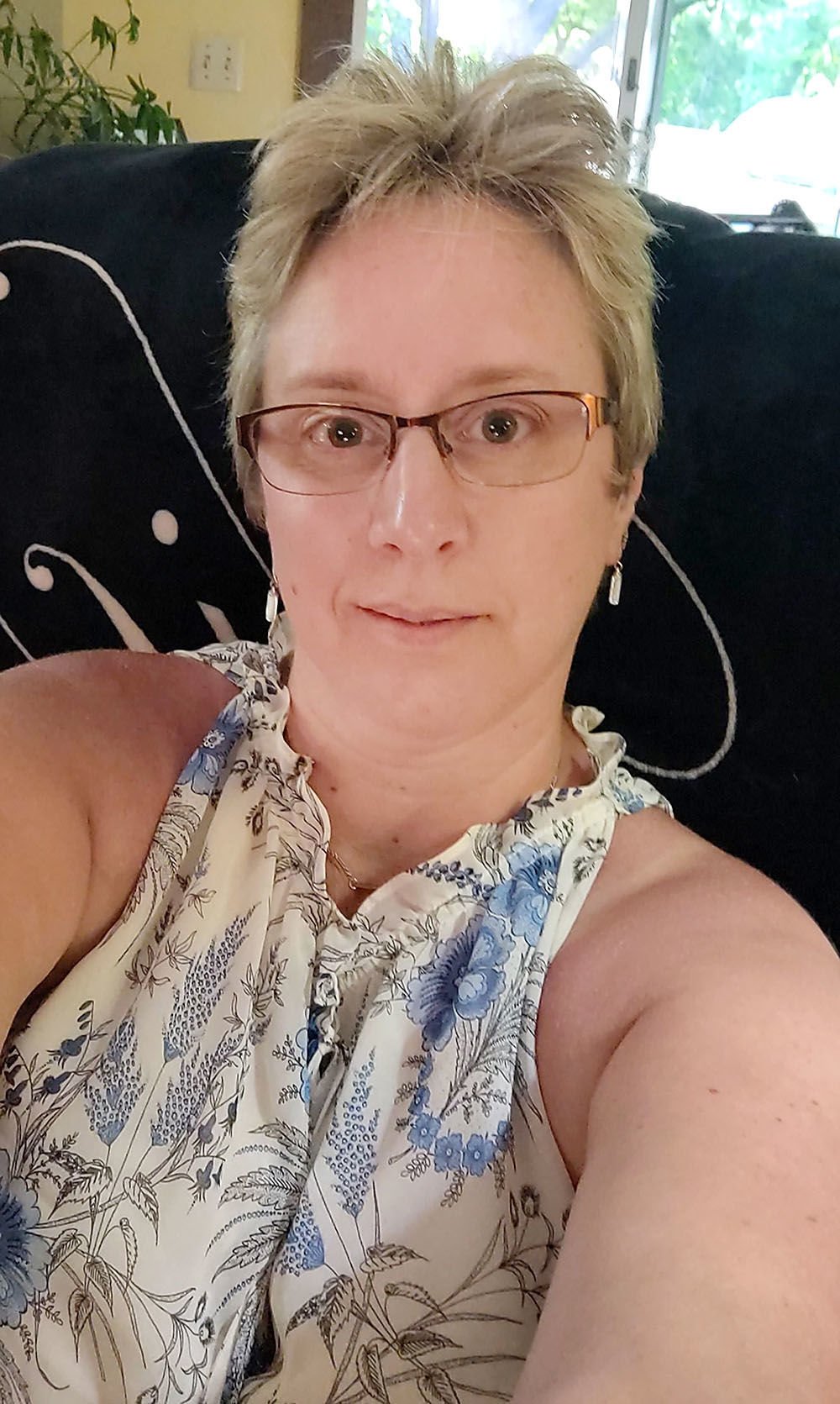 Angela Maiorana of Eau Claire has been out of work since early April when she accepted a new job only to have the offer rescinded because of the coronavirus pandemic after she had quit a longtime position.

Heather Duffy of Jim Falls styles the hair Friday of resident Lil Zoromski on the front porch of Wissota Place in Chippewa Falls. Duffy recently resumed working a few hours a week after being unable to serve her clients in assisted-living facilities for several months because of concerns about COVID-19. View more photos at LeaderTelegramPhotos.com.

Angela Maiorana of Eau Claire has been out of work since early April when she accepted a new job only to have the offer rescinded because of the coronavirus pandemic after she had quit a longtime position.

EAU CLAIRE — The economic statistics associated with the fallout from the COVID-19 pandemic can be numbing.

• The number of unemployed Americans totaled 16.3 million in July, nearly triple the 5.9 million who were out of work before the pandemic.

But for those who lost jobs in the pandemic-induced recession — people such as Heather Duffy of Jim Falls and Angela Maiorana and Cindy Walker of Eau Claire — the numbers from Friday’s Labor Department employment report are more than just impersonal reflections of the economy.

The statistics reflect the pain, deprivation and anxiety they have been feeling since their layoff and furlough notices arrived shortly after the coronavirus.

And now, after an extended wait to get the extra $600 a week in federal pandemic unemployment benefits, that lifeline has been cut for Duffy, Maiorana and Walker — along with millions of others across the country. They are left hoping that federal legislators can come to an agreement soon on a new pandemic relief bill or that they can somehow find safe employment in an economy flooded with job seekers under the invisible threat of the virus.

Here are their stories:

Duffy, 47, has been a hairstylist for 26 years, the last 11 doing the hair primarily of elderly residents at senior living homes.

The work was cut off abruptly in March when assisted-living facilities and nursing homes statewide banned visitors and all but essential employees in an attempt to prevent COVID-19 from infecting staff and residents at high risk of complications.

“Basically at the beginning of March I was told I had to leave and couldn’t come back,” said Duffy, who worked as an independent contractor at two assisted-living facilities in Chippewa County. “When you are your own boss and the only one employed, it’s really tough.”

Duffy is thankful her husband has a job but said the loss of her income still takes an emotional toll and makes it harder to pay bills.

“Thank God we did have a savings to fall back on,” she said. “You definitely want to save every penny you get.”

For the most part, Duffy said, her family hasn’t been doing much of anything this summer other than going to the store for necessities — and waiting for the pandemic to pass.

Adding to her stress, it was a struggle to get the federal pandemic aid, said Duffy, recalling that she tried calling the state Department of Workforce Development’s unemployment line at least five times a day for three months. “You don’t ever get through,” she said.

She went more than three months without getting any assistance before the $600 federal payments finally started showing up in her account. Since the program ran out at the end of July, Duffy said she is back to playing the “waiting game.” Not something she wants to build family game night around.

Through it all, several of Duffy’s regular clients have called her repeatedly to ask to have their hair done. Some are unhappy not to have the perms and coloring they have sported for decades.

“I feel bad for them, but there’s nothing I can do,” Duffy said.

Just recently she was able to offer her clients some relief, as Wissota Place, an assisted-living facility in Chippewa Falls where Duffy has practiced for the past decade, permitted her to give outdoor haircuts, while wearing a mask, a few hours a week. While she worries it could be too hot or rainy on days with appointments, Duffy said, “It’s nice to see the residents and give them a little bit of hope.”

With the local COVID-19 caseload still rising and the pandemic’s national death toll now surpassing 160,000, Duffy said the outlook for getting more hours is unclear.

“It’s kind of just day-by-day, and it doesn’t look like it’s getting better anytime soon,” she said.

Meanwhile, she is looking for other jobs even though her preference is to resume her old one.

“I’m really hoping to go back because that’s where my heart is,” Duffy said.

Maiorana, 48, was the victim of extremely unfortunate timing this spring when she accepted a new job only to have the offer rescinded because of the coronavirus pandemic after she had resigned from a longtime position.

After more than 16 years as an administrative assistant at the nonprofit Workforce Resource, Maiorana gave her two weeks’ notice to accept a higher-paying position at another employer just days before Wisconsin’s safer-at-home order took effect on March 25.

By the time the new job offer was withdrawn, it was too late to get her old job back.

That’s when the realization hit: She had intended to leave a job helping jobless people to take a job assisting low-income people, and suddenly she was the one who needed help.

To make matters worse, the unusual circumstances left her unemployment compensation application in limbo for months.

Maiorana estimated that she called the state’s jobless claims office 150 times and never even made it into the queue to talk to someone.

Finally, four months after her joblessness began, Maiorana just last week received back payments for the weeks of unemployment compensation she had missed.

“I was just so relieved,” she said.

Going without her income and any aid was a struggle, Maiorana said, noting that her family used up almost their entire savings and had bill collectors starting to call in July.

Even with her husband still working, the couple deferred their mortgage and car payments. They put off hiring someone to remove tree limbs from their yard. They canceled most of a planned weeklong trip to Yellowstone National Park, following through only on a prepaid weekend stay in South Dakota.

Looking ahead, Maiorana said she realizes they need to build up more savings for emergencies and think even harder about purchases, with the final decision coming down to a single question: “Do we really need that?”

For now, she will continue applying for jobs and hoping to find something that will mesh with the schedule of a fourth-grader who tentatively is scheduled to attend school in person just two days a week.

But with so many people out of work, the job market is tight, as evidenced by a part-time position she applied for recently that attracted 50 applicants in two days. She felt fortunate to be one of the few to receive an interview, but didn’t get the job.

As she considered the prospect of interviewing for jobs at a time when so many things are different because of the pandemic, Maiorana demonstrated her sense of humor remains intact as she pondered one common interview question: Where do you see yourself in five years?

“I bet everybody got that one wrong five years ago,” she said with a laugh.

With continued federal aid still up in the air, Maiorana said she remains hopeful Republicans and Democrats in Congress will agree on a new stimulus package that will continue some additional federal unemployment aid to supplement state benefits that are generally much lower.

The $600 a week could be a little much, Maiorana said, acknowledging she made more with the federal aid than in her old job but insisting she’d rather work than sit home collecting unemployment compensation.

“I hope they don’t cut it off completely,” she said. “There are a lot of people out there looking for jobs.”

Walker, a training and development specialist, was one of a number of people furloughed in late April by a local manufacturing company where she had worked for about a year and a half.

With business affected by the pandemic, Walker said furloughed workers were told they would be notified by the end of August if they would be recalled.

“I really loved my job, but I know there’s no guarantee I’ll get it back, so it’s a really unsettling feeling,” Walker said. “It puts me in a very tough position.”

As a single person, Walker doesn’t have any other income sources to fall back on, so she put off planned home improvements, skipped some recommended physical therapy, limited her spending to essentials only, deferred mortgage payments and tapped into a home equity line of credit to help her get by while waiting for her unemployment compensation to come through.

That finally happened in early July, but not until after she called the governor’s office and her state legislators in hopes of getting the ball rolling.

“My savings was just about tapped out, so it came through just in the nick of time,” said Walker, who saved as much as she could of the federal aid to bridge the gap as she waits to learn the fate of her job while at the same time trying to grow her skills and explore new opportunities.

“It takes a while to get a job in a good economy, and with the way the economy is right now it will be even more challenging,” she said. “It’s very concerning.”

COVID-19 cases in Wisconsin, as of Saturday