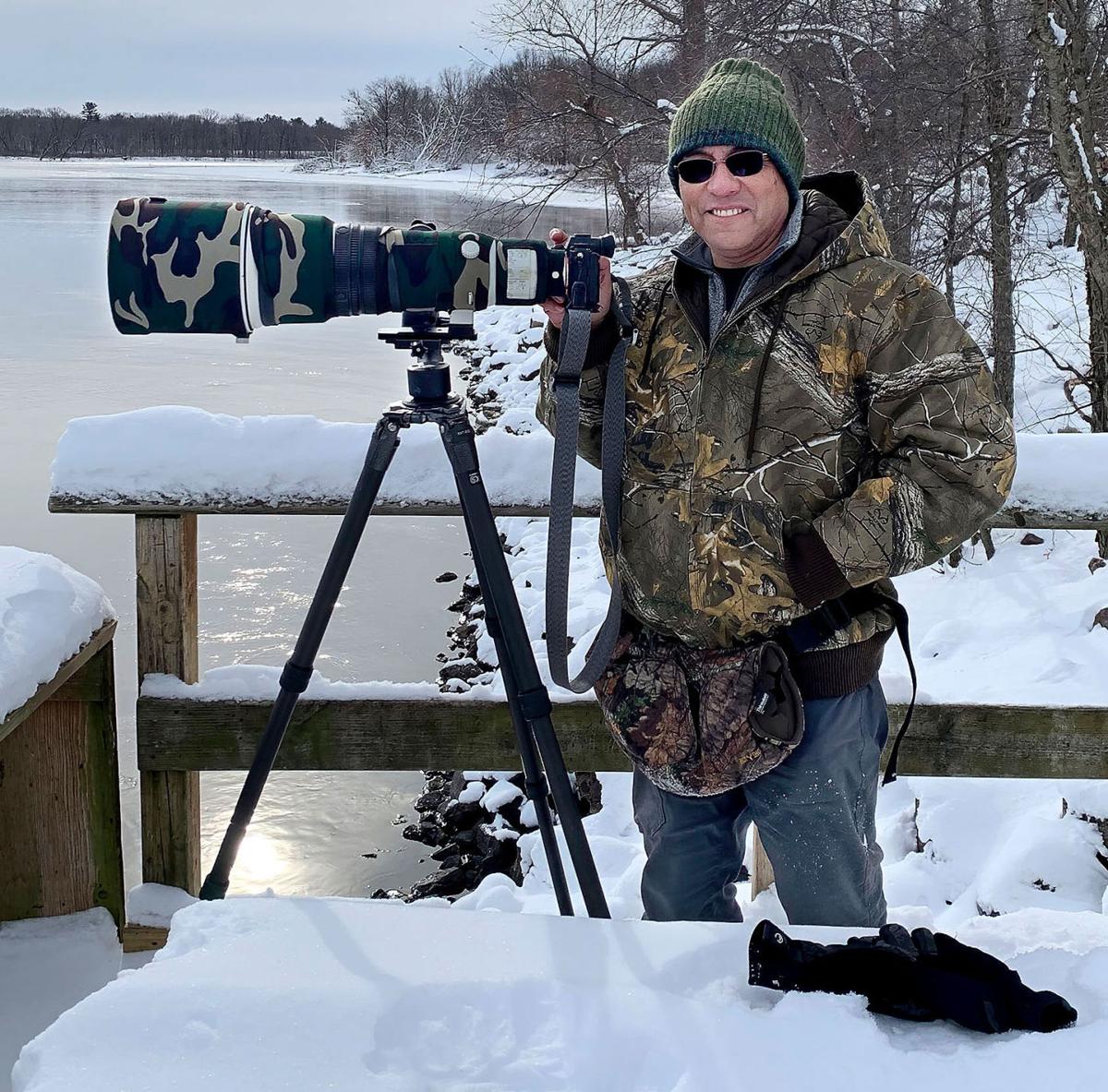 Photographer Efrain Sueldo, a native of Peru and a doctor at Marshfield Clinic Center-Eau Claire, hunts for eagle images with his camera on a recent day with minus 30 degrees wind chill in Necedah. 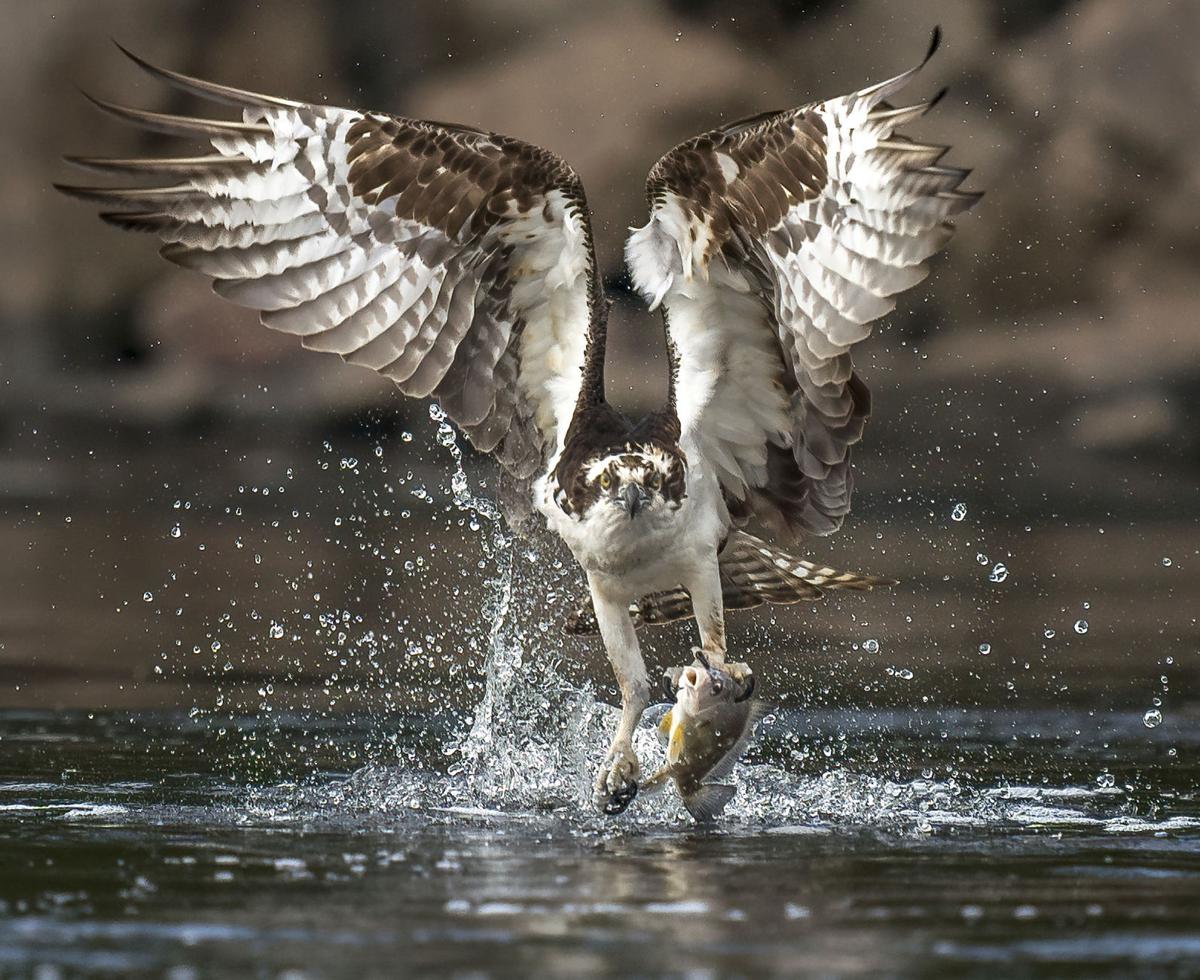 This photo of an osprey snagging breakfast in September 2019 on the Wisconsin River in Juneau County earned local photographer Efrain Sueldo of the town of Seymour a first place award in the 2020 Wisconsin Photographic Society of America Clubs Showcase on behalf of the Beaver Creek Photo Club. 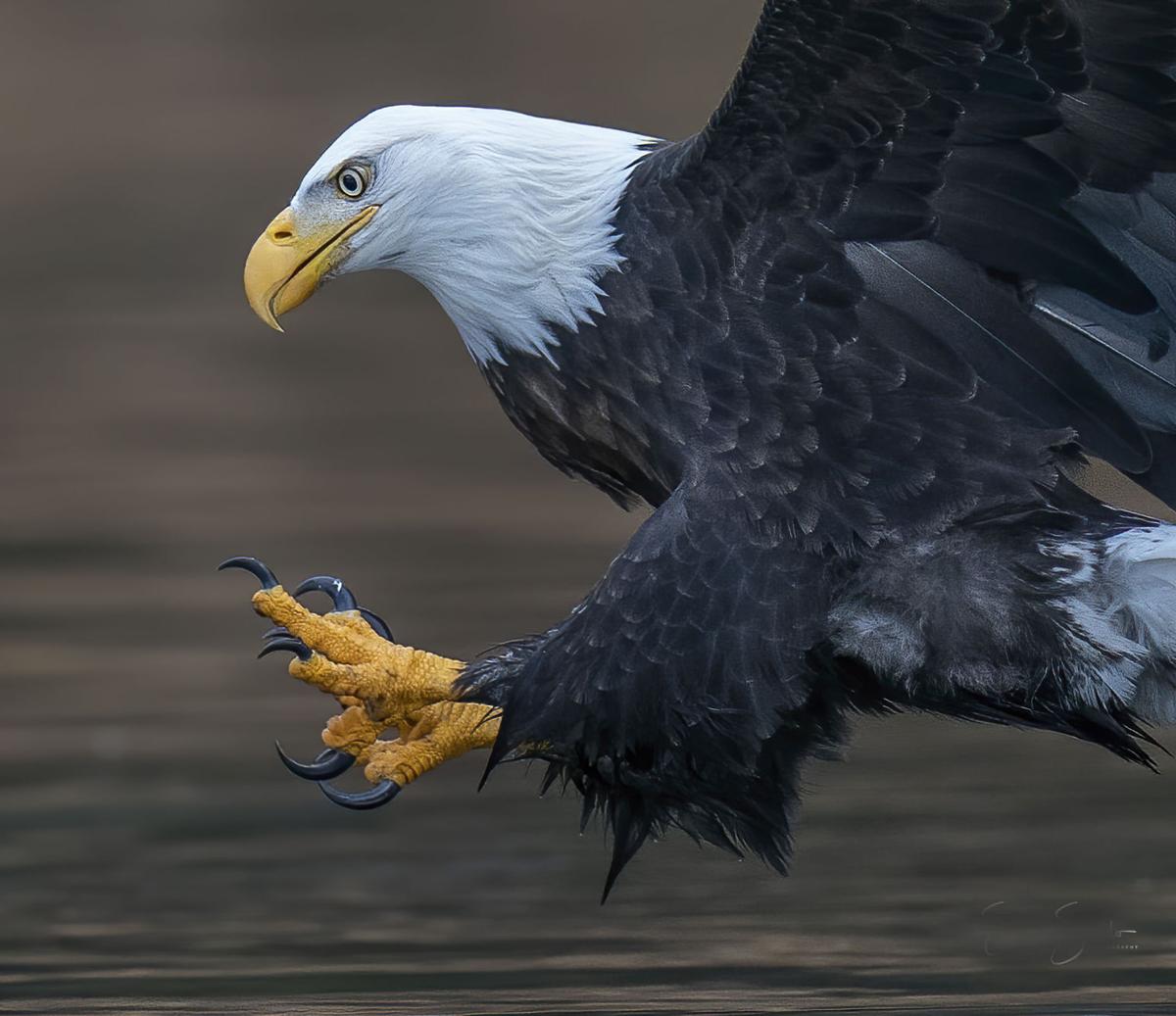 Photographing bald eagles, such as this one in December 2020 in Concrete, Washington, is a passion for Efrain Sueldo.

Above left: A bald eagle finds success in December 2019 while fishing in Concrete, Wash. Above right: A cougar is on the prowl in January. Below: Foxes spar in December. The cougar and foxes were photographed at the northern Minnesota wildlife photography sanctuary. 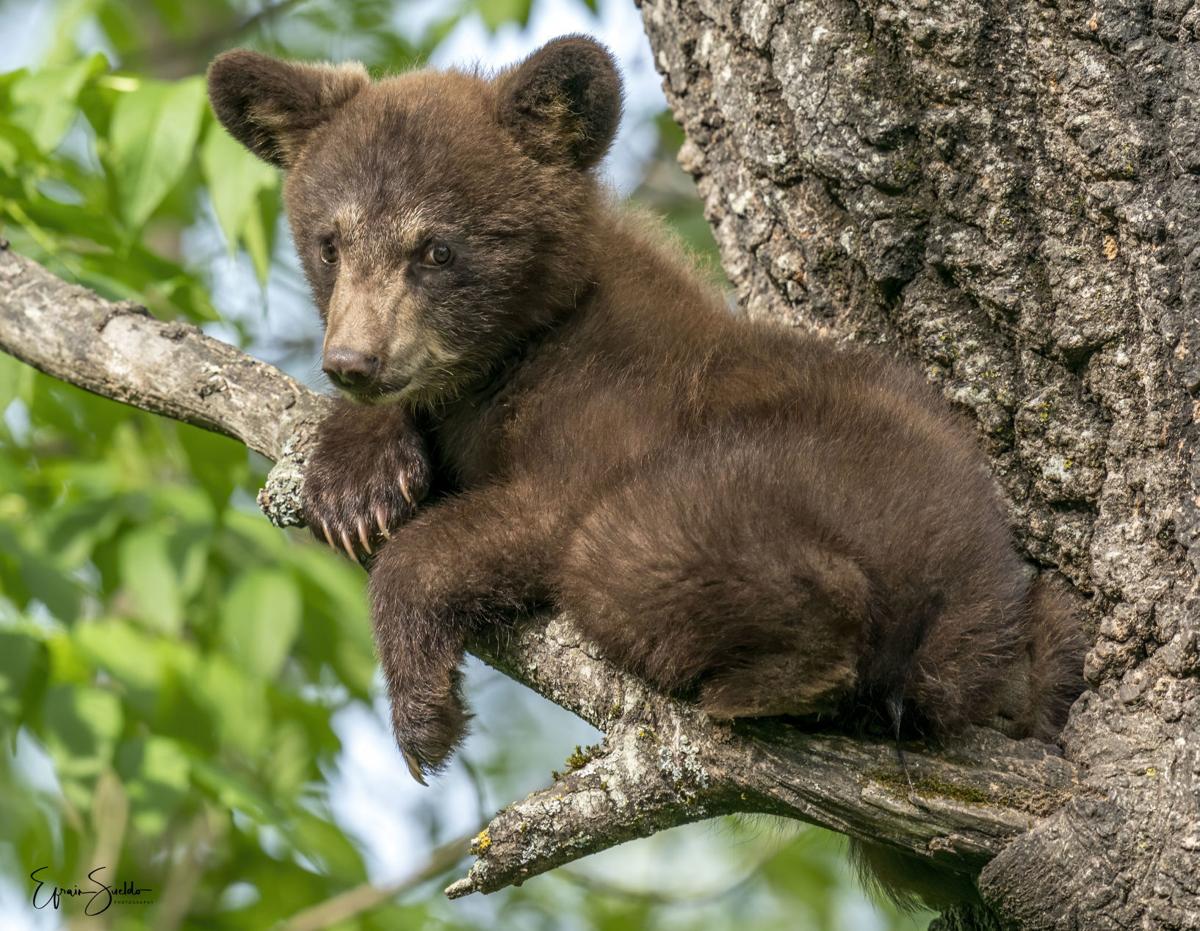 A black bear cub in Orr, Minn., takes a rest.

The physician at Marshfield Medical Center-Eau Claire bundled up with camouflage and headed outside to stalk his prey.

Armed with his weapon of choice, a Sony a9II digital camera, Sueldo took his position along the Mississippi River near Buffalo City. And waited.

With a patch of open water nearby, he knew his favorite target — the bald eagle — would visit. The only question was if his frozen fingers would still be able to push the shutter when that moment arrived.

It’s the kind of scene repeated nearly every weekend, in all kinds of weather, for Sueldo, an award-winning wildlife photographer from the town of Seymour.

“I love wildlife photography,” he said. “It is my passion.”

It wasn’t always that way. Sueldo, a native of Lima, Peru, who came to the United States in 1996 and has lived in the Chippewa Valley for 15 years, was satisfied just taking photos of his children playing sports until about a decade ago.

But as a nature lover, the idea of being able to capture high-quality images of wildlife — such as the eagles soaring over the Chippewa River he regularly spies out his office window — intrigued him. So Sueldo committed to learning how to turn that dream into a reality.

He watched YouTube videos. He joined local photography clubs. He asked questions. He acquired high-end gear. And he practiced for hours, days and weeks at a time.

The dedication has earned Sueldo, 60, a reputation as a rising star in wildlife photography.

He recently earned a first-place award in the 2020 Wisconsin Photographic Society of America Clubs Showcase on behalf of the Beaver Creek Photo Club for a photo of an osprey snagging a fish from the Wisconsin River.

Two well-known local photographers and former presidents of the Chippewa Valley Photo Club — Dennis Steinke and Tim Abraham — marveled at Sueldo’s rapid progression from beginner to expert at his craft.

“I recall not that long ago when Efrain first came to the club and was just getting into wildlife photography and really didn’t understand it all that well,” Steinke said. “Boy, he really took to it.”

“I often get up before sunrise because I know eagles like to fish right away in the morning. I bought a boat so I could get closer to the osprey fishing.”

Now, Steinke maintained, Sueldo’s eagle photos in particular stack up with anybody’s in the world.

“Efrain has got to be the best eagle shooter I’ve ever seen,” Steinke said.

“Efrain is constantly upgrading techniques and gear to be able to make photos that rival or surpass what has often been thought of as the gold standard — National Geographic,” Abraham said. “I’d easily put up his work against their best.”

Indeed, Sueldo’s close-ups of eagles, typically taken with a 600 mm lens with its power doubled by a 2x teleconverter to 24 times closer than the human eye, often show enough detail that observers easily can identify the species of unfortunate fish clutched in the birds’ talons.

Both Abraham and Steinke focused on Sueldo’s patience, persistence and knowledge as key factors in his success.

Putting in the time

Those traits are immediately evident when talking about wildlife photography with Sueldo, who studies the behavior of his subjects, networks with other photographers and researches the capabilities of his equipment to improve his odds of getting the best possible shots.

“I often get up before sunrise because I know eagles like to fish right away in the morning,” he said. “I bought a boat so I could get closer to the osprey fishing.”

Sueldo knows where to perch because he recognizes that eagles like to fly into the wind when they fish and even has learned to be on alert when an eagle poops because that usually means it’s about to take off. 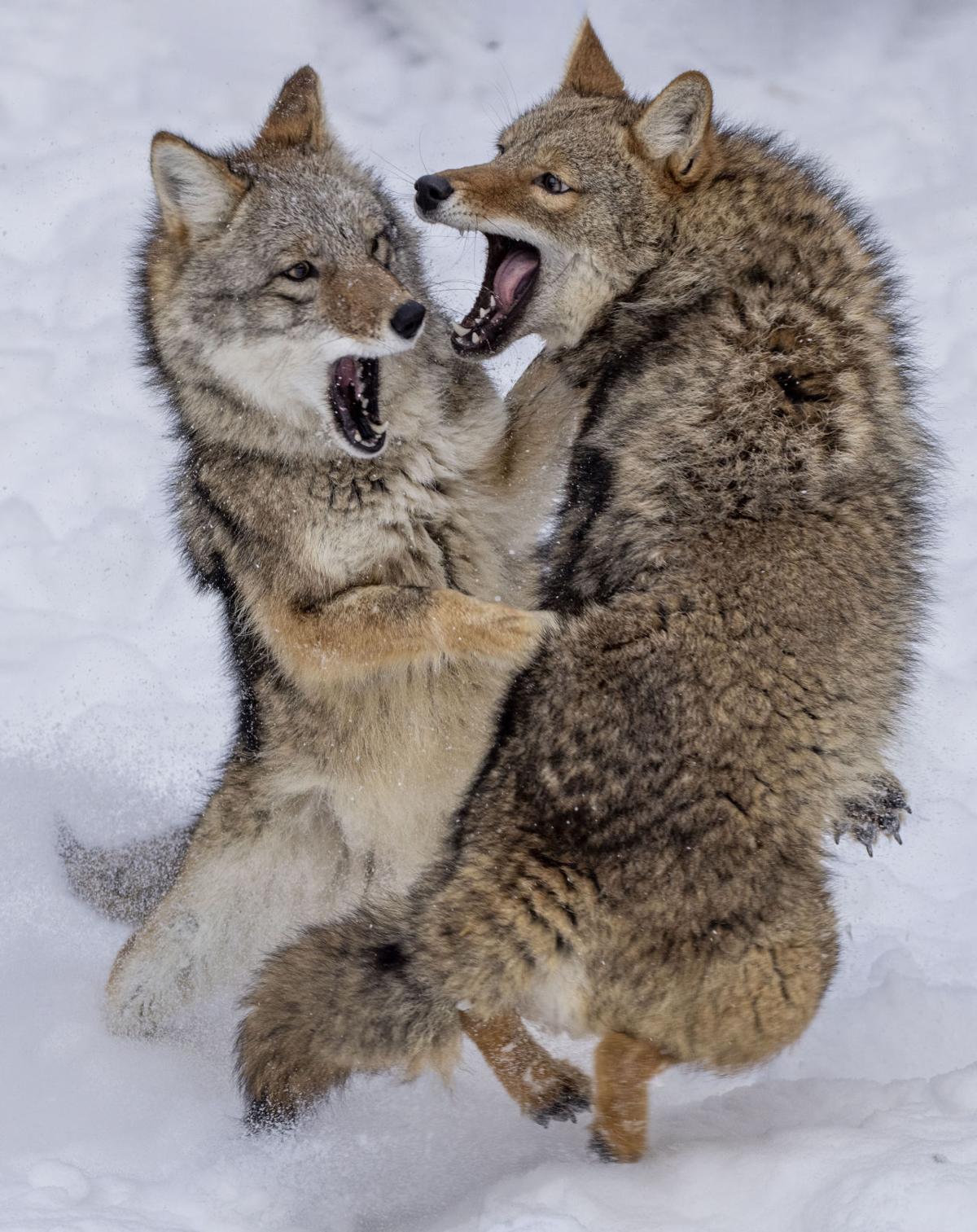 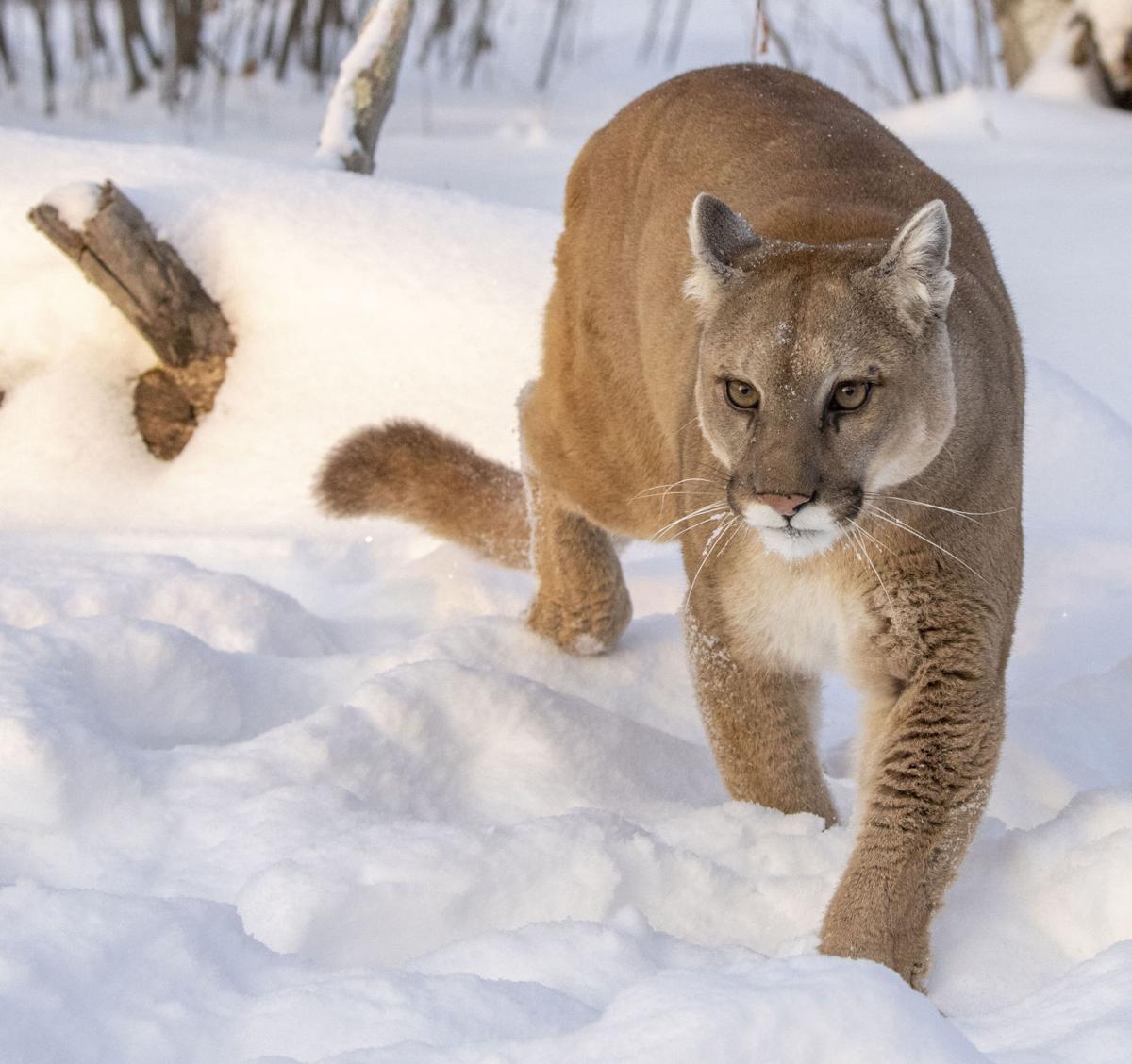 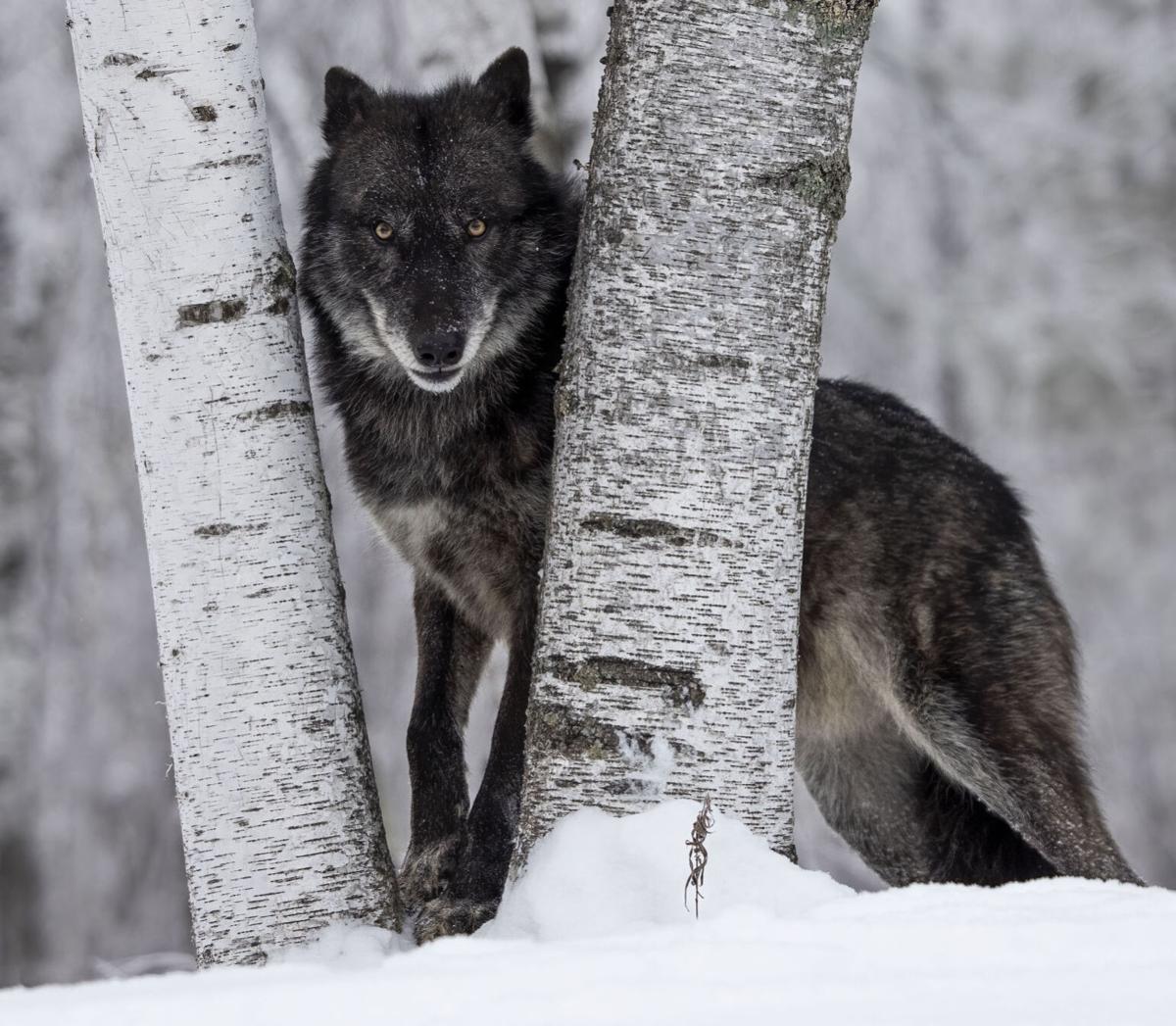 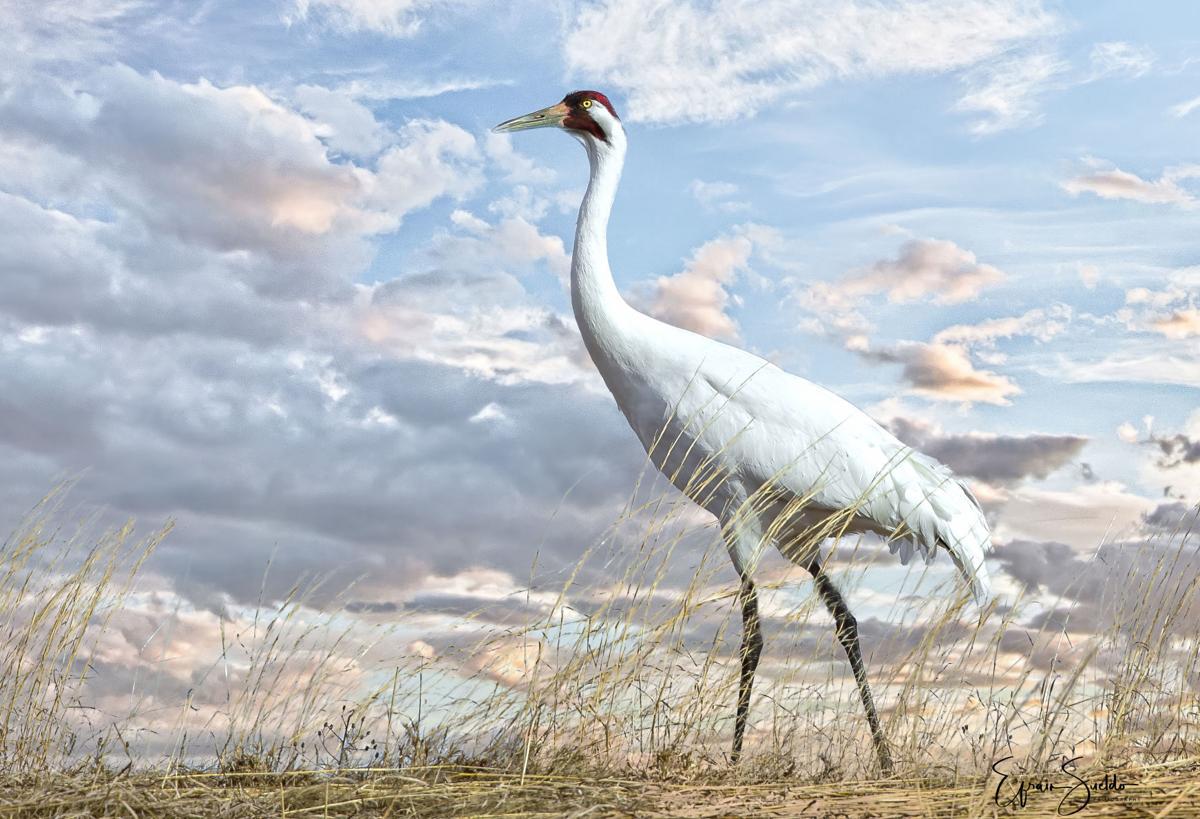 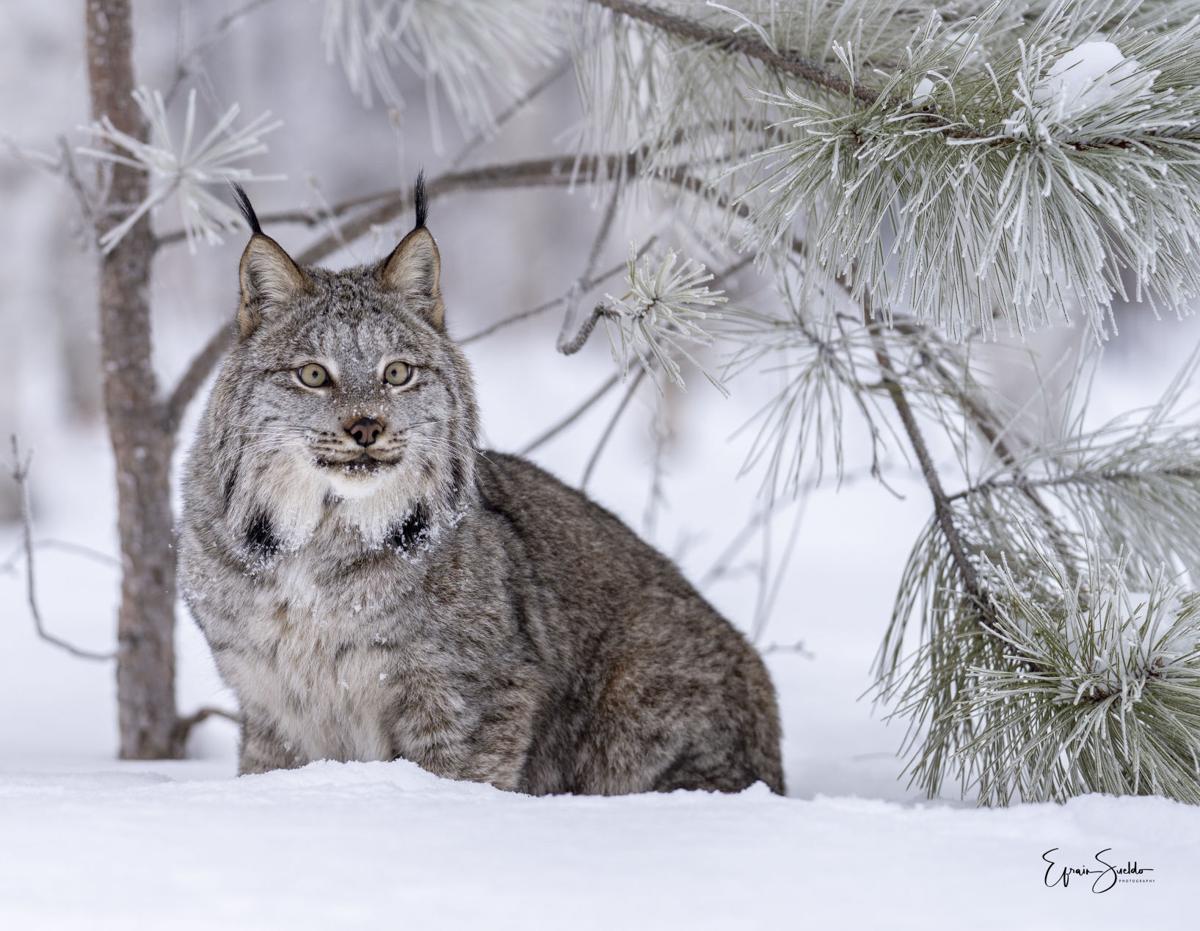 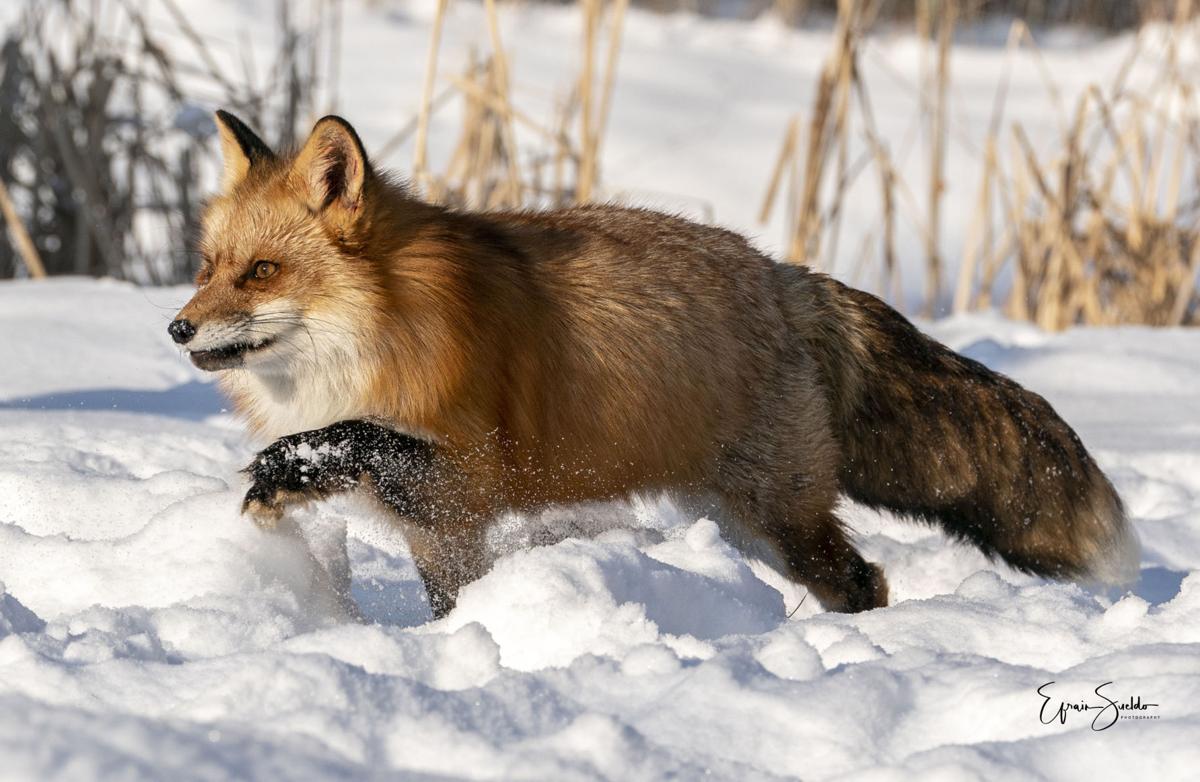 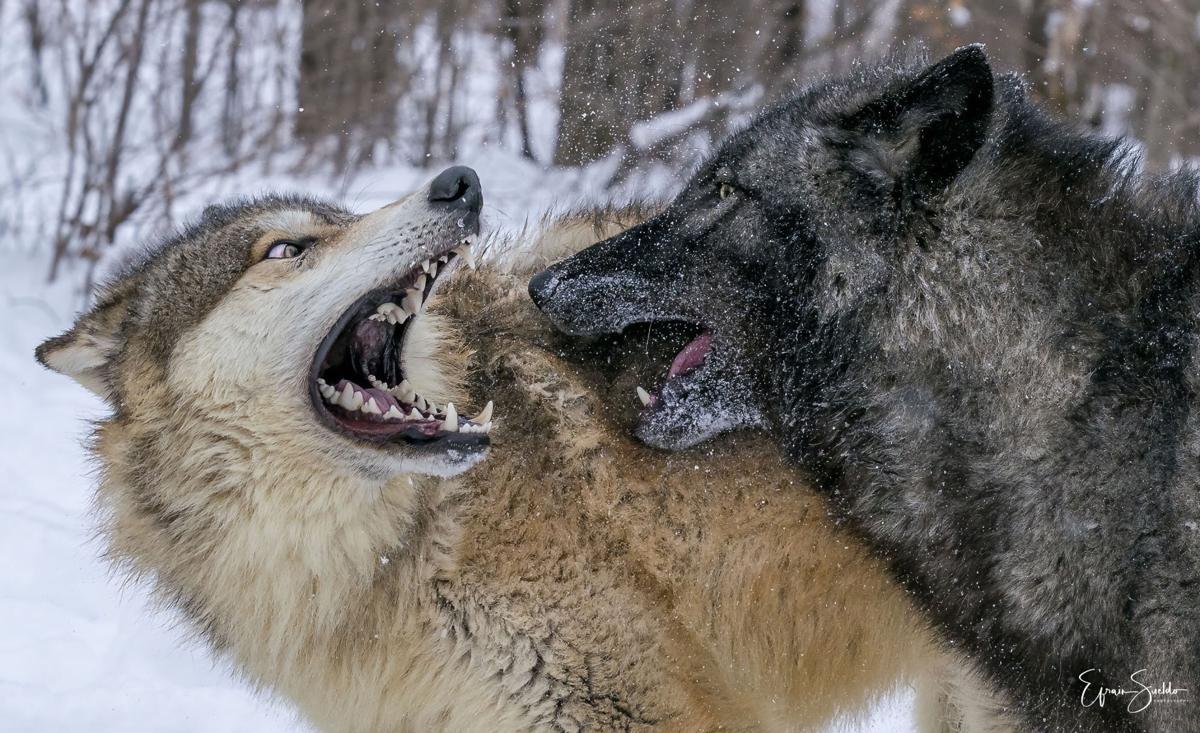 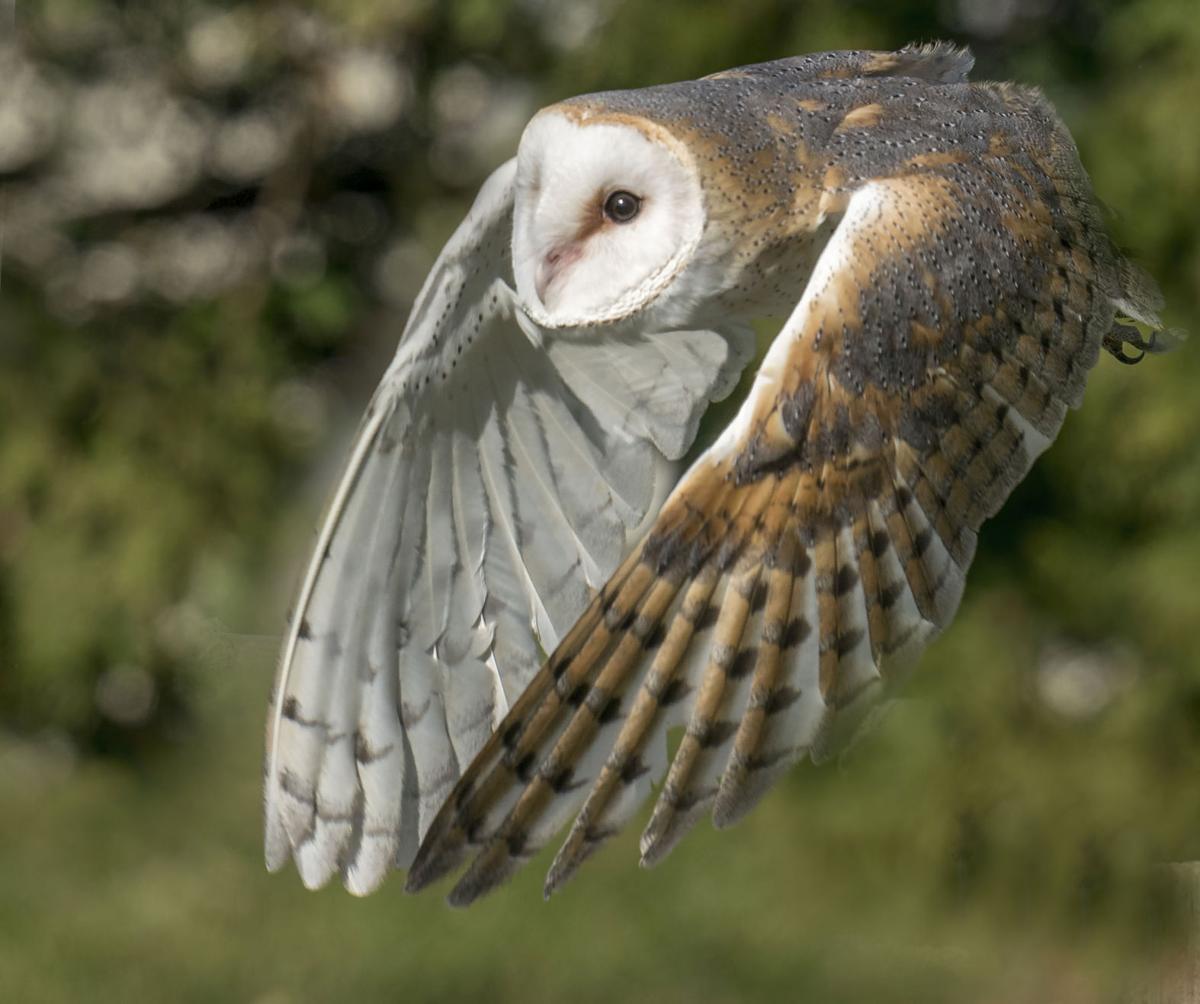 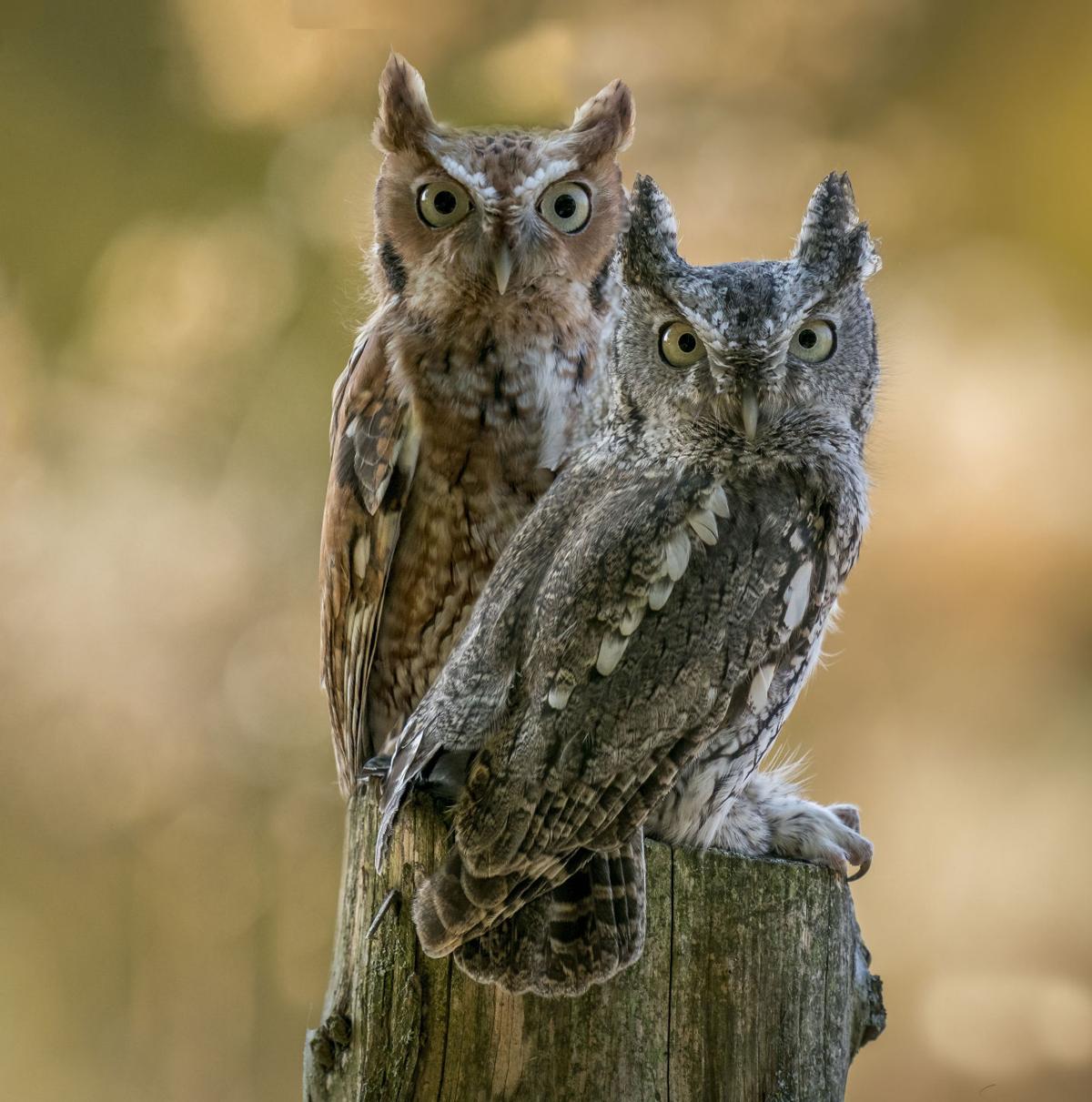 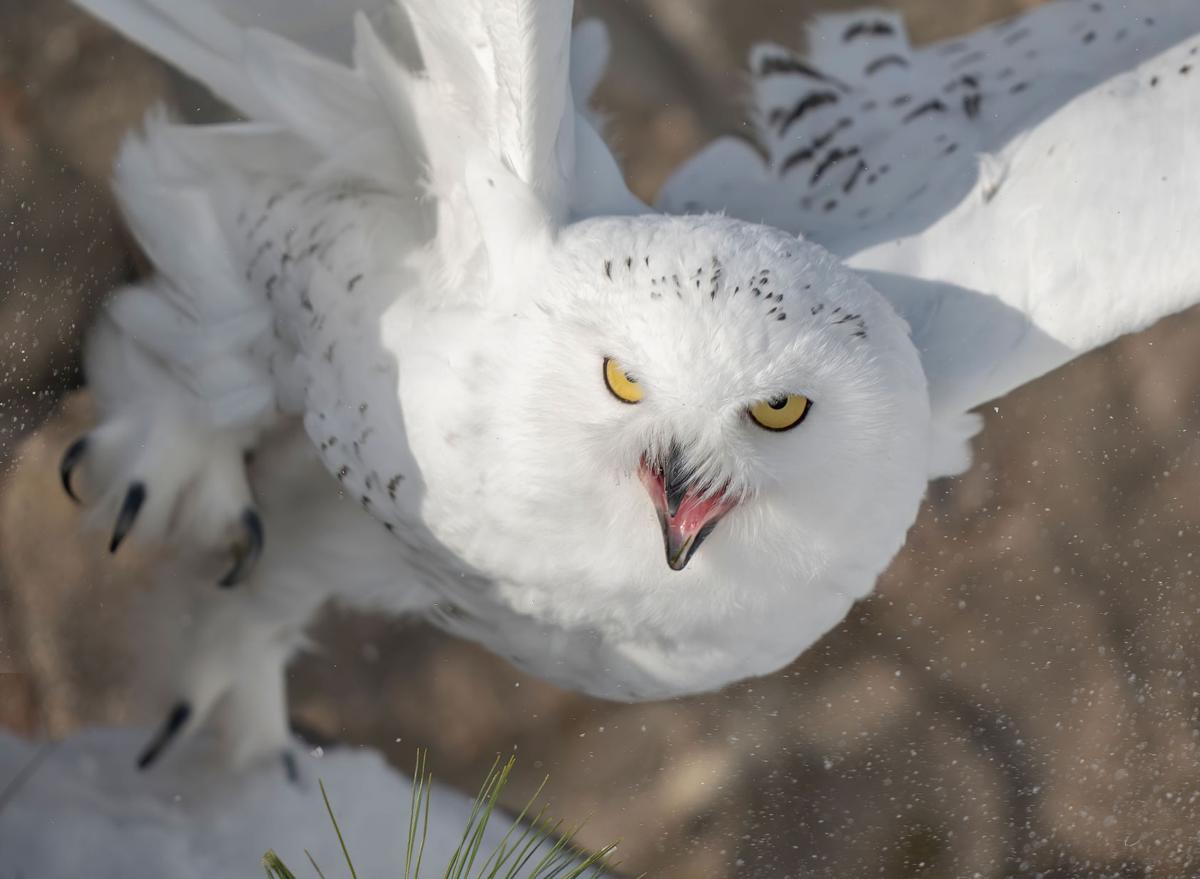 He enjoys the many challenges of wildlife photography — from dealing with extreme weather conditions to anticipating the moves of wild creatures and from being present when amazing things happen to mastering the technology well enough to capture a sharply focused image of an eagle diving at nearly 100 mph.

“Getting an image of two eagles fighting in the sky over a fish or an eagle pulling a fish out of the water, that stuff happens in a split second and to be able to capture that is incredible,” Steinke said. “Efrain does that very well.”

Photography also offers a welcome respite from the pressures of Sueldo’s day job as an internal medicine physician, a role he acknowledged has been extra stressful in the past year with the addition of a flood of COVID-19 patients.

“We’re so busy at work that it’s always a good relief to clear my mind on weekends,” said Sueldo, who has endured the additional stress of worrying about the less advanced medical care available to several relatives in Peru who got seriously ill with the virus.

While Sueldo is happy taking photos of eagles right in Eau Claire and most often shoots alone or with his wife, he recognizes that he is fortunate to have the means to occasionally travel to wildlife photography hotspots in the Midwest and around the world.

Not only has he reveled in photographing cougars, wolves, bobcats, coyotes and foxes at a northern Minnesota wildlife photography sanctuary, but he joined a photo safari to Washington to see bald eagles feasting on salmon, traveled to Alaska in pursuit of grizzly bears and moose, and visited Peru and Ecuador to take images of exotic hummingbirds.

Guides on such trips look out for photographers’ safety when they get close to large predators, although Sueldo admitted that photographing grizzlies was a bit nerve-racking.

“That was probably more risky than anything else I’ve done,” he said. “The worst thing that can happen to you is to be attacked by a grizzly. They can kill you.”

Thrill of the chase

The majority of Sueldo’s images, however, are taken closer to home.

Sueldo recently traveled with his wife, Martha Hidalgo, also a doctor and an accomplished wildlife photographer in her own right, to Two Harbors, Minnesota, on a subzero day in hopes of photographing a great gray owl.

“With it being sunny and so cold, I knew our chance of success was low, but we went anyway because my wife hasn’t seen a great gray owl for three years,” Sueldo said. “We didn’t find any owls. It was terrible. But sometimes that’s how it goes — you sit for hours and don’t get anything.”

That was Saturday. Despite the shutout, he asked Hidalgo if she wanted to go to Buffalo City on Sunday, when it was even colder, to look for eagles.

“She said, ‘You’re crazy,’ so I went by myself,” Sueldo said, adding, “This is the only way to get photos no one else is taking.”

Thanks to the great American comeback of the national symbol, Sueldo generally has better luck when chasing eagles.

That leads to hours of selecting and editing the best images after each photo excursion, but he remains undaunted.

With such incredible volume, Sueldo suggested it’s impossible to declare his favorite photo, although he conceded that eagles and other raptors are the creatures he most enjoys shooting.

It’s more about the thrill of the chase, Sueldo said, adding with a chuckle, “A friend told me, ‘Your best photo is the one you haven’t taken yet,’ and he’s probably right.”

For Sueldo, the quest for the perfect image continues, and that’s just the way he likes it.

To view more of Efrain Sueldo's images, go to efrainsueldo.smugmug.com.