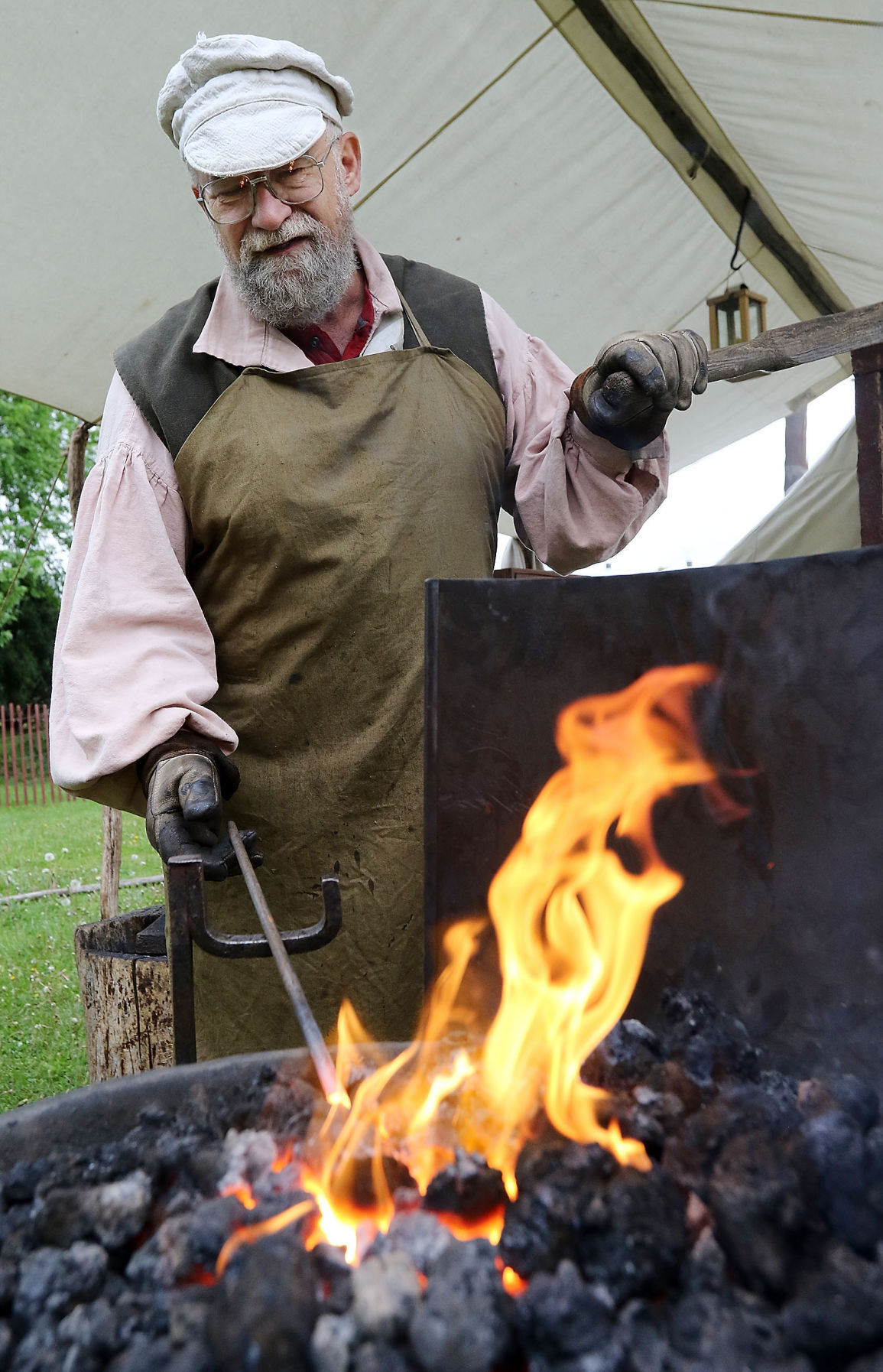 Blacksmith Terry Kruger of Mauston heated steel during the Past Passed Here in Allen Park in Chippewa Falls in 2016. The festival is relocating this year to Marshall Park, along Bridgewater Avenue, because Allen Park has flooded in recent years. Staff Photo by Dan Reiland 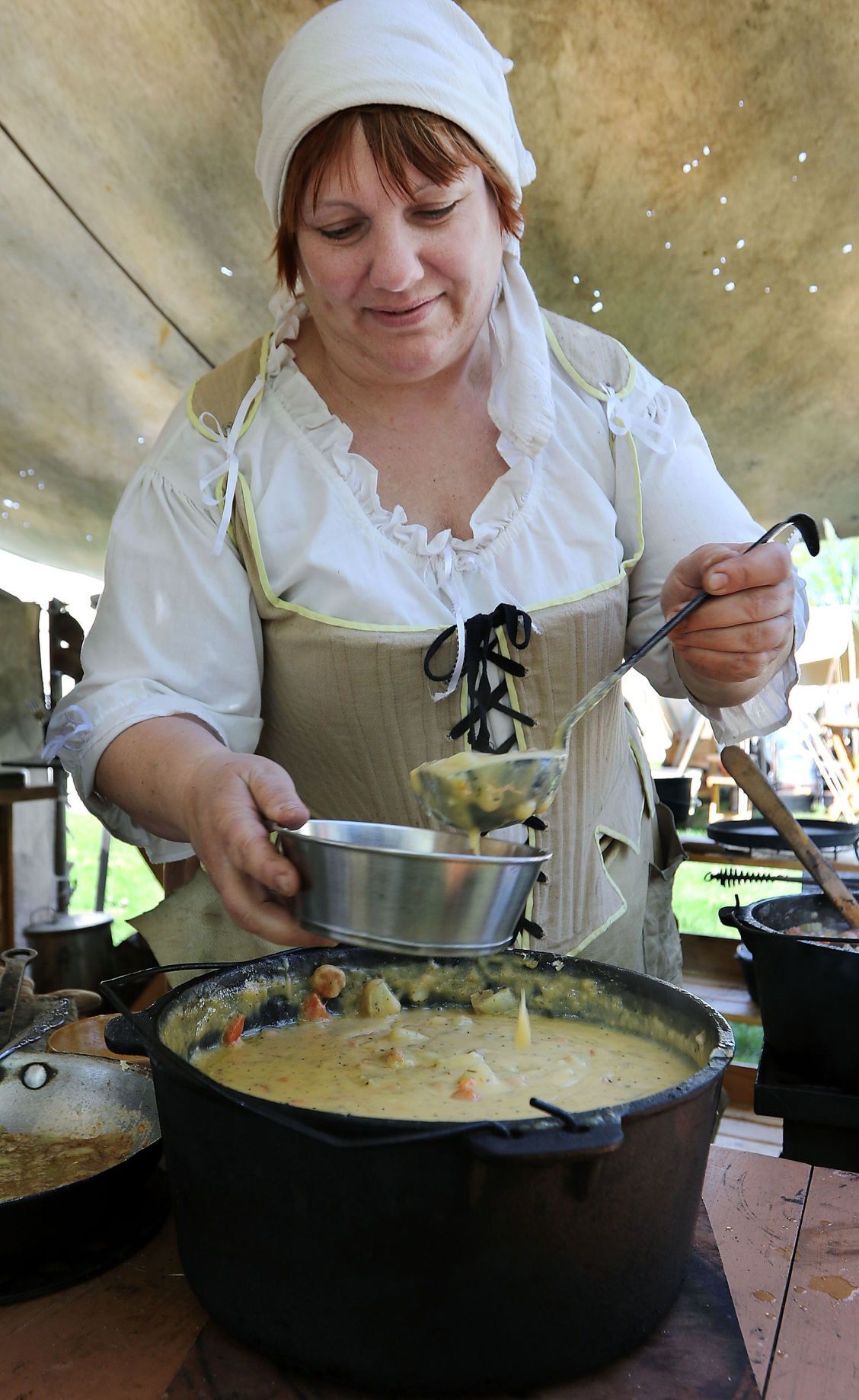 Laura Link of Elk Mound served cheesy potato and ham soup at The Past Passed Here in Chippewa Falls in 2018. Because of COVID-19, no field trips to the festival are planned this year. View more photos at LeaderTelegramPhotos.com

Blacksmith Terry Kruger of Mauston heated steel during the Past Passed Here in Allen Park in Chippewa Falls in 2016. The festival is relocating this year to Marshall Park, along Bridgewater Avenue, because Allen Park has flooded in recent years. Staff Photo by Dan Reiland

Laura Link of Elk Mound served cheesy potato and ham soup at The Past Passed Here in Chippewa Falls in 2018. Because of COVID-19, no field trips to the festival are planned this year. View more photos at LeaderTelegramPhotos.com

CHIPPEWA FALLS — After skipping last year because of the COVID-19 pandemic, the Past Passed Here festival is returning to Chippewa Falls this week, but is moving to a new location.

The Past Passed Here, now in its 17th year, is an annual event meant to show what life was like in the late 1700s and early 1800s. The event offers about 20 stations where people can learn about the pioneering era and fur traders and survival in western Wisconsin. They can learn about games played at the time, see a speed-sawing activity, or watch a blacksmith and a weaver at work.

The festival has always been in Allen Park, at the south end of downtown Chippewa Falls. That location is the site of the Chippewa Lumber & Boom Company, which at one time was the largest saw mill under one roof in the world, with up to 175 saws that could be running at a time. However, the mill closed in 1910.

However, Allen Park has flooded in recent springs, and the 2019 event was cut short because the site was about to flood. Organizers decided to relocate the celebration to Marshall Park, on the south side of Bridgewater Avenue, across from Irvine Park.

Jim Schuh, a former Chippewa Falls Main Street director and co-chair of the festival, said there is a lot of energy in their group this year, as no one wanted to see the festival shut down two straight seasons.

“People are really excited to be getting back together,” Schuh said Monday. “We have re-enactors coming from all over Wisconsin. We’re ready to have some fun, and I think the public is anxious to get out and do something.”

Popular food items like voyageur stew and buffalo burgers will be back. There are several musicians lined up, including local singer-songwriter Jerry Way, he added. Some of the re-enactors coming are new to the festival.

“One person makes bows — like bows and arrows,” Schuh said. “We’ve never had that before. Another makes jewelry out of porcupine quills; we haven’t had that in a dozen years.”

Schuh is optimistic about their safety plans. The festival will be set up on the baseball field at Marshall Park, providing plenty of space for people to spread out and be social-distanced.

“There is a fence and a gate, and the city is allowing us to use their concession building,” he said.

In typical years, hundreds of fourth-graders from elementary schools across western Wisconsin attend the festival, during Thursdays and Fridays. More than 9,400 children have now attended the event in prior years.

“Because of COVID, they aren’t taking class trips,” Schuh said. “It’s less complicated (for us), but it’s disappointing, because the school-age kids are why we do this.”

The hours to the public remain unchanged on Thursdays and Fridays, as the event was always for kids-only during those school days in past years.

Schuh is upbeat about the new location. There is ample parking, and the concession building includes two bathrooms and access to water, which were all challenges at Allen Park. The new $3.5 million Chippewa County Historical Society museum, which is currently under construction on the north side of Bridgewater Avenue, will be open in future years, and should boost attendance to that building, he added. He said he will miss being on the site of the historic mill, adding that there are plusses and minuses to the move.