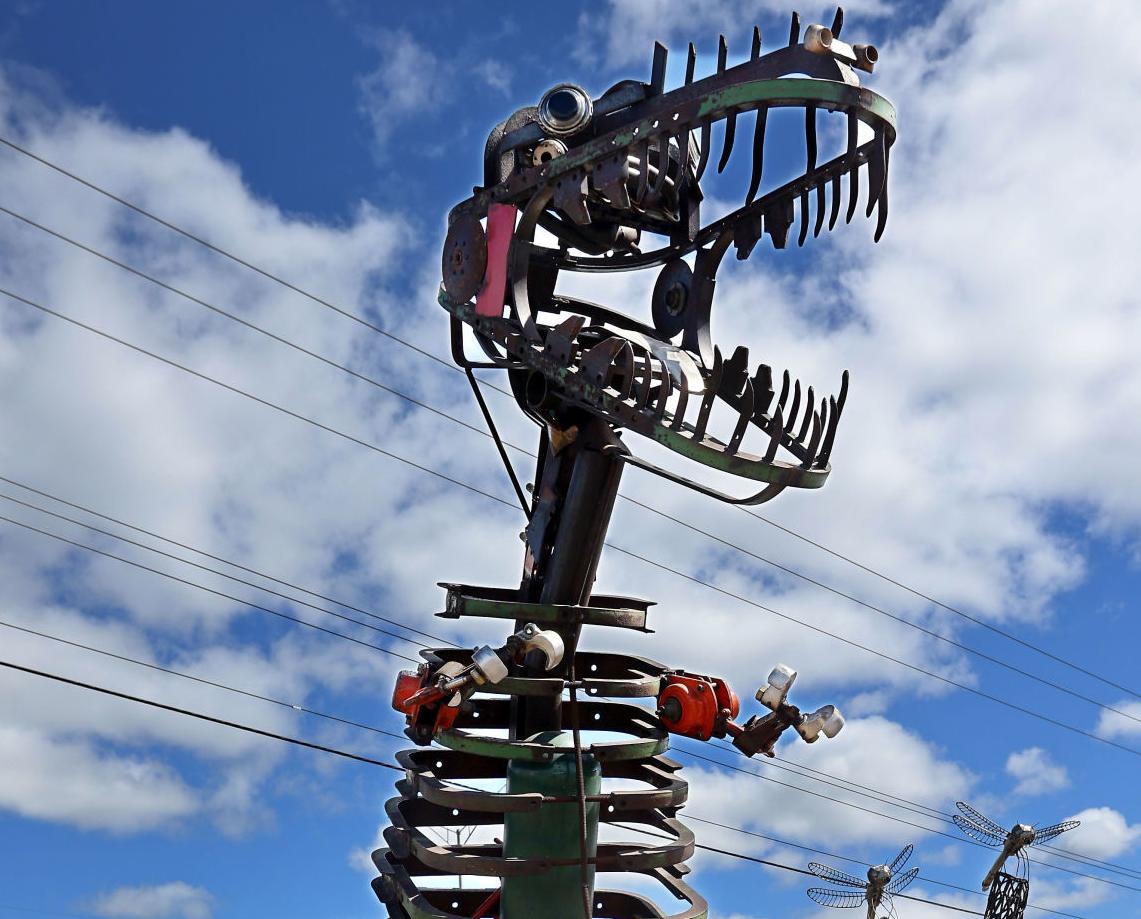 Hazel Gladitsch, 4, and Sterling Lehman, 1, of Eau Claire explore metal dinosaurs, including an 11-foot Tyrannosaurus Rex, at the new “Eau-Rassic Park” metal sculpture exhibit Tuesday at Artisan Forge Studios in Eau Claire. The exhibit will be in Eau Claire for at least six months. View more photos at LeaderTelegramPhotos.com. 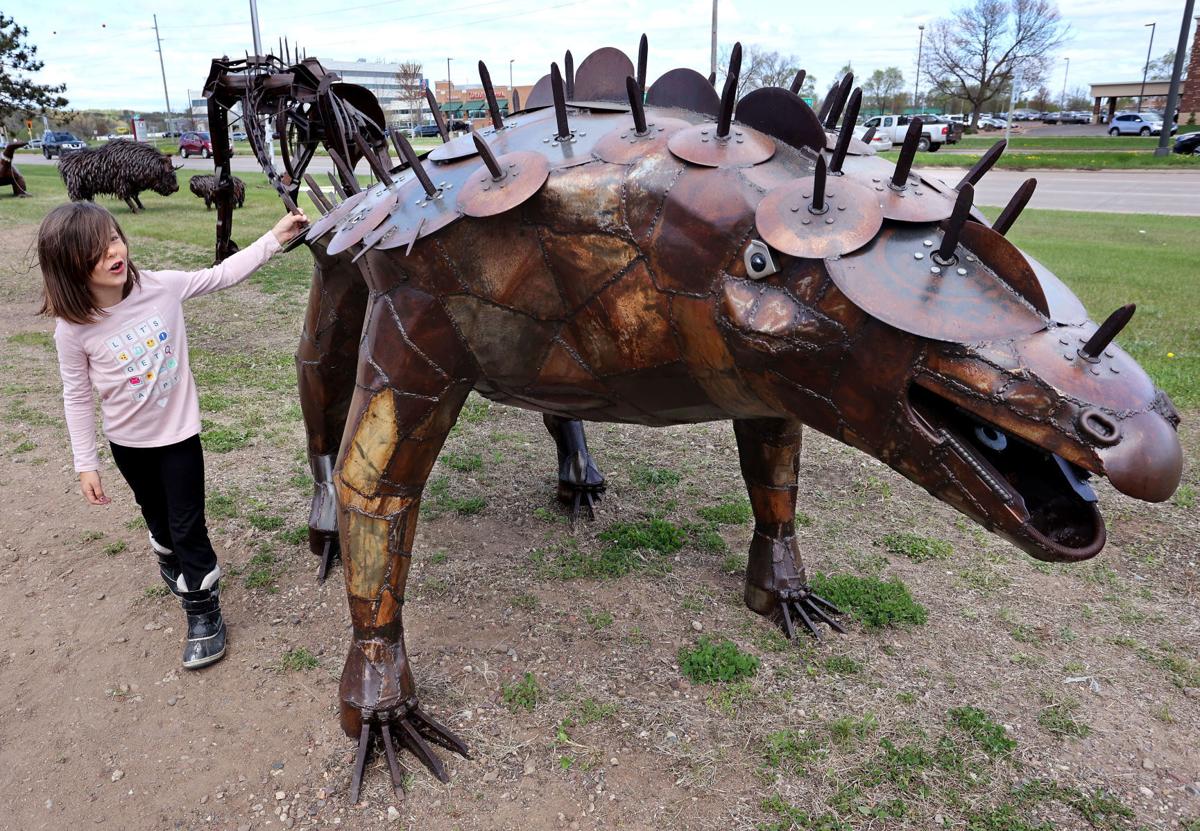 Hazel Gladitsch, 4, and Sterling Lehman, 1, of Eau Claire explore metal dinosaurs, including an 11-foot Tyrannosaurus Rex, at the new “Eau-Rassic Park” metal sculpture exhibit Tuesday at Artisan Forge Studios in Eau Claire. The exhibit will be in Eau Claire for at least six months. View more photos at LeaderTelegramPhotos.com.

EAU CLAIRE — They’ve been extinct for 66 million years, but the dinosaurs have temporarily returned to their Eau Claire stomping grounds.

Each dino has a name, too: An 11-foot tall Tyrannosaurus Rex is “T-Rex Evolved.” An 800-pound, 18-foot-long Stegosaurus is named Stanley. A birdlike, feathered dinosaur is named Jitters — a reference to his wide-eyed expression, said creator Dale Lewis.

Also looming over the studio’s front lawn are a musk ox mother and calf and an armored dinosaur named Scrappy Ed, among others.

“It draws kids and parents, although there have been an awful lot of adults here checking them out too,” Johnson said Tuesday. “They’re unique and different and look a little bit dangerous. It’s something more relatable than a lot of our abstract art.”

The dinosaur exhibit — in front of Artisan Forge, 1106 Mondovi Rd. — is free and open to the public, Johnson said.

“It’s a public exhibit. We want people to come out and engage,” he said. “Take pictures out front, come on in the building. There’s 42 artists that work here in the building.”

The dinos are the brainchild of Lewis, a prolific metalworker and artist based in Hastings, Minn.

Dinosaurs aren’t his only passion. Ranging from a coiled metal dragon named Bing to a giant mouse named Ratatouille, Lewis’ sculptures are on display across the Midwest, including in Wisconsin, Minnesota, South Dakota, Indiana, Missouri, Kansas and Iowa.

Lewis is no stranger to Eau Claire either.

Several of his pieces have appeared in Sculpture Tours in Eau Claire. His “Trojan Horse” sculpture, a towering black equine statue made from salvaged computer panels, won the tour’s People’s Choice award in 2015.

Creating the scrap sculptures began as a small retirement hobby after Lewis left his career as an electrical technician and machinist. Now, Lewis says, the art is his “full-time obsession.”

“I’m constantly running possibilities of subjects through my head,” he said.

The dinosaur exhibit is the first time all 14 prehistoric creatures have been displayed together; most recently, 11 were at home in Lewis’ yard.

Almost all the materials Lewis uses are recycled or scrap. Most of the dinosaurs took him two to three months to complete, he said.

“They all take long enough that it’s a bit of a celebration when I finish one,” he said.

Johnson said he’s thrilled to host the Scraposaurs beginning with the May kickoff of Eau Claire’s Creative Economy Month. The project has the blessing of Visit Eau Claire and the nonprofit Sculpture Tour Eau Claire, he said.

“I thought that I’d love to do something significant for the community that would be fun, and also help enhance the whole Sculpture Tour presence in Eau Claire,” Johnson said.

The dinosaur exhibit will be in Eau Claire for at least six months, possibly for a year. The dinosaurs may wander around the city and beyond, Johnson said, hinting at a scavenger hunt that would challenge the public to find the locations of all 14 creatures.

But ever since the dinos landed in front of Artisan Forge Studios, they’ve snagged plenty of attention.

“It’s almost ridiculous the amount of people that have been coming up here and taking pictures,” Johnson said.

He hopes the public will spend plenty of time with the Scraposaurs: “The dinosaurs are going to party right along with us this summer.”