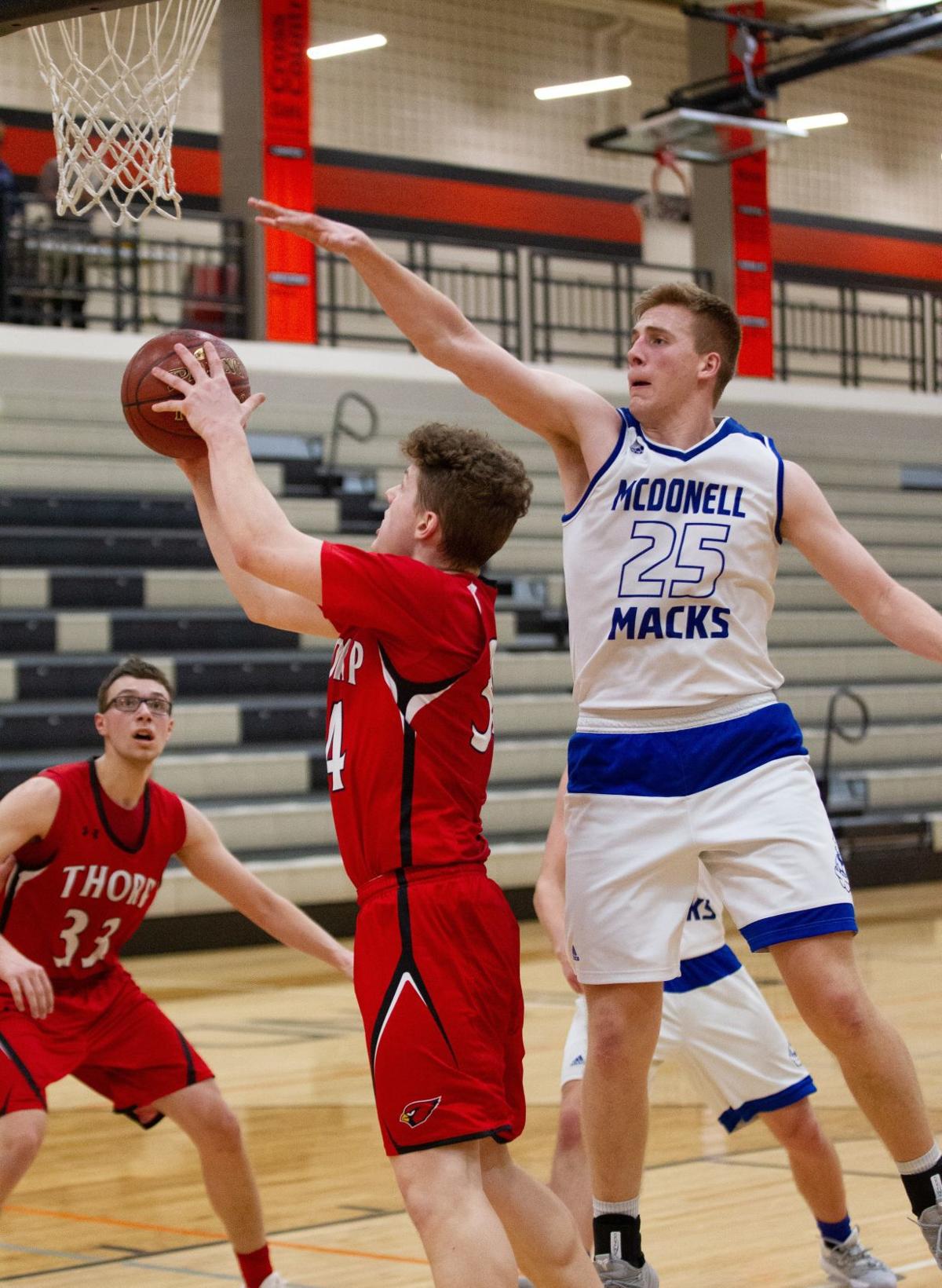 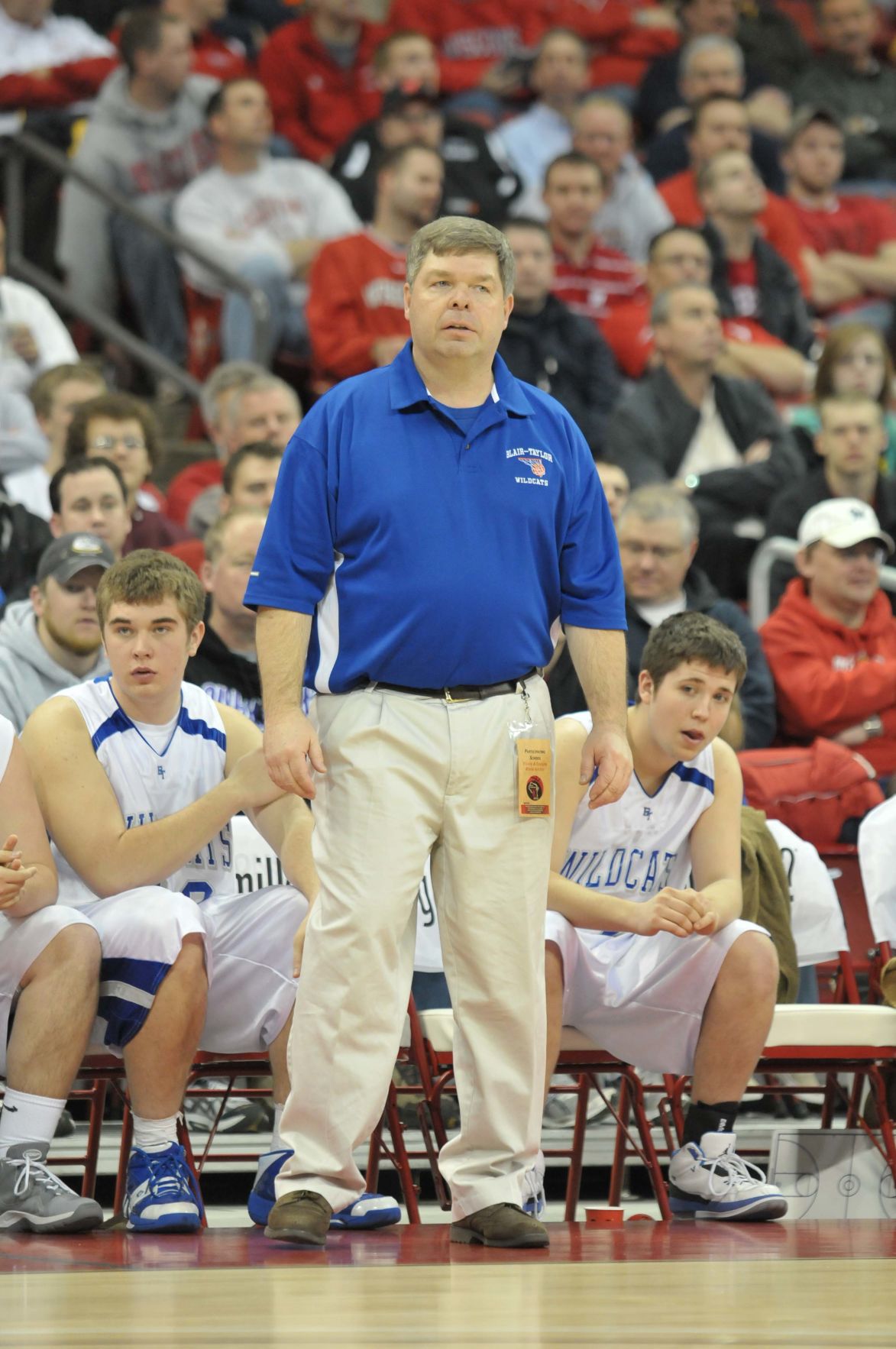 Blair-Taylor coach Randy Storlie watches the action unfold during a Division 3 state tournament game against Racine St. Catherine’s on March 19, 2010 at the Kohl Center in Madison.

Blair-Taylor coach Randy Storlie watches the action unfold during a Division 3 state tournament game against Racine St. Catherine’s on March 19, 2010 at the Kohl Center in Madison.

It’s been nearly five months since the Chippewa Falls McDonell boys basketball team first stepped onto the court for its first practice in November. In the ensuing months the team’s 14 boys have put their heart and soul into doing what Macks basketball has become known for: getting to state.

It appeared the boys were well on their way to another trip to Madison after taking down Thorp in the sectional semifinal Thursday evening. Unfortunately for the boys, that’s as close as they will come. The story of their season will conclude without a proper ending after the WIAA announced late Thursday night that the remainder of the winter sports season would be canceled effective immediately.

“I wasn’t that surprised,” Macks senior Caleb Thornton said. “With everything happening around the world we all kind of had a hunch it was coming but we didn’t want the season to end, especially not on a cliffhanger like this.”

Reactions from the team seem to be that of understanding considering the COVID-19 outbreak was declared a national state of emergency by President Donald Trump on Friday.

“Honestly, I had mixed emotions,” McDonell coach Adam Schilling said. “I was talking to (Thorp) Coach (Rich) Sonnentag a lot before we played yesterday and we both admitted it was hard to concentrate on basketball at this point. You feel really bad for the seniors, especially the ones that rarely will get this opportunity to keep playing, I think that’s the ones it really affects because it’s their senior year, for some of them it’s their last year playing basketball. But I definitely understand that it’s something they have to do when you see everything else being cancelled. I think it make sense that the WIAA did what they had to.”

Senior JD Bohaty said he expected to get one more chance to play this season on Saturday when the Macks were scheduled to take on Luck in a rematch of last year’s sectional final. He figured they would be able to play the game with limited attendance before the WIAA would have to shut down the state tournament.

“I was pretty disappointed,” Bohaty said, “but it’s out of our control and you have to live with it.”

Eion Kressin, the team’s senior star, had similar feelings. He too thought his team would get to play one more game before the season was cancelled.

“Obviously I’m a little disappointed that I didn’t get to finish the entire basketball season,” he said, “but at least I got to end on a win which is always great.”

The cancellation of the state tournament is the first time the WIAA has not awarded a boys basketball state champion since the tournament began in 1916. The lack of a champion means questions will forever remain unanswered for the teams that won Thursday’s sectional semifinals and will never get a chance to compete to be state champions.

For Thornton, who said his competitive basketball career likely came to an end Thursday, there will be stories to tell for years to come.

“I think it’s going to be a fun story to tell the kids and the grandkids,” He said. “It’s just a season where anything could have happened, but you’ll never know. … I like to think because we made it as far as we did, we’re basically state champions.”

The team held one final intrasquad game at McDonell on Friday afternoon in front of approximately 200 fans, according to Thornton. It was the school’s way of saying goodbye to the boys whose season ended so abruptly.

For Kressin and Bohaty, basketball will likely continue after McDonell. Kressin plans to attend St. Mary’s in Minnesota next season to continue his basketball career and Bohaty said he is continuing to look at options, though the moratorium on recruiting will likely delay his decision-making process.

Trailing Bangor — the team which knocked the Wildcats out of the playoffs last season — by 14 with nine minutes remaining, Blair-Taylor decided it wasn’t done yet.

The Wildcats kept clawing back until they finally took a one-point lead in the final 30 seconds. The Cardinals had a chance to win it after regaining possession with 12 seconds to go, but the Blair-Taylor defense clamped down, forced a bad shot and clinched the win over the team that had given them heartbreak a year prior.

It wasn’t until a few hours later that the team heard it would be its final game together.

The team bus was just about to arrive back at Blair-Taylor High School when a player saw the news online. Word spread throughout the bus in a hurry.

“Devastation to begin with, not even thinking it was even real,” Wildcats coach Randy Storlie said of his reaction to hearing the news.

Wildcat fans were waiting to greet the team as the bus arrived to school. Instead, Storlie brought the boys to the gym for a closed-door meeting to talk about what had happened.

“We talked for a little bit, tried to calm their fears, their anxiousness, their sadness,” Storlie said. “We had another meeting (Friday) morning to make sure everyone’s mental health and emotional health was OK.”

It was tough news to swallow, especially for the team’s seniors who have now played their final high school basketball game. The team’s dreams of reaching the state tournament for the first time since 2014, a goal they were one win away from achieving, were dashed.

“They’re in shock right now,” Storlie said. “They still want to play. They’re not taking it very well, none of us are — myself and our fans included. When you get that close to a dream of getting to the state tournament, working all those years and putting in all that time, having fun doing it ... all of a sudden the dream is pulled away from you, and it’s something you can’t put into words about how much it really hurts.”