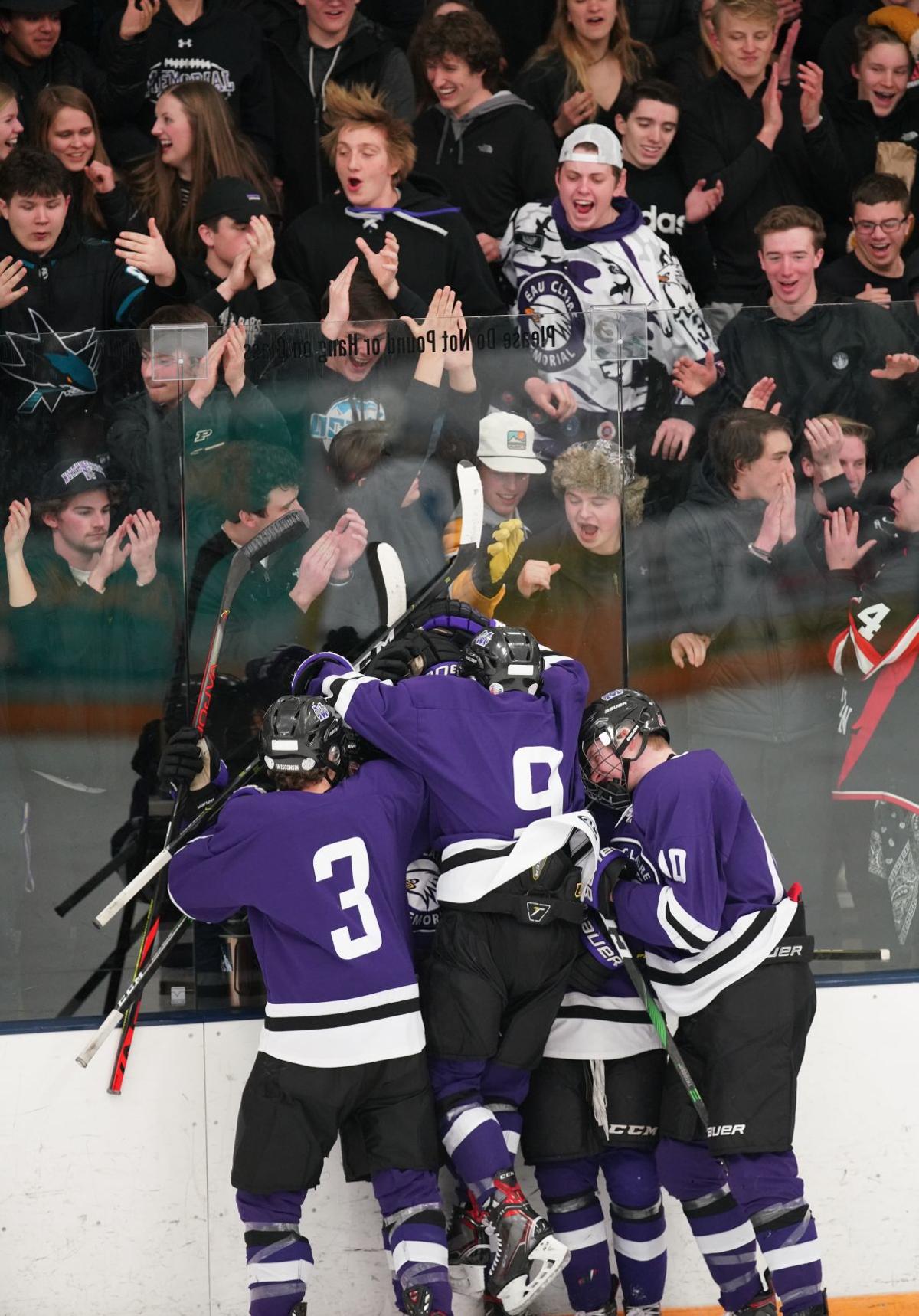 Eau Claire Memorial celebrates a goal with its student section during an intracity boys hockey game against Eau Claire North on Tuesday at Hobbs Ice Arena. 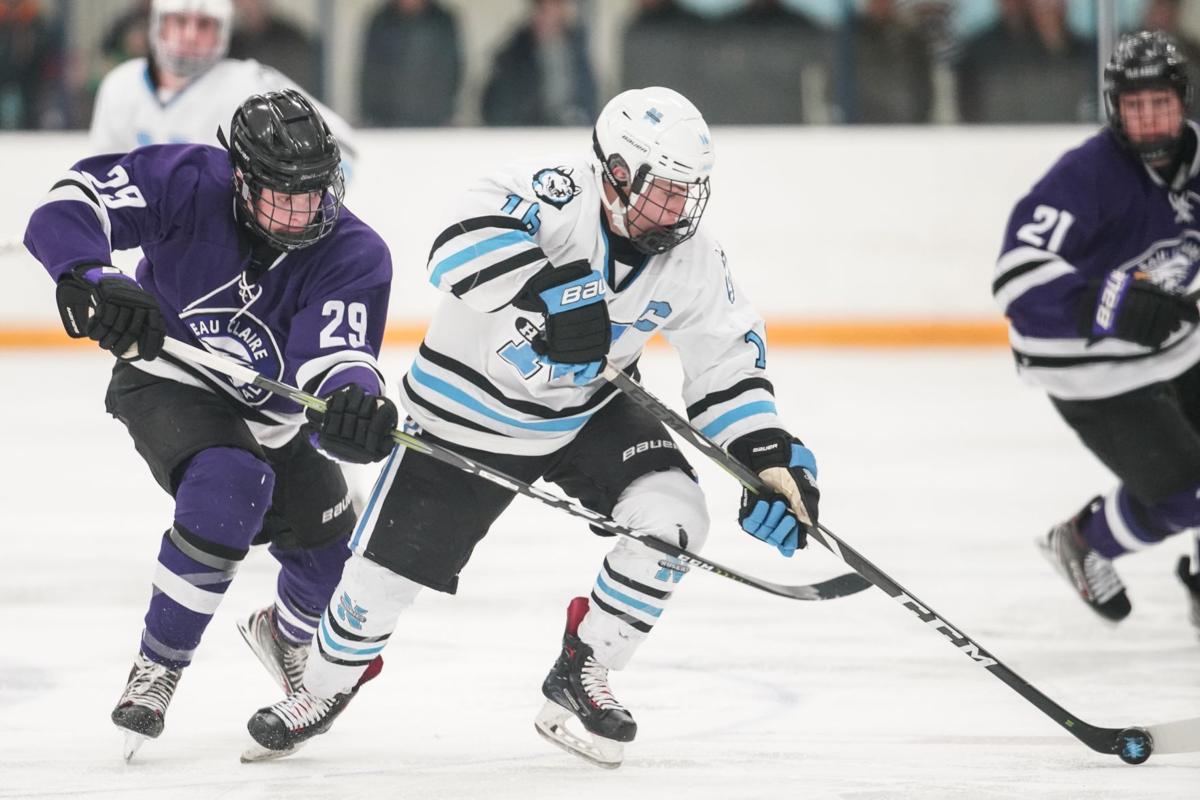 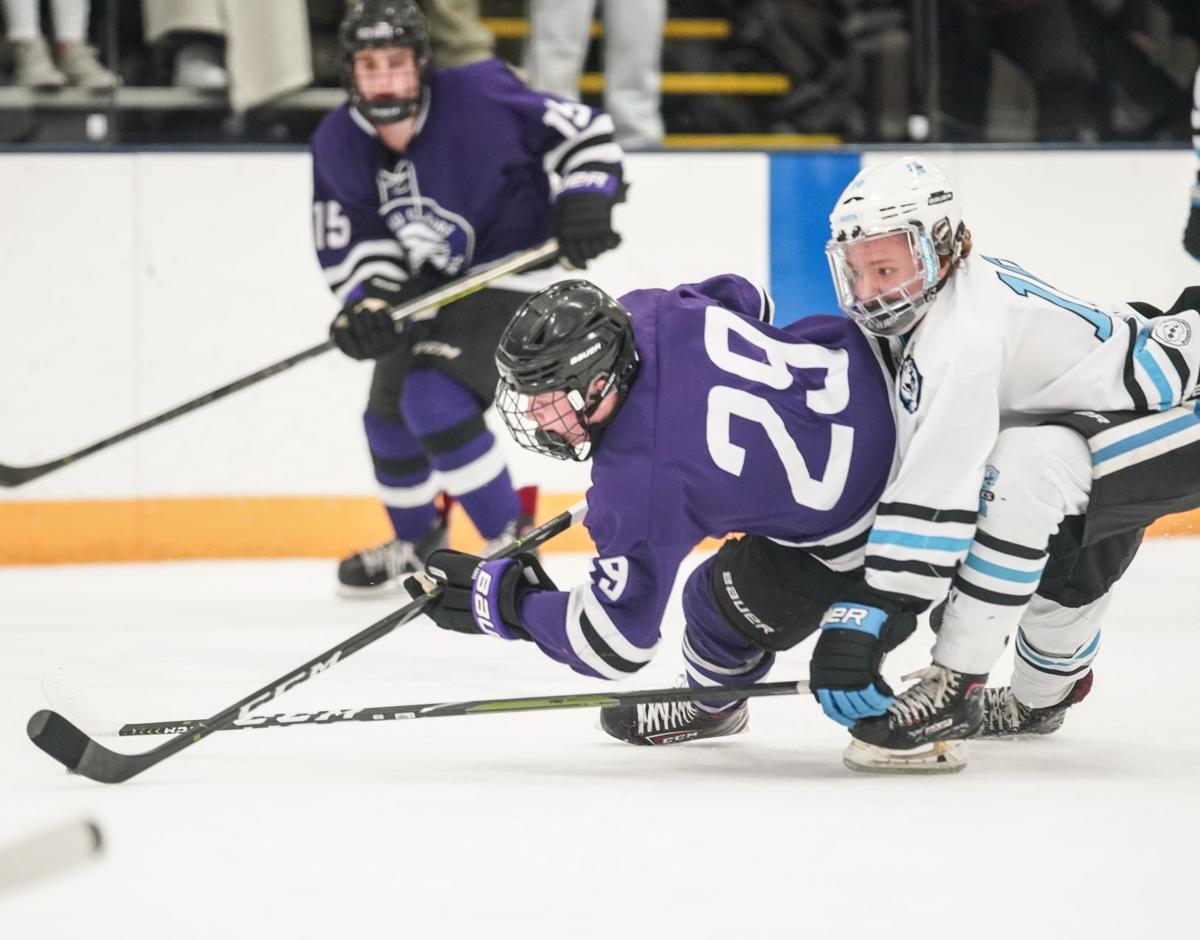 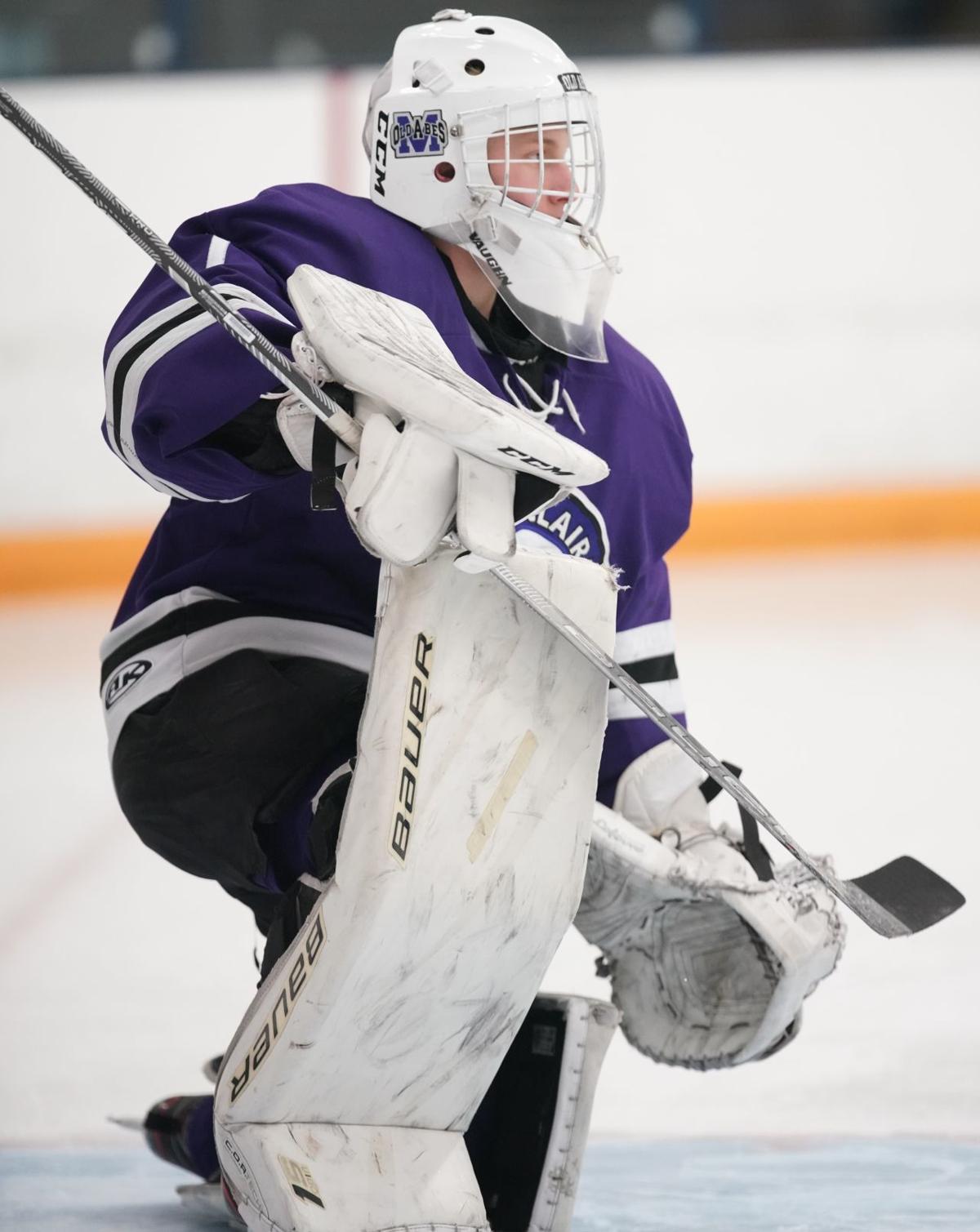 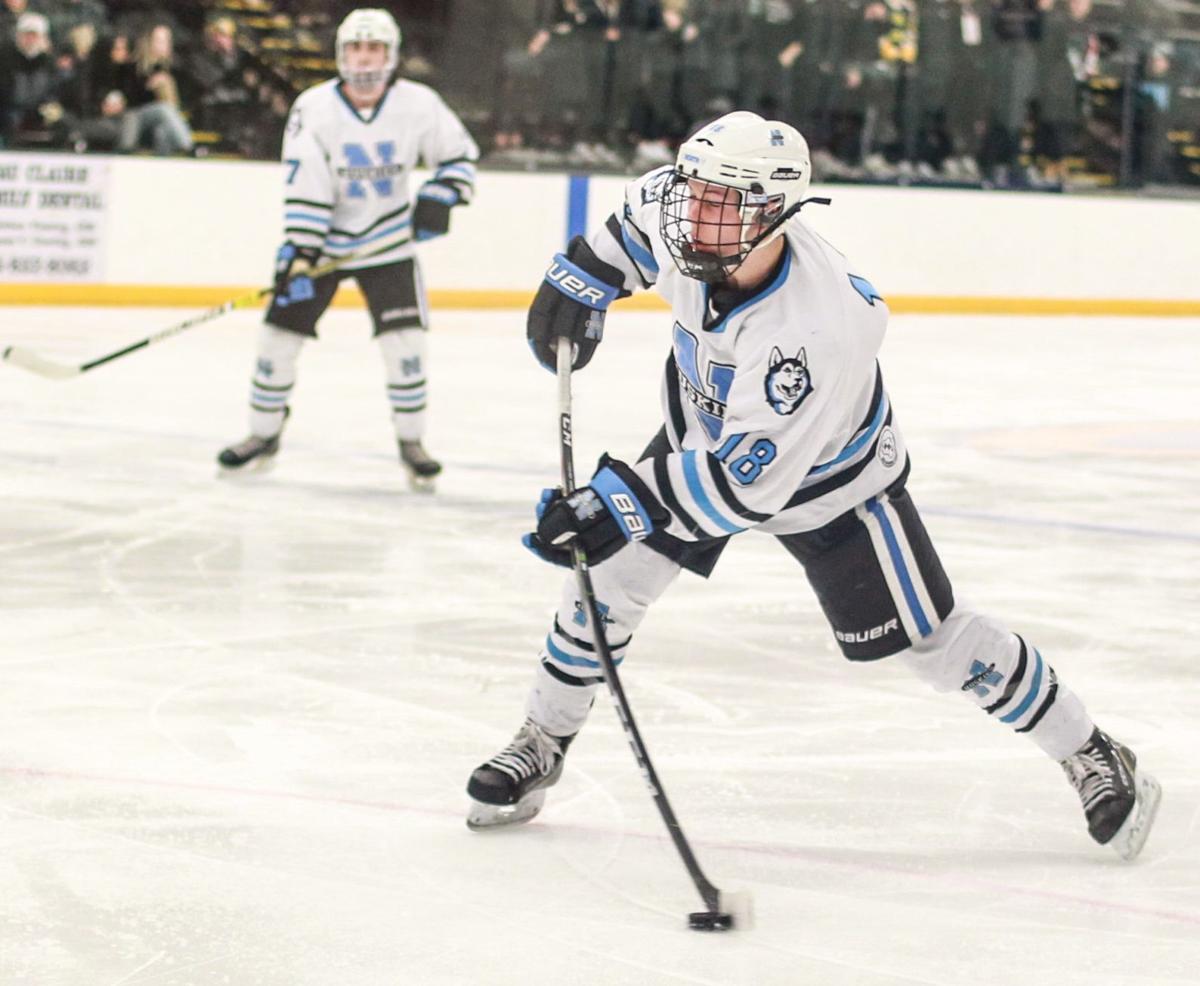 Eau Claire Memorial celebrates a goal with its student section during an intracity boys hockey game against Eau Claire North on Tuesday at Hobbs Ice Arena.

With 4:50 to go in the third period the chant began.

You could tell the Eau Claire Memorial fans derived a little more pleasure than usual from it with their cross-town Eau Claire North rivals sitting just one bleacher section away.

There was still plenty of time to go, but the game was already sealed thanks to a five-goal second period for the Old Abes who got revenge — at least in their eyes — for a tie back in January with an 8-2 victory over the Huskies on Tuesday night in Hobbs arena.

“Whenever you’re playing somebody you know on the other team, it doesn’t matter if it’s a sister or a brother, you’re trying to win and you know if you lose, they’re going to rub it in,” Old Abes coach Chris Tok said. “If you have any kind of competitive spirit it just doesn’t sit well. Our guys didn’t like it last time and they showed what should have happened this time.”

With senior Max Savaloja out for the night, Eau Claire Memorial turned to a pair of sophomores to pick up the offensive firepower.

Sophomore Carter Olson put the Old Abes on the board in the first period, taking a cross-ice pass from Cole Fisher at the 5:55 minute mark of the period to give Memorial a 1-0 lead.

It was the lone goal of the period, but in the second, everything seemed to change for the Old Abes.

Fellow sophomore Peyton Platter put the Old Abes up 2-0 when he received a behind-the-net pass from Will Sherry and found the back of the net.

“I think most of our goals were good passing plays,” Tok said.

“We had good puck movement really.”

Memorial and North exchanged goals before the Old Abes found the back of the net for three straight with Platter and Olson adding to their night with another goal each.

“We put pucks behind them, won battles and crashed to the net,” Platter said.

Up 6-2 entering the third, Memorial put the Huskies away for good. The Old Abes’ crisp passing continued as Trevin Kison opened the period with a goal less than a minute into the frame and Olson wrapped up the night with a hat trick, collecting a centering pass from Joe Kelly to make it 8-2.

“Coming into the game I always think of working hard and it just happened tonight,” Olson said.

It was Olson’s second hat trick of the season and third multi-goal game of his young career.

“He just sat in the scoring area,” Tok said of Olson. “He’s growing in terms of his intelligence with his game and he’s been a sound hockey player with us since Day 1.”

“I thought for a while we had a pretty good forecheck going, I thought we competed well, I just think that those goals we gave up in the second period weren’t very responsible,” Huskies coach Ryan Parker said. “I thought we got a little too excited to keep going and sometimes you’ve got to slow the game down a little bit.”

Jaxon Vance scored the Huskies’ first goal on a 5-on-3 advantage in the second and Caden Sutter continued his strong year with North’s second goal on a breakaway eight minutes later.

North will wrap up the regular season with a game in Chippewa Falls at 7 p.m. Thursday before heading to the playoffs.

“We want our guys to respond, we want them to understand and reflect on what we could have done with the positions we were in,” Parker said. “Going forward we want to keep pushing forward to keep that responsibility up so we don’t give those goals up.”

For Memorial, Big Rivers action will wrap up on Thursday at 7 p.m. with a date in Hobbs against the conference’s top-ranked Hudson Raiders.

“Our goal is to keep getting better, if we can keep building off this game, we’re definitely a team that can contend in the playoffs,” Tok said.