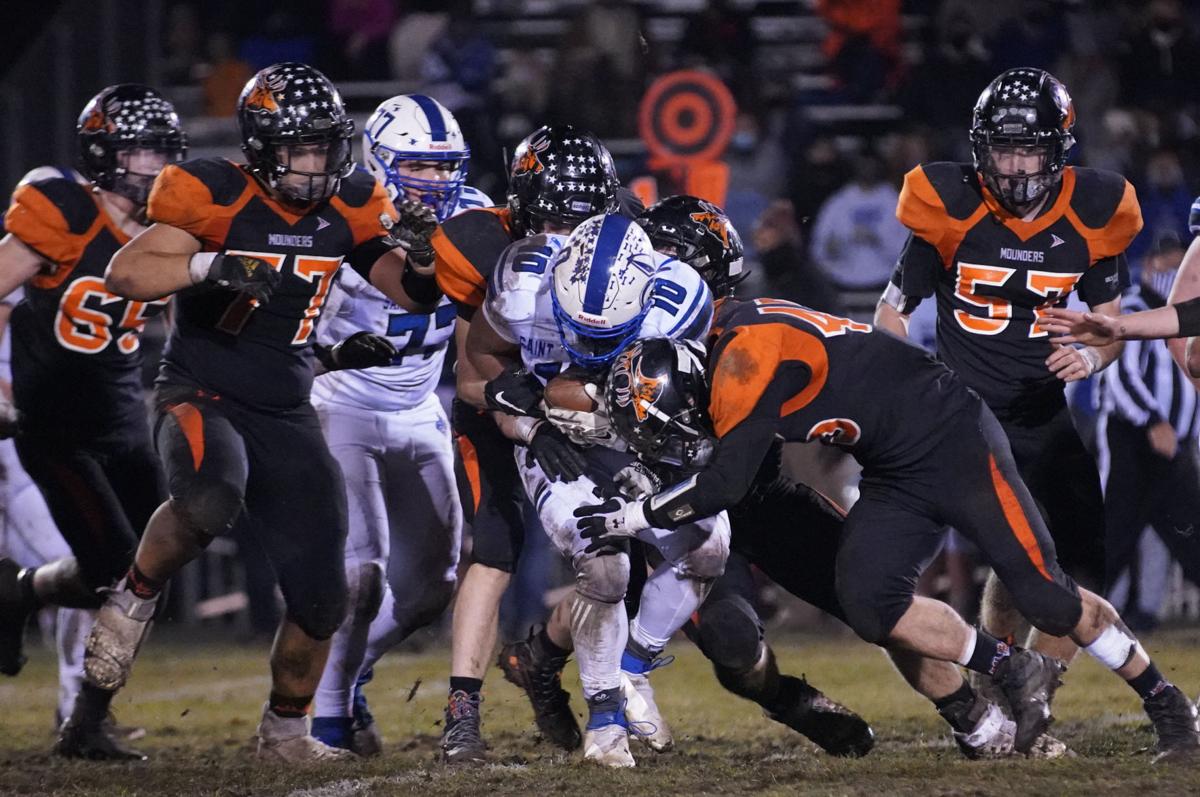 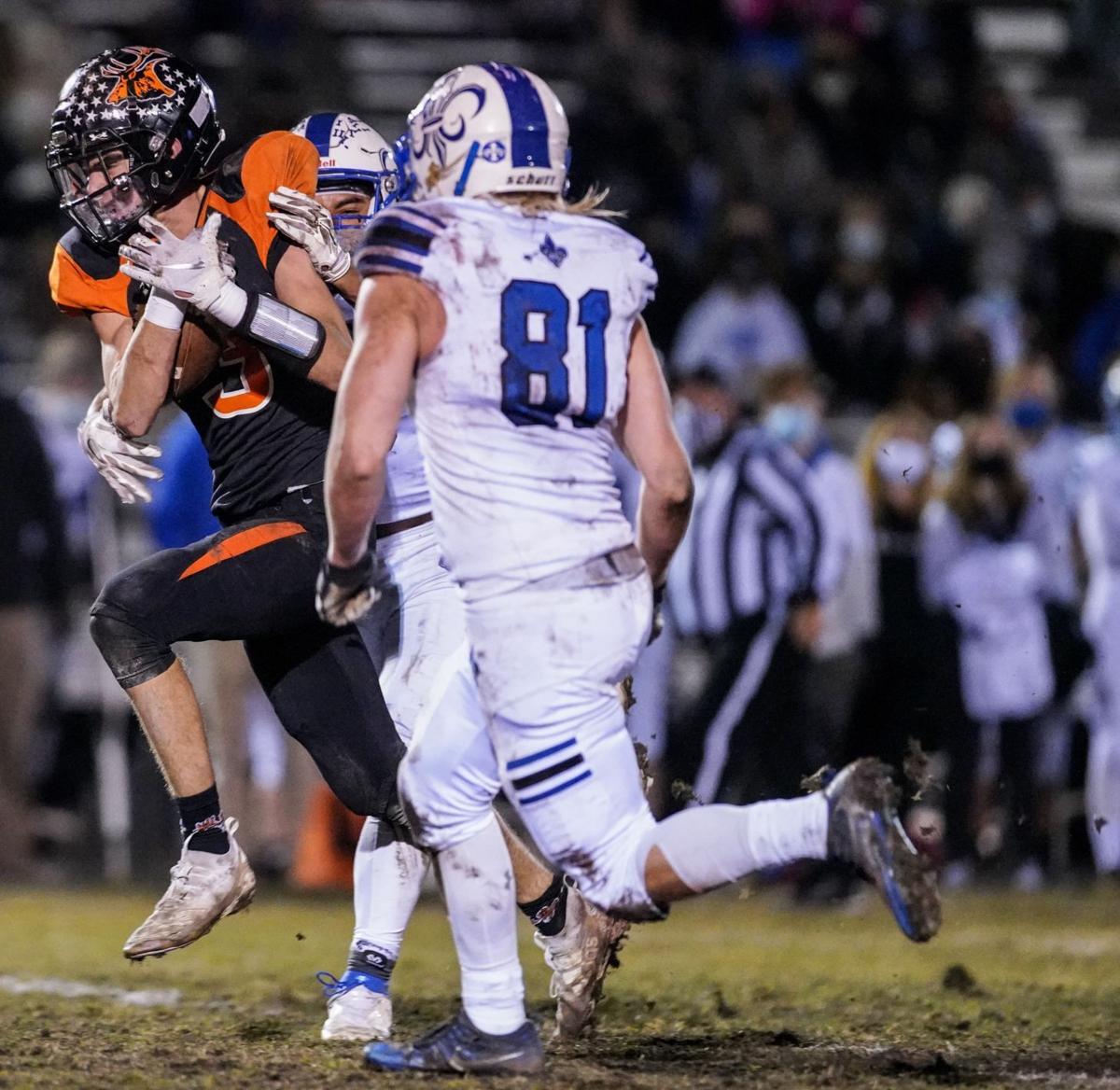 Elk Mound's Ben Heath runs away from a pair of St. Croix Falls defenders during a Level 2 playoff matchup Thursday in Elk Mound. 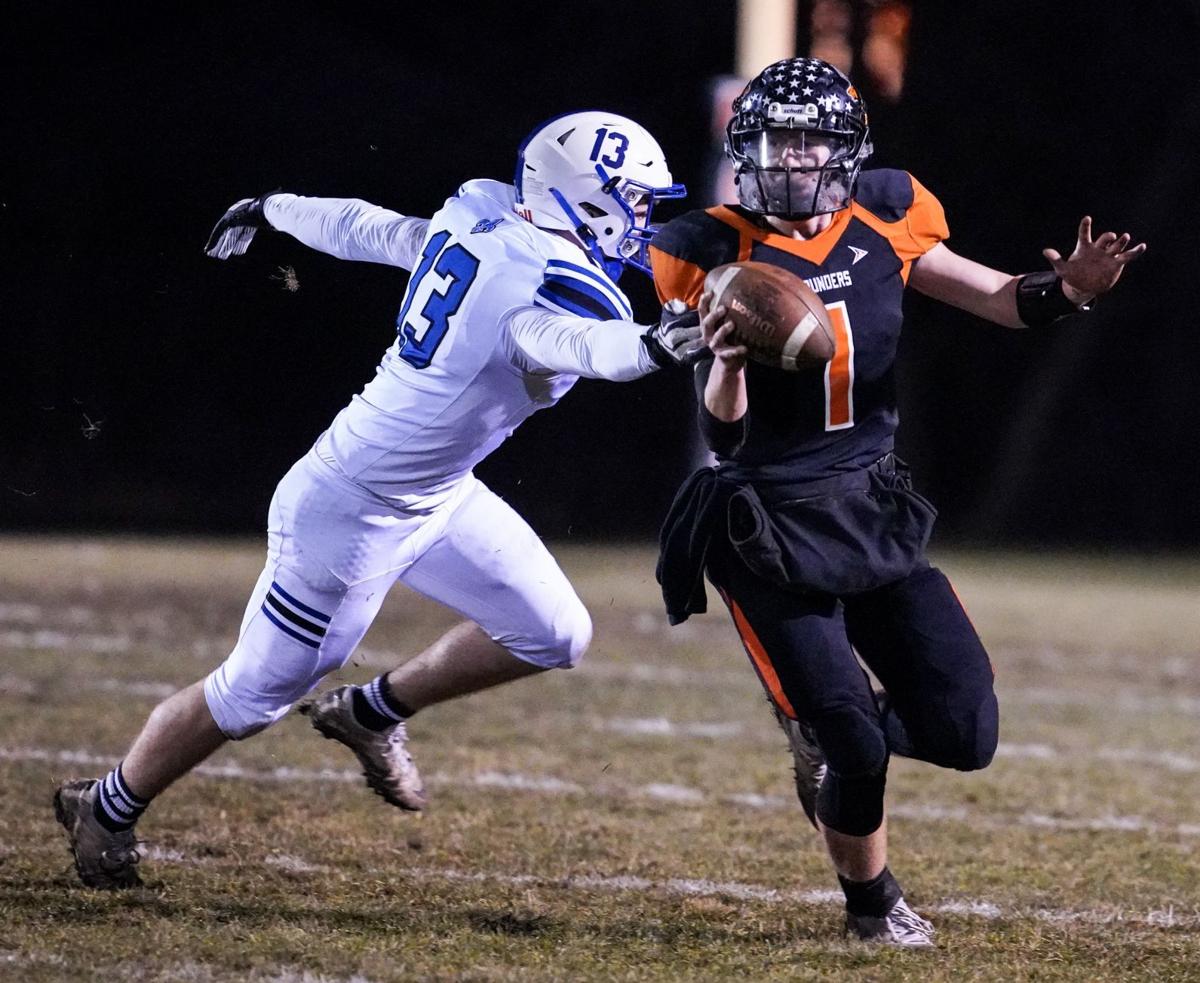 Elk Mound's Ben Heath runs away from a pair of St. Croix Falls defenders during a Level 2 playoff matchup Thursday in Elk Mound.

ELK MOUND — Given the circumstances, they couldn’t have asked for much more.

When Elk Mound quarterback Ryan Bohl kneeled out the Mounders’ 34-12 victory over St. Croix Falls on Thursday, it sealed the deal on a feat which might not have seemed possible a few months ago.

The Mounders played each and every game they were supposed to in this fall’s makeshift schedule, closing things out with a Division 4 regional championship. But take the victory out of it, and to have completed a somewhat normal season amid the pandemic’s circumstances at all is a win itself.

“We found a way to beat the odds, we really did,” Elk Mound coach Dave Lew said. “Our kids listened to us, they did what they were told, and they were rewarded with nine games this year — more than most teams in the whole state got.”

Elk Mound played all seven allotted regular season games and made it through the two-round regional playoff unscathed. Three Cloverbelt Conference teams weren’t able to get games in against every league member. Of the other five teams that were able to play a full league schedule, three ran into a forfeit in the playoffs.

Even after the commanding playoff triumph over the Saints, the rare opportunity the Mounders got this fall was at the front of their mind.

“It feels really good to know that we could beat the odds,” Mounders senior Nate Lew said. “A lot of teams had to get canceled, which is super sad. It was good that we could stay in school and get our games in.”

The playoffs in the northwest portion of the state were a bit of a mixed bag. Of Thursday’s 10 Level 2 matchups involving area teams, six resulted in forfeits and were never played.

While not everybody got the chance to compete for a regional title due to cancellations, it certainly meant something to the two squads taking the field in Elk Mound. The Mounders treated the two-week postseason as a traditional playoff experience. If they lost their first postseason game, they weren’t going to schedule another game afterward.

Elk Mound had reached Level 2 by virtue of a triple overtime win over Spooner which had all the atmosphere of a normal playoff game.

“It was a boost,” Bohl said. “We had to win that game. We knew that if we lost that game, that was our last game, and I think it gave us a lot of extra energy to move forward and push, play like we never played before. It got us this extra game.”

And in their curtain call on Thursday, the Mounders were in complete control. Avery Kaanta ran for 149 yards and two scores and Bohl passed for 161 yards on 12 completions. Elk Mound pulled away with 20 points in the third quarter.

“It was about as good as it could get,” Bohl said. “Everything seemed to be clicking. A few errors, but we figured it out.”

Bohl threw a two-yard touchdown to Carson Steinhorst in the closing seconds of the first half to put Elk Mound up 14-0, and three more scores in the third all but sealed the deal. Nate Lew, Ethan Levra and Kaanta all had rushing scores in the third quarter.

Defensively, Nate Lew caused two turnovers. The linebacker recovered a fumble and had an interception, both in the second half. He highlighted a strong game from the Mounders’ defense.

“At the start, it was just matching their intensity on the line in the trenches,” the senior said. “They started to get us on some counters, so we made some adjustments on who we were reading. Then after that it seemed to go fine.”

The Mounders finished the season with a 6-3 record. They graduate a large senior class which Coach Lew said he will remember for its spirit.

“I’ll remember how much fun they were,” he said. “I do have a son on the team, but all the seniors are my sons. It was emotional with all of them, not just one, with all of them. They did exactly what we told them all the time, and I think over the last four weeks they just found a way to do this.”

And while 2020 will be remembered for many things, the Mounders will have their rallying cry to look back on: beat the odds.

“I’m going to be real honest, I thought we were going to play two (games this year),” Coach Lew said. “I thought that we weren’t going to make it because then school started, but we found a way. I can’t thank the school board, the school district and our administration for all their support and the way they handled everything this year. Those people need to be mentioned, because because of them we got to do what we loved.”