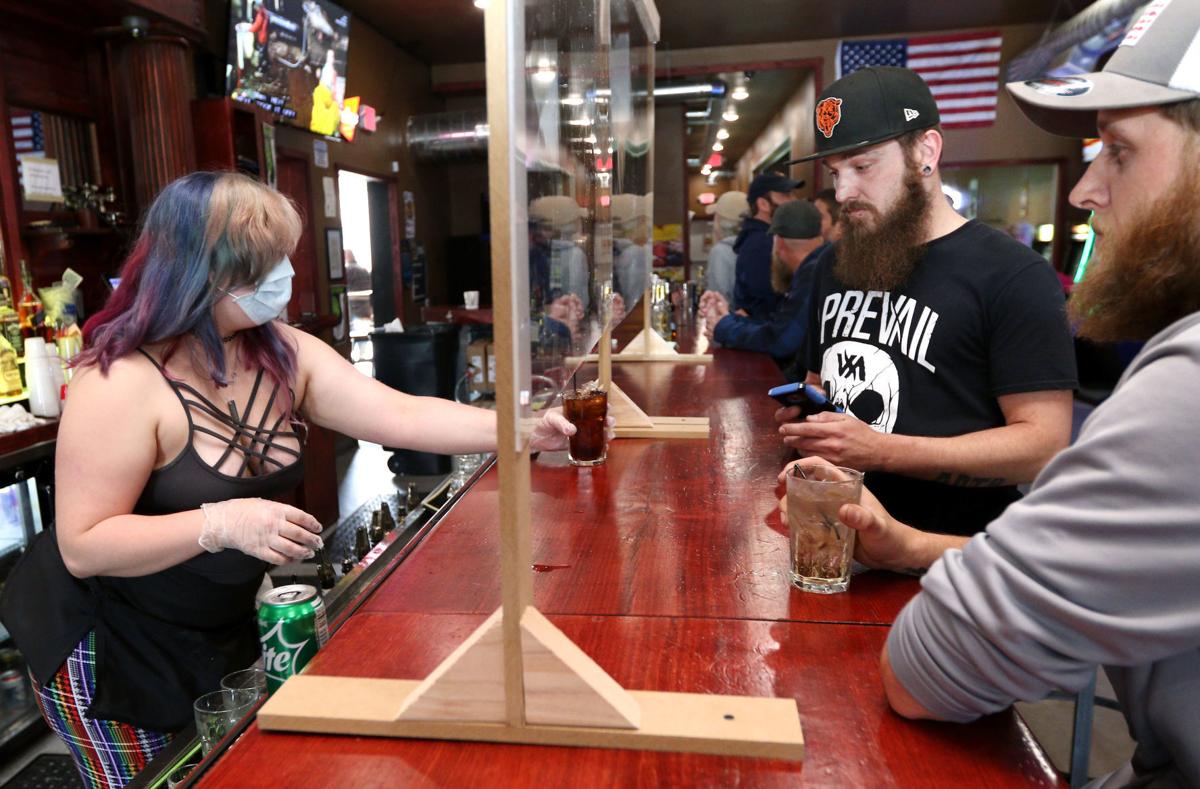 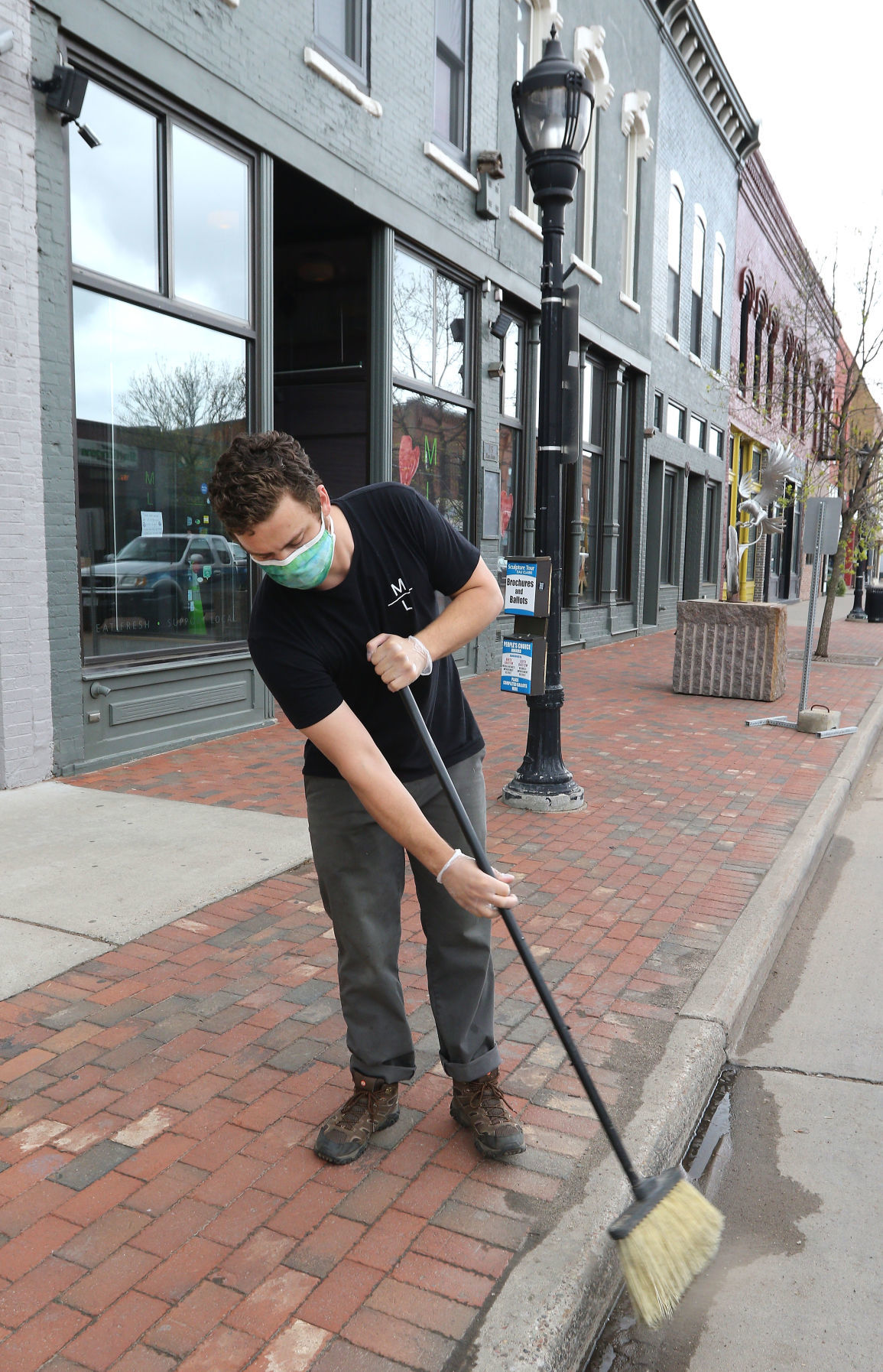 Mona Lisa's Restaurant employee Sam O'Brien sweeps the sidewalk in front of the restaurant Thursday on Water Street in Eau Claire. The restaurant is taking carry-out orders, but does not plan to reopen its dining area yet as owners voice public health concerns for customers and employees. Workers at Mona Lisa's and others under the same ownership group have continued to receive wages through a forgivable loan the businesses secured through the Paycheck Protection Program.

Mona Lisa's Restaurant employee Sam O'Brien sweeps the sidewalk in front of the restaurant Thursday on Water Street in Eau Claire. The restaurant is taking carry-out orders, but does not plan to reopen its dining area yet as owners voice public health concerns for customers and employees. Workers at Mona Lisa's and others under the same ownership group have continued to receive wages through a forgivable loan the businesses secured through the Paycheck Protection Program.

For the first time in two months, diners buying lunch from Joel’s 4Corners were able to sit in the Chippewa Falls restaurant’s dining room instead of only getting their orders to-go.

The bar and grill opened for dine-in at 11 a.m. Thursday, making use of Wednesday’s state Supreme Court decision that brought an immediate end to Gov. Tony Evers’ safer-at-home order, which was scheduled to last until May 26.

Mindful of the health danger posed by the coronavirus pandemic, Joel’s 4Corners had fewer tables and chairs in its dining room, creating more space between diners to maintain a distance intended to reduce the spread of germs.

Those at the bar are asked to maintain a two barstool gap between them, if they’re not part of the same family or group. Salt and pepper shakers and condiment bottles are available upon request and wiped with sanitizer between each use. Hand sanitizer is set up at two spots in the bar and personal protective equipment is available to employees, though it is their prerogative to wear it.

“For our servers it’s their choice to wear masks,” Seidlitz said.

After its first lunch hour with dine-in customers, he said the crowd was about 20% of what he’d normally see on a weekday.

Being allowed to resume dine-in service was a relief to Seidlitz though, as he noted that food prices, especially beef and now fresh produce, have been going up in recent weeks. That put added stress on the business while it had stayed afloat with a skeleton crew fulfilling carry-out orders.

Numerous establishments in the Chippewa Valley reopened after state justices struck down the safer-at-home order, but other bars and restaurants were not yet ready to welcome customers back inside.

Owner Rolly Knusalla said he’d gotten a lot of phone calls after the ruling came down and then welcomed in customers, but it hadn’t been too busy.

In Chippewa Falls, Burly’s Bar owner Brian Krista waited until 1 p.m. Thursday to open as he had a few chores to do at his establishment at 19 E. Canal St. before it was ready to serve customers again.

The restaurant and bar at Lake Hallie Golf Club, 2196 110th St., needed an extra day before reopening its dining areas, starting service at 3 p.m. today. However, the restaurant noted it will limit its capacity by 50%, serving up to 50 people at a time with tables of no more than six people.

While the bar still had bottled beer and liquor stocked from when it was last open two months ago, the tap lines needed cleaning and fresh kegs of beer.

“A lot of things need to be done that I was preparing for on the 26th,” owner Joshua Prock said.

The bar announced Thursday evening that it will reopen today.

Hallie Bar & Grill, 1713 Highway OO, is planning to open as soon as possible, but didn’t have a date set as of Thursday morning.

Bar manager Mindye Snead said the business was waiting for more instructions from local health officials to guide its decision on reopening.

But employees were preparing for eventual opening by cleaning and making sure all supplies and procedures were in place to abide by recommendations from the U.S. Centers for Disease Control to operate safely during the coronavirus pandemic.

Many restauranteurs were waiting for Thursday afternoon news conferences from local public health officials before pushing ahead with plans for reopening.

That was the situation for Dooley’s Pub manager Rebecca Lehner, who said the sports bar at 442 Water St. would also still need time to train employees on new safety measures related to COVID-19.

“We need to get more staff back and make sure everyone is prepared with all the protocols,” she said.

Like other restaurants, Dooley’s Pub has been keeping a portion of its employees busy preparing meals for carry out and delivery.

“Although we’re VERY excited to open our doors, we have made the decision we will continue offering our delivery service and take out, but will not be opening our dining services until more guidance is given,” he wrote.

Zempel continued that he’s looking for direction from the local health department to make sure the business can reopen safely for the well-being of both customers and staff.

A group of Eau Claire restaurants and bars run by John Mogensen and Lisa Aspenson are opting to remain closed — except for take-out — until May 26 at the earliest.

Still viewing the coronavirus pandemic as a public health emergency, Aspenson said the continued closure is because there still isn’t enough testing available for COVID-19.

“We know that the virus is still here. Nothing has changed,” she said. “The safety of our staff, families and community is really the most important thing.”

Though the Eau Claire area has a relatively low number of reported cases, Aspenson said she’s seen reports of other areas that reopened and then had to close because of an increase in coronavirus.

While most employees from Mona Lisa’s, Mogie’s Pub, The Livery, Stella Blues, Stones Throw and The Red Room are currently not working, they are getting paid through the Paycheck Protection Program funded through the CARES Act.

“We’re able to pay our staff and we’re extremely grateful for that,” Aspenson said, adding that employees are the most important part of running the businesses.

“What we have decided to do is continue to offer the limited services at least through this weekend,” she said.

That means continuing the limited hours for take-out and delivery orders from the restaurants, which has been done with a small staff during the past two months. To fully open will require calling up employees to start scheduling them for shifts, if they are able to work while schools remain closed.

“Some people have children at home, so that may affect their ability to work,” she said.

Reopening also means stocking up on groceries and putting new precautions in place to protect employees and customers from spreading germs.

“It’s not as simple as turning a switch on,” she said.

Palzkill, who currently is board chairwoman of the Wisconsin Restaurant Association, noted the trade group has been giving advice on measures businesses should take.

The association noted there was no restriction on capacity set by the state, but advised restaurants to keep six feet of distance between tables and seat no more than six people at a table.

“Keep in mind that if restaurants and bars in your area do not do a good job with implementing reopening best practices, local health departments will likely take action to impose stay at home closures for your area,” the association wrote Thursday on its website. “It takes just a couple of bad examples to drive public concern.”