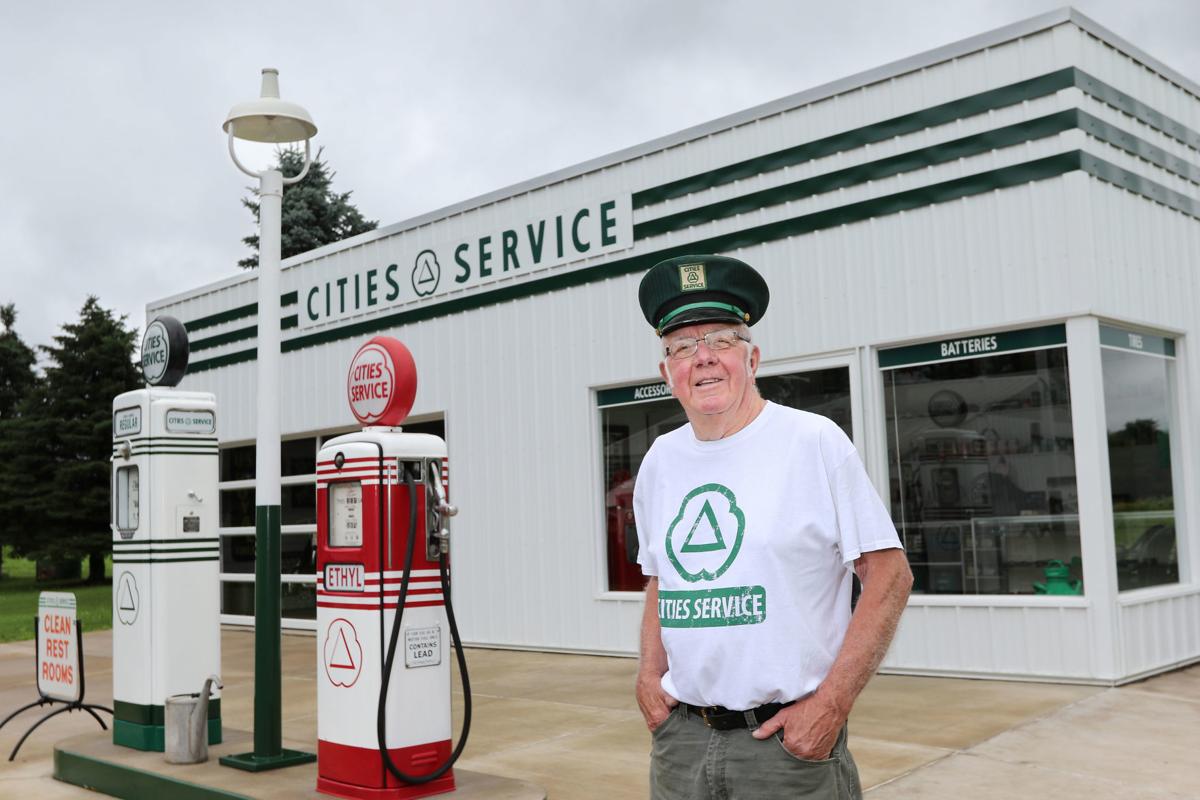 Bob Buss stands in front of a replica of Larry’s Cities Service gas station he, his sons and grandson built at his rural Chippewa Falls home. Buss worked at the station on Park Avenue in Chippewa Falls while in high school. View more photos at LeaderTelegramPhotos.com. 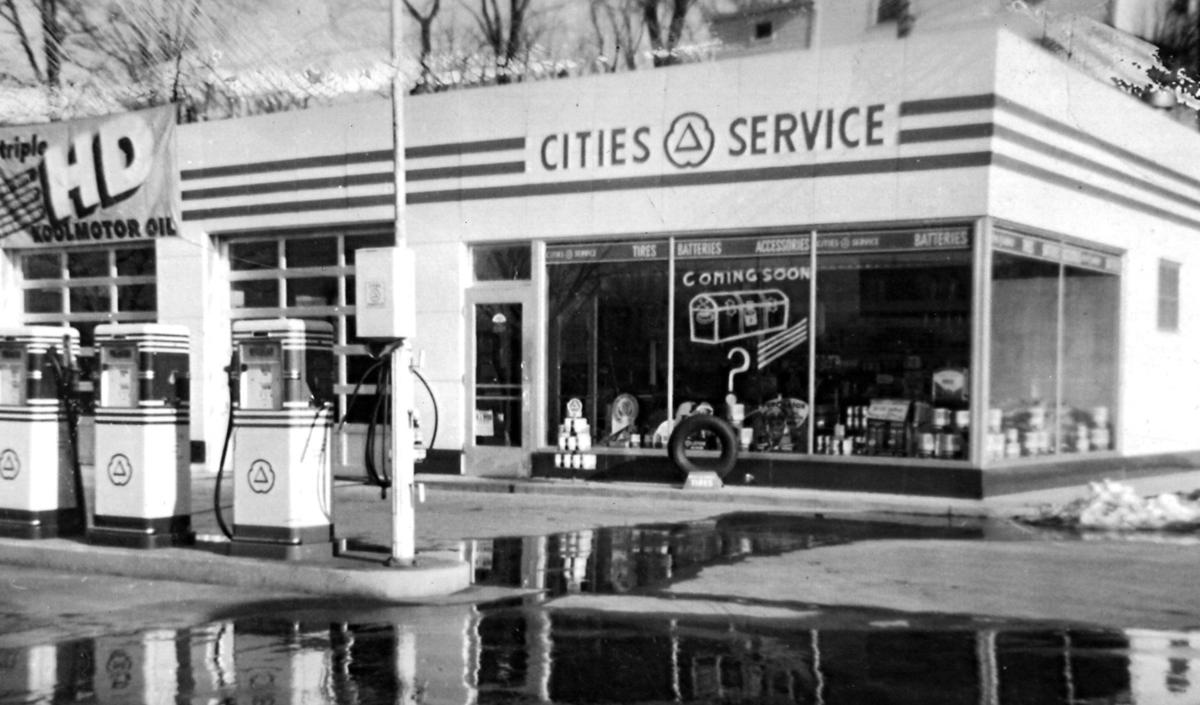 Back in high school, Bob Buss worked at Larry’s Cities Service gas station on Park Avenue in Chippewa Falls. Buss built a replica of the station at his rural Chippewa Falls home. 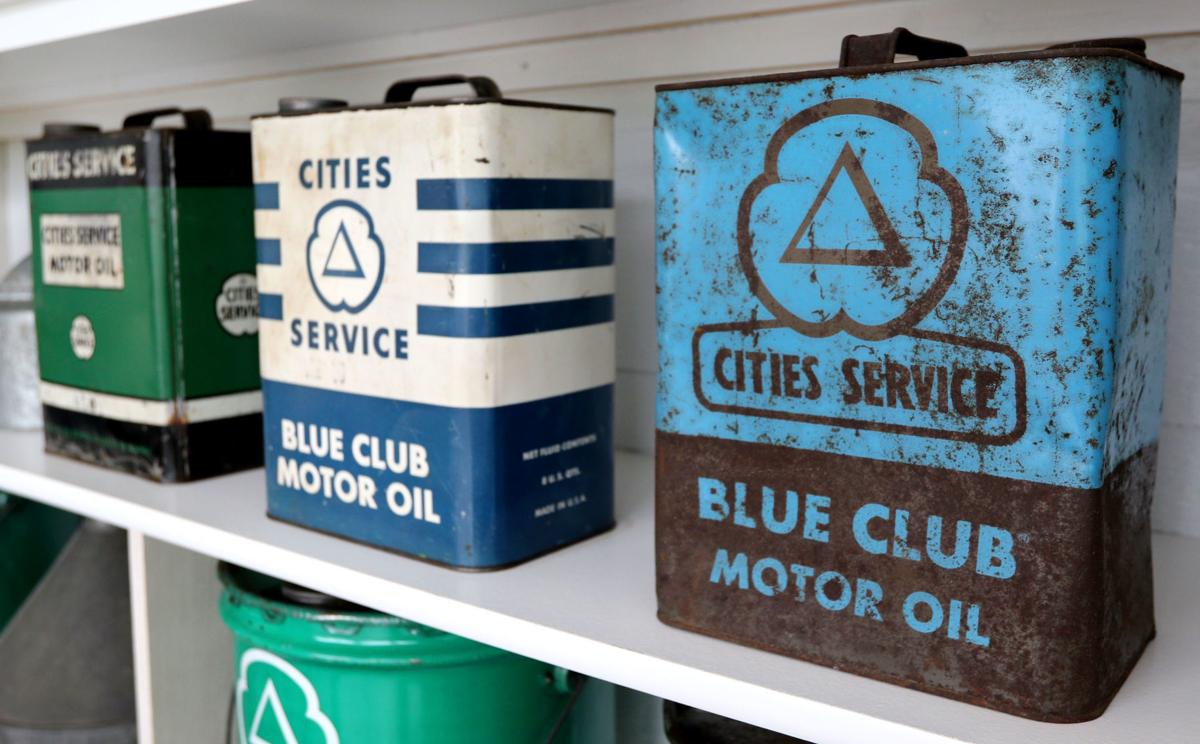 Bob Buss has memorabilia on display, like these vintage tins, in in the Cities Service gas station built at his rural Chippewa Falls home.

Bob Buss stands in front of a replica of Larry’s Cities Service gas station he, his sons and grandson built at his rural Chippewa Falls home. Buss worked at the station on Park Avenue in Chippewa Falls while in high school. View more photos at LeaderTelegramPhotos.com.

Back in high school, Bob Buss worked at Larry’s Cities Service gas station on Park Avenue in Chippewa Falls. Buss built a replica of the station at his rural Chippewa Falls home.

Bob Buss has memorabilia on display, like these vintage tins, in in the Cities Service gas station built at his rural Chippewa Falls home.

With the help of Bob’s other son, John, they built a replica of the Larry’s Cities Service gas station Bob worked at in high school, pumping gas, greasing cars, changing tires, washing windshields and checking oil.

“I had to have a place to store my old cars, so I thought I might as well make it look like a station,” said Bob, joking that his bride of 62 years, Mary Jo, now wants a “she house.”

Of course, the project didn’t surprise those who know Bob, including son Jeff.

“He has always loved cars, he worked at the station as a kid, and through the years, he’s collected Cities Service merchandise,” Jeff said.

The Cities Service Co. was formed in 1910 by Henry Doherty, according to the Oklahoma Historical Society. Designed to concentrate on public utilities, including electric, natural gas and transportation, Cities Service also became involved in the burgeoning petroleum industry.

In 1940, federal courts ordered Cities Service to divest itself of either its public utilities or its oil and gas firms. Because the oil and gas business was so lucrative, the company decided to separate from its more than 200 public utility companies.

In 1959, the Cities Service Oil Co., headquartered in Bartlesville, Okla., was formed to absorb all the oil companies owned by the original corporation.

The Chippewa Falls gas station — located on Park Avenue down the hill from Holy Ghost Catholic Church — opened in about 1949 or 1950, Bob recalled.

In front of the station stand two gas pumps Bob restored; the red one “sells” ethyl, or leaded, gas for 0.369, and regular is sold for 0.399 from the green one. (Bob didn’t set prices; that’s where they happened to be when he acquired the pumps.)

Next to the pumps, Bob set out a metal sign advertising CLEAN REST ROOMS acquired from another service station.

Inside the station, Bob has an abundance of Cities Service memorabilia on display, including a bottle opener, ice cream scoop and old photos below the counter, a box of matchbooks next to one of two cash registers and a map holder on the wall with maps of various states, including Wisconsin.

On the shelves behind the counter, Bob has assembled a variety of cans and tins, including old Cities Service Blue Club Motor Oil tins and cans of Trojan Grease. He also has copies of J.C. Whitney & Co. Automobile Parts & Accessories catalogs and “The Eager Beaver Story Book,” which dealers gave to kids back in the day; and a Cities Service toy tow truck from Meyers’ daughter.

In two corners of the office, Bob has a vintage Coke machine and green gas can; the latter was a gift from his wife.

Over the years, Bob has picked up memorabilia at swap meets, and people have given some of the items to him. This past winter, Jeff found some items on Facebook Marketplace, and when the seller — whose own father owned a Cities Service station — learned about Jeff’s dad’s interest, she sent him a box of stuff, saying Bob’s station “would be a cool place for her dad’s things.”

Bob stores three old cars — a 1937 Chevy truck from Bill’s Sheet Metal in Chippewa Falls, a ’39 Plymouth and a ’40 Ford — inside the service bay, which has an assortment of vintage signs hanging on its walls, along with original Cities Service invoices for fuel delivery to a dairy.

“I just like old stuff,” said Bob, a member of the Chippewa Valley Model A Club, who also keeps an old Cushman scooter, vintage tools and his old pair of rollerskates in his station, along with a calendar from 1957.

The 81-year-old’s love of vehicles began decades ago.

As a kid, he put together a couple of Whizzer motor bikes he found in a box, and he rode them around town until he got his driver’s license. Bob bought his first car — a ’40 Ford, not the one he currently owns — at age 15.

After graduating from Chippewa Falls High School in 1955, Bob went to work for W.S. Darley & Co. In 1965, he took at job at the former Uniroyal Goodrich Tire Co., retiring as machine shop foreman in 1992.

When Bob took the job at Uniroyal in Eau Claire, Mary Jo was cutting hair in Chippewa Falls, and they only had one vehicle, Jeff said. So, his grandmother gave Bob a truck she won — the 1937 Chevy, and he drove it back and forth. Years later, Bob rebuilt it, doing everything but the paint.

“The guy has the patience of a saint,” said Jeff, noting his dad, a retired machinist, often makes what he needs instead of buying it.

When they built the station, “he didn’t draw anything out,” Jeff said. “It was all in his head. That’s my dad to a T.”