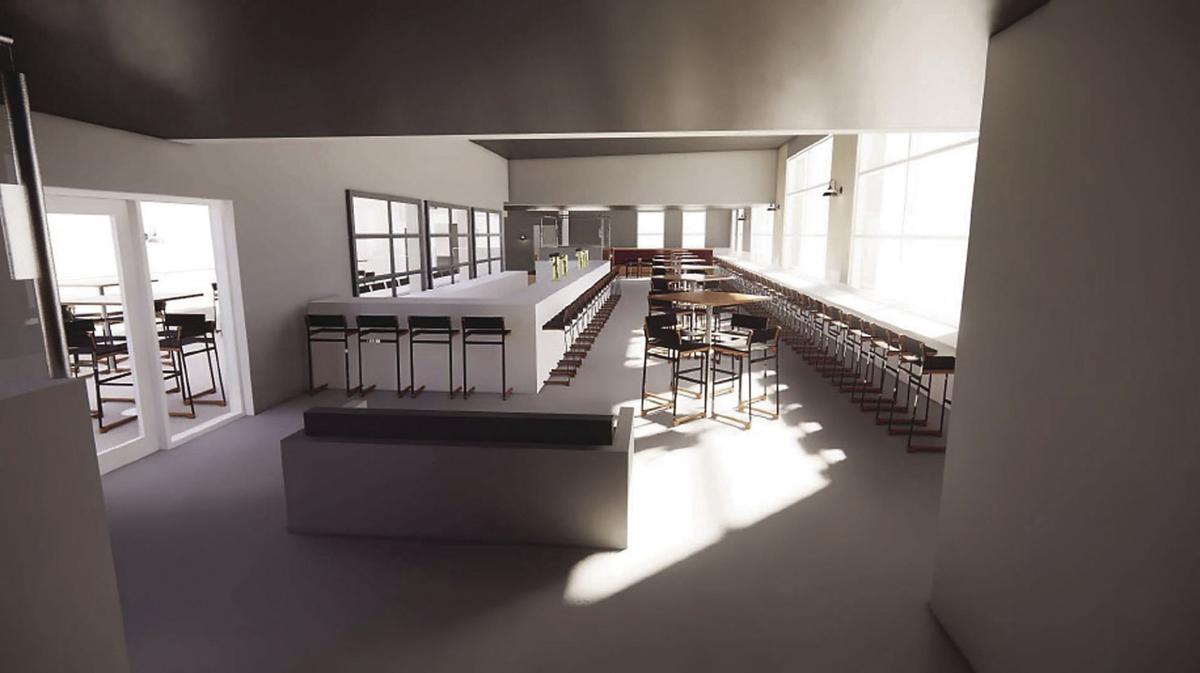 This rendering created by River Valley Architects shows the interior of a rooftop bar planned for the top of a landmark building at 204 E. Grand Ave.

This rendering created by River Valley Architects shows the interior of a rooftop bar planned for the top of a landmark building at 204 E. Grand Ave.

EAU CLAIRE — A rooftop restaurant and bar is being planned for a former bank building in downtown Eau Claire.

JCap Real Estate is seeking the city’s permission to create the tavern by adding a partial seventh story to the building at 204 E. Grand Ave.

“The Grand Rooftop Bar will be a moderately priced, 150-seat restaurant offering a one-of-a-kind experience in Eau Claire,” stated the project’s application to the city.

During its 7 p.m. meeting tonight, the city Plan Commission will decide whether to issue a conditional use permit to allow a rooftop bar in the downtown business district.

Plans for the project show both indoor and outdoor seating, including a row of barstools at a countertop along a west-facing wall to give patrons a view of the sunset. Glass walls used throughout the tavern will provide views of downtown Eau Claire and the Chippewa River.

About a third of the seating will be outdoors on the roof, and to make that area usable year-round the tavern will use propane heaters and tenting to keep it comfortable in colder seasons.

More than half the tavern’s sales are expected to come from alcohol, but it will also have a full menu including appetizers, flatbread pizzas, burgers, wraps, soups, salads and options for people with dietary restrictions.

The drink selection will have more than 20 craft beers on tap, including locally-made brews, and a menu of specialty cocktails.

The tavern would open daily at 3 p.m. and anticipates its clientele will include people who work, reside, shop and attend events downtown, including performances at the Pablo Center at the Confluence.

Recognizing that the bar will be in an area where there are numerous apartments, the business plans to strictly limit noise after 9 p.m., according to its application. This would be in the form of a curfew for large parties and asking loud late night guests to leave if they don’t quiet down after one warning. The tavern will also have noise-canceling panels and extra insulation to prevent sound from disrupting downtown residents.

If the tavern gets a conditional use permit tonight, it will still require additional approvals before it could happen.

The building —made in 1929 as a Scandinavian Fraternity House and later serving as local offices for Wells Fargo Bank — was deemed a local landmark in 2018, which means Eau Claire’s Landmarks Commission will need to sign off on adding the bar.

Also, the business would need a building permit before construction and a liquor license prior to opening.

JCap bought the building in 2015, and according to the company’s website it is in the process of turning it into 25 market-rate apartments, commercial space for lease and the rooftop bar/restaurant.

When leaders from Foxconn Technology Group visited Eau Claire in mid-2018, they talked about making a deal to buy the building from JCap to use as an innovation center. However, that deal never came to fruition. Foxconn did buy a large portion of the ground floor of another downtown Eau Claire building, Haymarket Landing, but that space remains empty.

• L.E. Phillips Memorial Public Library’s renovation and expansion project is seeking approval of its site plan. After the Plan Commission makes its recommendation, the City Council will hold a public hearing on March 8 before voting on the site plan the following day.

• A 62-apartment senior living facility slated for land on Old Town Hall Road next to the Fleet Farm gas station is asking for approval of its site plan.

• UW-Eau Claire’s planned repaving of an employee parking lot with about 275 stalls along State Street is seeking the commission’s approval.