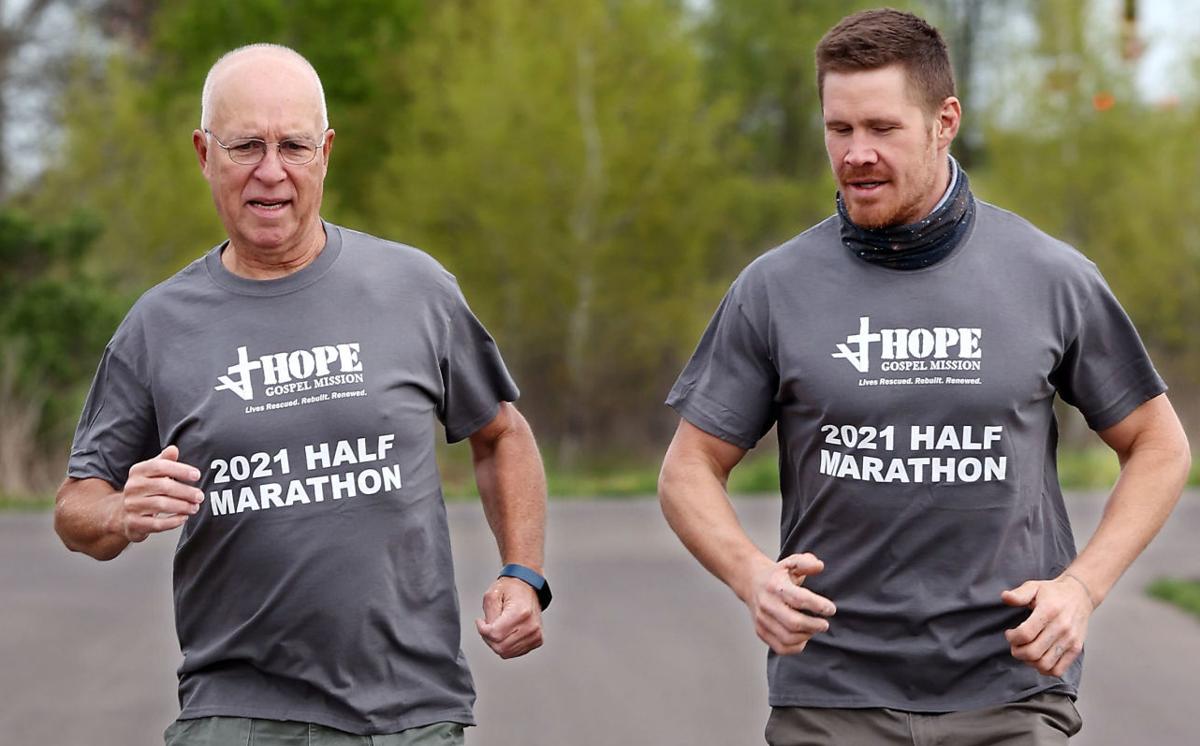 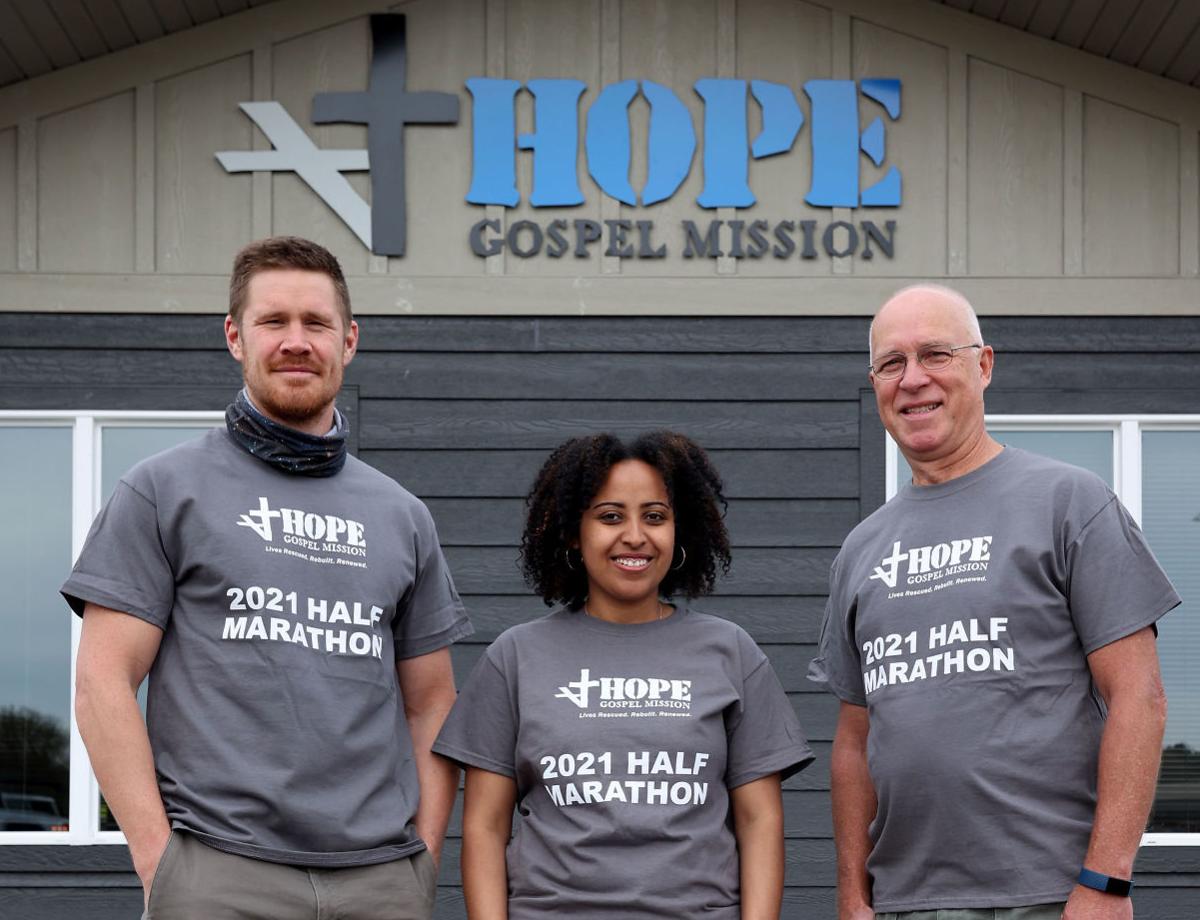 Hope Gospel Mission resident Jared Knutson, from left, administrative assistant Evening Snow and resident assistant Rich Chryst stand Friday outside of the Hope Renewal Center for Men, 2650 Mercantile Drive, in Eau Claire. For Saturday’s half marathon, Chryst organized the event and will run in it with Knutson while Snow is among the volunteers who will ride bicycles to keep runners on course and give them water and bananas.

Hope Gospel Mission resident Jared Knutson, from left, administrative assistant Evening Snow and resident assistant Rich Chryst stand Friday outside of the Hope Renewal Center for Men, 2650 Mercantile Drive, in Eau Claire. For Saturday’s half marathon, Chryst organized the event and will run in it with Knutson while Snow is among the volunteers who will ride bicycles to keep runners on course and give them water and bananas.

EAU CLAIRE — Jared Knutson has run many miles on his road to recovery.

On Saturday morning, he tacked on 13.1 more as part of a half marathon organized by Hope Gospel Mission for residents who have taken up running during their stay at the Hope Renewal Center for Men on Eau Claire’s west side.

“I’m probably in better shape than I’ve ever been before,” Knutson, 32, said Friday prior to the race.

After struggling through alcohol and drug addiction in his 20s with multiple stints of sobriety and relapses, Knutson went to Hope Gospel Mission on Aug 20, 2019, for help.

“I had been at rock bottom in my life and didn’t want to get back to rock bottom,” he said.

During his time in the mission’s Renewed Hope Program, he incorporated more physical fitness into his lifestyle as he went through recovery.

“When I got here, I was able to pay more attention to it and make it more of a focus,” Knutson said.

That included weightlifting, bicycling, running and other sports, usually alongside fellow residents who replaced old habits with healthy ones.

“There’s more to it than just the physical activity,” Knutson said.

While running the men share stories about their day, challenges they’re facing, lessons learned at the mission and talk about God.

The relationships created during those runs help support morale, Knutson said, acknowledging the long process of recovery includes both ups and downs.

“We want to lighten the load for these guys,” Knutson said. “Activities like this seem to do that.”

At first Knutson’s runs were just one to two miles, but he felt the urge to push himself farther. When he worked his way up to three- to five-mile range, Knutson would have aches and pains afterwards, but that didn’t deter him. Continuing to get stronger, his runs would stretch to seven and then 10 miles, ultimately leading to the 13.1-mile half marathon distance.

Seeing Knutson and others at the mission enjoy going on runs together, Rich Chryst, resident assistant at the men’s facility and an avid runner himself, thought it would be good to organize a race for them.

The residents had set their sights on running the half-marathon course in the 2020 Eau Claire Marathon, but that large May race was called off due to the coronavirus pandemic and they weren’t interested in doing a virtual race.

So instead Chryst, who enjoys participating in community road races, chose to put together a half marathon event just for the residents.

“I wanted to have something a little more official than a group run,” he said.

Chryst ordered T-shirts, got volunteers and used a course map from the Eau Claire Marathon to host the race for the nine Hope Gospel Mission residents who chose to run it in early October.

On Saturday they did it again, this time with about 14 runners accompanied by volunteers on bicycles who kept them on course and would hand them water bottles and bananas along the way.

Chryst, about to turn 64 next month, was among the runners and glad he was able to join the residents he cares for at the Renewal Center.

“I’m here to help these men on their path to becoming the men that God wants them to be,” he said.

Both Knutson and Chryst believe that good physical health does a great deal to help people recovering from addiction.

“A healthy mind and body will lead to much better long-term success,” Chryst said.

Knutson noticed that residents who work on their physical health have a higher tendency to complete Hope Gospel Mission’s recovery program and graduate from it.

The enthusiastic and affable Knutson has already graduated from Renewed Hope but continues to live at the mission through its Discipleship Transitions Program, which allows those who have gone through recovery to stay a year longer to serve as a leader and mentor to other residents.

Other residents go on runs daily, but Knutson said his job — working for a Chippewa Falls company that installs freight elevators and conveyor systems throughout the Midwest — means he now has to fit exercise in around his work schedule.