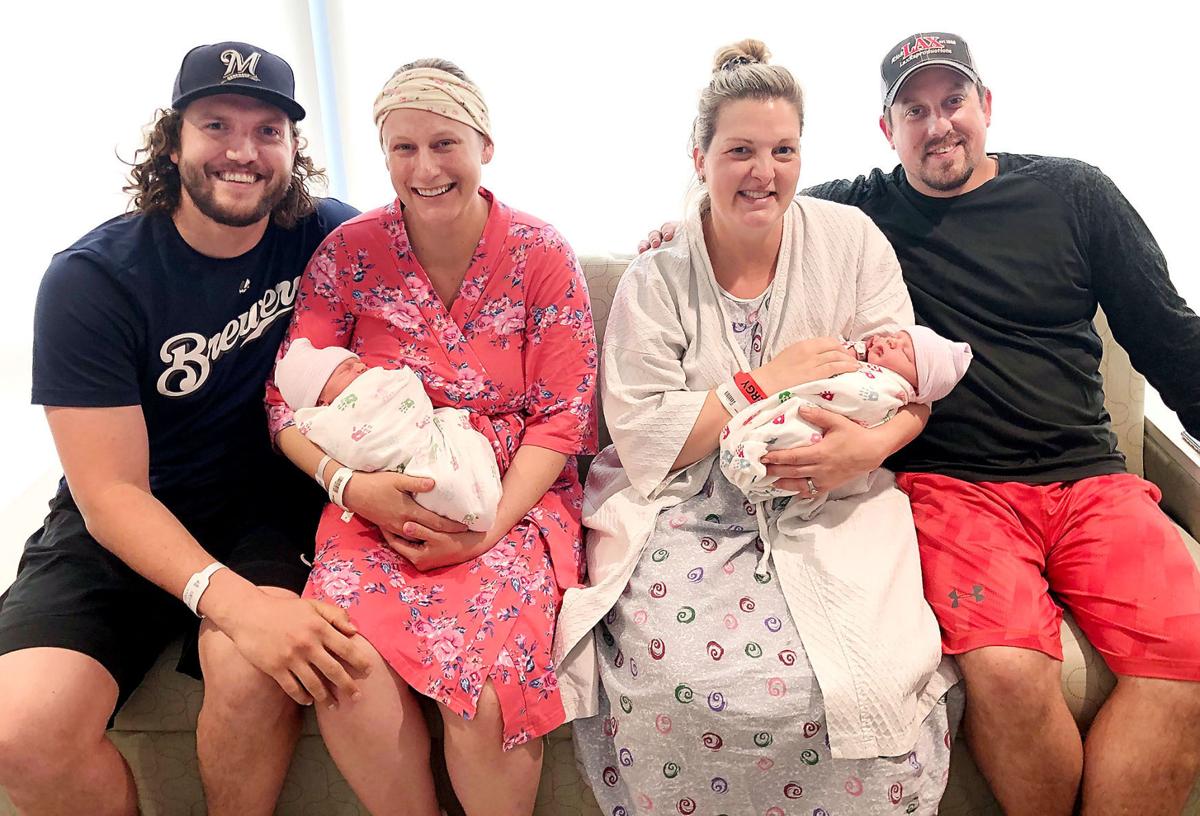 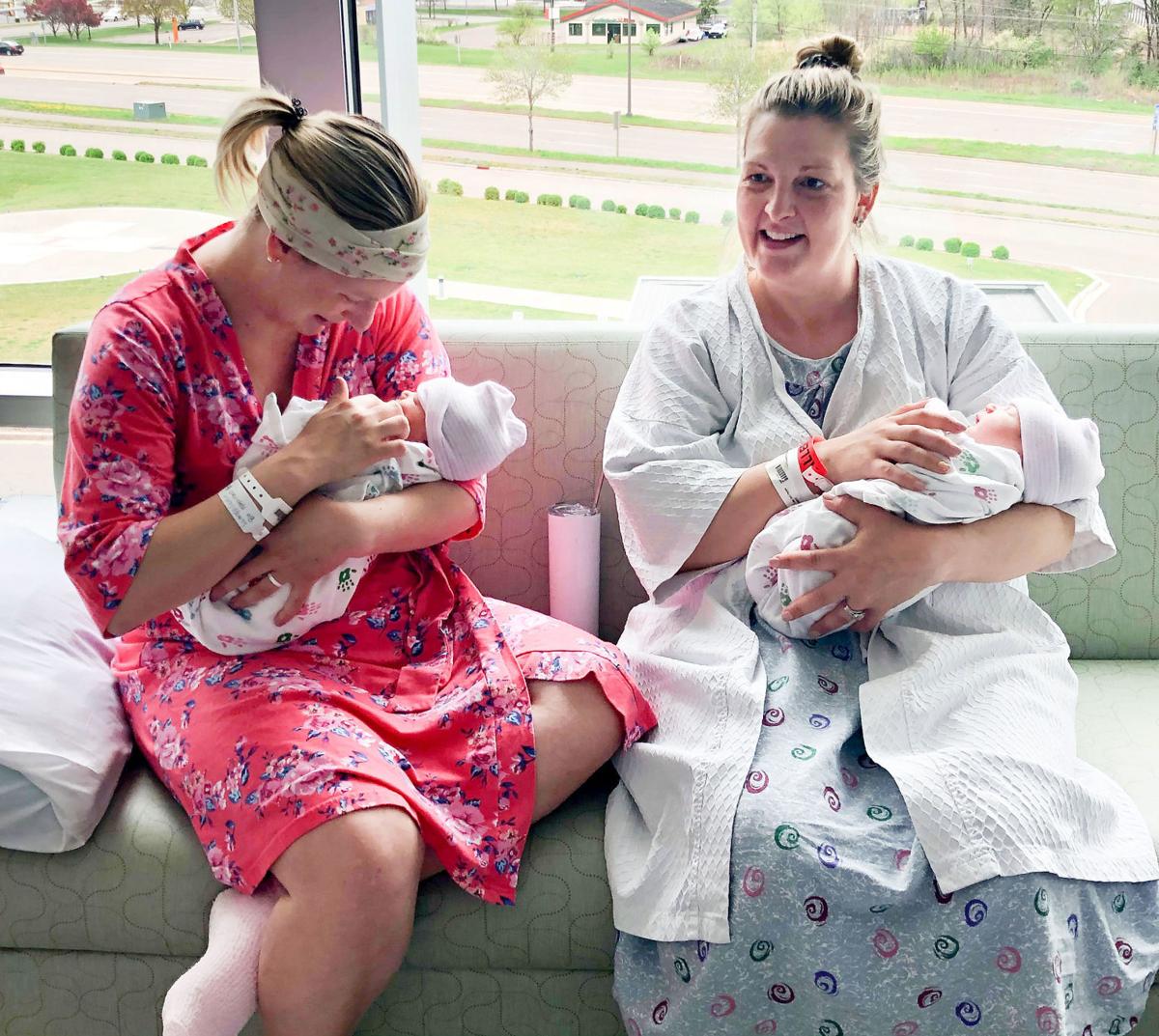 The happy coincidence occurred not only on the same night but in the same place and with the same certified nurse midwife tending to the new moms.

The momentous day ended with Katie Ross, 34, of Elk Mound, giving birth to a son, Finley, at 6:40 p.m. and her sister-in-law, Caitlin Luttropp, 27, of Eleva, delivering a daughter, Mave, at 8:17 p.m. two rooms down the hall at Marshfield Medical Center-Eau Claire.

Throughout the day, the husbands, Matt Ross and Katie’s brother, Jacob Luttropp, hopped back and forth between the rooms so they could keep the expectant mothers updated.

Yet it wasn’t supposed to be this way.

Though the couples regularly joked about the possibility of giving birth on the same day, they didn’t think it would really happen: Caitlin was due Monday, May 3, but Katie’s due date wasn’t until more than a week later on Tuesday, May 11.

The day began with Caitlin already in the hospital and Katie experiencing contractions that she assumed must be Braxton Hicks false labor because she hadn’t had any previous signs that delivery could be imminent — Katie even worked as a Marshfield Clinic Health System athletic trainer Friday night at a North High School football game and again Saturday at a baseball doubleheader. But then her water broke at 5:30 a.m.

By 10 a.m. Sunday, Katie and Matt headed to the hospital, where Caitlin had already been in labor since the previous night.

Matt said every time he gave Katie’s mom an update, she’d say, “You guys are catching up,” while Caitlin cracked that Finley was “cutting in line.”

“I said, ‘This can’t be happening today. It’s Jacob and Caitlin’s day.’ But they had other plans,” Katie said, grinning at the newborn cousins.

While cuddling Finley, Caitlin cooed, “But you got your eviction notice and said, ‘I’m outta here.’ “

At one point during the joint labor, Marshfield Medical Center nurse midwife Kirsten Handley was coaching Caitlin through some pushing when a nurse rushed in and said Handley was needed down the hall.

As Katie quickly approached the moment of truth, her thoughts turned to her sister-in-law.

“I kept saying to the midwife, ‘Do you need to go check on Caitlin?’ I felt really, really bad,” Katie said.

For her part, Handley said the evening represented a first for her as well, even after 14 years as a midwife and more than 20 years of working in labor and delivery.

“I’ve had busy nights before, but not one where a brother and sister were both having their first children on the same night one room away from each,” Handley said. “It was a fun night.”

Handley said she went back and forth between the two patients’ rooms all day. After ensuring that all was well after Katie delivered Finley, Handley said she immediately ran back to Caitlin, who resumed pushing and promptly delivered Mave.

“It’s always an honor to be with women and their partners for such a life-changing experience no matter if it’s their first baby or their fifth,” Handley said. “But to be present for the birth of two cousins on the same night, basically the same moment, and to know that it’s the first baby for both brother and sister, it was just so cool. Those cousins will have a lifetime of experiences together.”

The two couples reunited Monday morning, with the moms sharing a hug and introducing the new cousins, both wrapped in blankets decorated with colorful hand prints, for the first time.

“That’s fine. You don’t have to apologize,” Caitlin replied, excitedly adding, “They look so much alike.”

As they took turns holding the newborns, a sheepish Jacob admitted he had to check the wristband for the words “baby boy” to know for sure he was clutching his new nephew.

Throughout their pregnancies, the two moms had been in touch frequently to compare symptoms, discuss their medical appointments and share their parenthood journeys. The couples even took virtual birthing classes together, as their entire pregnancies took place during the COVID-19 pandemic.

“We do everything together,” Caitlin added.

That togetherness even extended to breaking the news to family members about their pregnancies on the same day, although even that wasn’t by design. It happened spontaneously one night after Katie and Matt announced their big news on a family video call.

“I looked over at Caitlin, and we hadn’t told our parents yet, and said, ‘Well, we might as well just tell them now that we’re pregnant also,” said Jacob, who missed sharing Katie’s birthday by two days.

“We announced our pregnancies together and now we can announce our births together,” Caitlin said, igniting another round of laughter.

When the group was asked if they expect the cousins to be buddies as they grow up, Katie responded, “Absolutely.”

“I don’t think they’ll have a choice,” Caitlin added with a chuckle.

Jacob, a nurse in Marshfield Medical Center-Eau Claire’s intensive care unit, speculated about a future for the cousins filled with joint birthday parties and possibly even matching ponies, as the Rosses already raise horses.

Both moms expect to be discharged today.

No word yet on when the first sleepover will be, but the new parents agreed it’s only a matter of time.