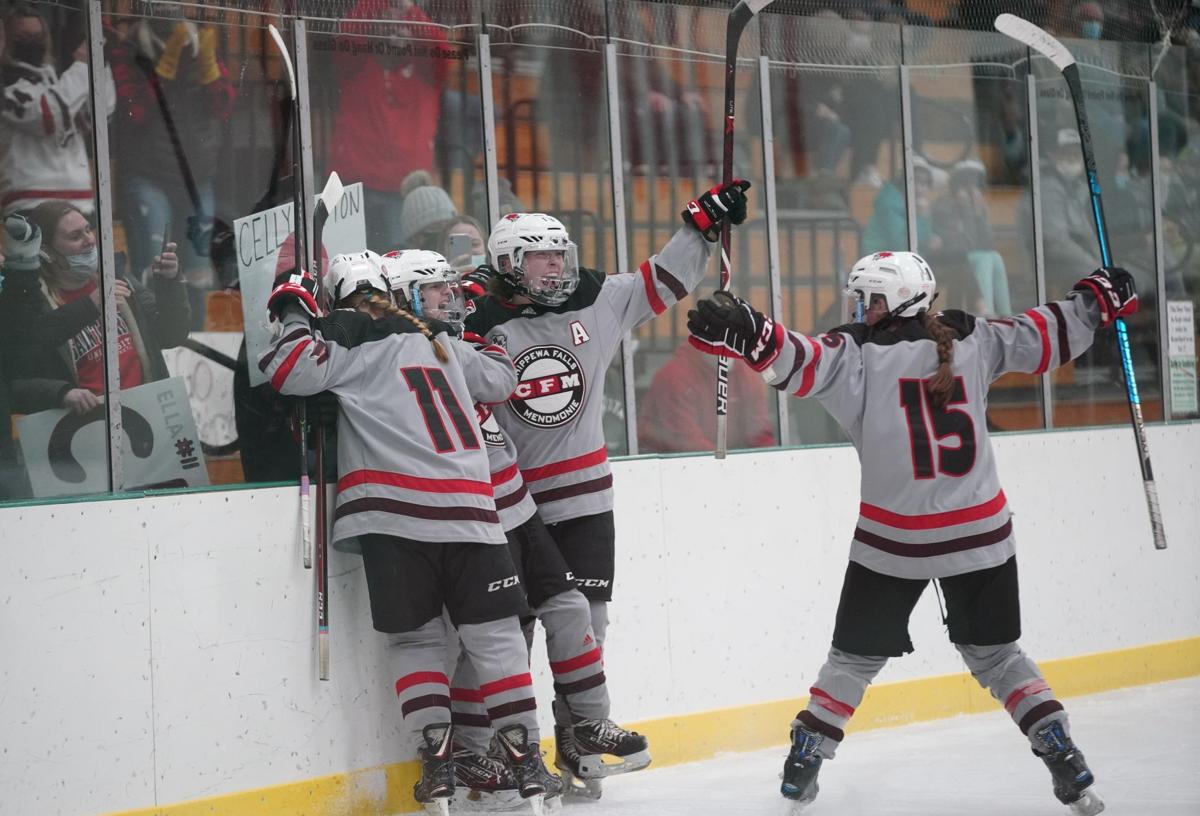 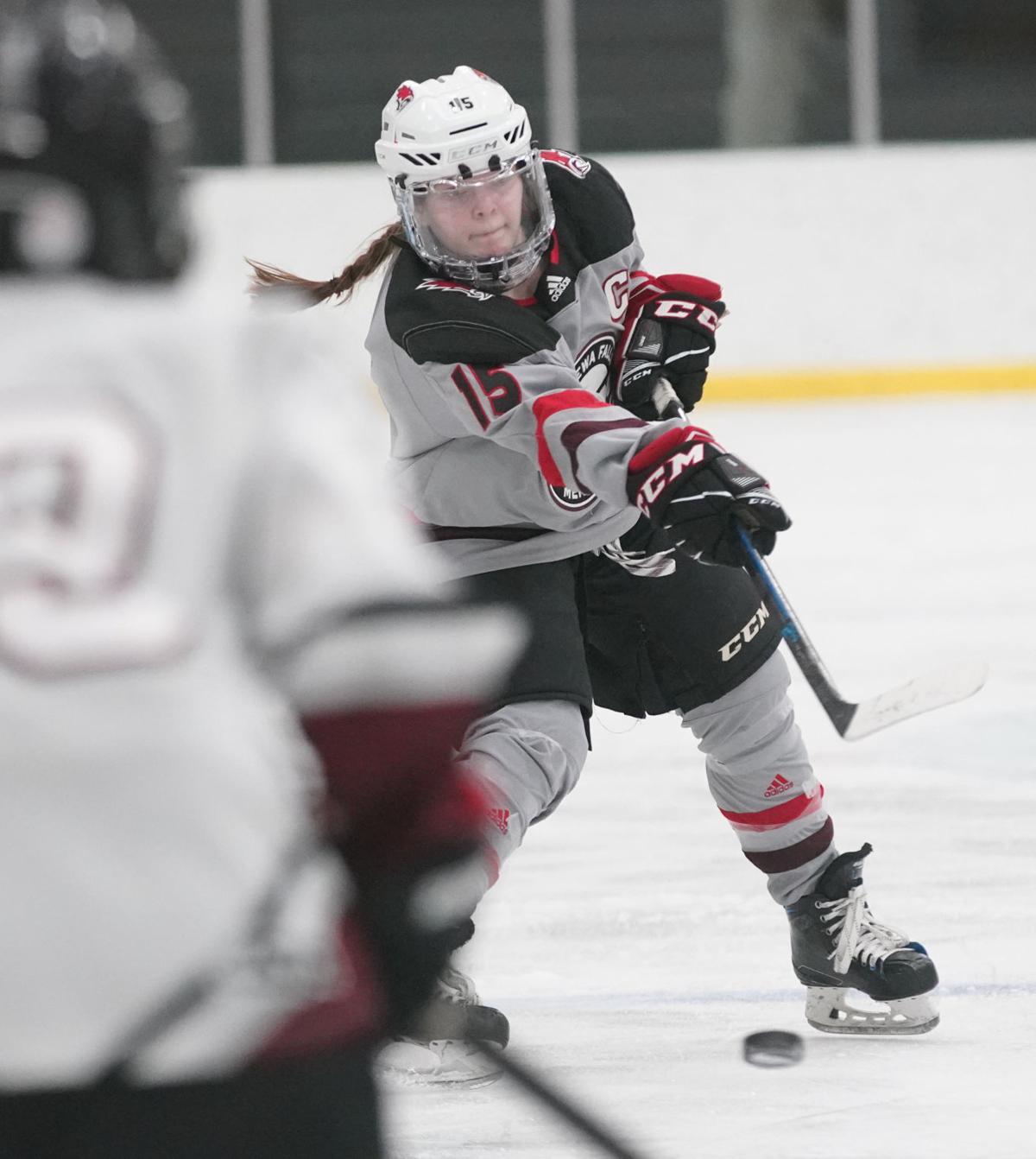 SCHOFIELD — In a game full of back-and-forth responses, only one team could have the final answer.

Chippewa Falls/Menomonie gladly got in the last word. And as their reward, the Sabers will play for a state championship.

Emma-Lyn Stephenson rocketed the game-winning goal into the net from a tight angle, giving the Sabers a 4-3 overtime win over Central Wisconsin in the state semifinals on Wednesday.

It’s been a season full of firsts for Chippewa Falls/Menomonie. The latest: a chance to bring home a state championship for the first time ever. The Sabers will play University School of Milwaukee on Saturday in Wisconsin Rapids with a title on the line.

“It hasn’t quite hit me,” CFM coach Tony Menard said. “I was so shocked that puck went in that my mind’s just with the girls and how excited they are. We’re just trying to enjoy the moments each time we get the opportunity to.”

The Sabers held a one-goal lead over the Storm three times, and each time Central Wisconsin wiped it away with a goal of its own. But in sudden-death overtime, there wouldn’t be an opportunity for another rally.

CFM got a power play with three and a half minutes left in overtime. With time beginning to run out on the Sabers’ skater advantage, Stephenson weaved the puck across the ice toward the left corner of the rink. Her angle was narrow, but she still fired a shot on goal.

It turned out to be a gamble worth taking.

The puck whipped over the shoulder of Storm goalie Chloe Lemke and hit the twine, and the Sabers mounted a celebration worthy of a state tournament victory.

“It does not feel real. As freshmen, we only won six games,” senior Abigail Martin said. “I said earlier this year that it’s really nice to have a team that can tie the knots. We just tied the knot.”

The Sabers are playing at the state tournament for the first time as this version of its co-op. The program went to state in 2007 and 2008 as Chippewa Falls/McDonell, finishing as runner-up in 2007.

But as Chippewa Falls/Menomonie, this is the first time the co-op has gotten to this point. And they have no intention of stopping now.

“This was a game that could have slipped through our fingers,” Martin said. “To take the upper hand in it really gives each one of our girls a boost.”

The Sabers led several times in the semifinal, but the Storm refused to go away.

Sidney Polzin, the newly-crowned Ms. Hockey in Wisconsin, was clinical in putting away the game’s first real scoring opportunity. With the puck a few feet off to the left of the net, the senior sneaked a wrister over the shoulder of Lemke to put the Sabers up 1-0.

Twice after the Storm had rallied to tie the game in the second period, the Sabers seized the lead back. When Lauren Ellis sniped a shot past CFM goalie Caroline O’Dell early in the period to tie it at 1-1, the Sabers found their answer in Martin’s goal from the blue line seven minutes later. Martin slid it in from long range, hidden from Lemke’s sight line.

McKenna Kaczor slapped a rebound home to even the score at 2-2 later in the frame, but CFM’s Addison Frenette had an immediate response. Just 13 seconds later, the sophomore knocked one into the back of the net to reestablish the Sabers’ lead.

Central Wisconsin had one more response in it in the third period when Logan Crawford knocked in a shot from right in front of the net.

“They didn’t give up,” Menard said. “Everyone was working as hard as they possibly could. No one wanted this to be their last game. Fortunately for us, we were just able to get that one extra bounce tonight and get that puck in the net.”

Central Wisconsin had a chance to punch its own ticket to the state title game early in overtime. The Storm had a breakaway with just the goalie to beat, but O’Dell came up with a huge stop to keep the Sabers alive.

Stephenson made sure it would be her side moving on shortly after the big save.

“Emma just gave a great individual effort,” Menard said. “We were talking about just getting pucks on the net into the upper corners and seeing what happens. That’s what she did and the puck went in. The rest is history.”

The third-seeded Sabers (13-6-1) will meet the fourth-seeded Wildcats (18-3) at noon on Saturday for the championship.

CFM is hoping it can add one final first to the list this season.

“Milwaukee’s going to bring it,” Martin said. “If we play like we played tonight, I definitely think Saturday can be in our hands. It’s so exciting. It’ll be a good game”