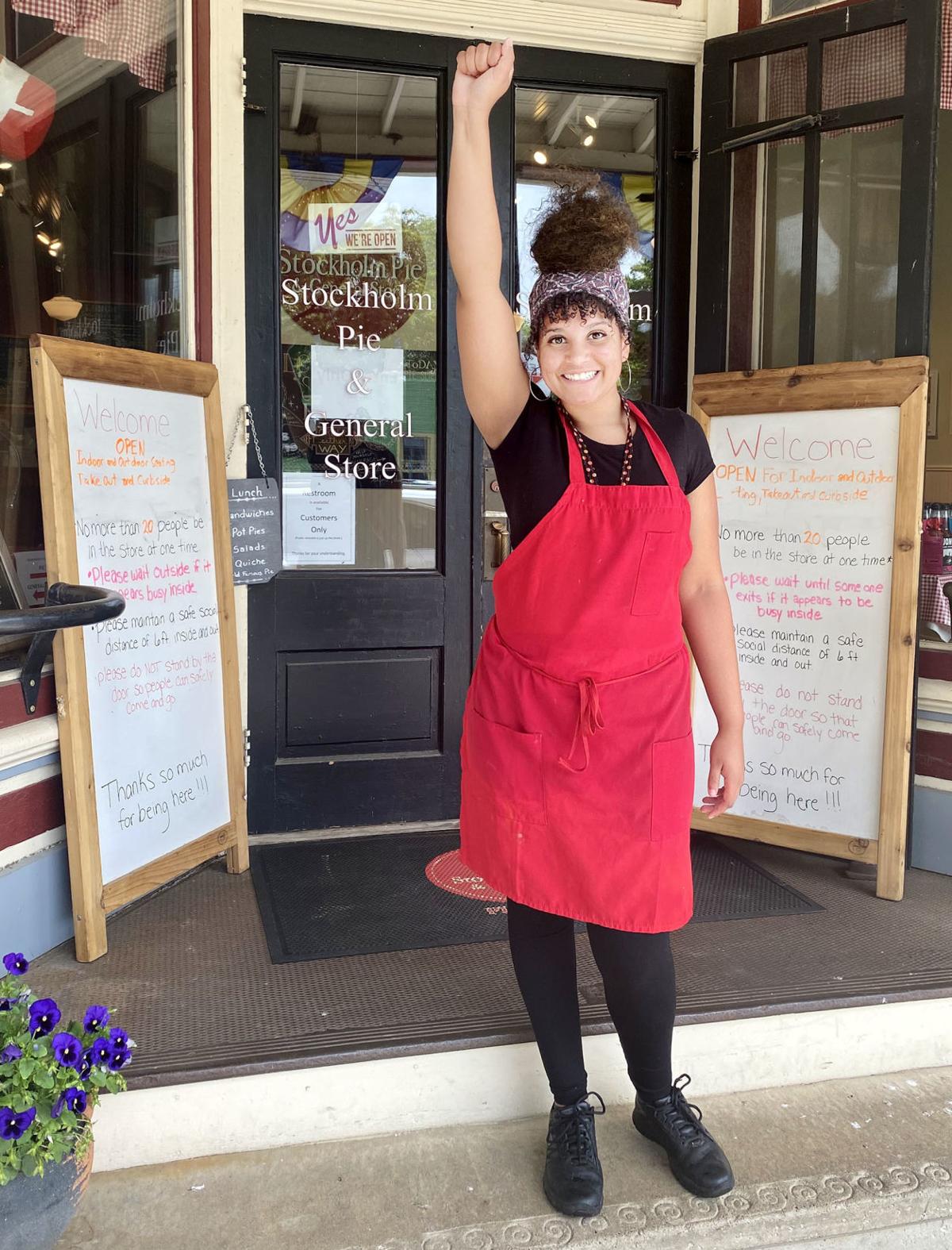 The public and her employer have rallied around 16-year-old Lily Stegemann of La Crosse since she was the target of racist comments recently by a customer at Stockholm Pie & General Store in the Pepin County village of Stockholm. 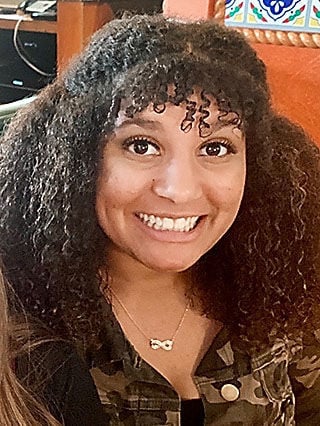 Lily Stegemann says she was hurt when she was the target of racist comments this month at her job in Stockholm, but she has been buoyed by the support she has received since the incident.

The public and her employer have rallied around 16-year-old Lily Stegemann of La Crosse since she was the target of racist comments recently by a customer at Stockholm Pie & General Store in the Pepin County village of Stockholm.

Lily Stegemann says she was hurt when she was the target of racist comments this month at her job in Stockholm, but she has been buoyed by the support she has received since the incident.

Lily Stegemann was just doing her job earlier this month when she involuntarily was thrust into the raging national debate on racism.

The 16-year-old La Crosse high school student, who is staying with her grandmother in Pepin this summer and working full time at Stockholm Pie & General Store, was busing tables when she became the latest U.S. victim of racism.

As she was clearing a table, the biracial teen noticed a middle-aged white couple staring at her and asked if there was anything she could do to help them. The man asked if Lily had cleared their table. When she said she had, they told her they wouldn't sit at a table she had touched and wouldn’t eat at a place that hired “her kind” before walking out.

A stunned Lily squelched the hurt and finished her shift, pausing only to text her mother, Julie Stegemann, that "being judged by the color of my skin was the lowlight of my day."

What happened next, in the wake of the ugly incident, was nothing short of beautiful.

After her mother persuaded Lily to tell her employer about the incident, Stockholm Pie co-owner Alan Nugent was so outraged that he decided to call out the racism on Facebook.

"There are times you must speak out. These are those times," Nugent wrote on the shop's Facebook page before describing the incident. He said the business was fortunate to have Lily as party of its family and characterized her as "an awesome young lady" who was the victim of "blatant hatred."

"No young person should ever have to deal with this," Nugent continued. "Sadly, it's not an isolated experience for her and others. Our family here is filled with straight, white, gay, senior, young and black people. They are all loved and valued. They all matter of course … But in our world, we need to say it out loud. Black Lives Matter. Her life matters."

Some would say that's the easy part — criticizing acts of overt racism.

But Nugent took it a step further, going so far as to discourage racists from patronizing his establishment.

"If you believe the way those folks do," he wrote, "Do. Not. Set. Foot. Here. You are not welcome. She is not keeping silent, and neither will we. Lily, we got your back."

"We hoped to put out a post that showed this amazing young lady that she mattered, that these cowardly people who said these things were not the only reality in this world," Nugent wrote in a followup post. "And you all did ... and she has read every word."

The positive reaction only intensified when Nugent attempted to create some light out of the darkness by launching a fundraiser to help pay for Lily to attend college. In the first week, The Lily Fund raised nearly $3,000 toward its goal of $10,000.

"I was really, really shocked at all of the support I've gotten and how many people reached out to me and told me to keep pushing," Lily said. "Then when my manager told me they were going to start a fund to help make my dream of going to college a reality, I was blown away."

But Lily, who aims to become a defense attorney and represent incarcerated individuals who didn't receive a fair trial, is no ordinary teen. She immediately told Nugent she wanted to give half of any money raised to other young people who have been victims of racism or need help paying educational costs.

"My motivation was I'm not a receiving type of person. I'd rather earn it," said Lily, who plans to put her tips toward buying a car and save her wages in a college fund. "It's not that I don't appreciate it because I do, but I just don't feel like I deserve all of that. There are other people out there who deserve this too. Since my whole goal in life is to help people, I decided why don't I start making a difference now."

Nugent said he has been pleasantly surprised that all of the Facebook comments have been supportive of Lily and Stockholm Pie, with his only reservation being that he fears too much attention has been directed toward the business.

"This was never about us," he said. "It was about calling out some racist jerks and pointing out the fact that this still happens in our world."

Even far from the big city. Even in a popular west-central Wisconsin tourist destination with a population estimated at 64.

Lily said the racist incident was painful and went way beyond the race-based bullying she endured as a child about her curly hair. Sadly, the hateful look she got from the man making the comments is burned into Lily's memory.

"He didn't even look at me like a person," she said. "I've never experienced that much hate and total disgust thrown at me for something I had no control over."

What made it worse is that she was at work and not engaging in any activity that anyone might question, Lily said, adding, "The fact that I can't even do my job without it being OK is what blew my mind."

The traumatic experience prompted her to write a poem for her mom in which Lily stated, "My skin is not a weapon."

The poignant words brought Julie Stegemann to tears and moved her to urge Lily not to stay quiet.

"Given the world today and what's going on right now, I encouraged her to stand up and talk to her bosses," Stegemann said.

With protesters calling for racial justice across the country since the May 25 death of George Floyd in Minneapolis, Lily's story quickly became a regional chapter in the national reckoning over racism in America.

The death of Floyd, an African American man killed when a white officer kneeled on his neck for nearly nine minutes after he has taken into custody on suspicion of using a counterfeit $20 bill, heightened Nugent's awareness, especially as a former Minneapolis resident.

"We've always believed this, but I'm a white male so I live in a completely different world than the average African American in this country," he said. "I don't think I realized that as much until I saw Minneapolis burning ... and saw the anger and resentment in this place where I lived for decades."

So when he saw a racist act in his tiny, liberal adopted hometown, Nugent knew he had to take a stand.

"There is a saying out there that silence is complicity. If you don't speak out, you're part of the problem," said Nugent, who wants to be part of the solution and plans to put up signs at the pie shop indicating that folks with racist views are not welcome.

Nugent insisted he isn't worried about the potential negative business impact of deterring any customers who don't support his stand. What's important, he said, is that it's the right thing to do.

Stegemann said the outpouring of support for her daughter has been overwhelming, both from residents commenting on Facebook and from the Stockholm Pie crew.

Seeing how Lily has responded to adversity also has made Stegemann swell with pride.

"She's kind, intelligent and compassionate, just an all-around great kid," Stegemann said. "I'm awestruck by what she's doing and how she's handling it all."

Between the scholarship fund and all of the public stands against racism, Lily is pleased her story, unlike so many others involving racist actions, appears to have a happy ending.

"It was a really, really bad experience that I guess has turned out to be pretty amazing," she said.

But Lily wants more. She knows the fight for racial justice is far from over.

Lily said she hopes her experience creates more awareness about the continuing scourge of racism and inspires others to speak up when they encounter it.

"This is not 20 years ago," she said. "This is right now, and something needs to change."

Well said, Lily, and thanks for your courage in speaking up to help make that change happen.