The McPhee Center sits mostly empty prior to a UW-Eau Claire women’s basketball game against UW-La Crosse on Wednesday, Feb. 3. 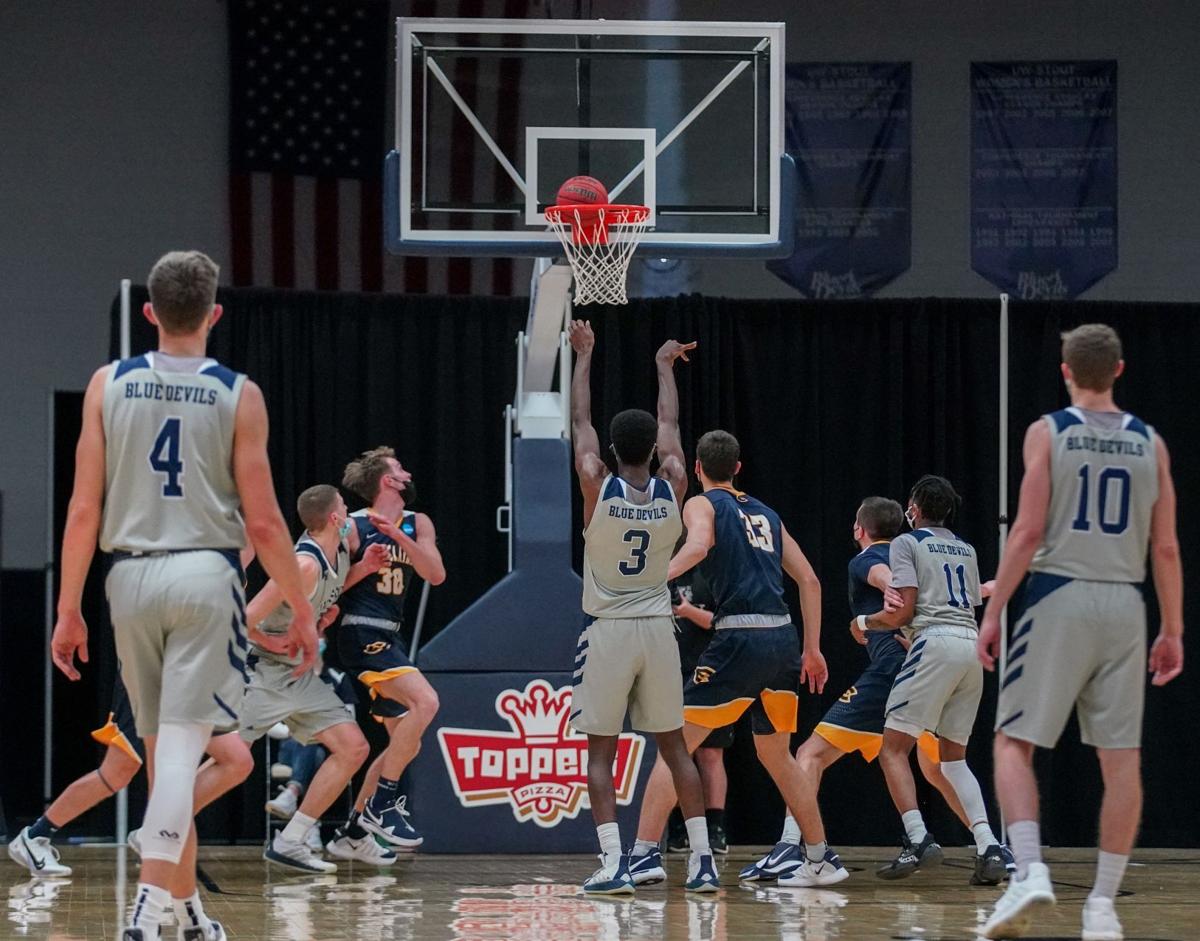 UW-Stout's TYreese Alexander shoots a free throw during a men's basketball game against UW-Eau Claire on Wednesday, Feb. 10 in Menomonie.

The McPhee Center sits mostly empty prior to a UW-Eau Claire women’s basketball game against UW-La Crosse on Wednesday, Feb. 3.

UW-Stout's TYreese Alexander shoots a free throw during a men's basketball game against UW-Eau Claire on Wednesday, Feb. 10 in Menomonie.

UW-Eau Claire has canceled the remainder of its men’s basketball season due to COVID-19 protocols, the school announced Monday.

The Blugolds were scheduled to conclude the regular season with games against UW-Oshkosh on Wednesday and Friday before turning their attention to the WIAC Tournament.

“So tough for our guys, Oshkosh, and River,” UW-Eau Claire assistant coach Matt Bessen tweeted following UW-EC’s release. “Heartbreaking to end a season like this. I’m reminded of some great advice though... ‘If this is the very worst thing that ever happens to you, you will have lived a charmed life.’ Excruciating, but the main thing is health/safety.”

Cancellations for the squad began last Friday, when its scheduled home game against UW-River Falls was not played. UW-Eau Claire Athletic Director Dan Schumacher said that decision was made after the school learned a student-athlete tested positive for COVID-19 using the antigen method. That positive was later confirmed via a PCR test.

Blugold basketball teams have been tested two to three times a week depending on the game schedule.

Schumacher said WIAC protocols require a team to quarantine for two weeks after a positive PCR test. With the WIAC Tournament scheduled for next week, the team was forced to prematurely end its season.

“I feel bad for our student-athletes on the men’s basketball team, especially one of the individuals who seems to be shouldering it, and it’s not fair,” Schumacher said on a Zoom media availability Monday. “It could happen to anybody. I think our student-athletes have shown great due diligence in staying by the protocols.”

The team played UW-River Falls on Wednesday before Friday’s cancellation. Schumacher said he’s had detailed conversations with UW-RF AD Crystal Lanning, who told him the Falcons underwent contact tracing over the weekend by reviewing the game film.

The UW-Eau Claire men’s basketball team finishes the season at 2-3 with a pair of victories against rival UW-Stout.

“Feel for (UW-Eau Claire men’s basketball),” UW-Oshkosh coach Matt Lewis tweeted. “Brutal way to have to end the season. Cannot be an easy thing for their players and coaches.”

Schumacher said Monday’s news has no effect on UW-Eau Claire’s other programs.

“Everybody else tested negative on Friday,” Schumacher said. “This is an isolated incident. The people that live with the individual are being quarantined and they’re getting tested. The team will continue to get tested until there’s at least two (negative) test results before we can even consider them coming back into the classroom and things like that.”

Men’s basketball teams were split into two divisions this year to mitigate risk of COVID-19 spread. Teams were scheduled to play eight regular season games, six against their three division foes and two against a member of the opposite division, before all eight WIAC teams participated in the conference tournament.

The WIAC Tournament, which begins play Monday, features cross-divisional matchups. Each division’s No. 1 seed will meet the other division’s No. 4 seed, while the No. 2 seeds will host the opposite division’s No. 3. Schumacher said UW-Eau Claire men’s basketball will volunteer to move to the No. 4 seed in the West to allow the East Division top seed to receive a bye.

That move would push UW-Stout up to the No. 3 seed.

The NCAA canceled all winter tournaments this year due to a lack of school participation.

UW-Eau Claire men’s basketball is the second WIAC program forced to sit out of the conference championships, joining UW-Whitewater wrestling.

The Blugolds entered this winter knowing it could come to an end at any point. While the worst-case scenario has happened to men’s basketball, Schumacher said the school’s approach to the pandemic remains the same.

“Just continue to educate the kids, staying at home, wearing a mask all the time, follow all the protocols,” Schumacher said. “Don’t be that one, don’t be the person that gets it shut down. Unfortunately that does happen. We’ve just got to keep educating, keep working with them.”