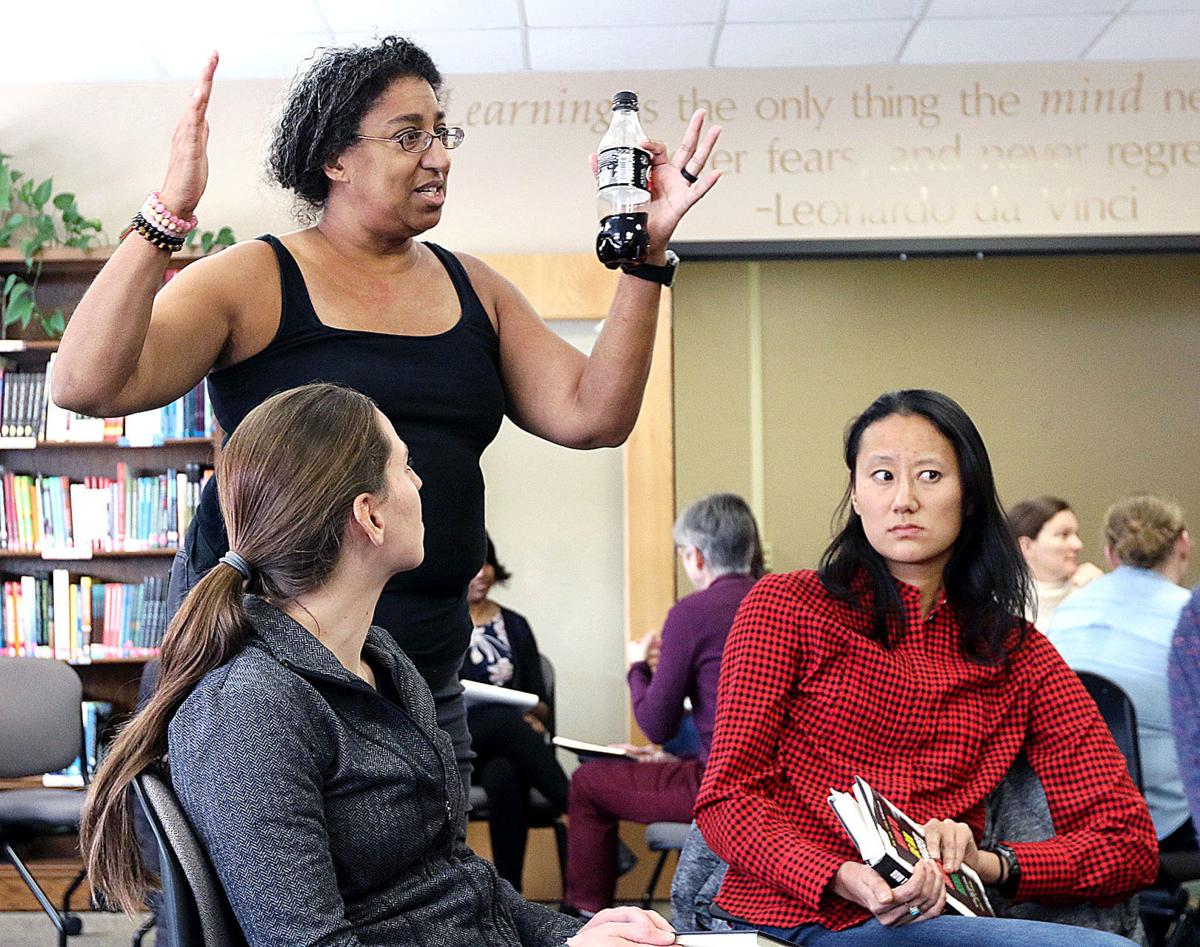 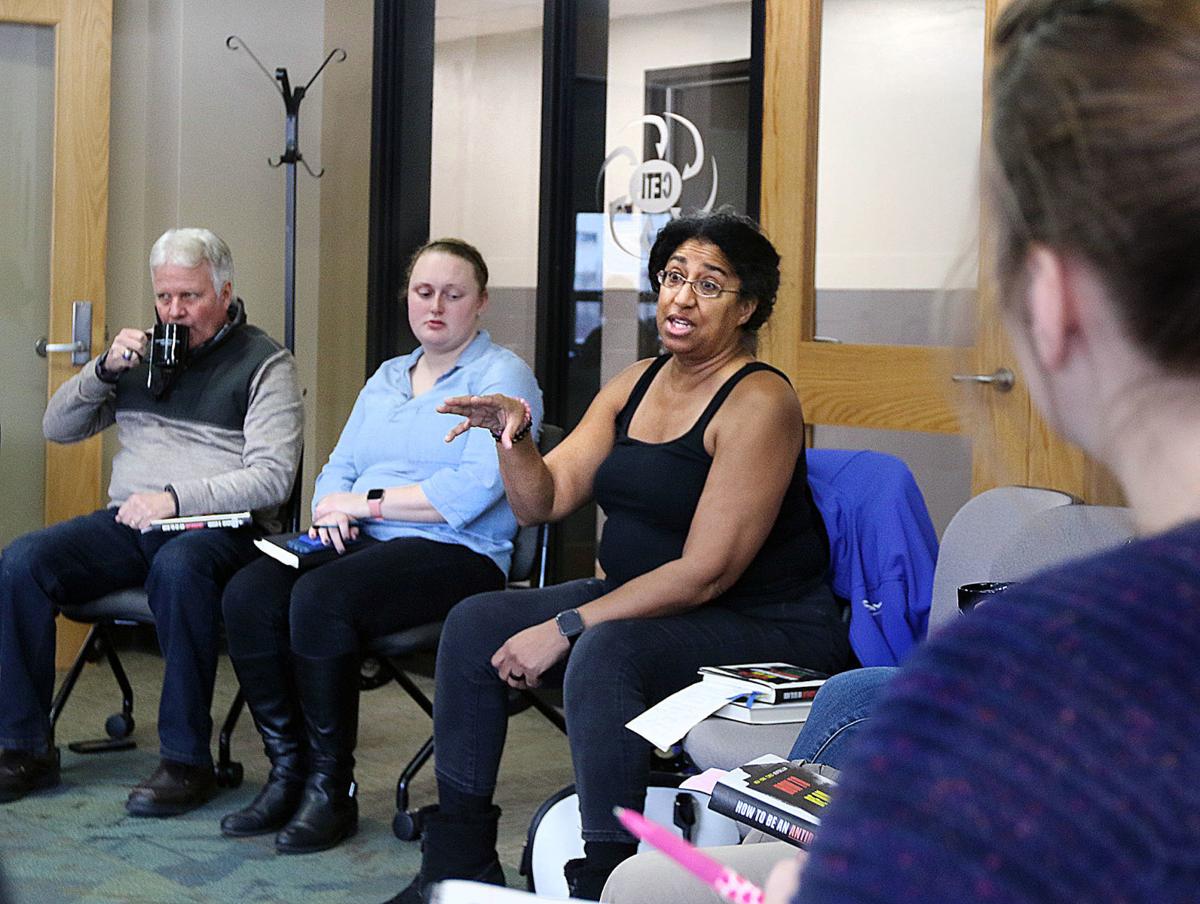 UW-Eau Claire history professor Selika Ducksworth Lawton, center, facilitates a group discussion on "How To Be An Antiracist" by Ibram X. Kendi Wednesday afternoon. Attendees spoke about pressures felt by students of color and connections between race and class, among other topics. View more photos at LeaderTelegramPhotos.com.

UW-Eau Claire history professor Selika Ducksworth Lawton, center, facilitates a group discussion on "How To Be An Antiracist" by Ibram X. Kendi Wednesday afternoon. Attendees spoke about pressures felt by students of color and connections between race and class, among other topics. View more photos at LeaderTelegramPhotos.com.

“I know, I just asked you to save the world,” Ducksworth Lawton said with a laugh. “You have one week.”

Her comment came near the conclusion of an hour that UW-Eau Claire faculty and staff spent conversing about several chapters of “How To Be An Antiracist” by Ibram X. Kendi. Seventeen people gathered Wednesday afternoon in the Center for Excellence in Teaching and Learning to discuss how behavior can be incorrectly racialized and the connection between race and class, among other topics.

Ducksworth Lawton, a history professor at the university, noted the difficulty presented when working on topics involving racial equity. A few hours of book discussion will not save the world, as she noted, but it is part of the beginning of what could be a wider, more consistent conversation regarding racial inclusivity in the Chippewa Valley.

The discussions this month are limited to university faculty and staff, but Uniting Bridges of Eau Claire, where Ducksworth Lawton is vice president, aims to help facilitate monthly discussions in the community this year. The organization will host reading groups that focus on a book about a particular marginalized group, including African Americans, Hmong people and transgender people.

Wednesday marked the second of three hour-long meetings this month regarding Kendi’s book, which defines facets of racism and spells out how to actively work against them as individuals and at the policy level.

The book group is one of two focusing on racial inclusivity this month, both facilitated by Ducksworth Lawton. Another group meets Friday afternoons to go over “Two-Faced Racism” by Leslie Houts Picca and Joe R. Feagin, which focuses on the differences between how white people discuss racial matters in public and private settings.

Ducksworth Lawton started Wednesday with a few comments before participants split into four small groups for about 30 minutes. They focused on the question of how innocent behavior, such as teenagers hanging out and riding bikes, can become racialized locally.

One group mentioned that being a student of color at a predominantly white institution like UW-Eau Claire can lead to pressure, since people are more likely to racialize their classroom behavior. That can be particularly stressful when a course has one or two people of color. In a majority-white classroom, white students are not expected to represent all white people, only themselves. However, students of color might be asked to speak for their entire race.

They also discussed the differences between being fine with one individual of color but feeling uncomfortable around multiple people of color. Ducksworth Lawton gave the example of when she spends time in public with coworkers of color.

“Wherever we go, there are people who stare at us and seem frightened that there is a group of middle-class black people,” Ducksworth Lawton said.

Another small group focused on thinking of themselves as an active part of problems and solutions at the local level. It is common to look at area issues from a bird’s eye view instead of being personally invested, something they hope to change about themselves.

One small group talked about the interconnectedness of race and class.

“A lot of our issues come down to being more about class than they actually are about race, but they aren’t separate from each other,” one participant said.

Ducksworth Lawton agreed and said campus members need to interrogate how race is used as a marker for class at the university.

Next week, the book group will further discuss connections between race and class and how some people use race to cover for class and other worries.

“In this country, race is an all-purpose scapegoat for many types of anxieties that people can’t even see,” Ducksworth Lawton said.