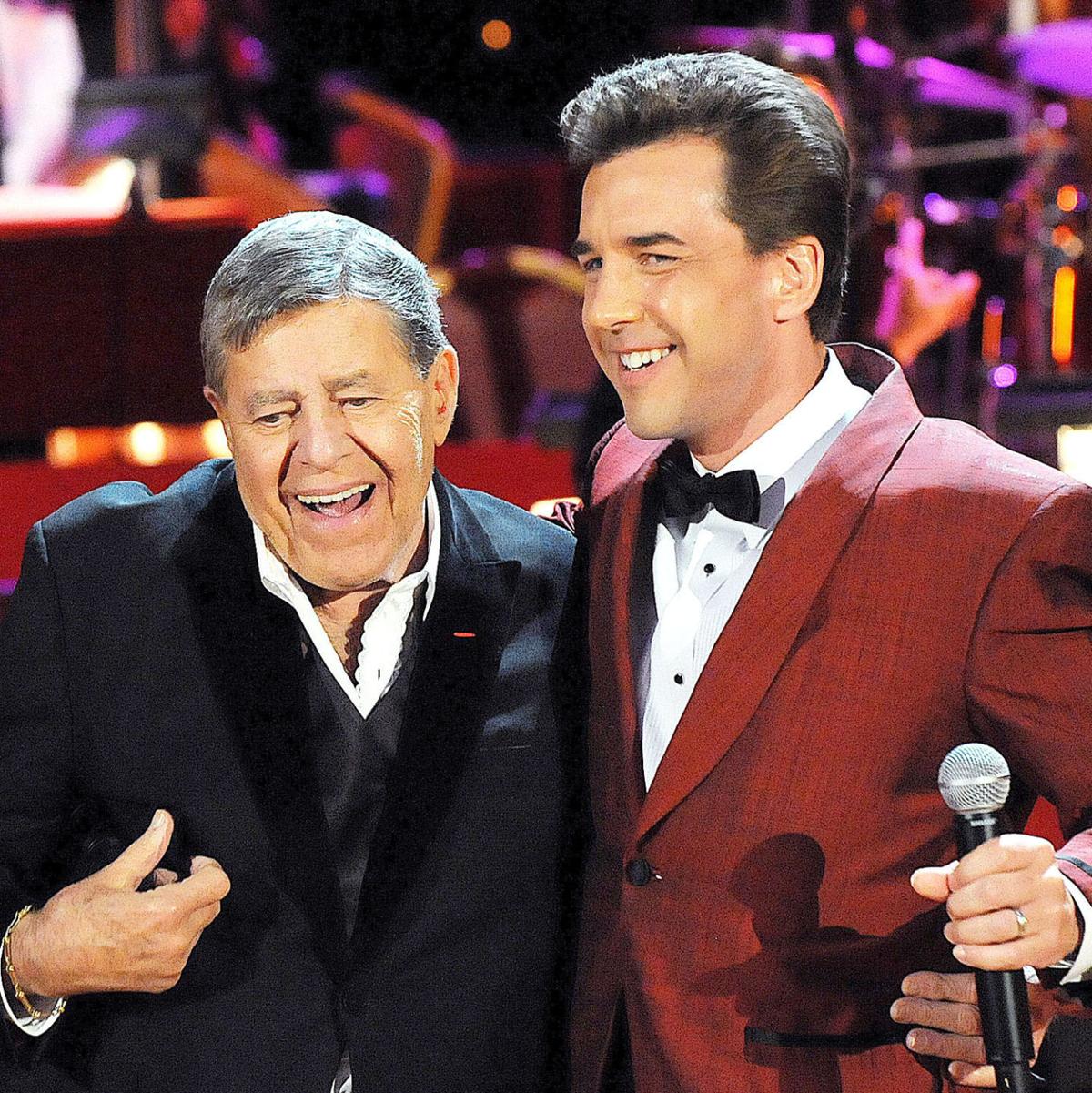 Michael Andrew, a singer, actor and 1987 UW-Eau Claire graduate, became close to legendary actor Jerry Lewis when he starred in a musical theater version of Lewis' "The Nutty Professor." 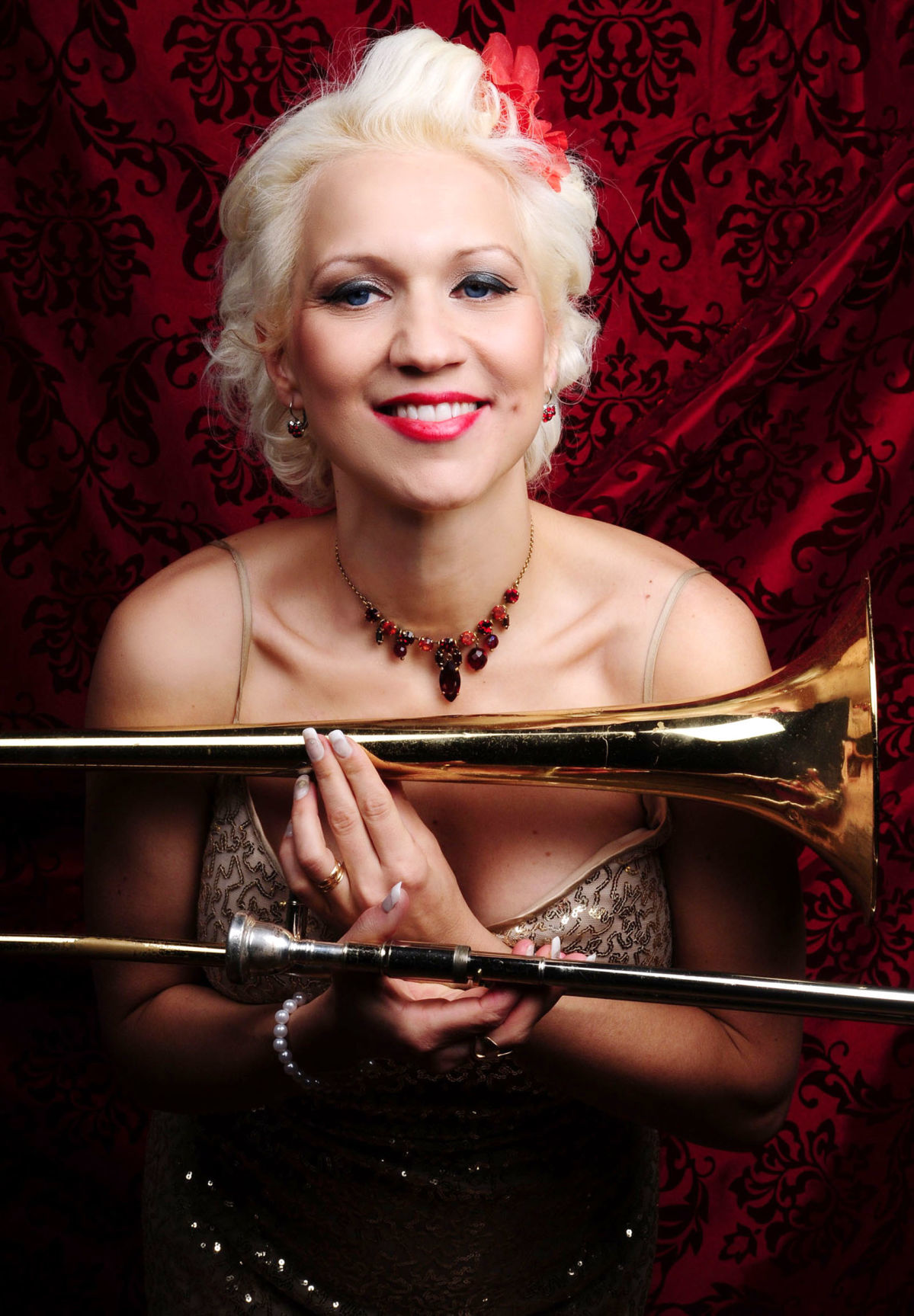 Gunhild Carling, a singer and multi-instrumentalist who is a member of Postmodern Jukebox, will perform as a guest artist along with Michael Andrew at the holiday concert by UW-Eau Claire Jazz Ensembles I and II Friday in Pablo Center at the Confluence's RCU Theatre.

Michael Andrew, a singer, actor and 1987 UW-Eau Claire graduate, became close to legendary actor Jerry Lewis when he starred in a musical theater version of Lewis' "The Nutty Professor."

Gunhild Carling, a singer and multi-instrumentalist who is a member of Postmodern Jukebox, will perform as a guest artist along with Michael Andrew at the holiday concert by UW-Eau Claire Jazz Ensembles I and II Friday in Pablo Center at the Confluence's RCU Theatre.

The genre features songs written and/or performed by Frank Sinatra, Cole Porter, Johnny Mercer, Duke Ellington, George and Ira Gershwin, among others. As Andrew explained in a phone interview, “That is really America’s music. It’s just kind of timeless; it’s never going to go out of style because that’s our country’s music.”

What: “Swing Into Christmas,” a concert featuring Michael Andrew and Gunhild Carling backed by the UW-Eau Claire Jazz Ensembles I and II, directed by Robert Baca.

Where: RCU Theatre, Pablo Center at the Confluence, 128 Graham Ave.

A 1987 UW-Eau Claire graduate, Andrew’s credits include a two-year stint as headline singer and bandleader at the world famous Rainbow Room atop Rockefeller Center in New York City, and a compliment from TV show host/media mogul Merv Griffin as “one of the great singers of all time.”

Andrew will appear as guest vocalist during a Christmas concert presented by UW-Eau Claire’s Grammy Award-winning Jazz Ensembles I and II Friday in Pablo Center at the Confluence’s RCU Theatre.

Also featured at the show will be internationally celebrated Swedish singer-instrumentalist Gunhild Carling, who performed last month at a sold-out RCU Theatre as a member of Postmodern Jukebox.

According to Robert Baca, UW-Eau Claire director of jazz studies, Carling is becoming a jazz superstar “because she crosses all the lines and appeals to every type of udience. “How can you not love a person who plays three trumpets at once,” Baca said via email.

On one of the songs during the concert, Baca said, Carling will play 10 instruments. “And she plays them ALL well!”

The concert will feature sacred and secular Christmastime favorites in a manner that will evoke fond memories of years past.

“I think people can expect, obviously with me, a nostalgic feel,” Andrew said. “My style, especially when it comes to the holidays, is kind of a throwback that’s very much reminiscent of the Andy Williams Christmas specials, and I think they’re timeless.”

Alluding to Andrew’s talents, Baca described the concert as “the closest version of hearing your Christmas radio favorites from the 1930s and ’40s, only live.”

Andrew, who also is a composer and bandleader, has performed as a vocalist with symphony orchestras across the nation and has had roles in theatrical musicals and comedies as well as films. He starred in the world premiere of the stage musical, “The Nutty Professor,” written by Marvin Hamlisch and Rupert Holmes and directed by Jerry Lewis. Andrew earned rave reviews for his performance in the title role and became close to the acting legend.

In fact, it was the original film version of “The Nutty Professor” (1963) that put Andrew on his career path. Growing up with a love of magic, his interest changed quickly at about age 10 when he saw the movie on television.

“There were two things about it that just completely freaked me out,” he said. “One was that Jerry Lewis could be two different people, and I thought of that as a magic trick. I thought it was the best magic trick there was, and what it was was acting.”

While Lewis had on a bit of makeup, Andrew recalled, “Really it was just the way he held himself, the way he talked because he went from being this nerdy chemistry professor that was clumsy and nerdy and shy to being this loud, suave, completely self-confident singer, Buddy Love. And I really got obsessed with that movie.”

Besides the acting and comedy, a third element captivated Andrew: the big-band-style music Buddy performed.

“So then I started listening to all the stuff my dad listened to, Sinatra and Dean Martin and Sammy Davis Jr., and really getting into it, and I started mimicking it,” Andrew said.

From that point on, “the magic kind of went into the closet,” he said, and he focused on acting and singing in the style that captivated him so much.

Despite that interest, when Andrew enrolled at UW-Eau Claire, he figured he would major and business and follow in the footsteps of his father, who was a real estate developer.

“Of course I had this passion for the acting and singing of Jerry Lewis,” he recalled. “But honestly I thought of it as a pipe dream. I didn’t really think that was what I was going to do with my life.”

So he proceeded with the basic business classes, but he had a change of heart when he went to a theater department picnic.

“And it was the first time in my life I met all these people and I thought, ‘Wow!’ This is like my family,’” he said. “I just felt this kinship like I’ve never felt with friends before.”

It wasn’t long before Andrew started auditioning and getting roles, and ultimately earning a theater degree.

Andrew returned to his alma mater last month for Gatsby’s Gala, presented by Eau Claire Jazz Inc. as a fundraiser for UW-Eau Claire’s jazz studies area. The event is a 1920s-themed party that includes Jazz I and II as well as guest artists.

Andrew said he enjoyed the event, wishing it had been around when he attended the school.

“We had the Viennese Ball, but we didn’t have anything like the Gatsby,” he said. “I would have loved that as a student, so it was great to be a part of that.”

Quentin Volk, Eau Claire Jazz Inc. executive director, described the Gatsby’s Gala scene. “The second you walk into Davies Center — everything from the props to the lighting to the sound to the dancers to the music obviously to the drinks — you are quite literally transformed back to the 1920s Gatsby type of era,” Volk said.

Andrew also was impressed by the UW-Eau Claire jazz musicians he played with.

“I felt like the attitude of the students was really incredible. So open and positive, there isn’t an ounce of cynicism,” he said, adding with a knowing chuckle, “there is a lot of that (cynicism) just in the country in general these days.”

Andrew’s performance was a hit with the crowd.

“I play a lot of gigs like that but there is no one that has sounded closer to Frank Sinatra in my opinion than Michael,” said Volk, who also is a UW-Eau Claire jazz studies graduate and professional trumpet player. “He was a total performer.”

While rehearsing for the Gatsby event with the UW-Eau Claire jazz ensembles in Gantner Concert Hall, Andrew was reminded of his student days.

“And so I walked in there, and it just all came flooding back to me, remembering the shows I did in that theater,” he said. “That was really the time when I realized this is really who I am, this is what I’m going to do. So it all came back; it was like no time elapsed. Because I looked up and there are these little round reflectors, sound reflectors, and I’ve been in a lot of performing arts centers, and I don’t think I’ve seen any quite like that, and they’re still up there. And everything looked the same to me. It was amazing.”

Andrew helped get Carling to return to Eau Claire, as the two of them have another performance scheduled next week with the Desert Symphony, based in Palm Desert, Calif.

“I’m just thrilled that she’s able to join me for this,” he said. “It’s a great way for us to kind of tour together instead of just a one-off.”

In addition, Andrew sounded confident that Jazz I and II will handle their duties admirably.

“They’re so good,” he said. “I’ve worked with some of the best jazz musicians in the country. ... And these guys, they’re excellent. The musicians are excellent, and (Baca) knows just what to say to just get them on the professional level.”

With the musicianship and the holiday spirit, Andrew sees the concert as a draw for all ages.