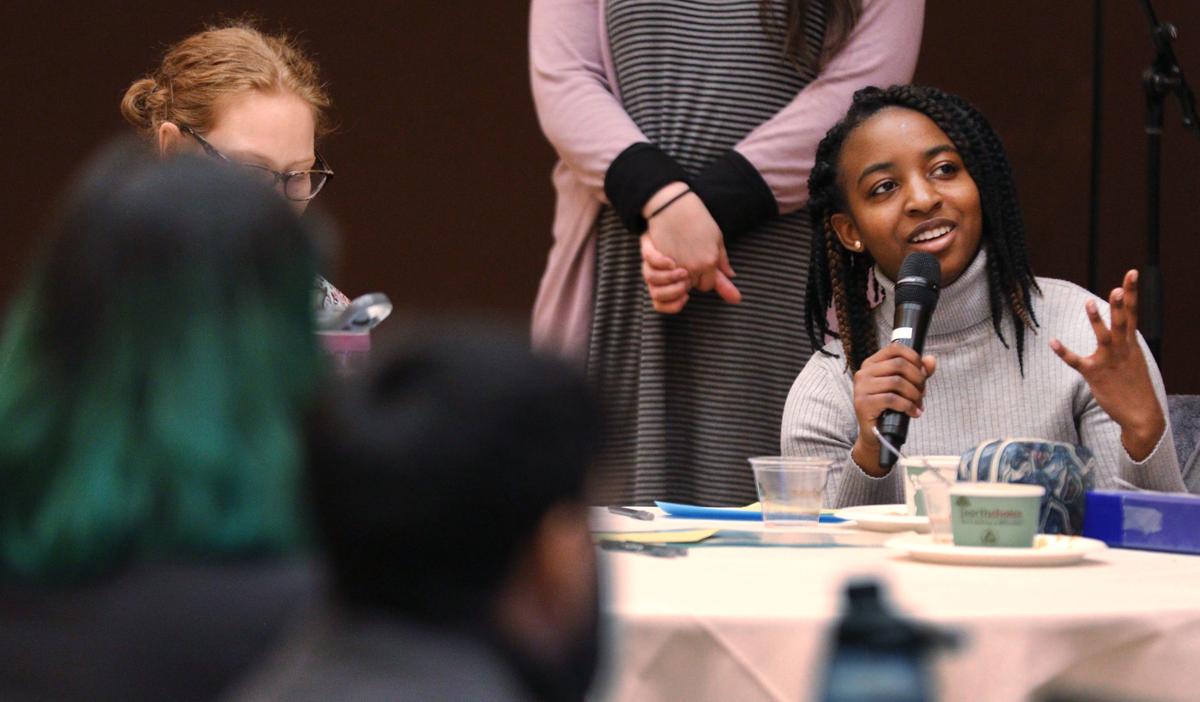 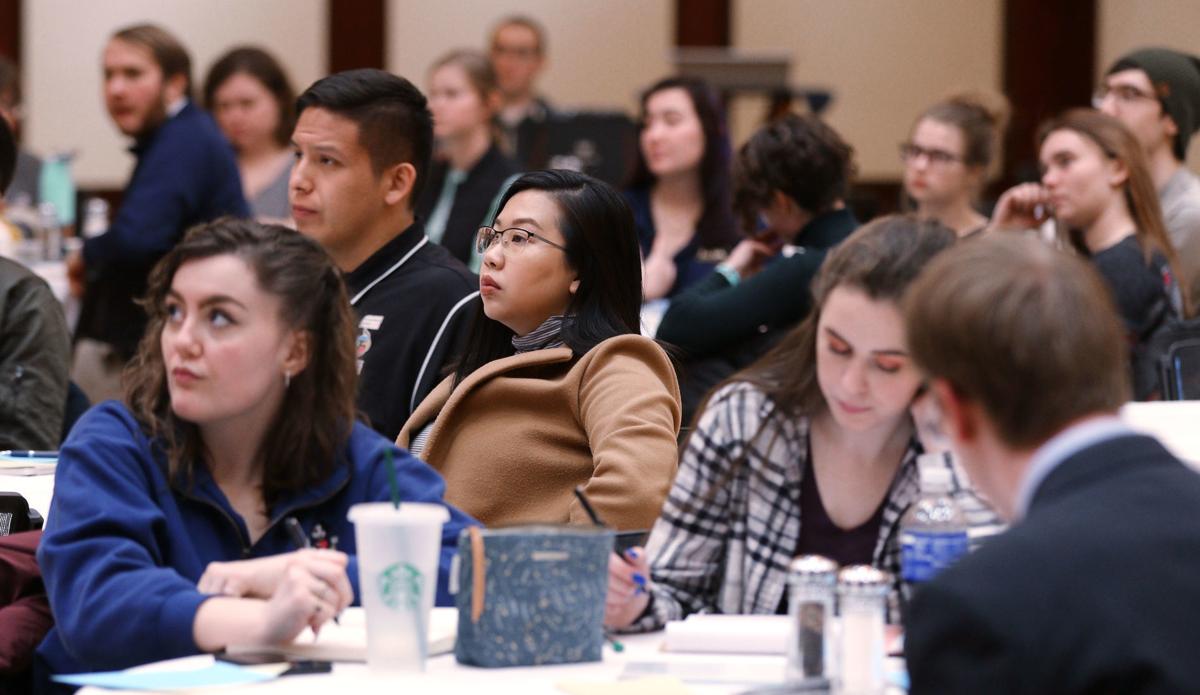 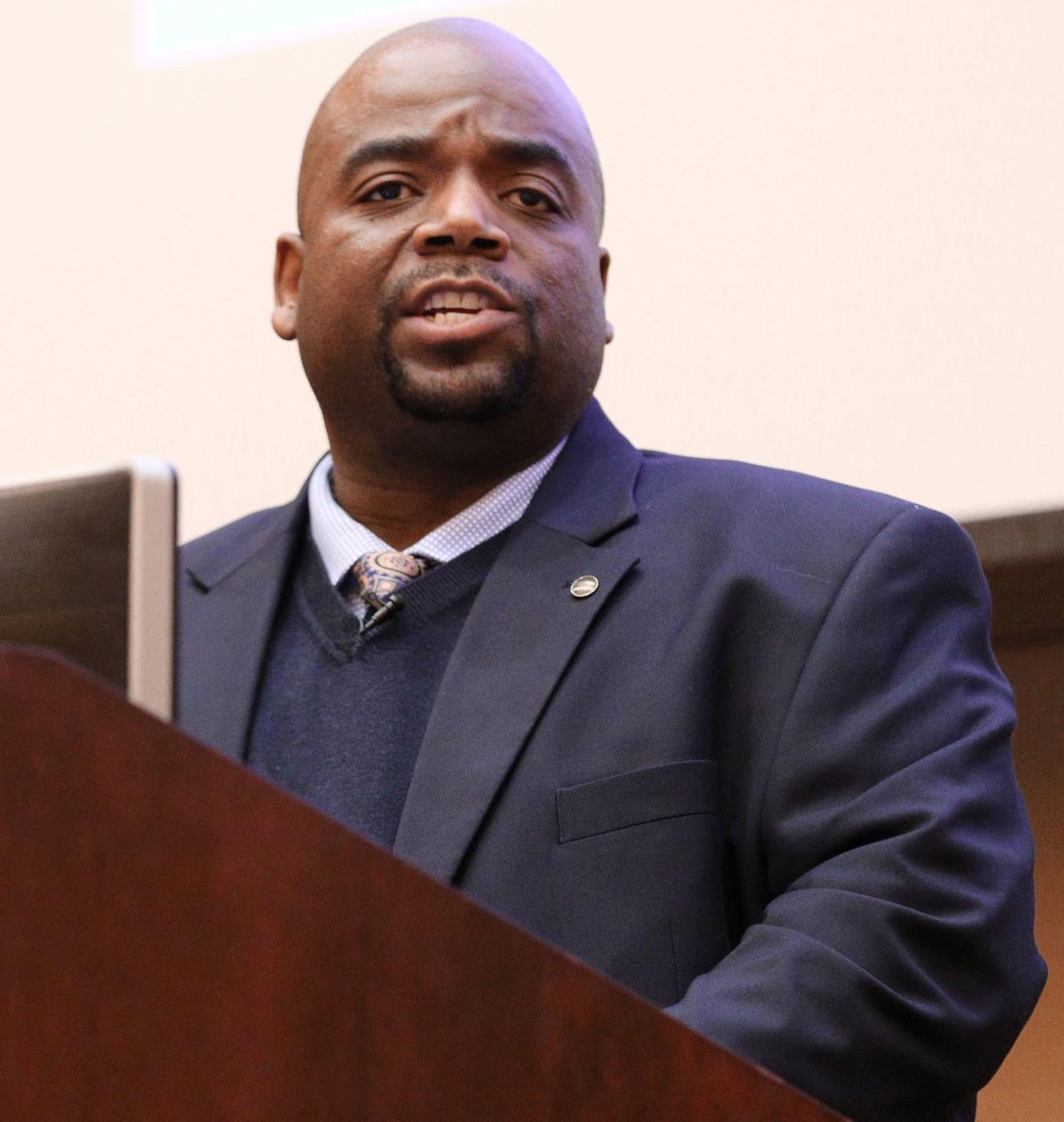 UW-Eau Claire students, faculty and staff provided insight on how the university can improve equity, diversity and inclusion during two forums Monday afternoon.

About 60 people attended the first forum, including around 40 students. About 150 people came to the second forum, most of whom were faculty and staff.

The task force co-chairs briefly discussed the nine recommendations before attendees asked questions and gave suggestions. Co-chair Jan Larson, professor and chair of communication and journalism, knows the recommendations won’t end racism, but she said they can help the university better articulate its values and offer support to people targeted by bias and hate.

Audience members offered answers to the question of which recommendations they prioritize. Multiple people mentioned the importance of the first recommendation, which would create a Restorative Justice Program, because of the opportunity for individual attention in a learning environment.

A student said the sixth recommendation, which involves updating the EDI website to make navigation easier, is important because it will help show people outside Eau Claire that the university is actively working to improve EDI. Another student prioritized the eighth recommendation, which would review and update codes of conduct and handbooks, because it leads to other actions.

The next question asked where individuals can have the biggest impact within the recommendations. One student plans to increase communication and resources through student government. She also said a tip sheet or guide could help lead to more productive conversations around racial and social topics, since many people want to help but don’t know exactly where to start or which questions to ask. Another attendee mentioned creating common language for all EDI training.

Attendees answered those two questions on index cards during the forums. On separate index cards, they wrote down questions that university leaders will answer in a Google Doc in the near future.

Chancellor James Schmidt said problems like racism must be acknowledged to attempt to resolve them. He said it was clear the task force needed to work on concrete steps and pledged to begin implementing new actions soon.

Schmidt said members of underrepresented groups experience racism on campus hundreds of times per day and mentioned the pain and difficulty during conversations about racist incidents.

Kayde Langer knows that pain firsthand. Langer, a Red Lake Ojibwe student, was the target of a racist incident in September, when a message that included a racial slur and “go back to the rez” was written on Langer’s dorm room door.

At the first forum, Langer said the second and eighth recommendations are most important. The second one involves improving reporting systems around bias and hate incidents, and the eighth relates to updating codes of conduct.

Langer said it is troubling for students to be encouraged to report incidents but feel like their concerns are dismissed.

“They keep putting these barriers between students and what we need,” Langer said.

During an interview with the Leader-Telegram Monday morning, Langer called the recommendations more of a public relations move than an effort at tangible improvement.

“This university wants to give (itself) brownie points for making this task force, when they wouldn’t have to if they actually held their students accountable,” Langer said.

Langer, a junior studying sociology, is set to graduate next May but does not believe campus will meaningfully improve by then.

“I’m kind of under the impression that I’m just going to struggle through it for the next three semesters,” Langer said. “The more you understand how this university works, the more it just makes it harder to come back.”

Langer looked forward to this academic year, but that outlook took a turn for the worse less than a month into the fall semester. The investigation into the incident involving Langer remains open, but the person who wrote the message has not been found, leaving Langer with an unsettling feeling.

“I walk around campus not knowing who it actually is,” Langer said. “You wonder how many people think that same way.”

“We’re under this impression that none of it is our fault, that it’s society’s problem, but we refuse to acknowledge our place within the society that’s perpetuating this behavior,” Langer said.

Vice Chancellor for EDI and Student Affairs Warren Anderson aims to oversee improvement in those areas, among others. He will guide a team this semester to develop the nine RATF recommendations in addition to developing a comprehensive EDI strategic plan.

Anderson expects the investigation into the culture of the university’s athletic department to produce a report that considers athletics in the context of the institution as a whole. That investigation was announced last week and will be handled by consulting firm Stan Johnson & Associates. Anderson said the university hopes to have a report from the firm by the end of spring semester.

“Whatever happens in athletics is a microcosm of what’s happening here at the university,” Anderson said.

Anderson, who began his new role about two months ago, discussed the importance of building a culture of trust between students and administrators. That level of trust also involves discussing positive EDI events along with working to improve the negative aspects.

Anderson said he “can’t underscore enough how serious some of these incidents were,” but they provided the opportunity for UW-Eau Claire to reconsider its existing processes and think about the type of campus environment it wants to build. He said most, if not all, colleges in the country are facing similar challenges.

“This is happening everywhere; we are not alone,” Anderson said. “We’re building an environment because people are tired of seeing and hearing about these things.”