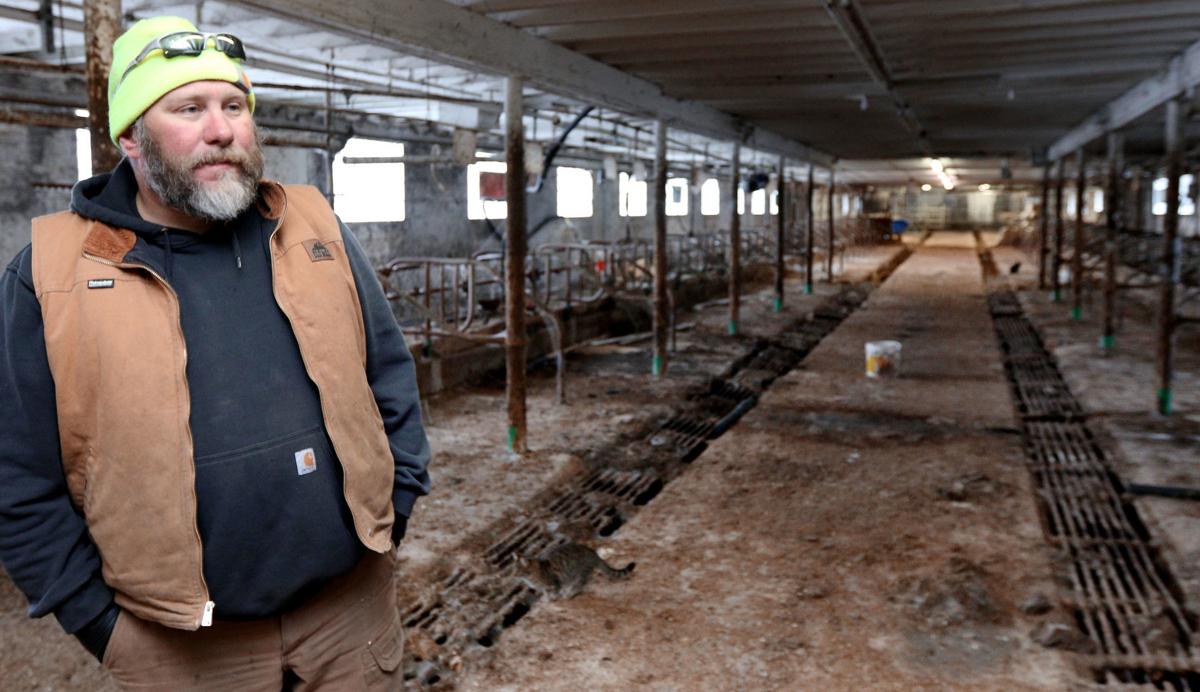 Sixth-generation farmer Eric Mikelson of Buffalo County walked Nov. 30 through the now-empty barn his grandfather built in 1953. Mikelson, who filed for Chapter 12 bankruptcy on the rural Nelson farm last December, is part of a rising tide of farm bankruptcies in the region. 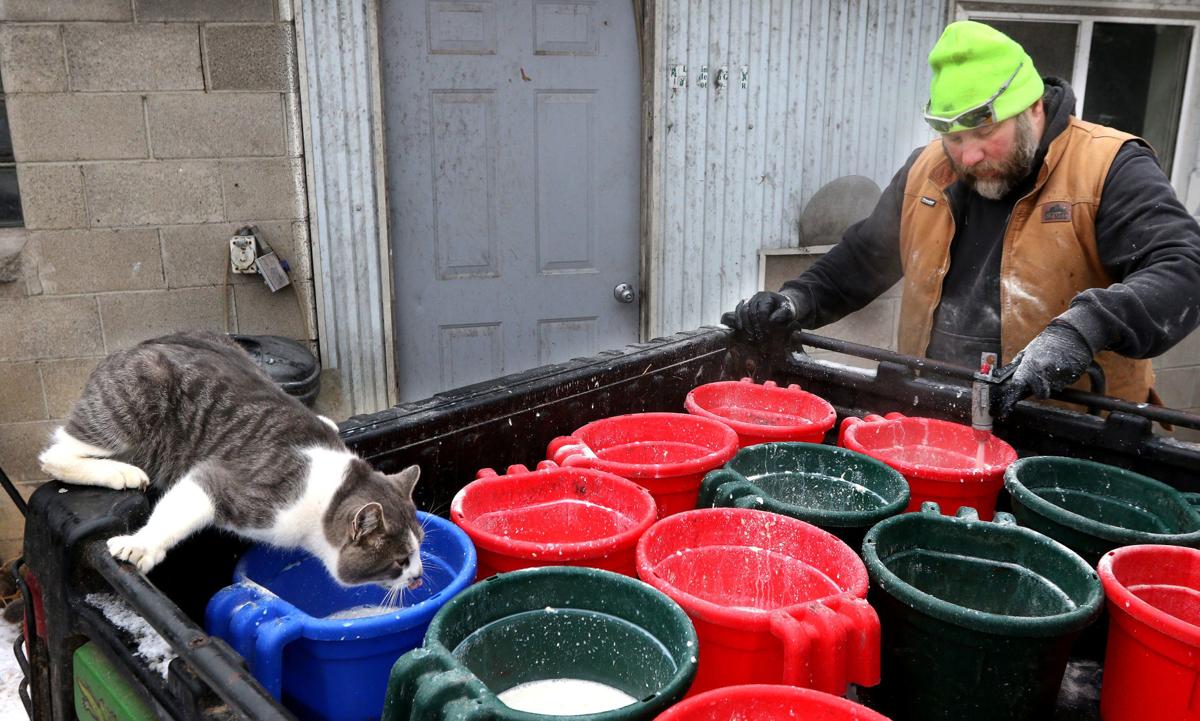 Buffalo County farmer Eric Mikelson prepared to feed his calves Nov. 30 while his cat Fred snuck a drink. He says only two “ma and pa farms” are left in the area, which used to be home to dozens. 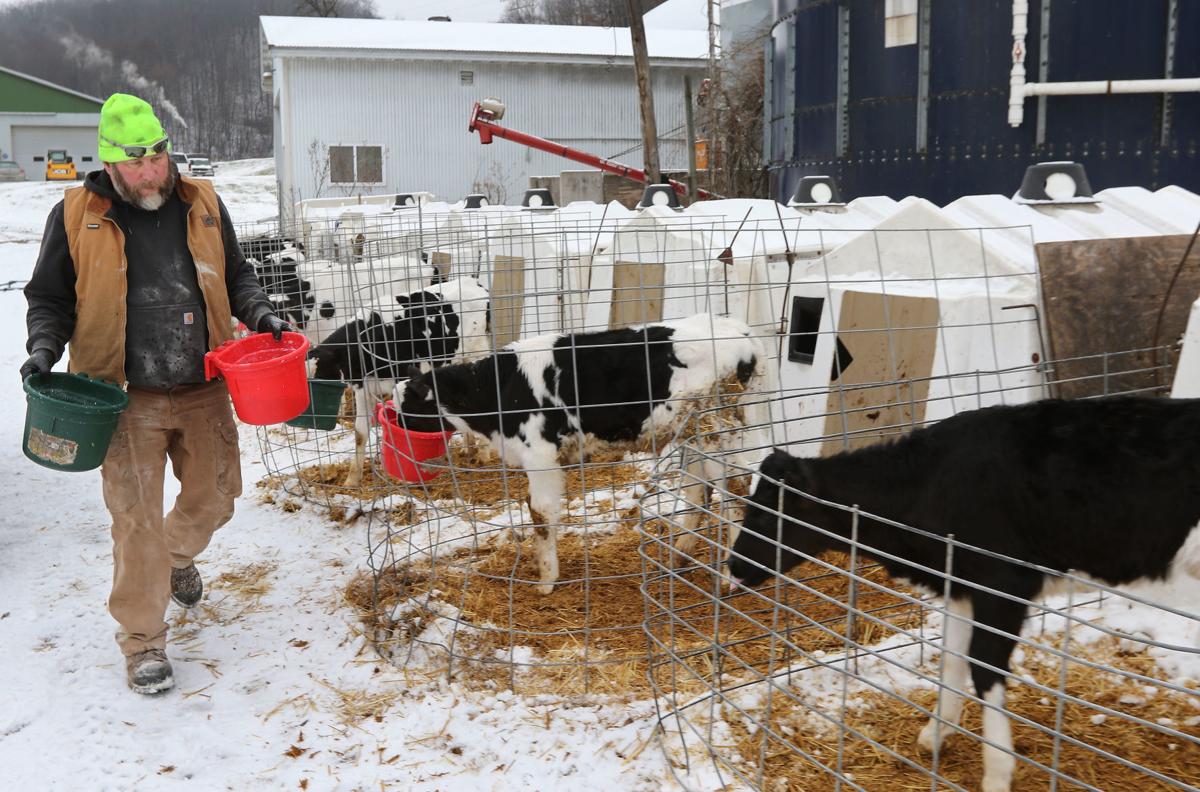 Mikelson fed his calves Nov. 30. He started raising beef cattle three years ago after selling off his dairy cows.

Sixth-generation farmer Eric Mikelson of Buffalo County walked Nov. 30 through the now-empty barn his grandfather built in 1953. Mikelson, who filed for Chapter 12 bankruptcy on the rural Nelson farm last December, is part of a rising tide of farm bankruptcies in the region.

Buffalo County farmer Eric Mikelson prepared to feed his calves Nov. 30 while his cat Fred snuck a drink. He says only two “ma and pa farms” are left in the area, which used to be home to dozens.

Mikelson fed his calves Nov. 30. He started raising beef cattle three years ago after selling off his dairy cows.

Eric Mikelson’s family has been farming the same patch of land in Buffalo County for six generations, and he would like to keep the tradition going.

But persistently depressed livestock prices make it look increasingly likely he will be the end of the line.

While Mikelson, 42, enjoys the farming way of life, economic conditions forced him to sell his cows three years ago and transition to raising beef cattle. When the numbers still didn’t add up, he filed Chapter 12 bankruptcy last December.

“It’s a very tough time for farmers,” said Mikelson, who still has about 70 steers after selling half of his herd to make ends meet. “Farms my size, we’re done.”

The financial strain afflicting farms was evident in a report released last week by the Federal Reserve Bank of Minneapolis showing that Chapter 12 farm bankruptcies are on the rise in the Midwest, especially in America’s Dairyland.

The report indicated that 84 farm operations in Wisconsin, Minnesota, Montana, North Dakota and South Dakota had filed for Chapter 12 in the year ending June 30, more than twice the number from four years earlier when the bankruptcy rate started a steady climb. About 60 percent of those bankruptcies were filed in Wisconsin.

Bankruptcy filings were particularly high among dairy farms in Wisconsin, where the number of licensed dairy herds totaled 8,217 in November, down 1,143, or 12 percent, from two years earlier and just over half the level in 2003, according to the state Department of Agriculture, Trade and Consumer Protection.

“Though the state is the country’s No. 2 milk producer, it still has many small farms, which tend to be more exposed to large price fluctuations,” Ronald Wirtz, director of regional outreach for the Federal Reserve’s 9th District, based in Minneapolis, wrote in the report.

The report highlighted a key difference between Wisconsin and the nation’s top dairy-producing state: The average dairy herd in Wisconsin is 153 cows, compared with 1,300 in California.

Thirty farms filed Chapter 12 in the year ending Sept. 30 in just the Western District of Wisconsin. Nebraska, with 31 cases, was the only federal court district in the country with more farm bankruptcies in that period, according to U.S. court records. The total for all four districts in California was 17 cases.

Eau Claire attorney Josh Christianson, who filed seven of those bankruptcy cases on behalf of regional farmers, said many farmers are getting hit by the double whammy of low commodity prices and high land prices, which keeps their income low and their taxes high.

“Most of them have been involved in farming their entire lives and have been successful, so this is very tough to deal with,” said Christianson, a partner at the Christianson & Freund law office.

Westby dairy farmer Darin Von Ruden, president of the Chippewa Falls-based Wisconsin Farmers Union, said the high bankruptcy rate in western Wisconsin likely has a lot to do with the relatively large number of family farms.

Eau Claire County UW-Extension agriculture agent Mark Hagedorn agreed, saying, “With a smaller number of acres and a smaller number of livestock, it gives you statistically a lot less margin for error, and the opportunities for forward contracting and marketing just aren’t quite the same.”

In addition to his own challenges, Mikelson can see the impact right on Highway KK, the rural road where his family has been farming among the wooded bluffs northeast of Nelson for more than 125 years. Only two of what he called “ma and pa farms” are left in the area, which used to be home to dozens.

“It’s just turning to the big guys. Prices will come back sooner or later, but it will be after all of us little guys are gone,” Mikelson said, predicting giant farms and concentrated animal feeding operations, or CAFOs, likely will handle almost all Wisconsin agricultural production within a few years.

Before it’s too late, Van Ruden said, policymakers and consumers should consider whether the nation should put its food supply into the hands of fewer and fewer people.

In the meantime, Mikelson, who left his family’s farm for about five years after high school before returning 18 years ago, is debating what to do with his future and feeling like his bank is pressuring him to sell.

He already works full time on the side as a logger and leases his tillable land to a neighbor because he receives more in rent than he would earn by growing crops on it.

Still, it pains him to think about selling the 170 acres his great-uncle gifted to his grandfather in the 1960s, the place he grew up and learned about dairying from his dad.

“I would be out of debt — yay, great — but I don’t want to sell,” Mikelson said, noting that he has about $1 million in debt on property and equipment valued at $1.8 million.

The No. 1 factor contributing to the dire state of many west-central Wisconsin farmers is the low price they are receiving for their products, said Dave Adler, an accountant at Adler CPAs & Advisors in Bloomer who has a number of agricultural clients.

The price farmers receive for milk is about what it was in the early 1990s, Adler said.

“Their feed costs and other inputs are at 2018 prices, but they’re stuck with early ‘90s-level revenue,” he said.

It leads to a difficult financial balancing act for farmers.

“Farmers are caught in a Catch-22 because when prices are good, they’ve tended to expand, but when prices drop, they have to produce more to meet expenses, and that just exacerbates the price issues,” Adler said.

Commodity prices have long been cyclical, but industry observers have been surprised by the duration of the latest trough.

“Nobody is making any money right now,” Hagedorn said, calling attention to the negative spinoff effect on communities in agricultural areas.

“If they’re lucky, farmers may be paying the mortgage and keeping food on the table, but I promise you they aren’t buying new tractors or equipment,” Hagedorn said.

With futures markets not showing any recovery in the next 18 months, Von Ruden said, he has no reason to expect prices to recover anytime soon.

“Farm finances were always up and down, but we’ve never been in a slump for this long of a stretch,” Mikelson said. “We’ve survived through it all, but now commodity prices are just crushing and it’s making it so we can’t survive.”

Perhaps the most frustrating thing of all, he said, is that the prices consumers pay are so much higher than what farmers get for their raw product.

The gap hit home for Mikelson during a recent trip to an Eau Claire grocery store when he recalled seeing 80 percent lean hamburger selling for $5.69 a pound, more than seven times the 77 cents a pound he receives for his steers. Considering a typical 1,500-pound steer produces about 350 pounds of burger, that’s more than $1,700 of revenue per animal going to someone other than the farmer.

His Chapter 12 filing gives him up to five years to reorganize his debt to stay in business, but he’s not optimistic.

“With these prices,” Mikelson said, “I’m not going to make it.”