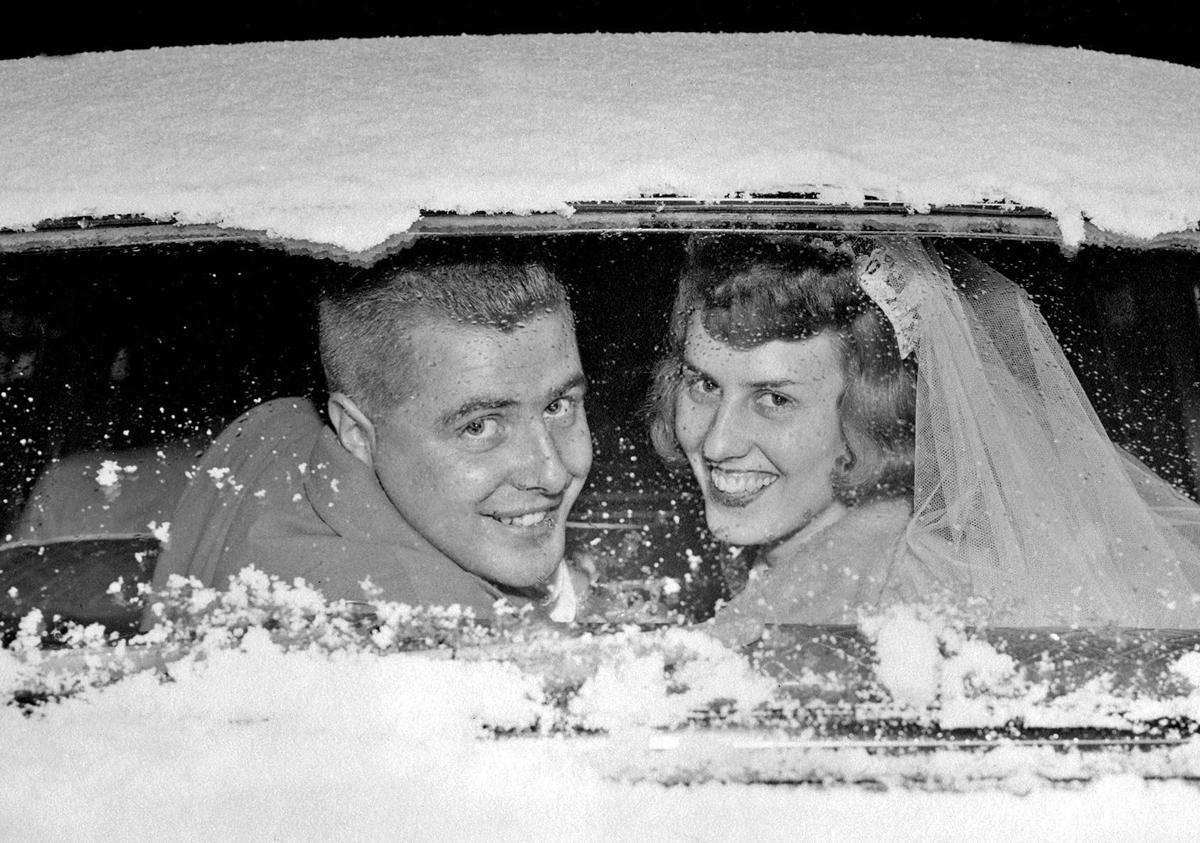 When Dick and Rosemary Mitchell left the former Concordia Evangelical Lutheran Church after their Dec. 3, 1955, wedding, they were surprised to see their 1955 Oldsmobile 88 covered with snow. 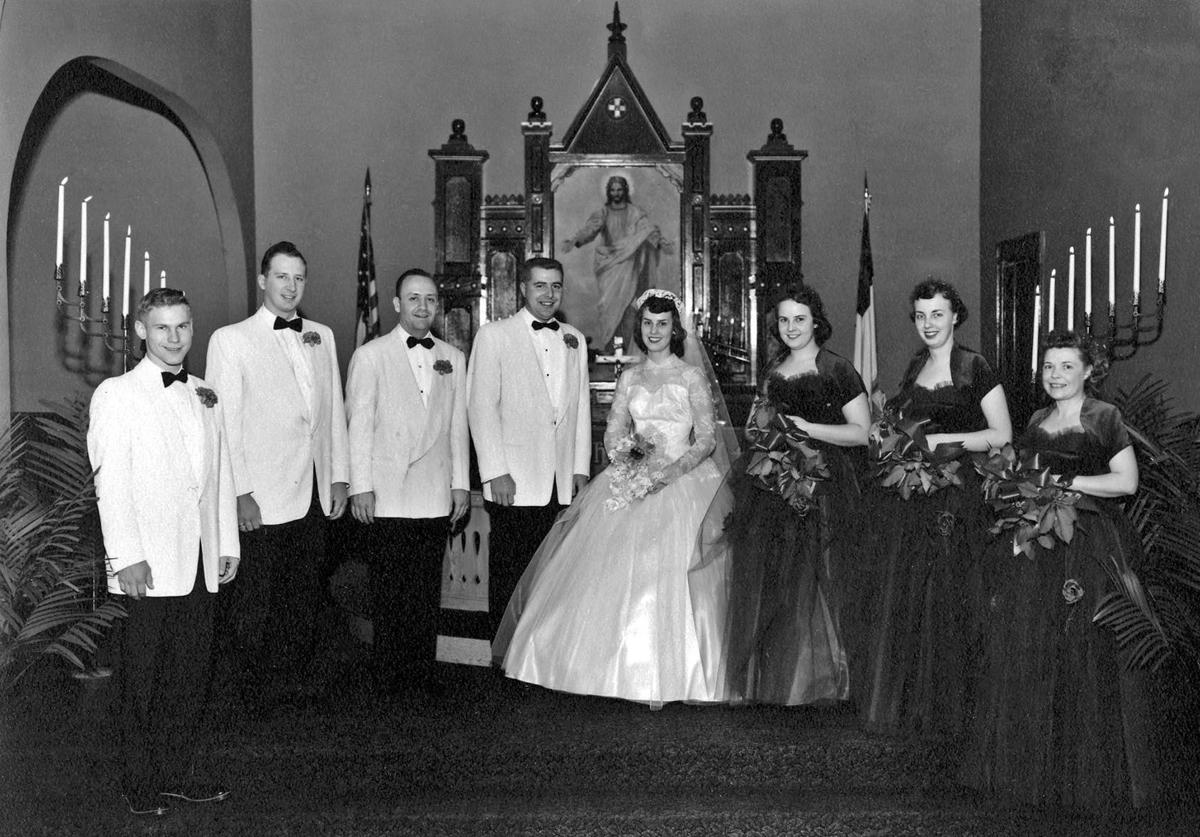 Dick and Rosemary Mitchell and their attendants pose for photos on the day of their 1955 wedding in the former Concordia Evangelical Lutheran Church in downtown Eau Claire. 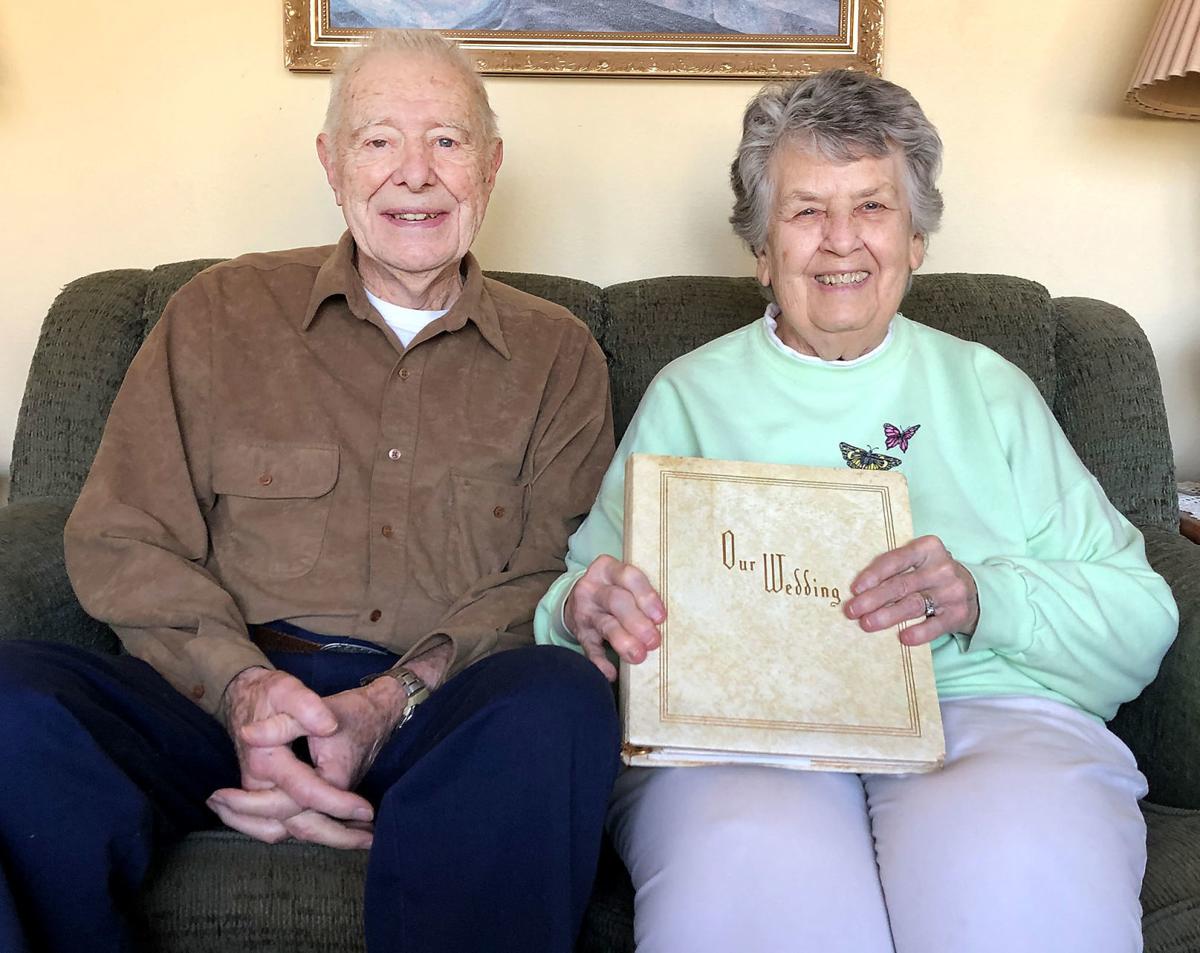 Dick and Rosemary Mitchell of Eau Claire talk Friday about their wedding 64 years ago at the former Concordia Evangelical Lutheran Church. The building that once housed the church was razed Friday.

When Dick and Rosemary Mitchell left the former Concordia Evangelical Lutheran Church after their Dec. 3, 1955, wedding, they were surprised to see their 1955 Oldsmobile 88 covered with snow.

Dick and Rosemary Mitchell and their attendants pose for photos on the day of their 1955 wedding in the former Concordia Evangelical Lutheran Church in downtown Eau Claire.

Dick and Rosemary Mitchell of Eau Claire talk Friday about their wedding 64 years ago at the former Concordia Evangelical Lutheran Church. The building that once housed the church was razed Friday.

The 90-year-old building at the southeast corner of Madison and Farwell streets may have disappeared Friday, but the demolition can’t erase the memories of at least one couple’s big day inside the former structure.

Dick and Rosemary Mitchell of Eau Claire said “I do” in what was then Concordia Evangelical Lutheran Church on Dec. 3, 1955.

Their wedding day was the only time the couple set foot in the downtown Eau Claire church.

Not once before that because neither of them attended services in the house of worship — the pastor of Rosemary’s church agreed to conduct the ceremony there but not at her church because Dick wasn’t a Missouri Synod Lutheran — and never again after Concordia Lutheran moved to 3715 London Road in 1970 and Belfry House of Gifts and Indianhead Electronic Supply began occupying the space in the early 1970s.

After they got married, the couple shopped for a new place to worship and settled on Lake Street United Methodist Church, where they are still members.

Their wedding day was memorable for reasons beyond the beginning of their matrimony, the bride’s stunning white dress and the Christmas theme of the floor-length emerald gowns worn by bridesmaids carrying bouquets of red poinsettias — colors not captured in the black-and-white photographs that fill their wedding album.

When Dick and Rosemary walked into the church, it was a beautiful evening. By the time they walked down the aisle after the ceremony, the city and their 1955 Oldsmobile 88 were engulfed by a major snowstorm — always a risk for a December wedding in Wisconsin. The blanket of white covering downtown explained why a number of out-of-town guests hadn’t been present for the ceremony.

“We heard later that people started to come from St. Paul and places like that, but they had to turn around because it was snowing so hard,” Rosemary said, with Dick pointing out that this was before Interstate 94 was built.

“Despite the weather, it was a good day,” Rosemary said, adding with a chuckle that it would have been pretty crowded inside the small church if all the invited guests had conquered the weather.

The snow didn’t stop the wedding party and friends and family who braved the storm from celebrating at the reception just a few blocks away on Barstow Street at the former American Legion post, which occupied the massive former Municipal Auditorium — where Dick and Rosemary saw many Big Band stars that performed there while traveling by train between Chicago and Minneapolis.

Their courtship began when Dick got out of the U.S. Navy and his sister decided he should meet Rosemary. After a number of movies and concerts, Dick surprised Rosemary on the Fourth of July by renting a canoe, taking her out on Half Moon Lake (even though he knew she was a nervous boat passenger) and proposing in the middle of the lake.

“I knew she couldn’t swim. She had to say yes,” Dick said, sparking a round of laughter among the couple and yours truly.

But when I asked them if they felt nostalgic about the end of the place that sparked this happy trip down memory lane, both Dick, 90, and Rosemary, 85, shook their heads.

“Our connection with the building was just so coincidental,” Rosemary said.

So while the Mitchells might not have an emotional attachment to the former Belfry building and thus aren’t overly saddened by its razing, they do have fond memories of the only time they were inside it.

They will mark that occasion in nine days when they celebrate their 64th wedding anniversary.