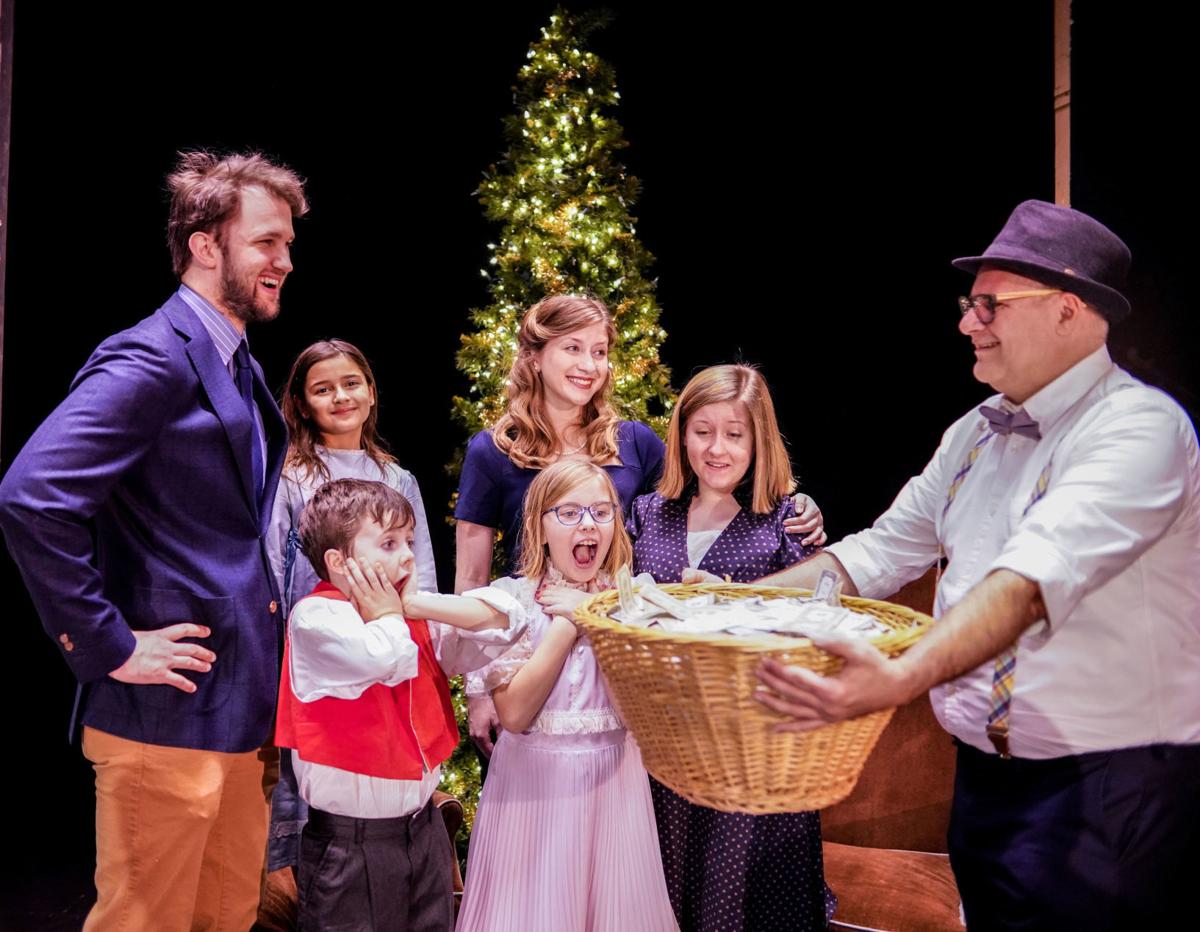 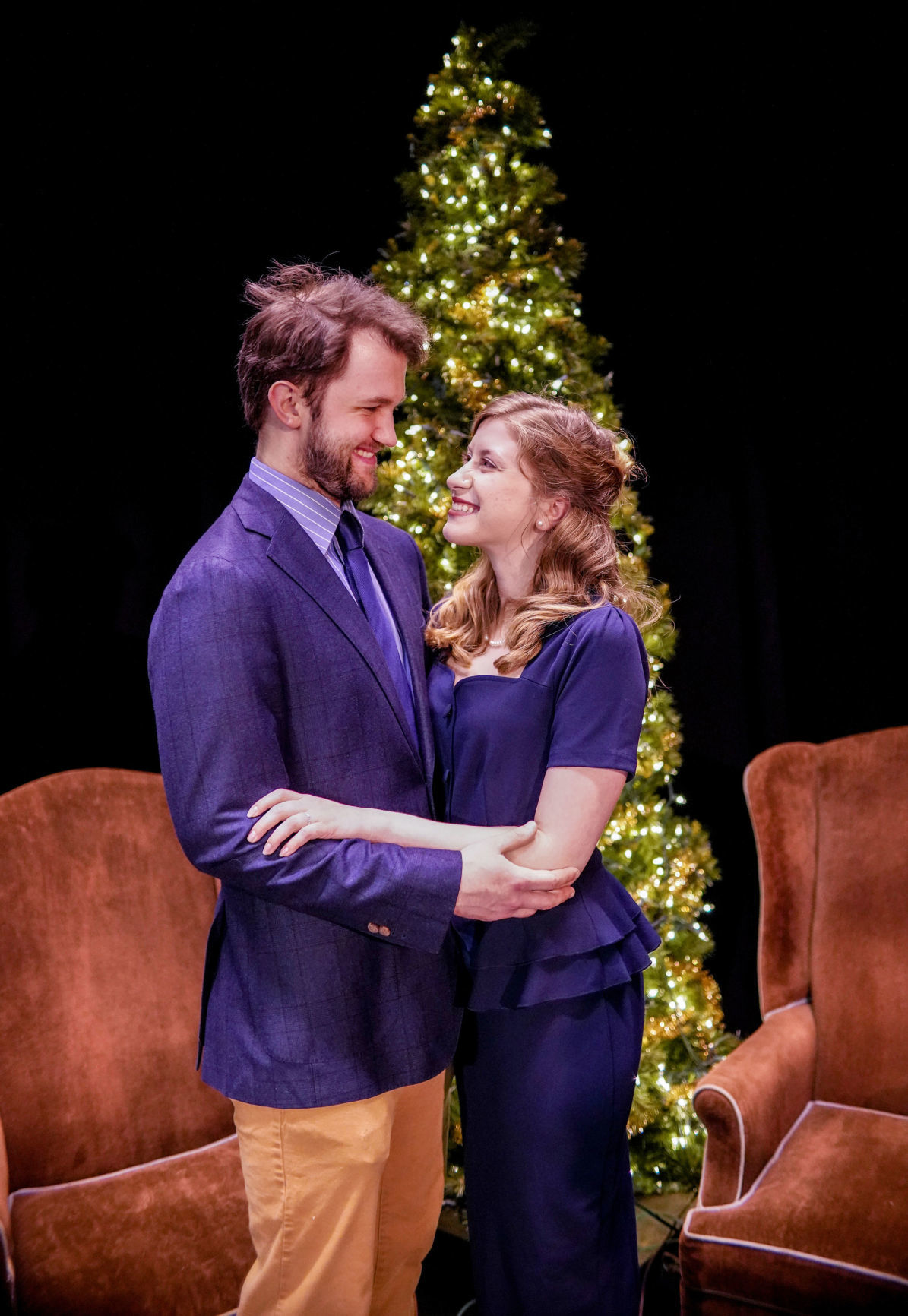 Jack Pritchard plays the role of George Bailey and Molly Wilson plays his wife, Mary, in the Chippewa Valley Theatre Guild production of the celebrated Christmas story "It's a Wonderful Life."

Jack Pritchard plays the role of George Bailey and Molly Wilson plays his wife, Mary, in the Chippewa Valley Theatre Guild production of the celebrated Christmas story "It's a Wonderful Life."

“It’s a Wonderful Life” ranks as one of the greatest films ever made, and those involved in the local theatrical production of the holiday classic count themselves among its fans. They also want to bring a fresh perspective to the beloved story.

“This is the fine line you have to walk,” said Tim Carter, director of the Chippewa Valley Theatre Guild staging. “We have to stay true to the movie and stay true to what everybody expects out of the movie. But at the same time we have to give them a reason to come see the show. If you can watch it at home, why come out and see it? We’ve made certain changes and certain choices that I think really heighten elements of the movie that you don’t get to see.”

Premiering Thursday, the production centers on the despondent George Bailey, who, on the brink of giving up, is met by the angel Clarence Oddbody and taken on an eye-opening and heart-rending journey through a world in which he never existed.

Two of the leads in the production talked about being faithful to the original while making the show their own.

“There’s a lot of nostalgia, and we have to play to that, of course,” said Jake Pritchard, who portrays George. “But we also are trying to make something new out of the old. We’re trying to strike a balance between playing to people’s nostalgia while also giving them something to see that they haven’t before, because if we just went onstage and did the movie then you might as well stay home and watch the movie.”

Molly Wilson, who plays George’s wife, Mary, noted that theater has a natural advantage in making a story feel new: the live setting.

“I’m excited for when we get an audience,” Wilson said, “because every theatrical experience that I’ve had thus far has been different. I’ve done shows that you do them three weekends in a row and every single show is different because of the people that are in the room with you. You’re experiencing the story together.”

In that regard, Pritchard has found how special it is to enjoy the tale anew.

“It definitely gets emotional just because you see these moments on the screen and they’re so iconic,” he said. “But then you get in there and do them yourself, and you kind of understand why they’re so iconic because of your understanding of what the characters are doing and you’re trying to feel that frustration and that love and that confusion all at the same time. It’s wonderful.”

Carter, Wilson and Pritchard spoke on a recent evening at the Theatre Guild office as young children’s footsteps and exclamations echoed through the building. The wide age range of the cast demonstrates something else the play has going for it: a chance to experience holiday cheer and poignancy in person with an all-ages group.

“Once we got up on that stage, the kids just went nuts,” Carter said. “They lit up. We had the tree up there for the photos. The kids found these prop presents, and all of a sudden they’re just like, ‘Are these real? Are these real? Are these for us? What are we doing with these? Which prop is ours? Which costume is ours?’ That kind of stuff. So it was fun to see them kind of light up like that.”

Regarding the lively activity, Wilson quipped, “There’s never a lack of energy,” while Pritchard added, “The stage is always buzzing.”

To be sure, Carter, Pritchard and Wilson agreed the film deserves its lofty place in the holiday canon.

“I love the movie,” the director said, explaining he got a later start than some in seeing its magic on the screen.

“It wasn’t until high school, I think, that I started getting into older movies,” he said. “I didn’t start watching it until then. But ever since then it’s every year. You have to.”

Carter, who studied film and video production in college, pointed to reasons why it’s possible to watch it once a year — or more.

“There are some film things about it,” he said. “Just that it’s made in such a way that it’s easy to watch. It’s not a movie that is out to confuse you, or story-wise it touches such an essential part of people, I think.”

Pritchard acknowledged he finds certain elements of the film dated. “But the heart of the movie is fantastic,” he said. “The characters are more complex than you would ever really think. You hear about ‘It’s a Wonderful Life,’ it’s a feel-good Christmas movie — you’re inclined to just write it off as like a Hallmark movie almost. But when you watch it and you think about it, there is a lot going on between all the characters and the community dynamics and everything.”

Without hesitation, Wilson awarded the film a 10.

“I, along with a lot of people my age, grew up watching it every Christmas,” she said. “So it was kind of a blast to hear the guild was putting it on.”

The place “It’s a Wonderful Life” holds as a treasured gem in pop culture may cause the story to be seen in a simplified or stereotypical way. But the play can home in on its complexities.

“I was fascinated to read that it was a very angry performance by Jimmy Stewart because he was dealing with PTSD after the war,” Wilson said. “It was Lionel Barrymore, who played Mr. Potter, that coaxed him to come back to Hollywood. And so a lot of that came out in his performance, I feel.”

She referred specifically to the so-called telephone scene, in which George expresses anger at Mary, even getting a bit physical. “I think that’s true frustration coming through,” she said, adding with a grin, “There’s not a lot of that (in the local stage production), knock on wood.”

For Carter, part of the film’s effectiveness lies in the fact that it doesn’t focus solely on the holiday season and speaks to life in general.

“Something that is so interesting in this movie and this play is that only a small portion of it takes place at Christmas,” he said. “So much of it is about his whole life leading up to Christmas. And it captures a much fuller experience of what life is like and of how good life can be so even at those dark moments Christmas comes through and life comes through and it’s joyful and it’s joyous.”

Perfect or near perfect scores from critics and audiences notwithstanding, Pritchard pointed out that appreciation was far from universal upon the film’s release in 1946, which he attributes to the richness of the story and characters — something the theatrical production can highlight.

“It kind of flopped,” he said. “There’s a lot of complexity that many people were not expecting when they went into the movie. But I think people started to appreciate that the more they saw it, how the whole world has kind of developed and changed, and America specifically.”

Notably, Pritchard found the story examines the American dream and the tension between family and work life.

“It doesn’t demonize choosing one or the other, but there’s not the happy ending of, oh, you get everything,” he said. “You don’t have a financially successful business and the family you’ve always wanted. You do have to choose and make sacrifices. I think that speaks to everybody in some capacity. No one can get everything, but you have to choose what’s more important.”

But there’s no mistaking the positive message that shines through at the end.

Like Wilson, Carter brought up the fact that Stewart and others who worked on the film fought in World War II and considered how that might have affected the 1946 production.

“All these guys went through such horrible ordeals during the war and they came back and then made this movie trying to make sense of the bad things that they had just experienced,” he said. “And I think this movie is the perfect answer to that. When you’re going through something bad or something traumatic, life is still wonderful or life is still good and it’s still worth living and worth experiencing … The message of the movie is, they say it very plainly: Nobody is a failure if you have friends, if have a community, if you have people in your life, if you have love and all of that.”

Wilson pointed out one of the film’s most notable aspects. “I think there’s also the literal element of he has a literal angel on his shoulder,” she said. “And the only devil is his own thinking. It’s not an absence of danger, but it’s a different version of it.”

Some who attend the Theatre Guild’s production may not know every plot twist or line of dialogue — or may never have seen the film at all. Pritchard is keeping folks like that in mind.

“As much as we know that people who loved the movie and loved the story are going to come see the show just to see it done on stage, for me at least I’ve been trying to think of it for someone who’s never seen it before,” he said. “Or someone who doesn’t know the story. … This is how they’re going to see the story forever.”