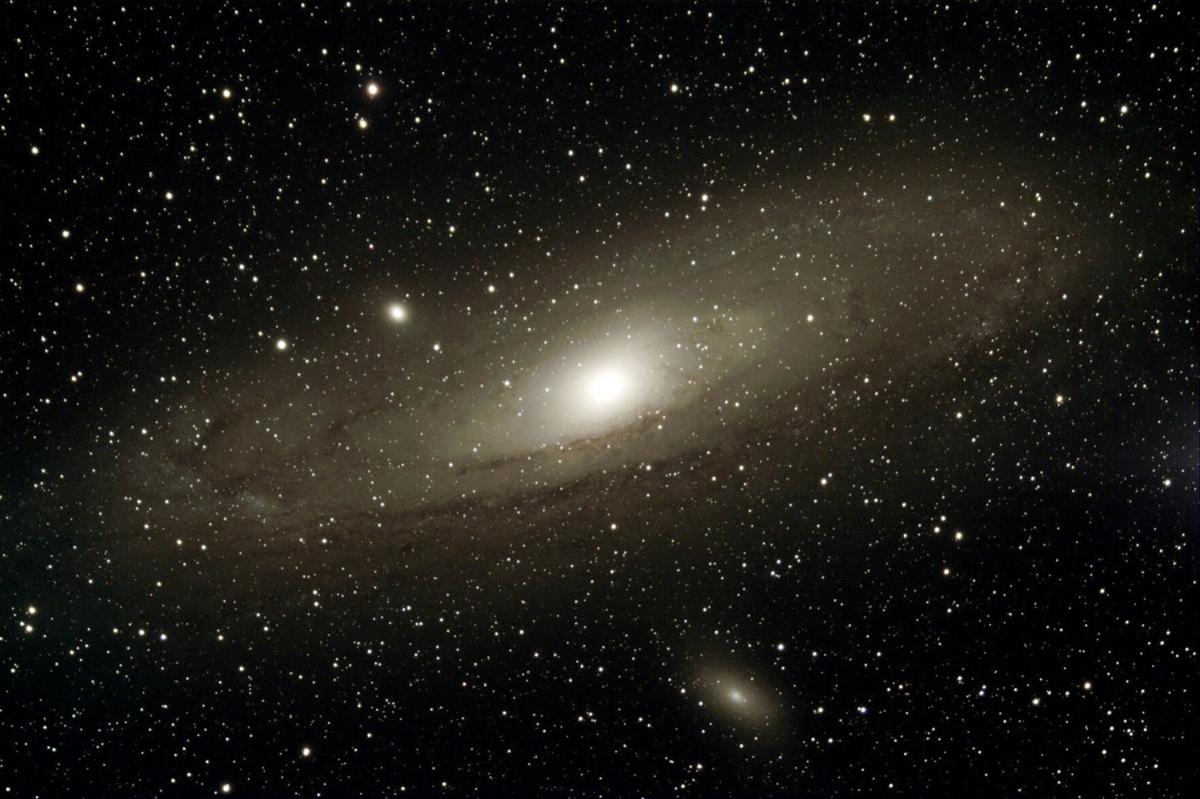 This astrophoto of the Andromeda galaxy shows the dark dust lanes, the two small fuzzy companion galaxies, and the bright galaxy core that can be seen with binoculars or even naked eye. 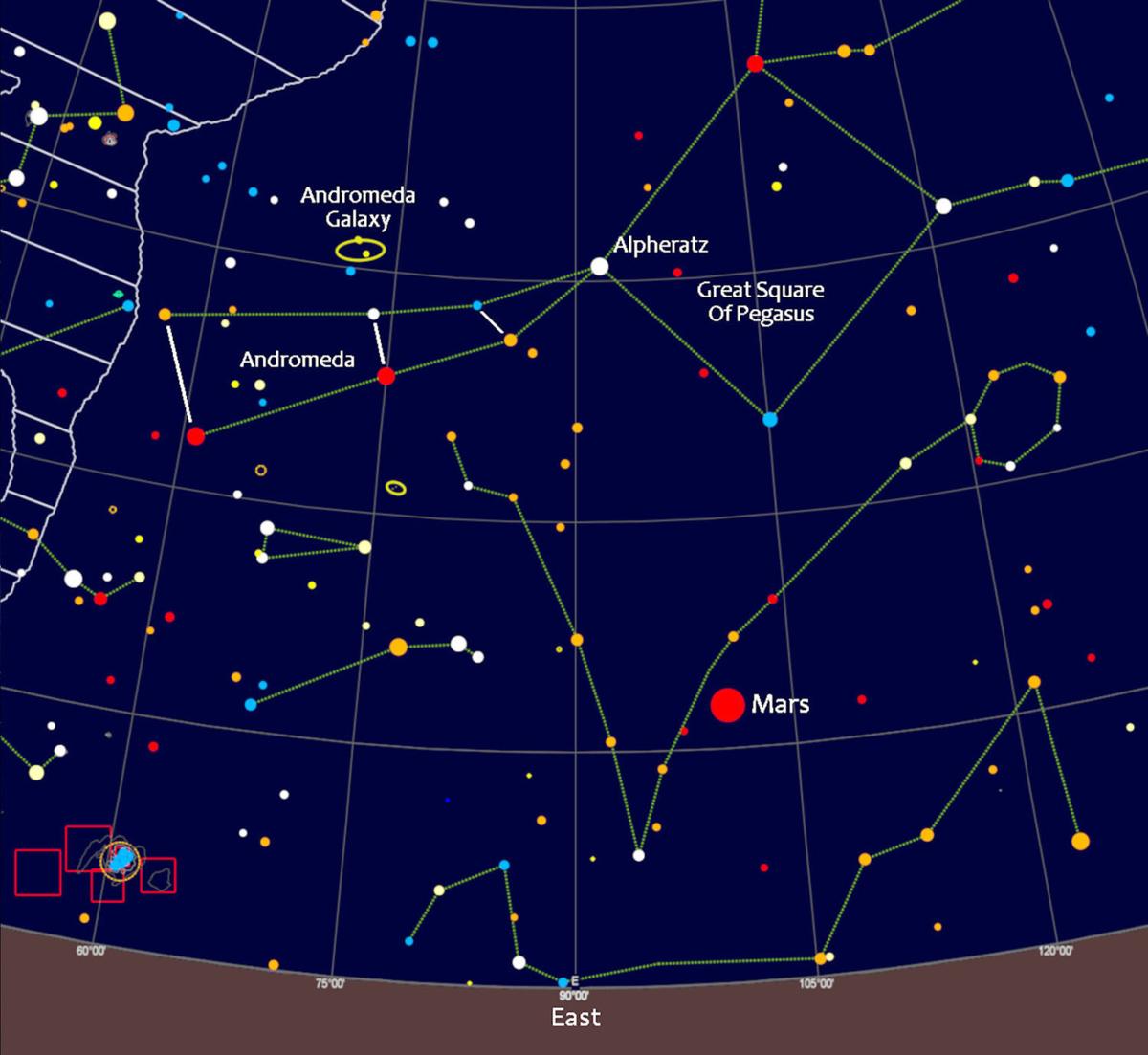 The location of the Andromeda galaxy is shown on this finding chart relative to the Great Square of Pegasus and the stars in the Andromeda constellation.

This astrophoto of the Andromeda galaxy shows the dark dust lanes, the two small fuzzy companion galaxies, and the bright galaxy core that can be seen with binoculars or even naked eye.

The location of the Andromeda galaxy is shown on this finding chart relative to the Great Square of Pegasus and the stars in the Andromeda constellation.

Editor’s note: Astronomy Update is provided by the Chippewa Valley Astronomical Society and is compiled by Lauren Likkel, an emeritus of the UW-Eau Claire department of physics and astronomy.

Greek mythology tells the story about Andromeda, the daughter of Cepheus and Cassiopeia.

Cassiopeia often boasted that her daughter was more beautiful than the Nereid sisters. This upset Poseidon immensely, so he had Andromeda chained to a seaside cliff and then summoned the sea monster Cetus to devour her.

Fortunately, she was rescued by the hero and monster-slayer Perseus, and she became his wife and his queen.

When Andromeda’s namesake constellation rises in the east in early September, it’s a sign that fall is very near.

You can find the constellation by looking east at about 8 p.m.

This year, while looking east, you will notice a very bright reddish star about 20 degrees up, which isn’t actually a star but is the planet Mars.

Mars was at opposition on Tuesday, meaning the Earth passed directly between it and the sun.

This year Mars’ opposition occurred when it was close to perihelion, which is the point in a planet’s orbit when it is closest to the sun.

This combination of opposition and perihelion places Mars closer to Earth than it will be for another 15 years, and this accounts for the planet’s extra brightness.

Once you find Mars, look another 25 degrees up and locate the Great Square of Pegasus formed by four fairly bright stars in an area of sky that looks rather empty of any other stars.

From the leftmost star of Pegasus known as Alpheratz, you’ll find three pairs of increasingly spaced stars trailing off to the left. These stars are part of the Andromeda constellation and will help you find the Andromeda Galaxy.

Taking note of the distance between the middle pair of stars, look that same distance above the top star of the pair.

If you are in a dark enough location, and there is no moon out, you will see the faint stretched out smudge of the Andromeda Galaxy.

Using averted vision, which is looking slightly to the left or right, may help see the galaxy.

If you still can’t see the galaxy, try using binoculars, which will make seeing it quite easy. A small telescope will reveal more detail as well as its two small satellite galaxies.

If you can see the galaxy without binoculars, you are then seeing the most distant object visible to the naked eye.

A light year is the distance light travels in one year or about six trillion miles.

Our own Milky Way galaxy is made of roughly 500 billion stars.

The Andromeda Galaxy is estimated to contain about one trillion stars. Andromeda is the closest major galaxy to our own Milky Way.

The Andromeda galaxy is moving towards the Milky Way at about 69 miles per second.

If you like to plan for future events, note that in about four billion years Andromeda will begin colliding with the Milky Way.

Before you end your observing session, turn towards the southwest and look for Jupiter and Saturn.

Jupiter is the very bright “star” and Saturn is to its left.

In the next two months, the apparent distance between these two planets will get smaller and smaller. The pair reach a stunning conjunction (the point of aligning with each other) and appear only a fraction of a degree apart on December 21.

Mike Brown is a member of the Chippewa Valley Astronomical Society.