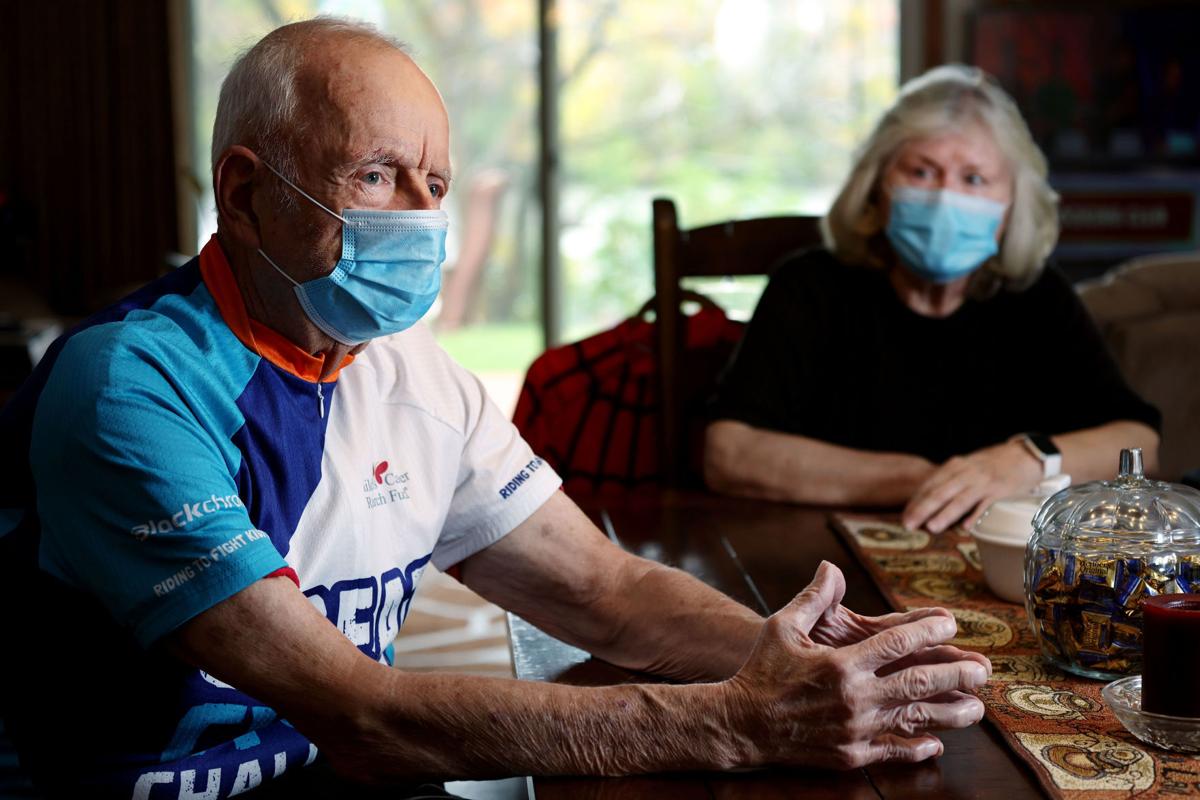 Jerry Strizic of Chippewa Falls, with his wife Priscilla Strizic, talks about his stage 4 esophageal cancer and how he took part last month in the Great Cycle Challenge, biking 300 miles and raising $3,000 for childhood cancer. View more photos at LeaderTelegramPhotos.com. 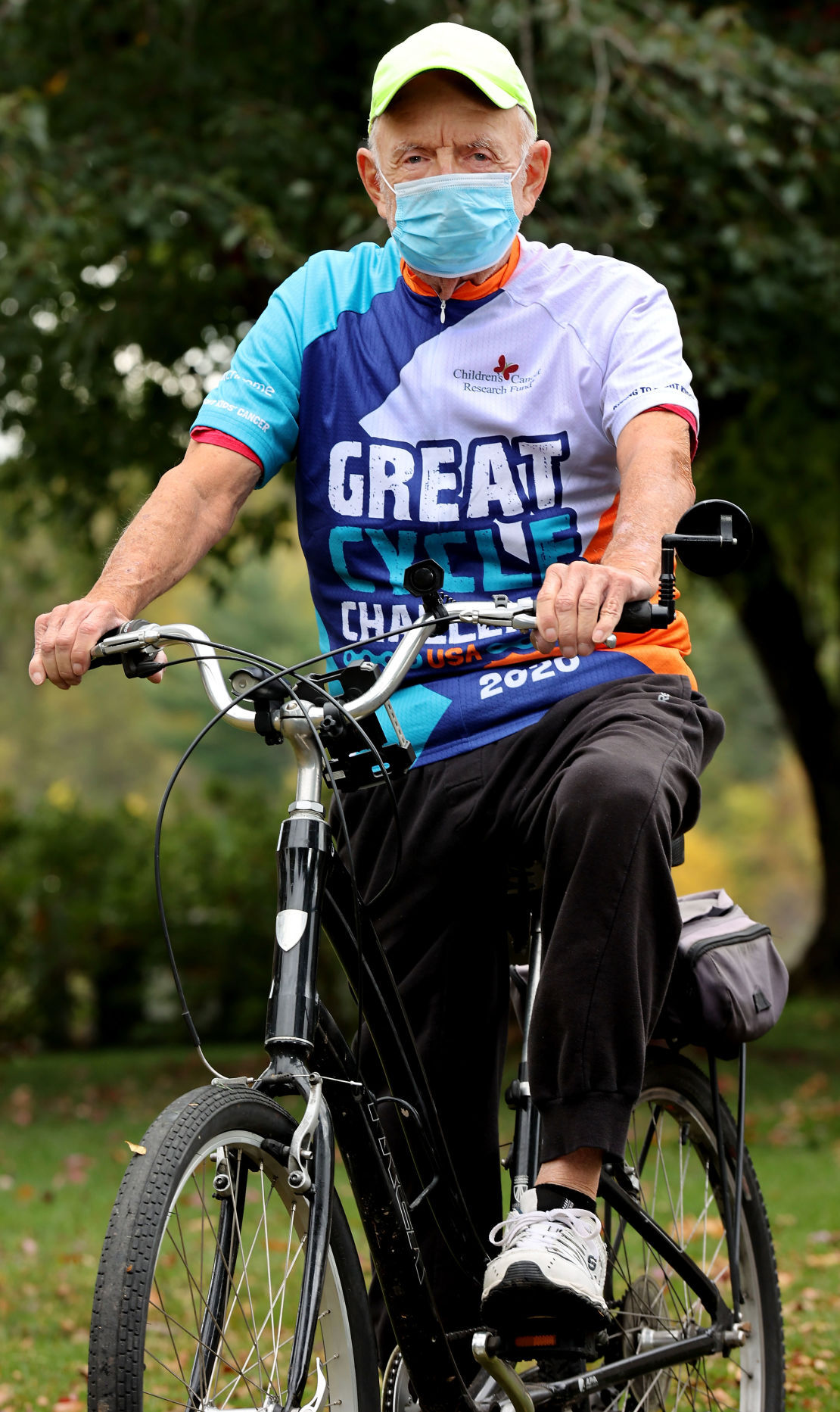 Jerry Strizic of Chippewa Falls, with his wife Priscilla Strizic, talks about his stage 4 esophageal cancer and how he took part last month in the Great Cycle Challenge, biking 300 miles and raising $3,000 for childhood cancer. View more photos at LeaderTelegramPhotos.com.

CHIPPEWA FALLS — Jerry Strizic gained a sense of service at a young age. Growing up working in the family bar near Holcombe, he enjoyed helping others and has continued to do so throughout his 77 years of life.

His willingness to serve had a tangible effect last month when Strizic rode his bike and raised more than $3,000 during the Great Cycle Challenge, a monthlong national fundraising initiative to support the Children’s Cancer Research Fund.

Strizic biked more than 300 miles in September, a feat that occurred shortly after he was diagnosed with stage 4 esophageal cancer in August. That advanced form of cancer has spread to his lungs, thigh and liver. Strizic is currently undergoing chemotherapy treatment but hasn’t felt much of a physical change.

It was difficult hearing the news of his cancer, but Strizic quickly adopted a more optimistic outlook.

In September, most of those days involved his seven-speed bike. Strizic completed 19 rides totaling 301.4 miles, usually in Chippewa Falls and Eau Claire.

“Pretty good for an old guy,” Priscilla Strizic, his wife of 40 years, said with a smile.

Jerry Strizic raised $3,000.54 for children’s cancer research in September, which placed him 12th overall in Wisconsin. The GCC raised about $14.5 million total nationwide in September.

His initial goals involved biking 200 miles and raising $500. When donations started pouring in from friends, family and acquaintances, Strizic was joyfully surprised and felt motivated to ride more.

“I’m sure the amount of money I raised had a lot to do with my situation,” Strizic said. “Because of what’s going on, people have reached out more. It’s been unbelievable.”

He usually biked alone but sometimes went with his son and daughter-in-law. Strizic often rode in the morning, ideally on a day with little wind. He often took a trail route between Chippewa Falls and Eau Claire, keeping a consistent speed during the ride and greeting everyone he saw.

While regularly biking 12 to 15 miles with the occasional 24- or 30-mile ride, Strizic did not feel physically weakened. He said the fitness maintained by riding bikes during the past 15 years has helped his life overall. He even biked the dozen or so miles to his first chemotherapy treatment and was driven home afterward.

Strizic recently completed his third cycle of chemotherapy, which he has every two weeks. The treatment hasn’t affected him much physically, and Strizic is still able to bike and volunteer three or four times per week.

Strizic was told he had about a year to live when chemotherapy started, but his prognosis is uncertain. He had a similar type of cancer four years ago and required surgery. As of now, Strizic is expected to require treatment for the rest of his life.

At the same time Strizic received his diagnosis, Priscilla Strizic was receiving radiation treatment for stage 2 breast cancer, which is now in remission.

“It’s one of those situations where you’re either going to cry or laugh,” Jerry Strizic said.

As with anyone, the Strizics have had tough times. Some days, the harrowing reality of cancer “knocks the wind out of you,” Priscilla Strizic said.

However, the couple have accepted their situation and feel that an encouraging attitude can’t hurt. Jerry Strizic doesn’t appear to spend too much time dwelling on his diagnosis.

“I’m not talking like this is all over yet,” he said. “A lot of people have been around for a long time, and this (cancer) could go into remission.”

Liz Johnson is Priscilla‘s cousin and met Strizic about four decades ago. Shortly after his diagnosis, she said, Strizic carried on living each day as fully as possible.

“He didn’t skip a beat,” Johnson said. “It was just another day, because that’s how Jerry is.”

Strizic also is pursuing bucket list-type activities. He always wanted to skydive and is scheduled to do so for the first time this week. He also wants to visit the former Yugoslavia, where his father is from.

Strizic is a retired truck driver but continues to volunteer, which includes providing transportation a few days a week for Chippewa Falls Shared Ride. He also plans to ride his bike multiple times per week as long as the weather permits.

“Jerry just likes to give,” Priscilla Strizic said. “I think he has a wonderful attitude, and I think that’s going to go a long way with his health.”

As long as she has known him, Johnson said Strizic has possessed a service-oriented, welcoming spirit.

Strizic has a lifelong affinity for helping others, but he said that characteristic isn’t unique to him.

“I think everybody has that,” he said. “They just have to find it. I don’t think I’m special. I think everybody likes to give ... You can’t buy that joy you get when somebody appreciates something you do for them.”

Strizic’s life has consistently involved service, and he will continue to give while battling cancer and supporting cancer research.