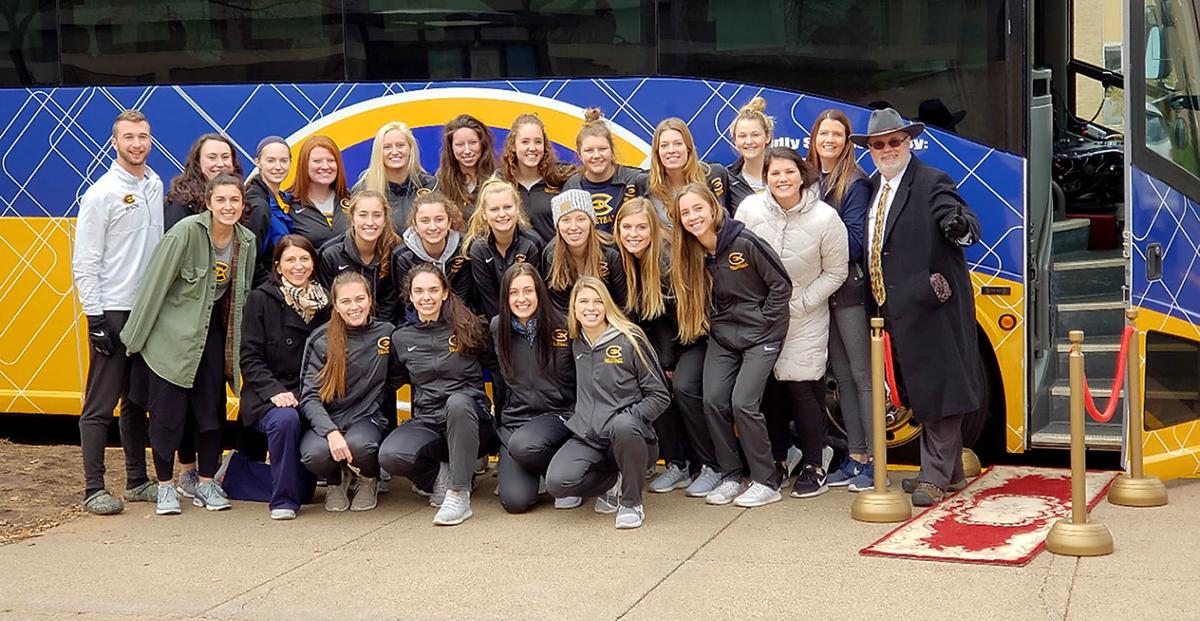 Kobussen Buses, which usually provide transportation for UW-Eau Claire and UW-Stout athletics teams in the spring, have been halted since mid-March because of COVID-19. Pictured is the Blugolds volleyball team heading to the NCAA tournament in 2018 with bus driver Curtie Harrison, right.

Kobussen Buses, which usually provide transportation for UW-Eau Claire and UW-Stout athletics teams in the spring, have been halted since mid-March because of COVID-19.

Kobussen Buses, which usually provide transportation for UW-Eau Claire and UW-Stout athletics teams in the spring, have been halted since mid-March because of COVID-19. Pictured is the Blugolds volleyball team heading to the NCAA tournament in 2018 with bus driver Curtie Harrison, right.

Kobussen Buses, which usually provide transportation for UW-Eau Claire and UW-Stout athletics teams in the spring, have been halted since mid-March because of COVID-19.

A dozen motorcoaches have been parked outside the Kobussen Buses terminal in Bloomer for the past month and a half.

The stationary vehicles are a symbol of the hardship faced by U.S. motorcoach operators as the COVID-19 pandemic slams the brakes on travel plans.

“We have not rolled a motorcoach since approximately March 20,” said Curtie Harrison, a Kobussen driver based at the Bloomer terminal. “The coaches are sitting idle as are our upwards of 90 coach drivers. There is zero revenue being generated.”

Harrison will join hundreds of other motorcoach drivers in Washington, D.C., next week in hopes of securing some economic relief for the 3,000 U.S. bus and motorcoach companies.

They will be rolling into the capital at 11 a.m. Wednesday to participate in a rally to support awareness of motorcoaches as a critical component of the country’s infrastructure and to seek federal assistance for the industry, which employs nearly 100,000 people.

Harrison, who plans to stream the rally on Facebook Live, is one of three drivers from Kaukauna-based Kobussen who will drive one of the company’s motorcoaches in the parade around Washington.

The rally is jointly organized by the industry’s two leading trade organizations, United Motorcoach Association and the American Bus Association. Each vehicle will carry messages about the industry’s impact and the need for $15 billion in government support for over-the-road bus carriers in the wake of the coronavirus health emergency. The groups are seeking $10 billion in grants for operational and payroll assistance and $5 billion in long-term, no-interest loans to the industry.

“The current economic remedies available to small businesses don’t address sectors like ours that will take much longer to recover from the current crisis,” Peter Pantuso, president of the American Bus Associaiton, said in a news release. “Airlines, Amtrak and transits have received more than $75 billion to prop up these industries.”

Harrison highlighted the challenge facing the industry by pointing out that each motorcoach costs nearly $500,000 and that payments and insurance can run more than $6,000 per month.

Spring is normally a busy time for Kobussen, he said, noting that the company typically provides transportation for athletics teams from UW-Eau Claire and UW-Stout as well as for K-12 school trips throughout the Chippewa Valley.

“We’ve lost all our spring business and summer travel months are looking very dismal, as every day we receive more cancellations from trips that would have taken place,” Harrison said.

While acknowledging the unprecedented uncertainty about how business will bounce back after what he called “the craziest time we’ve every lived through,” Harrison said Kobussen officials are optimistic about the start of fall travel. Still, the nearly six months of no income is going to be a difficult hurdle to get over without some form of federal funding, he added.

“This rally is taking place to bring awareness to the folks in D.C. that without federal help many companies will not be able to answer the call when the phone does ring,” Harrison said.

Aid also is needed, he said, to help the company support and retain its team of drivers, dispatchers, mechanics and office personnel.