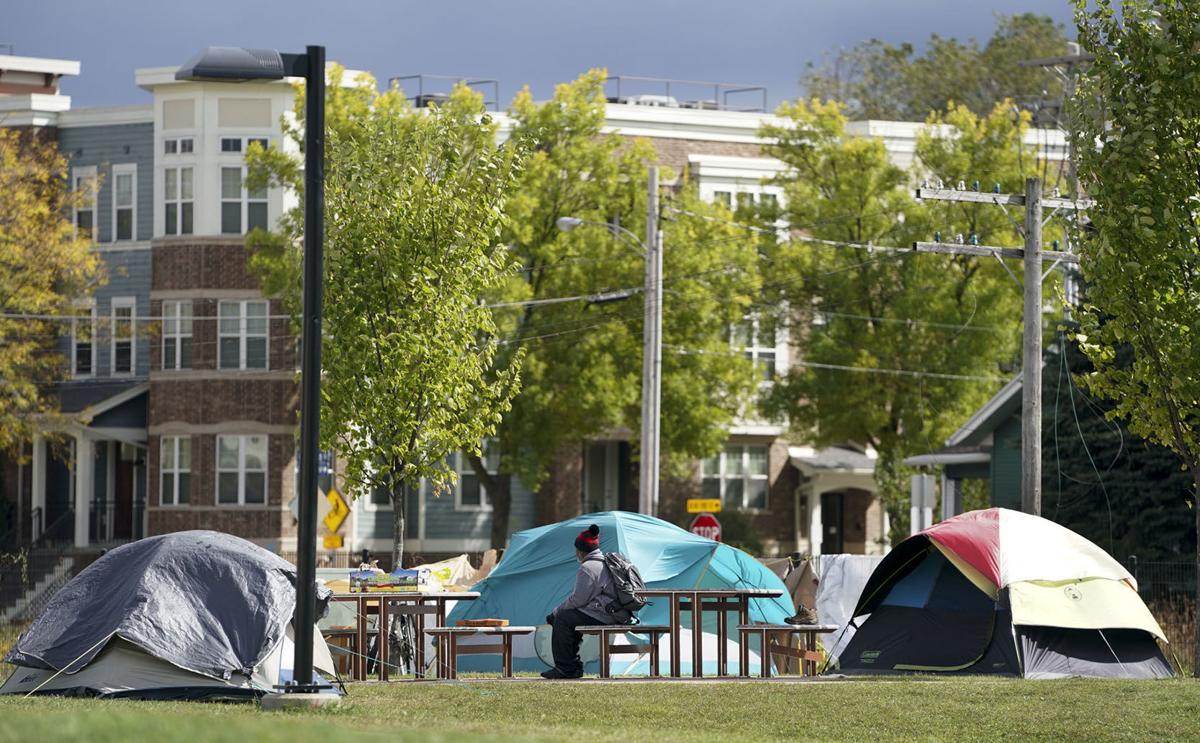 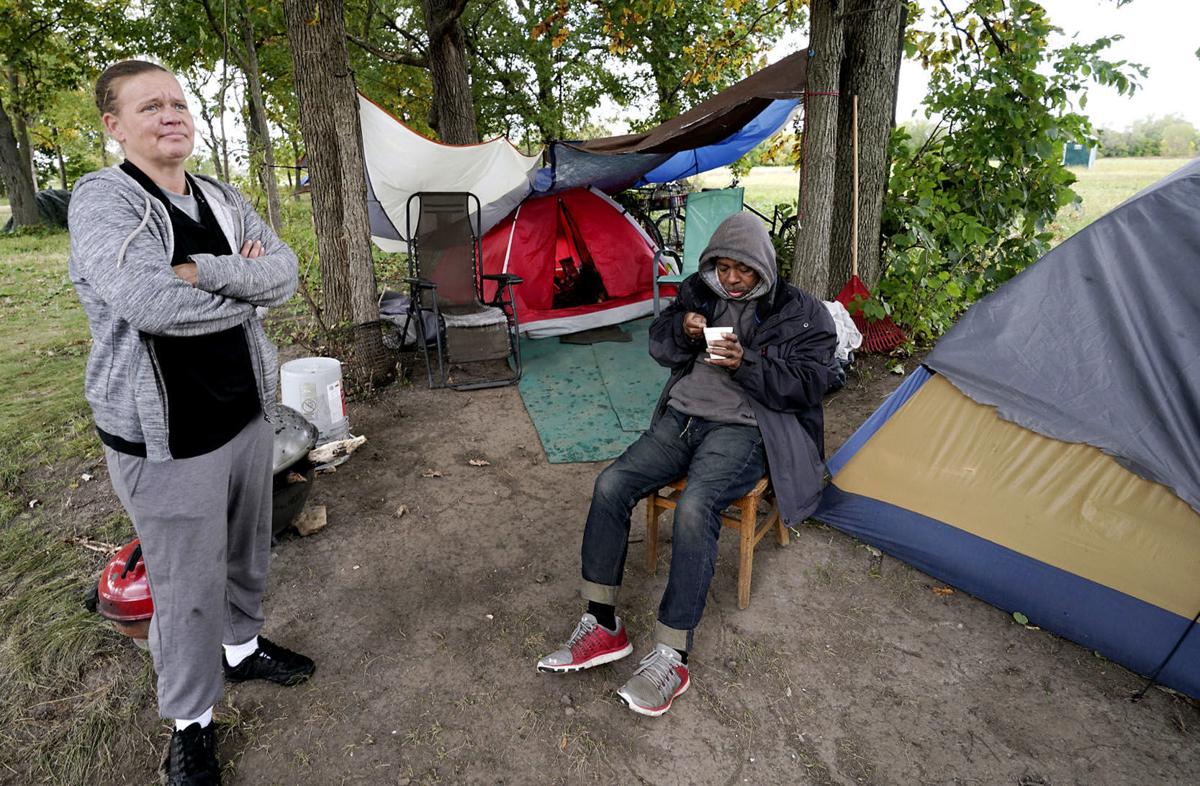 MADISON — As another Wisconsin winter looms, advocates are asking state and local leaders to take urgently needed steps to protect the homeless, a challenge made worse by the COVID-19 pandemic as many homeless people have been avoiding crowded shelters and living outside in vehicles and encampments.

The challenge is plain to see in Madison, where about three dozen tents cover part of a 9.2-acre park just 10 blocks from the Capitol. Other homeless have set up clusters of tents at Reindahl Park and other places where the city since May 7 has allowed temporary camps outfitted with portable toilets, hand-washing stations and trash containers.

The idea was to let homeless individuals camping outside stay where they were rather than risk dispersing them throughout the community and increasing the risk for transmitting the virus.

Many also felt safer on their own than in crowded shelters, despite stringent safety protocols.

The fate of the encampments is unclear. On Tuesday, Sept. 29, City Council members introduced a resolution to enforce laws against camping in city parks and to investigate other temporary housing options. The resolution will be referred to city committees with a council decision at a later date.

As of Sept. 30, the city and county reported 53 families with a total of 189 people being sheltered in hotels, while 28 families on a waiting list are likely living “doubled up” with others, city community services director Jim O’Keefe said. Some 175 singles are being sheltered in hotels for those seen as being vulnerable to COVID-19, while a respite center hotel set aside for people who have tested positive for COVID or who have exhibited symptoms consistent with infection had six occupants.

Meanwhile, some 60 women were using the Salvation Army of Dane County facility on the city’s near east side while 98 men were using a temporary shelter at Warner Park on the north side, he said. At least 200 others are believed to be staying in encampments, cars or on the street.

“As the weather begins to change we are increasingly concerned about the situation with encampments and other unsheltered arrangements and are discussing strategies that might reduce barriers to shelter and encourage more unsheltered persons to use that resource,” O’Keefe said. “Generally speaking, encampments are not a good solution — not for the campers and not for neighboring residents and businesses and park users. I don’t think we can normalize the use of encampments.”

The local encampments are the visible tip of a growing homeless crisis across Wisconsin.

“The predominant concern is the increase in unsheltered homelessness,” said Michael Basford, director of the Wisconsin Interagency Council on Homelessness. “This is happening throughout the state, urban, rural and in all areas. This is a universal issue in Wisconsin, with the only differences from community to community are scale.”

One of the city’s largest homeless encampments ever has risen less than a mile northeast of the Capitol, with tents of various shapes, sizes and colors dotting the north side of Madison’s McPike Park.

“I can’t deal with being in shelter,” said Regina Moore, who has been homeless before and shares a tent with her boyfriend. Still, she said she doesn’t feel safe camping. Another tent had recently been burned down, she said. She hopes to get a room at the YWCA and someday move to permanent housing.

The campers are an eclectic group. Some have been homeless for a long time, while others lost jobs in the pandemic or became homeless for other reasons. The sites are flush with belongings — chairs, grills, cookware, firewood, coolers and bicycles. For the most part, their tents, sleeping bags and gear aren’t made for winter.

“This is not the place to be if you’ve never been on the streets before,” said Ben Jackson, an outreach worker for the nonprofit Porchlight who works with many homeless living outside. “Many of these folks are novices when it comes to camping. It’s easier in the summertime. Now it’s going to get real hard.”

Advocates and nonprofits are pouring aid into McPike Park, as well as other encampments, such as a spot in Reindahl Park on Madison’s far east side, where a cluster of tents remain in a city-sanctioned spot despite the apparent beating death of a man in the vicinity in mid-September.

Jody Johnson, who suffers from lupus, has been staying with her husband, who is being treated for cancer, at the Reindahl encampment, which can be seen from busy East Washington Avenue. She said she sleeps with a can of mace and a knife for protection. “We need a place to live,” she said. “I had a place to live and a job. People ride by and stare at us like we’re not here. But we’re here. Without Ben (Jackson), we’d probably die.”

Several organizations, including MACH Onehealth, Tellurian UCAN, Friends of State Street Family and Sankofa Behavior & Community Health have combined to deliver food and other assistance to those staying in encampments each Wednesday and are also keeping track of health and other needs, even pets.

“During the pandemic, we serve sort of as a fire brigade, many days extinguishing the fires of trauma and crisis amplified during a pandemic,” said Karen Andro, director of Hope’s Home Ministries for First United Methodist Church set aside for persons who have tested positive for COVID or who have exhibited symptoms consistent with infection.

“Two of the women camping outside are pregnant, and one of the men has cancer who takes a bus to his radiation treatment,” she said. “Many have jobs and are camped relatively close to their places of employment. Often, the public views homelessness as a problem and circumstance people choose or ‘deserve’ and view help as a favor. This is the farthest from the truth.”

Still, the encampments raise questions about safety, both as it concerns preventing the spread of COVID-19 and crime.

At the camps, the tents are usually separated by several feet; some wear masks while others don’t. The encampments also generate a good number of police calls, ranging from disturbances to the recent homicide at Reindahl Park.

Madison Alds. Samba Baldeh and Zachery Henak on Tuesday introduced the resolution to rescind the emergency order allowing temporary encampments in some parks and greenways and to explore other options. Camping, the resolution says, may adversely affect the park, produces behavioral problems, can be intimidating to residents and creates other challenges including the need to close restroom facilities for the season because they’re not designed to be operated year-round.

But banning encampments create challenges, too. “This will send these people in every direction thus disrupting private-party services that supply everything from food to remote medical assistance to clothing and winter gear,” Jackson said. “This also increases the dangers to doing outreach to this group for any volunteers because of the more remote location the homeless will be moving to.”

The challenge is vexing for advocates across the state.

“The edge of the challenge is that shelters have had to reduce capacity due to COVID,” said Joseph Volk, executive director of the Wisconsin Coalition Against Homelessness. “Some cities and counties have tried to make up for that by renting hotels rooms, but most of that funding runs out the end of the year, right in the middle of winter. Our partners around the state are reporting increased numbers of unsheltered homeless persons and families.”

The state, Basford said, is trying to find a way to get people inside and safe during the winter and afterward, whether by increasing shelter capacity or moving as many people as possible into permanent housing. “Failing to do that would be an unprecedented catastrophe where many would be exposed to the Wisconsin winter and many could die,” he said.

Dane County has devoted $15 million of its $95 million CARES allocation for homeless services and strategies through the end of 2020 and set aside $10 million more in federal funding for an assistance and eviction prevention program, although that money has been depleted. Madison has allocated several hundred thousand dollars to support some of the cost for the temporary men’s shelter at Warner Park and other homeless services.

In his proposed budget, Dane County Executive Joe Parisi seeks to channel $9 million more in CARES funding to continue hotel support through June, which would prevent potentially putting more than 350 people on the streets. Mayor Satya Rhodes-Conway has begun planning for a new men’s overnight shelter, and Parisi would have the county contribute $3 million to the project.

The state, meanwhile, continues to distribute CARES funding to municipalities for homeless relief, with about $13 million already allocated and a second round of about $20 million coming over the next few months, Basford said. Also, the state has invested $25 million in federal funding into the Wisconsin Rental Assistance Program, which, combined with other efforts, has helped over 10,000 households and kept them out of eviction court, he said.

But frustration remains among advocates that the bulk of what would have been the state’s largest dollar increase to address homelessness remains stalled in the GOP-controlled Senate.

The legislation, based on proposals by the interagency council, passed overwhelmingly in the GOP-controlled Assembly last year and were echoed in Gov. Tony Evers’ first budget. But the eight bills, which would provide $7.5 million in new spending over two years, stalled in the budget committee, and seven never made it to the Senate floor for a vote. The one bill that did pass provides $1 million in additional funding to a grant program that supports emergency homeless shelters over two years.

“The biggest thing the state could do would be for Joint Finance to meet and release the funding that is already in the budget,” Volk said.

EAU CLAIRE — It’s 11 a.m. Thursday and a dozen or so people curl up on cots spaced out around the southwest end of a former grocery store, att…