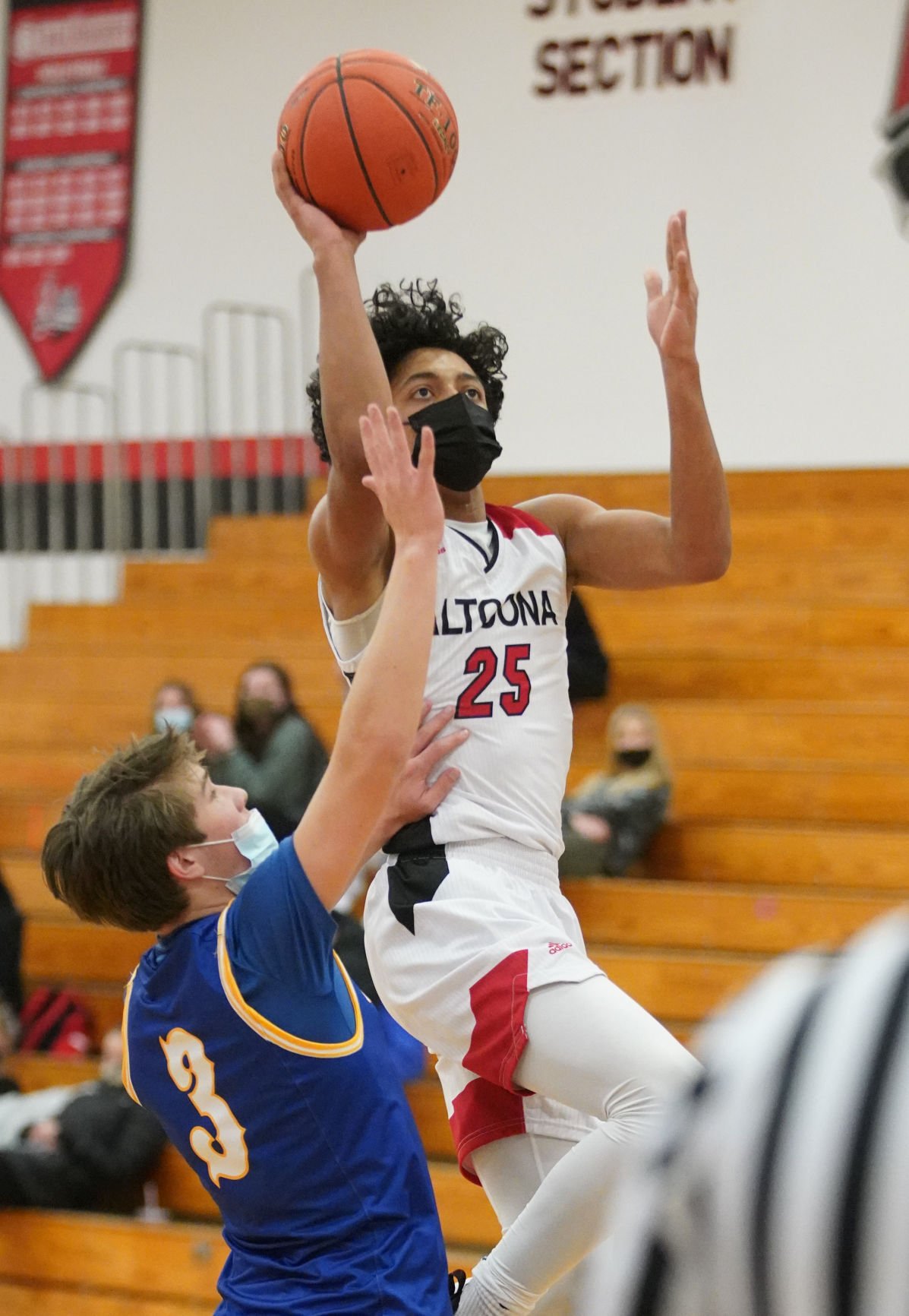 Altoona’s Marsten Salsbury-Parks puts up a shot over McDonell’s Max Hauser during a game on Thursday, Jan. 7 in Altoona. 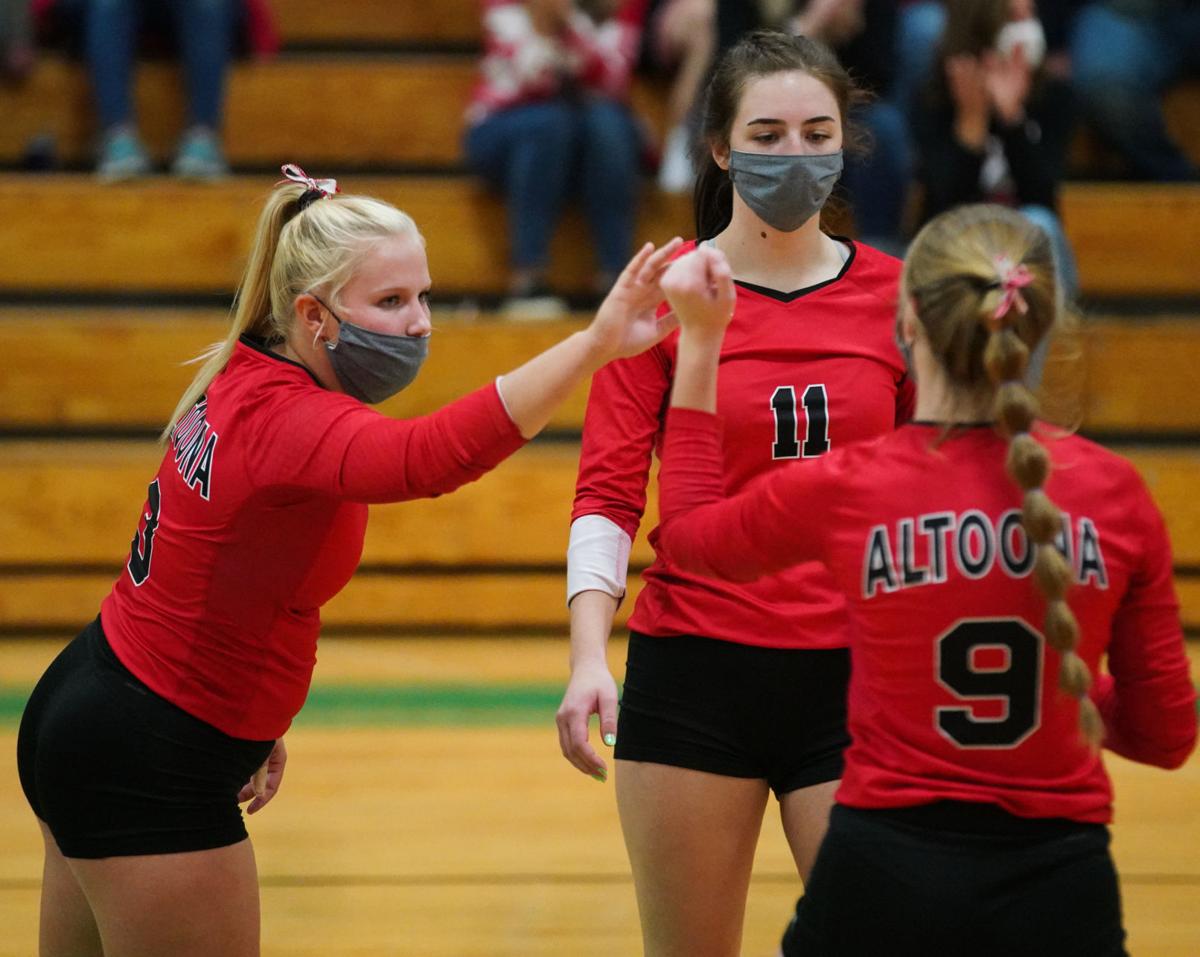 Altoona's Keelyn Marlaire, left, goes to high five Brittany Klatt while Mary Laporte looks on during a match against Regis on Oct. 1, 2020 at Regis.

Altoona’s Marsten Salsbury-Parks puts up a shot over McDonell’s Max Hauser during a game on Thursday, Jan. 7 in Altoona.

Altoona's Keelyn Marlaire, left, goes to high five Brittany Klatt while Mary Laporte looks on during a match against Regis on Oct. 1, 2020 at Regis.

You likely needed a chart to keep track of all the conferences Altoona athletics was a part of in recent years.

Most sports have played in the Western Cloverbelt, of course, but some have had to go elsewhere due to a lack of league members participating. Boys hockey players compete as a part of the RAM co-op, a member of the Middle Border. Boys tennis players also played a Middle Border schedule. Girls hockey players suit up in the Eau Claire Area Stars co-op, a Big Rivers team, and girls soccer plays in the sport-specific Mid-Western Soccer Conference. Girls tennis and boys soccer were independents.

Oh, and football got moved from the Cloverbelt to the Coulee Conference last fall.

“It’s really hard to have that community togetherness because you are basically going in different directions,” Altoona athletic director Elissa Upward said.

That list will be more streamlined starting next year. Altoona is moving from the Western Cloverbelt to the Middle Border in the fall after the district’s fast-track realignment request was approved by the WIAA’s Board of Control in March. The Railroaders are filling a vacancy created by the departure of New Richmond to the Big Rivers, and the Rails themselves were quickly replaced in the Western Cloverbelt by Bloomer.

Altoona’s basketball, baseball, soccer, tennis and boys hockey teams now all have the same home in the Middle Border. The Rails need to file a separate proposal to the WIAA to have football join the rest of the programs, something Upward said Altoona would like to do.

“The hope is in the future we get all of our teams over to the Middle Border Conference,” Upward said. “But we still have a little while to get there.”

The conference cohesion wasn’t the only factor in the decision. The most obvious motivator was Altoona’s size. At an enrollment of 461 students, Altoona was by far the largest high school in the Western Cloverbelt. It stands at 144 students larger than the second biggest school, Stanley-Boyd, and is more than twice as large as Cadott, McDonell, Regis and Thorp.

Upward said the growth of the district is projected to only continue. Altoona hit a new high last year in the amount of housing being built in the city, with permits for 264 dwellings being issued in 2020. That total even exceeded new permits in Eau Claire.

“The city of Altoona continues to experience historic levels of both residential and commercial growth and investment,” Joshua Clements, city planner, wrote in a report on Altoona’s 2020.

Altoona fits into the enrollment range of the Middle Border, entering the league ranked sixth out of the eight schools in size. The district is smaller than Amery (482 students), Baldwin-Woodville (465), Ellsworth (509), Osceola (505) and Somerset (486) but larger than Prescott (422) and St. Croix Central (446).

“Our school district has outgrown the size of the schools in the Cloverbelt,” Upward said. “We’ve known that for several years. But our enrollment numbers sit really well with the Middle Border schools. ... With that comes a similarity in the athletic offerings, such as tennis, soccer and hockey, sports currently not offered in the Cloverbelt.”

It also helps with scheduling at lower levels, which Upward said has been a problem for the school’s basketball, baseball and tennis teams. The Railroaders have four boys basketball teams, and head coach Paul Henrichs said the program has often had trouble finding dates for the lowest two levels.

“Most of the Cloverbelt teams don’t even get three teams, so we were really struggling to find games,” Henrichs said. “Moving to the Middle Border, I believe all of them have three teams for basketball. Scheduling-wise, it’s going to be a little bit easier for us.”

The biggest downside is travel, especially considering how convenient the Western Cloverbelt has been in that regard. The Railroaders are a victim of geography, with few schools their size playing right near Eau Claire. They’ve outgrown the Cloverbelt, but aren’t quite big enough for the Big Rivers.

“We’re pretty spoiled with what we had,” Upward said. “Not many conferences can say they can go down the road five minutes to get to one school, and I think the longest (trip) was about 45 minutes for us.

“But in regards to difference in travel, our location has historically caused us to travel greater distances, especially as we wanted to aim to compete with schools similar in size,” she continued. “Because of our size, the conference schools that we compete against during the regular season are often not who we match up during the tournament. Any way you look at it, schools our size are just not super close to our location.”

Six of Altoona’s seven new conference foes are over an hour away, and Baldwin-Woodville is 56 minutes. Amery, Prescott, Somerset and Osceola are all over an hour and 20 minutes away, with Osceola the longest trip at an hour and 42 minutes.

The boys and girls basketball teams will be no stranger to the Middle Border. The girls played five games against Middle Border foes and the boys played four, with the girls’ entire three-game playoff run coming against teams from the conference.

“We kind of got our feet wet a little bit and are trying to pick up some games in the summer now, play some of those teams that we’re going to play,” Henrichs said. “Trying to get as familiar as we can about that conference.”