Aaron Telitz teams up with Jack Hawksworth to drive the No. 14 car for the AIM Vasser Sullivan Lexus team. 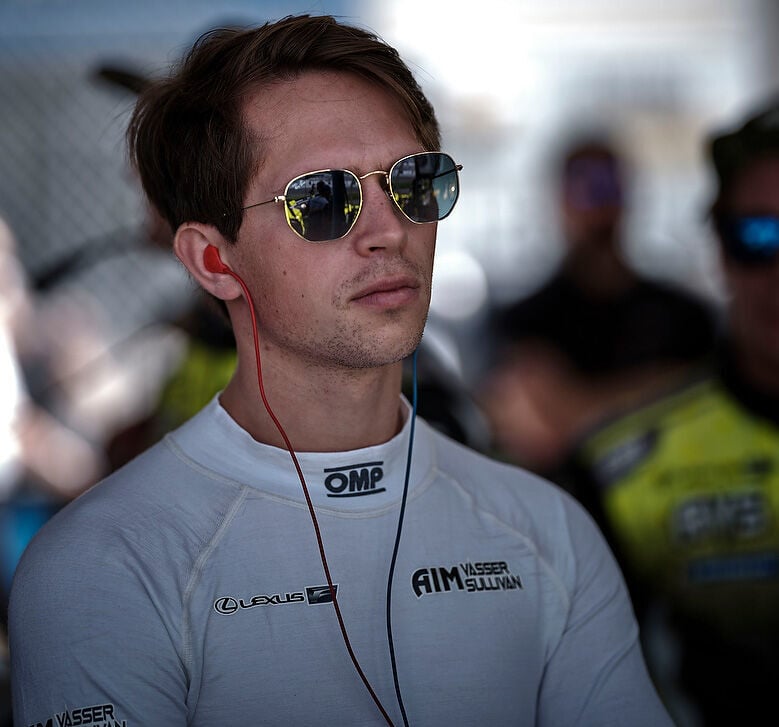 The Birchwood native and former UW-Eau Claire student was between races in mid-July, spending time working on the house he and his wife, Maggie, bought in Robbinsdale, Minnesota, after being married in October.

The other roof is in Telitz’s professional home — his race car. The 28-year-old driver has joined AIM Vasser Sullivan’s Lexus team for the 2020 WeatherTech SportsCar Championship series.

“I now have a roof over my head, so there’s not a lot of air flow,” said Telitz about one of the changes from driving a SportsCar rather than the open-wheel racing he’s done since kart racing as a young boy.

Car handling, a windshield, different tires, a V8 engine in the front of the vehicle and a helmet blower and cool suit to combat the 130 degrees inside the car were all new to Telitz when he was picked up by Vasser Sullivan part time last year.

Now, Telitz has a full-time ride, and he made the most of his first race in July at Daytona International Speedway. He and teammate Jack Hawksworth won the 86-lap race on a 3.56-mile road course with 12 corners in just under an hour and 48 minutes.

“It was a really good start. We qualified on the front row and stayed in front the whole way,” said Telitz.

In the two-driver format, Telitz serves as the qualifier driver and takes the first hour of the race. Hawksworth then takes over for the grind to the finish.

SportsCars — Telitz is in the GTD class — are made to look like production cars, or like street cars, but are loaded with racing equipment underneath. Lexus is one of seven car makers that sponsor race SportsCars.

“I’m really happy to be racing for my job. The SportsCars are so exciting. With so many manufacturers there are some real rivalries,” Telitz said.

Telitz came up through the ranks in open wheel racing, from karts all the way to Indy Lights, the step below Indy Cars. When the open wheel career stalled a bit, Telitz jumped at the SportsCar gig a year ago.

“I want to keep driving for Lexus AIM Sullivan. But maybe there will be an Indy option again someday,” said Telitz.

Telitz’s No. 14 yellow and black car has a red Rice Lake Weighing Systems sticker — the Rice Lake company has a been a Telitz car sponsor throughout his career.

“We want to keep that Rice Lake Weighing sponsorship going, now at the highest level I’ve been at,” said Telitz. Besides Lexus, the other major sponsor is Mobil 1.

Telitz will be in his home state this week as the series comes to Road America at Elkhart Lake. The Road America event is Friday through Sunday. Tickets to watch along the 4-mile road course are available at 2020 WeatherTech SportsCar Championship website.