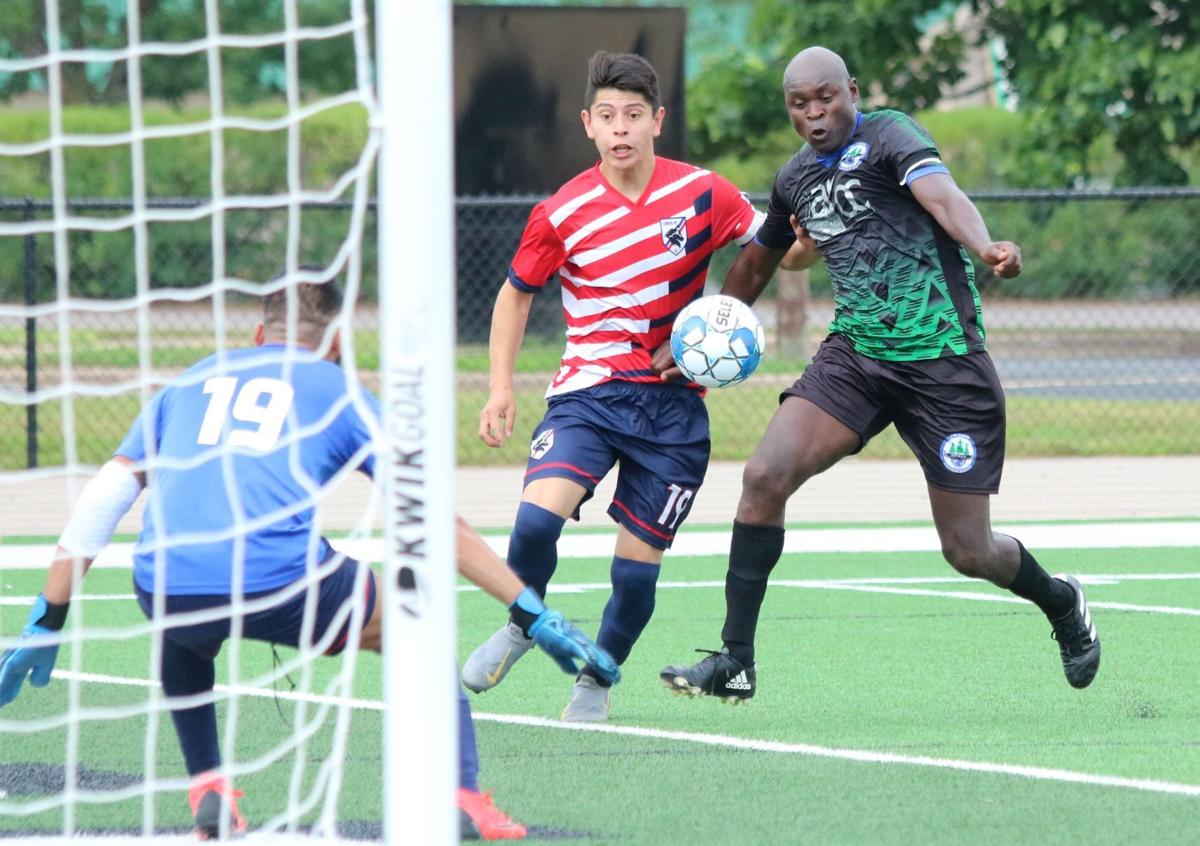 Bateaux FC’s Larry Mboga controls the ball moments before scoring the first goal of a game against Lobos FC at Regis on July 18. 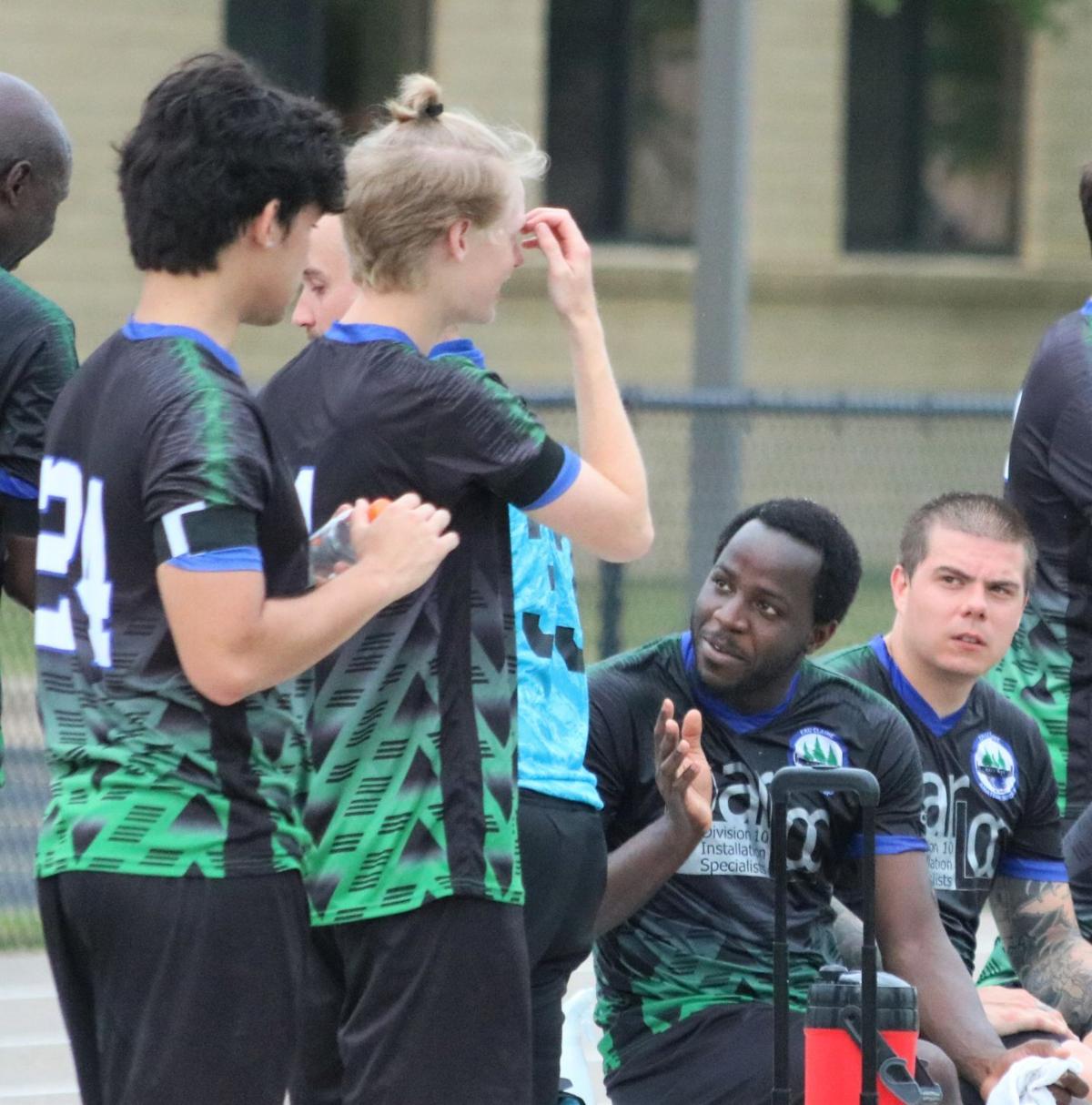 Bateaux FC players talk during a water break during a game against Lobos FC at Regis on July 18.

Bateaux FC’s Larry Mboga controls the ball moments before scoring the first goal of a game against Lobos FC at Regis on July 18.

Bateaux FC players talk during a water break during a game against Lobos FC at Regis on July 18.

This weekend will be a litmus test for Bateaux FC.

Now they’ll get a taste of life at the next level.

Bateaux is set to host Granite City FC of the United Premier Soccer League on Sunday in Eau Claire. The UPSL is a step above the WPASL in the league tier system, and Granite City offers Bateaux its first shot against a semipro team.

“We get a chance to challenge ourselves, and see where we’re at currently,” Bateaux captain David Ripplinger said. “We’re going to see: Are we able to compete at that level? Are we ready to make the jump?”

Bateaux, which is in its first season following a rebrand after a year as Eau Claire Heat, has aspirations to rise to the next tier of the United States soccer pyramid. Exhibitions against teams already at that level are one of the early steps toward that goal.

Bateaux has already seen the effects that winning a WPASL title can have. A match against a higher-tier club might not happen without the validity that a league championship can provide.

Winning the trophy this summer helped open the door for this kind of match to take place.

“We won the championship, so that put our name out there to a lot of the higher-level teams,” Ripplinger said.

“We had a lot of UPSL and NPSL teams that reached out, and we had to pick and choose which ones we wanted to get.”

The friendly against Granite City, a St. Cloud, Minn.-based club, was facilitated by Ripplinger’s ties to the UPSL. He has played for Vlora City FC, a UPSL club in Minneapolis, and the connection was made that way.

Bateaux’s match against Granite City will be played at Regis at 3 p.m. on Sunday. Fans are permitted to attend, but are asked to wear masks and practice social distancing.

As for the on-field product, Ripplinger said he’s optimistic for the match.

“I think we’re closer (to their level) than most people might think,” he said. “We have some amazing local talent here in our community, and we added even more after the season ended.”

That influx of local talent following the WPASL title has Bateaux excited. With the Eau Claire Area School District opting to play fall sports in the spring, a few high school players have joined Bateaux after trial periods. Eau Claire Memorial’s Devan Barragan-Briseno, Garrett Woodford and Matt Gyorfi have all been added to Bateaux’s roster.

“We’re excited to see how they stack up against this level of competition,” Ripplinger said. “Obviously our team wants to create opportunities for these players, and this is the perfect opportunity to show what talent Eau Claire has.”

The hope is that the addition of local talent and a step up in competition will help push Bateaux’s brand to the next level. Over the upcoming offseason, the club is looking to sell membership packages to fans, get into merchandising and grow in other areas as well.

The goal, Ripplinger said, is to get into the next league tier up in the next year or two.

“As our team continues to grow, I think it’s going to give more players incentive to want to play with our team,” Ripplinger said. “And we want to give our community a sense of ownership of our team. We want this to be a community team.”