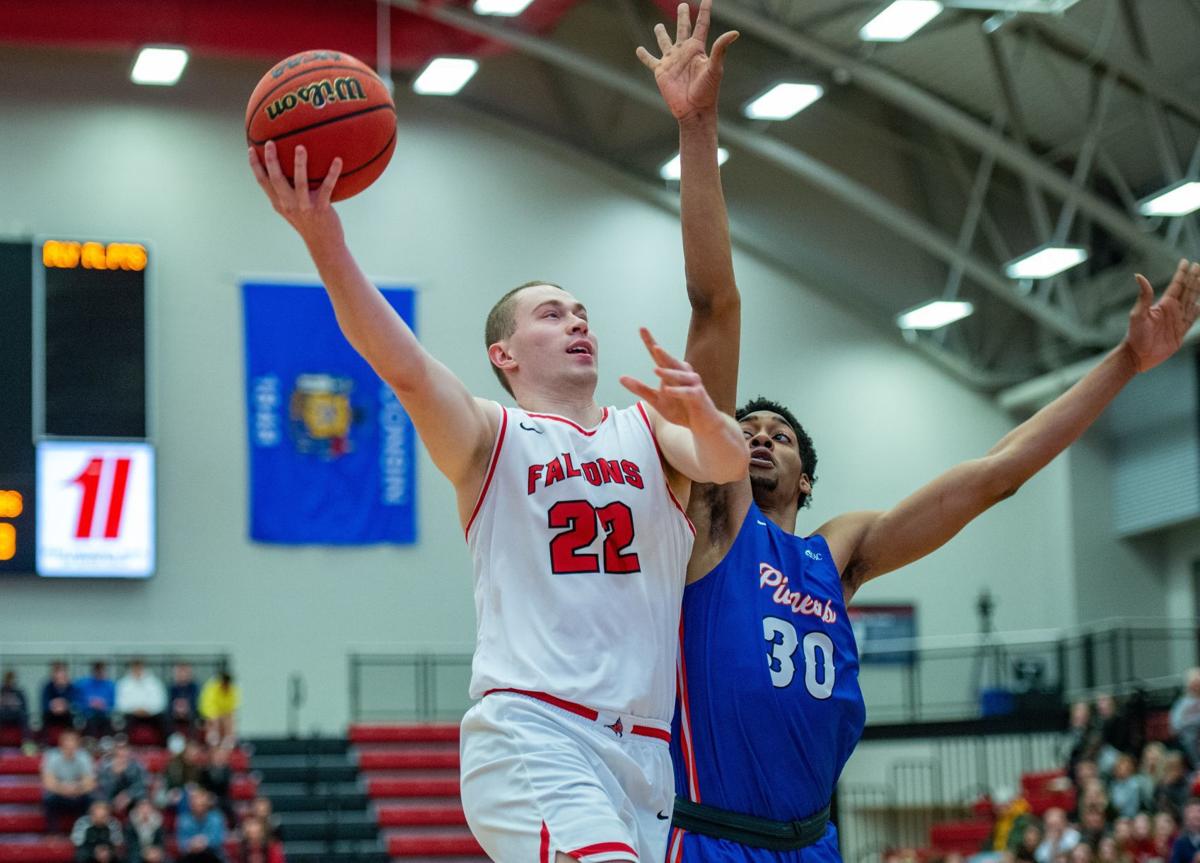 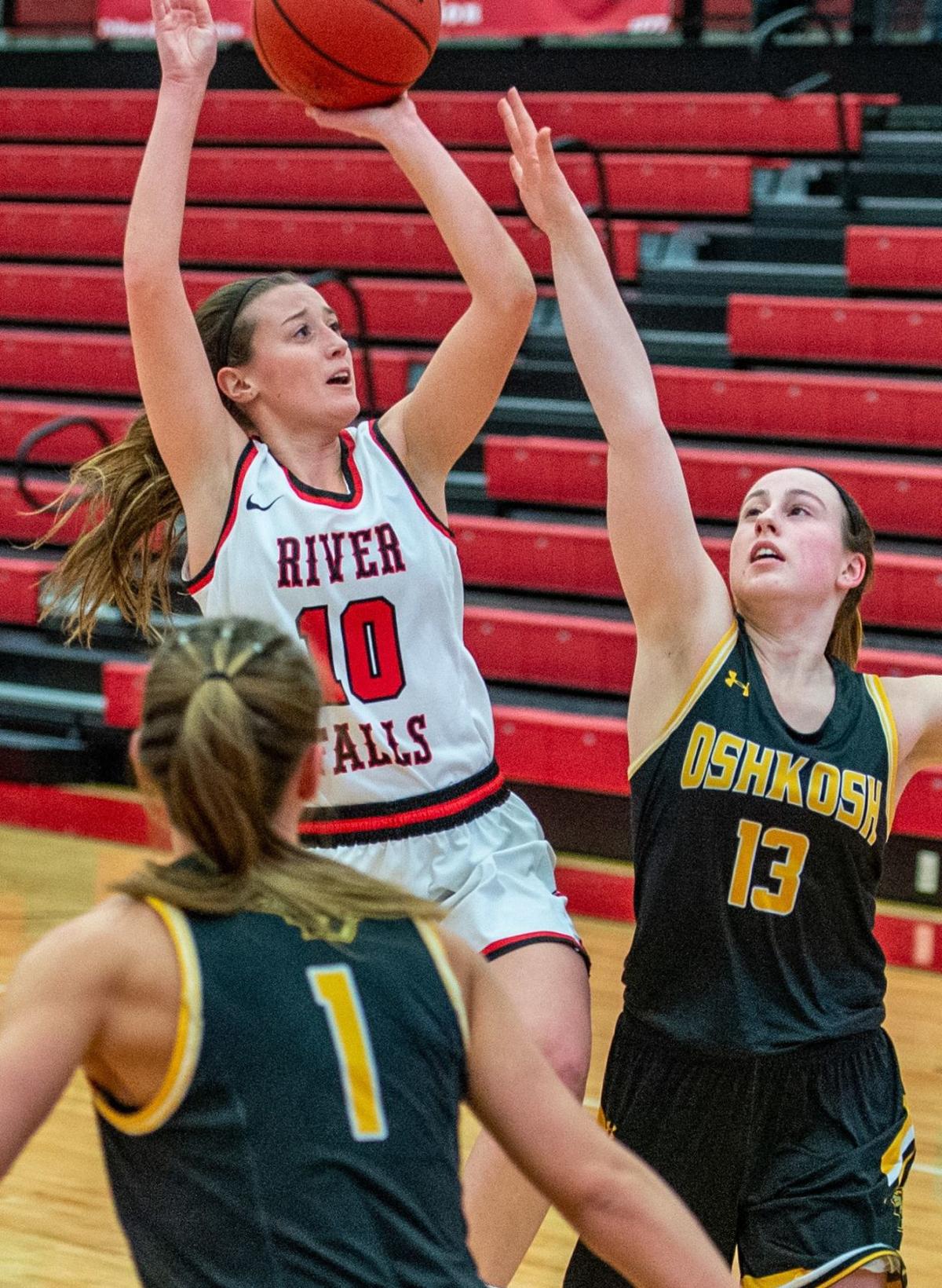 Eau Claire North graduate Haley DeSouza takes a shot for UW-River Falls during a game against UW-Oshkosh on Jan. 18 in River Falls. 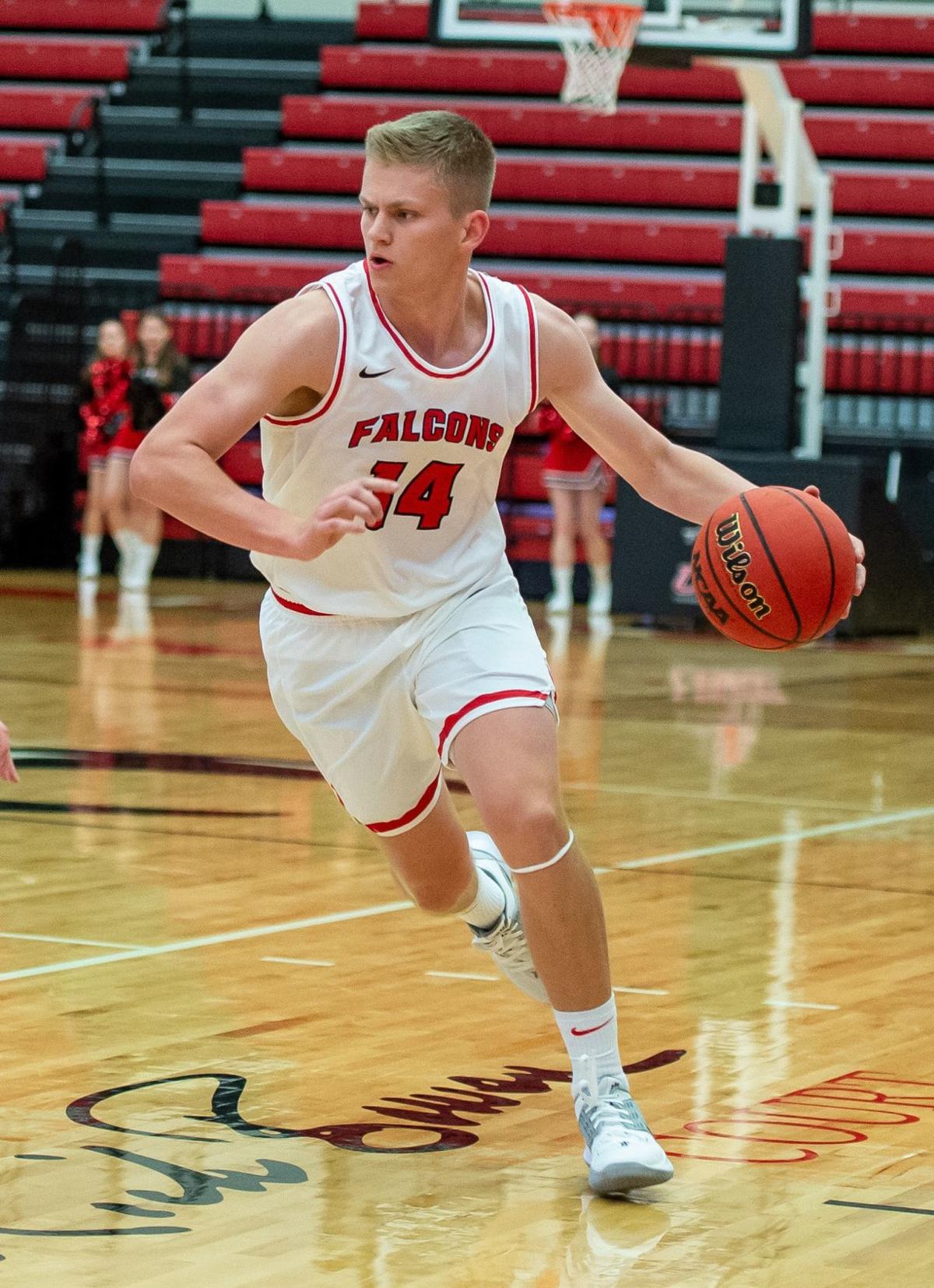 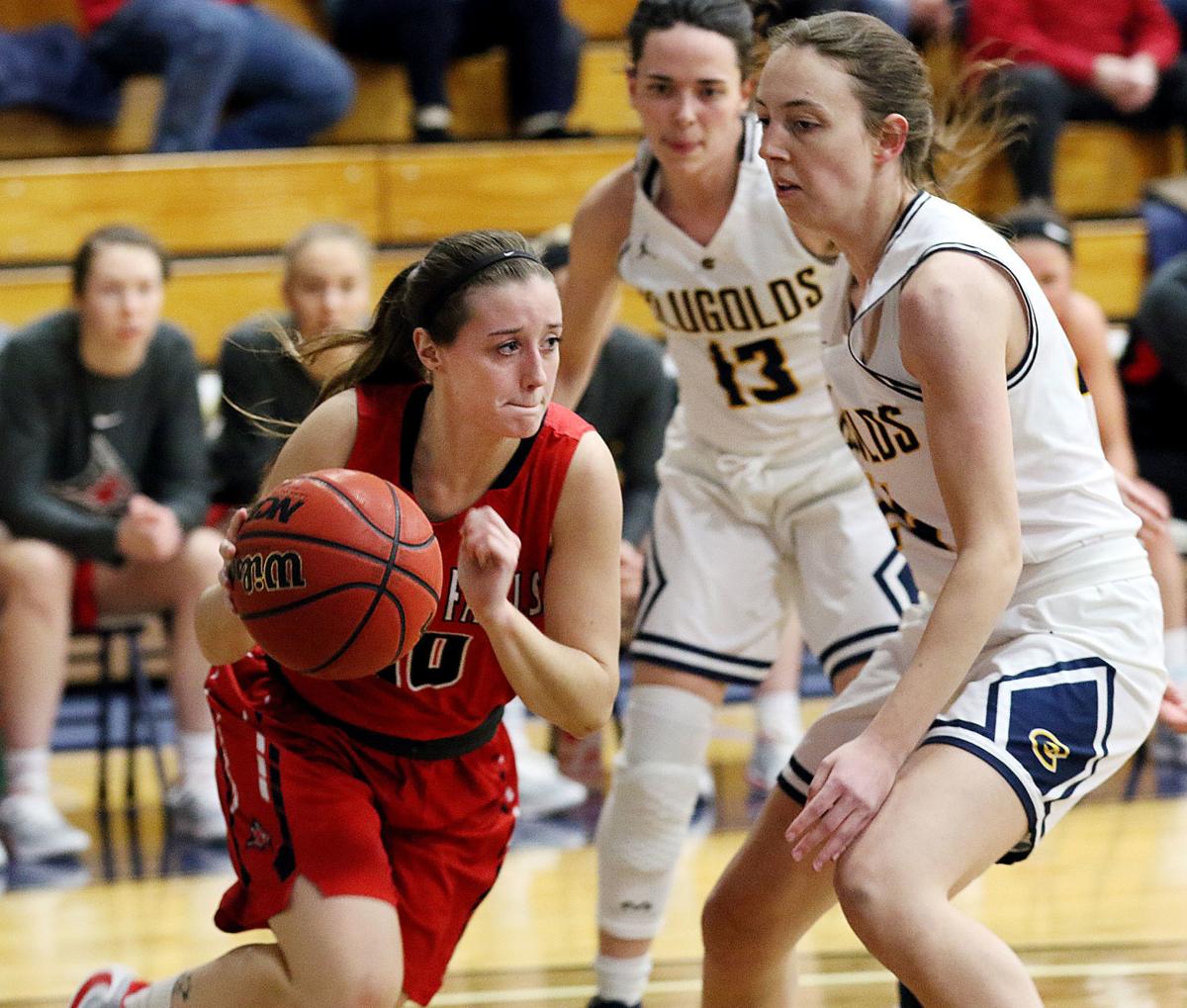 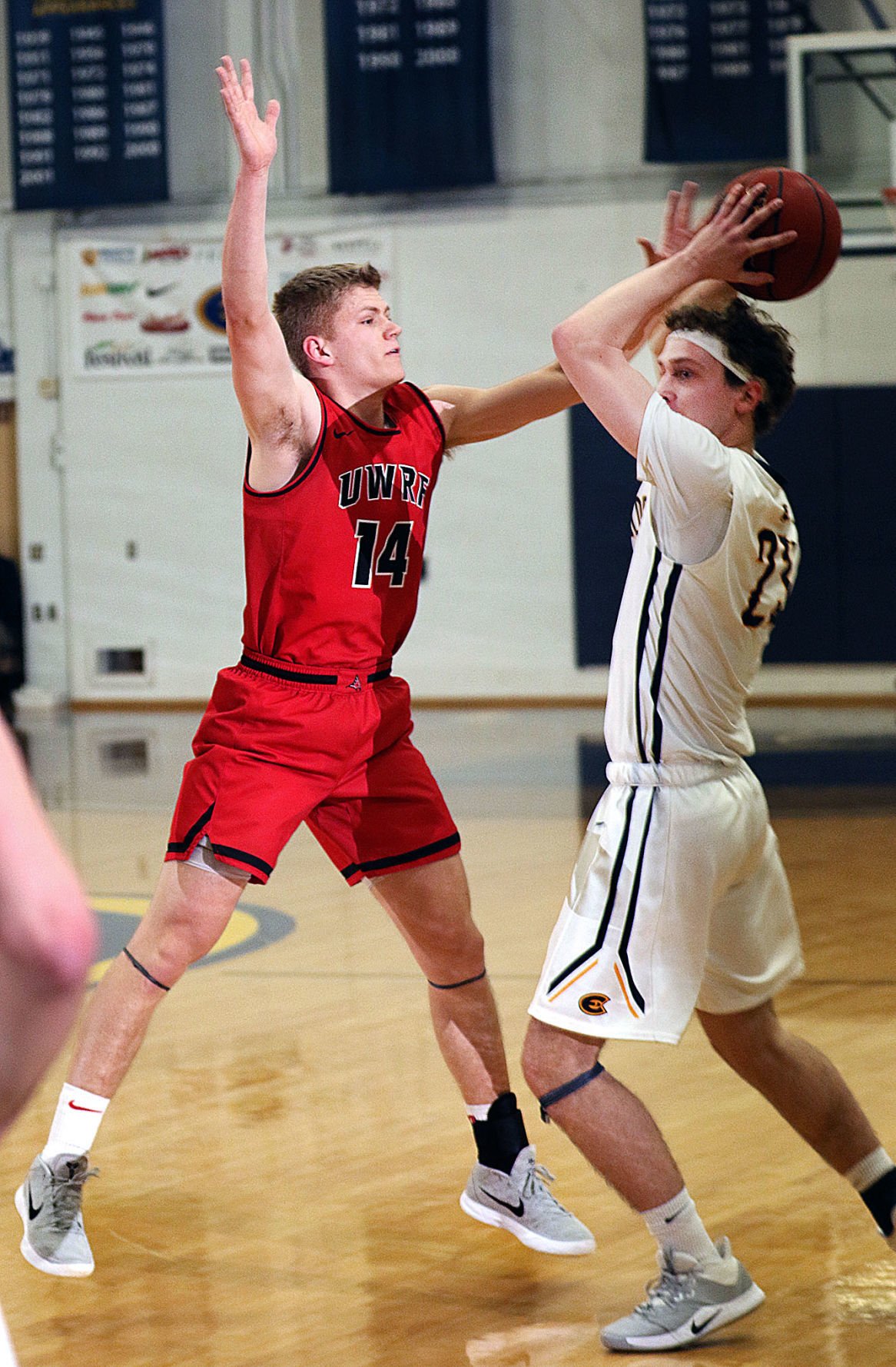 Eau Claire North graduate Haley DeSouza takes a shot for UW-River Falls during a game against UW-Oshkosh on Jan. 18 in River Falls.

Any given game played at Page Arena in River Falls might have a familiar feel for fans of Eau Claire North basketball.

Check out a men’s game, and two players clad in red and white will be friendly faces. Pop in for a women’s contest, and you can add another to the list.

In recent years, the UW-River Falls basketball programs have become a common home for former Huskies. North graduates Austin Werdin and Noah Hanson both started for the men’s team this winter, and fellow alum Haley DeSouza saw significant court time with the women.

“It just shows for us, with Austin’s class a year ahead of us and then Haley and I the next year, our classes kind of paved the way for younger generations,” Hanson said, “to show that if you put time and effort in, you can really do some special things.”

Werdin graduated in 2017, while DeSouza and Hanson followed in 2018.

It hasn’t taken any of them too long to make an impact at the college level with the Falcons. Hanson, a 6-foot-3 guard, averaged 11 points and 4.5 rebounds this season, while Werdin, a 6-foot-5 forward, added 8.2 points and 4.4 rebounds per contest. Both started 23 games.

Each credited their experience with North basketball for helping them get to this level.

“Obviously we’ve had some great coaches at North, both men’s and women’s,” DeSouza said. “(Former North girls coach Michelle Peplinski) has taught me a lot, even growing up in the youth years too. She not only told me the skills I needed to work on and improve on over the years, but she also taught me how important it is to know the game of basketball itself.”

Same goes for the men.

“(North boys) coach (Todd) Marks did a great job with us,” Werdin said. “It’s especially shown over the last three years or so, with all the conference championships and everything. He’s done a great job of making sure everyone knows what to expect and having high standards.”

All three players were sophomores with the Falcons this year, despite Werdin graduating a year earlier. He sat out his first year on campus due to knee injury.

He still found a way to contribute for the Falcons that season, helping fill Hanson in about the program while he was deciding where he wanted to play in college.

“I would text him and he’d text back about how things were going, seeing if there was anything he could do to help,” Hanson said. “He was just a good friend, and he would’ve been happy for me no matter where I went. But we ended up on the same team.”

And now the two, who were North’s top two scorers when the Huskies won the Big Rivers title in the 2016-17 season, are back at it again.

“I definitely feel like we’re closer than some of our other teammates, just because we’ve known each other a lot longer,” Werdin said. “It’s just fun to experience this with a high school teammate.”

Each of the former Huskies made a jump in playing time last winter. None of them started as freshmen, or even saw significant minutes off the bench.

But now they’re all making an impact with the Falcons.

“I was just continuously working, I would do extra reps on my own,” DeSouza said. “I wanted to take the initiative and let (the coaches) know that I wanted to continue to improve so that I could see more time on the floor.”

And for Werdin and Hanson, it’s just like being back out there at the Doghouse.

“It’s just like how it used to be in high school,” Hanson said. “We know each other’s games, our strengths and weaknesses. I feel like we click really well.”