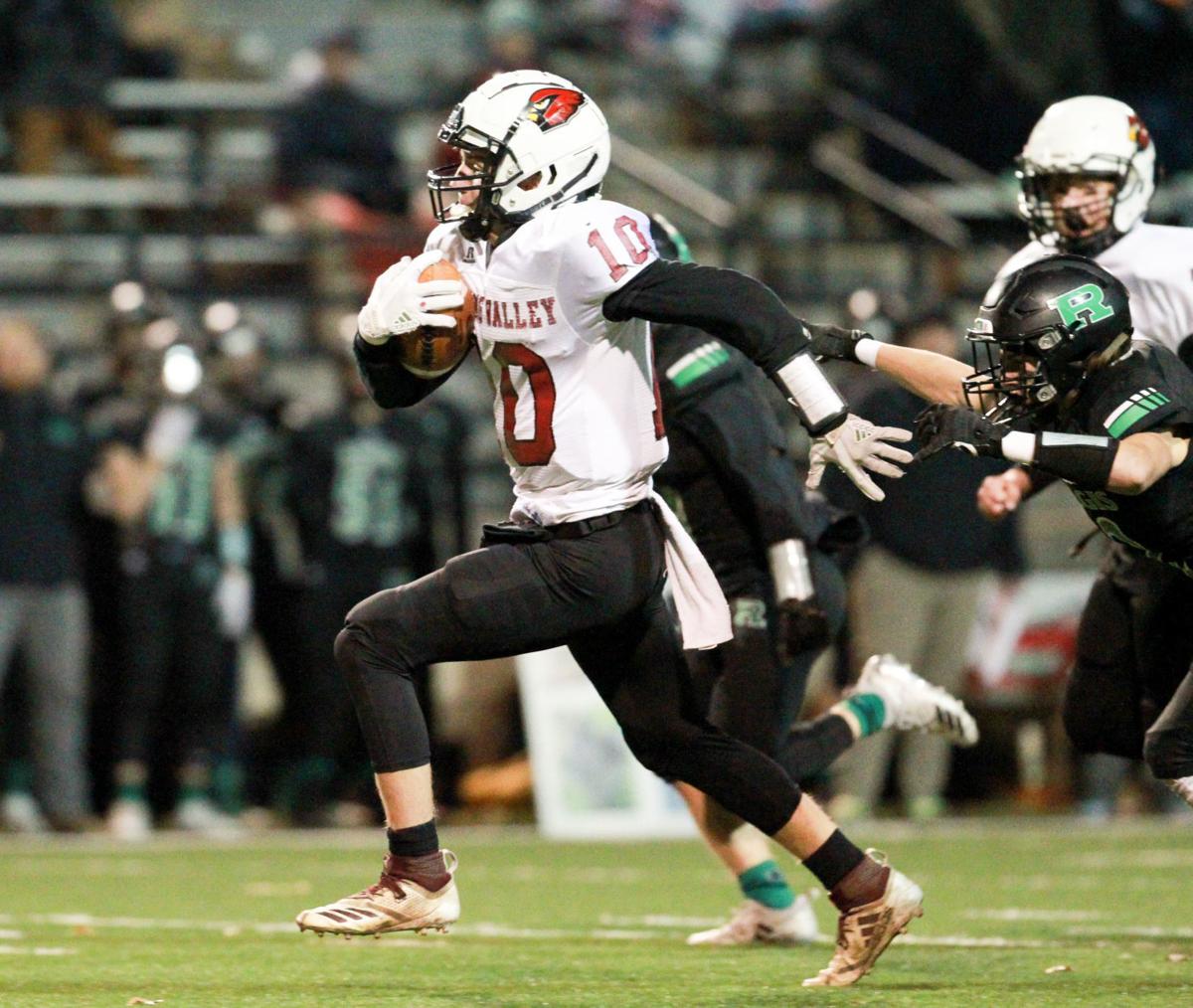 Spring Valley’s Aaron Borgerding breaks free against the Regis defense during a Level 3 matchup at Carson Park on Friday, Nov. 8, 2019. 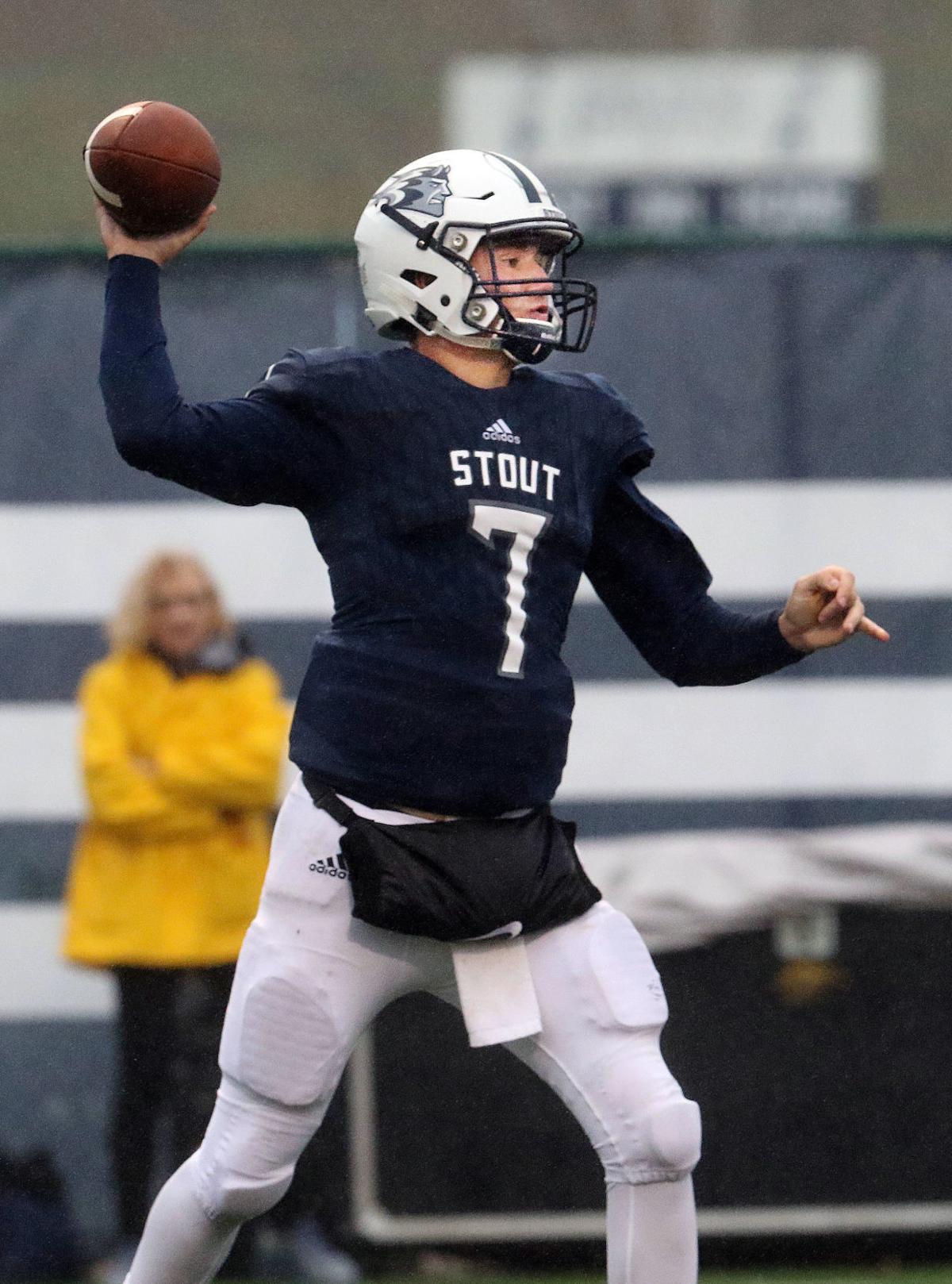 Spring Valley’s Aaron Borgerding breaks free against the Regis defense during a Level 3 matchup at Carson Park on Friday, Nov. 8, 2019.

The Borgerding household will be divided when the WIAC football slate rolls around the next two years. Sean predicted his parents may split allegiances in a way, with one rocking UW-Stout gear and the other UW-River Falls.

That’s thanks to his younger brother Aaron’s college decision, which was made in February but officially announced by UW-River Falls last week. Aaron, who graduates from Spring Valley as the Dunn-St. Croix’s reigning offensive and defensive player of the year, decided to travel 20 miles west to suit up for the Falcons. With both Borgerdings opting for the WIAC, a potential future battle between the brothers and former Cardinal QBs is possible.

Aaron would need to earn the starting role as an underclassmen for the duo to directly compete against one another considering Sean is entering his junior year. But even if Aaron is watching from the sidelines, the talented pair will still look across the field and see a familiar face.

Sean concurs. While competition between the brothers is nothing new after years of backyard battles, this will be a whole new ball game.

“To be in a potential game-type atmosphere competing against him, I think is something that would be pretty special and never really happened before,” Sean said.

As a quarterback, Aaron accounted for 28 total touchdowns, threw for 610 yards and ran for 1,220 yards in his senior year at Spring Valley. He earned all-region and all-state honorable mention honors for his play at the position and led the Cardinals to Level 3 of the Division 6 playoffs.

But he was far from a one-trick pony, also shining at defensive back and kicker. While in the secondary, he recorded 63 tackles, including one for loss, and also forced a fumble, blocked a kick and snagged three interceptions.

As a kicker, he made 90% of his PATs and hit on his only field goal attempt.

“Aaron is everything you want in a football player,” Spring Valley coach Ryan Kapping said after the season. “He is athletic, tough, intelligent and a natural leader. … When talking about the best players in our part of the state, Aaron is in that discussion.”

Understandably, there were college programs interested in Aaron as a defensive prospect. That includes Division II Minnesota-Duluth, one of the final three schools he picked between, and a handful of other DII programs according to Aaron.

“I had a lot of interest from schools for me to come play defense,” Borgerding said. “That was kind of determining of where I went, what people wanted me for what position. That was a tough decision, but I always wanted to be QB since I was little. I knew I probably wanted to play offense.”

The Falcons saw Borgerding as a fit under center, adding the former Cardinal to a recruiting class UW-River Falls coach Matt Walker calls the most talented and exciting group he’s assembled.

“He is such a great athlete and can do it all at the quarterback position,” Walker said in an email. “Great accuracy, strong arm to throw it downfield, good on the move, great runner, and as tough as any quarterback we have recruited.”

UW-River Falls needs to replace quarterback Ben Beckman, an All-WIAC honorable mention selection who bombed away for a league-leading 3,105 passing yards. His 3,408 yards of total offense also led the conference.

“Aaron reminds me a lot of Ben out of high school and he is built to be successful in our unique offense,” Walker said.

UW-Stout also made Aaron’s final cut, giving him a chance to continue his family’s tradition at the school. In addition to Sean’s time with the Blue Devils, which has already included a pair of seasons as UW-Stout’s starting QB, Aaron’s grandfather Bob Thomas previously spent time at the school as an assistant coach following his stellar stint leading the Spring Valley program.

And while Sean admits he did a bit of recruiting, he wanted Aaron to pick the landing spot he felt was best.

“I wasn’t going to push him to do something that he didn’t feel (was) right,” Sean said. “Ultimately, and I told him this, it’s his choice. He has to do what feels the best for him, what he feels his best fit is.”

Aaron said he got a good feel for the UW-River Falls campus on his visit and quickly found an academic fit.

“I’m going into human health performance and my end goal is to become an athletic director,” Aaron said. “That was offered there and they have a really good program.”

So the Borgerding brothers will be competitors after all, though they’re getting some extra time to work out together and throw with each other in the backyard due to the coronavirus pandemic.

“It kind of feels like the old days, working out with each other again,” Sean said.

But soon, they’ll each be rocking different colors.