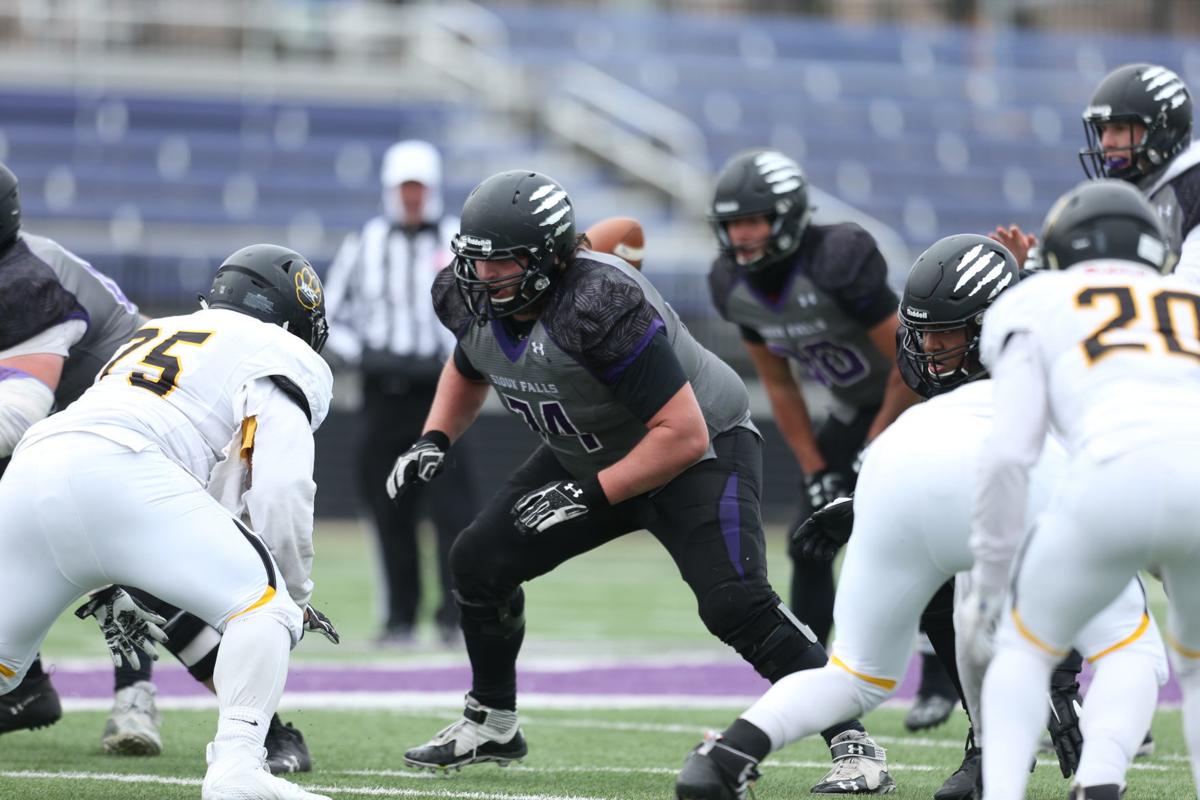 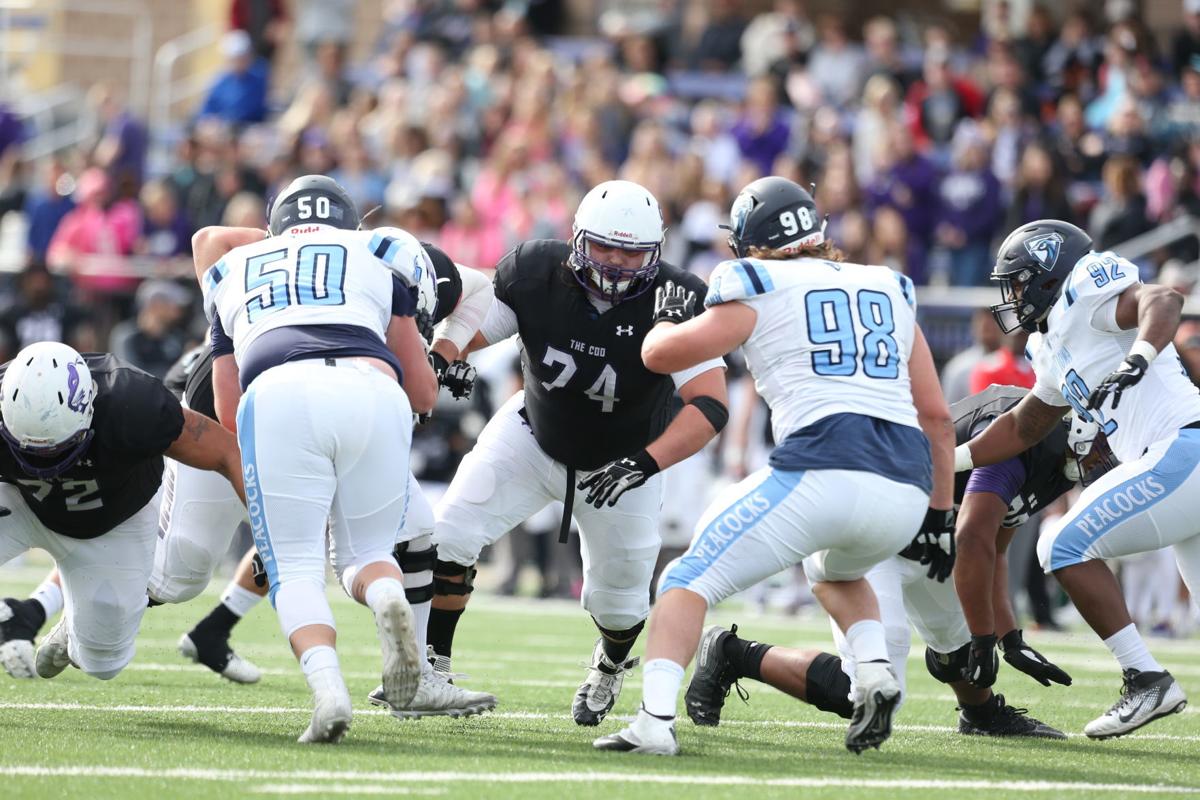 It takes a great deal of legwork to make a name for yourself prior to the National Football League Draft when coming out of a small school.

Showcases are the name of the game for the under-the-radar draftee, with every chance at getting in front of front office officials being of the upmost importance.

For Regis graduate Nolan Kern, that process is currently on pause.

The NFL has banned travel due to the coronavirus, even as the league year started with a busy first few days of free agency. The scouts are staying home, bringing an end to traditional opportunities for prospects to show off their skills.

That means Kern, an offensive guard out of Division II University of Sioux Falls, and his agent, fellow Eau Claire native Jordan Hagedorn, have had to get a little creative. They’ll be conducting a virtual pro day, sending video of him running through drills to teams across the country.

“Obviously not getting invited to the combine, the pro day is where you show what you can do,” Kern said. “We’re going to film everything and send it out to the teams. Hopefully that replaces it. But it’s been tough losing that pro day opportunity.”

Thankfully for Kern, he’s not an unknown among scouts after utilizing the first few months of the offseason.

The Eau Claire native first attended the National Bowl, a showcase of the top players from non-FBS schools, in Daytona Beach, Fla., in December. The Athletic’s Emory Hunt singled Kern out in his scouting recap of that event, listing him among the top three offensive line performers for the week.

In January, Kern was able to get in front of NFL teams again when he attended the College Gridiron Showcase in Fort Worth, Texas.

In high school, Kern was a four-time All-Cloverbelt selection, four-time All-City pick and a three-time All-Northwest honoree while playing both sides of the line for the Ramblers. He said he had multiple opportunities to walk on at Division I schools, but decided the best path was to go somewhere he could receive a scholarship.

“Being a D2 guy, you always feel like you’re underrated,” Kern said. “Coming out of high school, I always felt I could compete with any guy at any Division I school.”

Instead he opted for Sioux Falls, where he developed into a first team All-Northern Sun Intercollegiate Conference selection. He’s not the tallest lineman you’ll ever run into, standing at 6-foot-4, but he makes up for that with strength.

“We loved having him on our team and I’m sure most people didn’t like going against him on Saturdays,” Sioux Falls coach Jon Anderson said.

Watch his senior year highlight tape, which he has pinned to the top of his Twitter profile, and you see he certainly doesn’t shy away from contact.

“Physical, that’s the best word to describe my game,” Kern said. “I’m not afraid to throw my body in there. I like to drive guys. I like to finish guys. I produce a ton of power at the point of attack.”

It’s still tough to get a secure position in the NFL coming out of a Division II program when you do everything right through this process. But there is precedent for Kern from his alma mater.

Fellow offensive lineman Trey Pepkins was drafted out of USF just last year, getting snagged by the Los Angeles Chargers in the third round. He played in 13 games in his rookie season, starting in three.

“I feel really confident,” Kern said. “I think through those opportunities I feel like I’ve shown I can compete with anyone in the nation. I’m not one of those DII guys that looks really good at DII and as soon as they play better competition can’t handle it.”

If the NFL doesn’t work out, Kern said he’d be open to exploring other football options like the Canadian Football League or the XFL. According to him, he’s gotten quite a bit of interest from CFL teams and had workouts scheduled before coronavirus brought the sports world to a halt.

Kern has another great backup plan too if football entirely is ruled out. He was a pre-law major at Sioux Falls, setting up a future career as a lawyer.

“He’s kind of an enigma,” Anderson said. “He’s probably one of the most physical players on the football field that I’ve ever been around. Off the field he’s extremely quiet, a great teammate, but also a guy that scored in the 90th percentile on the LSAT and has law school in front of him if he desires that. There’s kind of a contradictory thing about that.”

Kern said that switch, where he’s able to go from quiet nice guy off the field to a monster on it came from competitions with his younger brother, current Golden Gopher football player Jack Kern, and his dad Richard, who also played college ball.

“If we’re playing pickup basketball in the driveway, you’ve got to be nice to them outside of it, but when you’re playing if you want to survive in that environment you better turn it on,” Kern said.

Kern said he hopes to chase his dream of professional football for at least a couple of years. When he hangs up the cleats, he’ll start hitting the books.

“(He) really completely embodies what Eau Claire stands for,” said Hagedorn, who was taught in middle school by Kern’s mother, Susan. “Grit and hard work and that pursuit, that’s why we connected.”

Kern is back in his hometown after all the facilities closed in Sioux Falls, hoping to stay in peak shape. He and Hagedorn plan on shooting the pro day video sometime in the next two weeks. Then, it’s a waiting game leading up to the draft, currently scheduled for April 23 through 25.

“Hopefully the filming and sending it out to the teams will still turn heads,” Kern said.