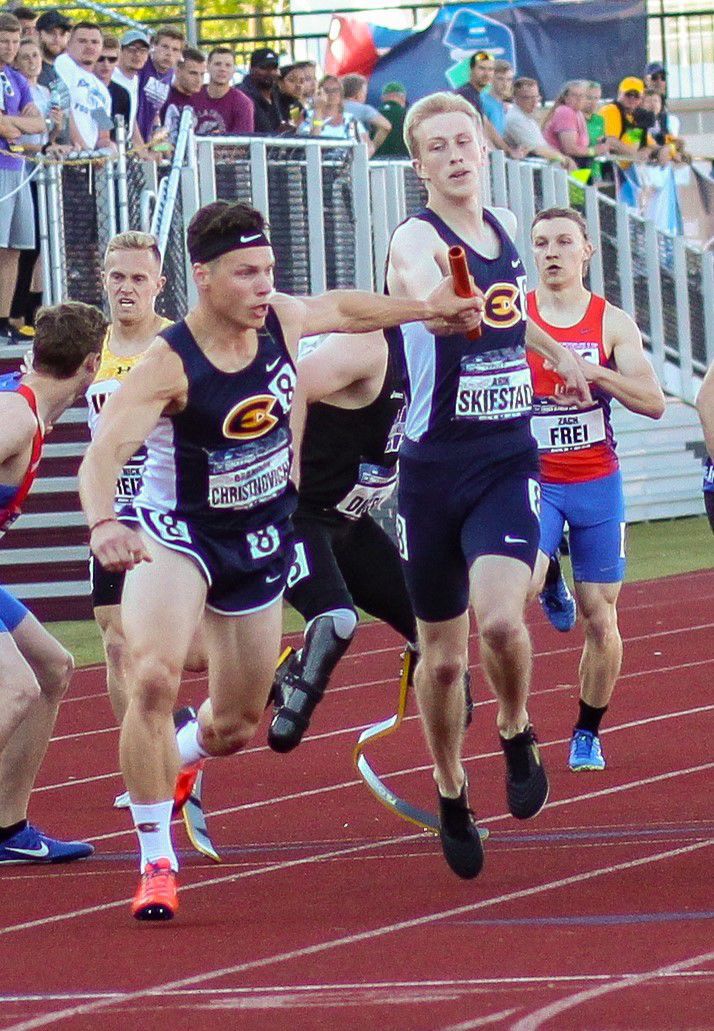 UW-Eau Claire’s Arik Skifstad, right, hands off the baton during an event at the 2019 NCAA Division III outdoor national championships in Geneva, Ohio. 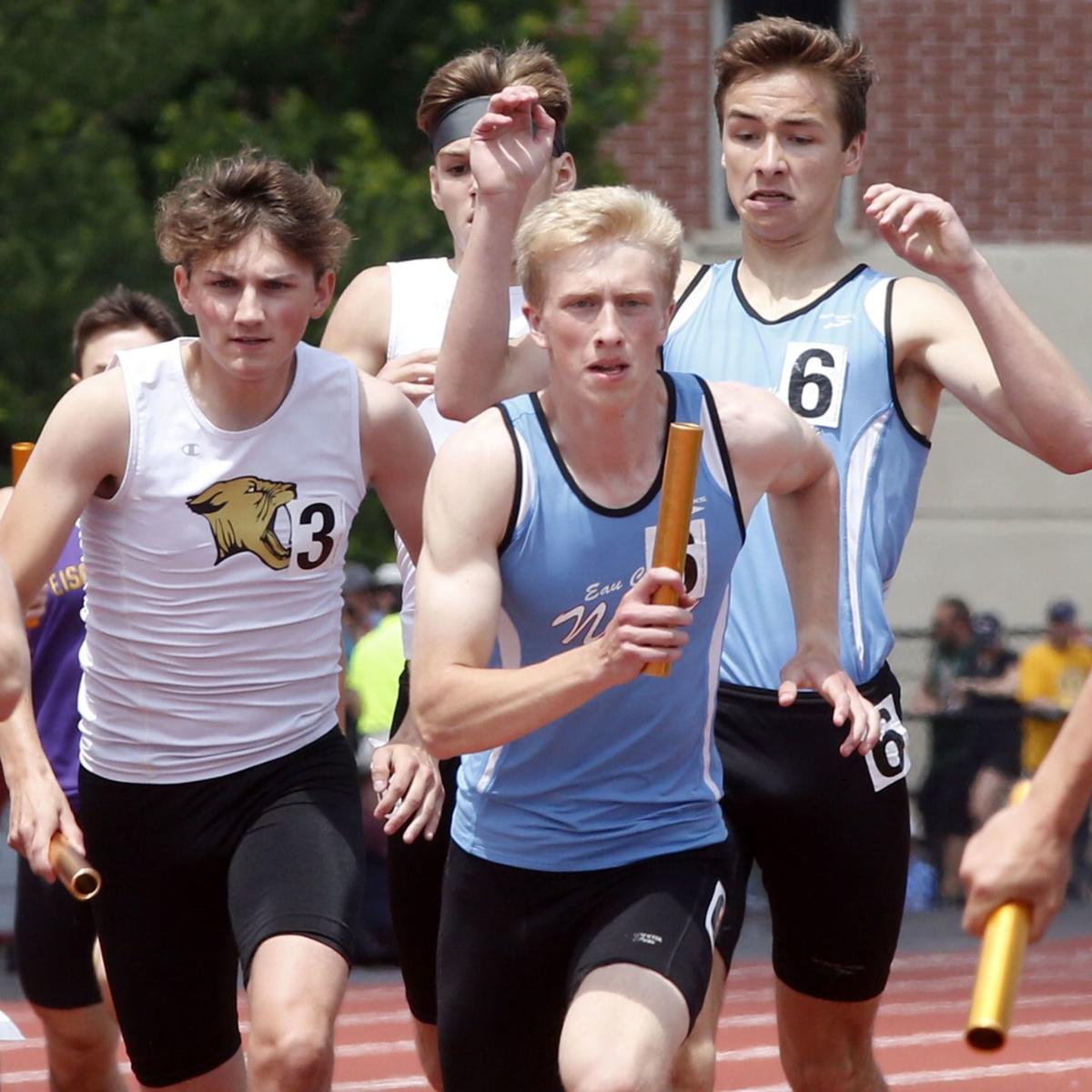 Eau Claire North’s Arik Skifstad sprints away from relay teammate Jason Voelker to start the anchor leg of the Division 1 1,600 meter relay on June 1, 2018 at the WIAA track and field state championships in La Crosse.

UW-Eau Claire’s Arik Skifstad, right, hands off the baton during an event at the 2019 NCAA Division III outdoor national championships in Geneva, Ohio.

Eau Claire North’s Arik Skifstad sprints away from relay teammate Jason Voelker to start the anchor leg of the Division 1 1,600 meter relay on June 1, 2018 at the WIAA track and field state championships in La Crosse.

Chip Schneider knew his team would be getting a boost.

The head coach for the UW-Eau Claire track and field team had a local high school standout coming into the mix in 2019, and he wasn’t shy about his expectations for the freshman.

Arik Skifstad took fourth place in the Division 1 200-meter at the WIAA state championships as a senior at Eau Claire North, and his name is in the record book five times for the Huskies.

And he kept his talents in the Chippewa Valley at the college level.

“We had pretty high hopes for Arik coming in as a freshman,” Schneider said. “We knew based on what he had done in high school that he definitely had the ability to come in as a freshman and make a difference.”

That prediction turned out to be right on the nose: Skifstad worked his way onto the Blugolds’ 4x400-meter relay team midway through his freshman indoor campaign, and eventually helped the unit score points at the NCAA outdoor championships as Eau Claire won the team national title.

When he first stepped foot on campus, Skifstad didn’t even think he would run 400s, let alone do so for a relay team which would become WIAC champion and finish fourth in Division III.

“When I heard that I was going to be on the 4x400, I kind of started freaking out because I had no intention of doing that before,” Skifstad said. “Obviously it was a goal at some point, because the 4x400 is kind of the big race for sprinters, but I didn’t think I was going to be able to get there, especially as a freshman. But then watching everything play out and being able to keep my spot, improve myself and see my team improve ... it blew me away.”

Most athletes never get to experience winning a national championship. Skifstad checked that one off the list right away, and he’s aware of the rare company he’s in.

“As a freshman you just kind of figure out what you’re doing,” Skifstad said. “To be able to figure out how to win a national title as a freshman was extremely shocking, and I’m so grateful to have had that team.”

His encore performance as a sophomore was on pace to be another standout one before the season was ended prematurely in the face of the coronavirus. Skifstad was a Division III All-American in the distance medley relay this indoor season, which was called off just before the NCAA championships were set to begin.

Skifstad qualified for nationals and was set to be part of the Blugolds’ 4x400 squad. He said they were expecting to bring home a national title in the event.

But the pursuit of a championship in the event and a second straight team outdoor championship will need to wait.

“Getting the news that evening (that the meet was canceled) was very shocking,” Skifstad said. “It took so long to really soak in that information.”

As just a sophomore this year, Skifstad has a few more opportunities ahead of him to hit more of his goals with the Blugolds. And Schneider is excited to see what he’s capable of as he continues to improve.

“He’s very talented. And although he’s really, really good, he’s still figuring out how good he is, believe it or not,” Schneider said. “A lot of times that you get sprinters that are this fast coming out of high school, they’re cocky and arrogant in the sense that they know they’re really good. Arik’s almost the opposite, you almost have to convince him sometimes that he’s really good.

“I think the next step for him is to realize that he’s not just a relay guy, he can be the guy to do it on his own too. Because he’s ready to do that as well.”

During this indoor season, Skifstad secured a pair of runner-up finishes in the 200-meter at the first two meets of the year. As a member of this season’s 4x400 team, he helped the relay earn wins at two meets.

He was hoping that he’d have been spending this week celebrating another outdoor national title — the championships were supposed to be held from May 21-23 — but instead he’s left with the sobering reality that athletes across the globe face.

“It really hit me when I realized that my teammates might never be able to run again (for the team),” Skifstad said. “That’s what moved me a lot. They spent all this time putting in work, poured their life into this program, and it got taken from them. ... Everything leads up to your senior season, and it was just so heartbreaking. I don’t know how I’d react if I was one of them.”

Sentiments like that are what led his teammates elect him to be a captain for next year’s team.

And for his part, Schneider is glad to have somebody like Skifstad around.

“In just two years, he’s gone from somebody who feels like he’s riding the coattails of his teammates to somebody who is now wanting to be a leader,” Schneider said. “Now he’s the guy pushing other people as opposed to wanting other people to push him. The growth in leadership is the biggest thing I’ve seen in Arik during his first two years.”