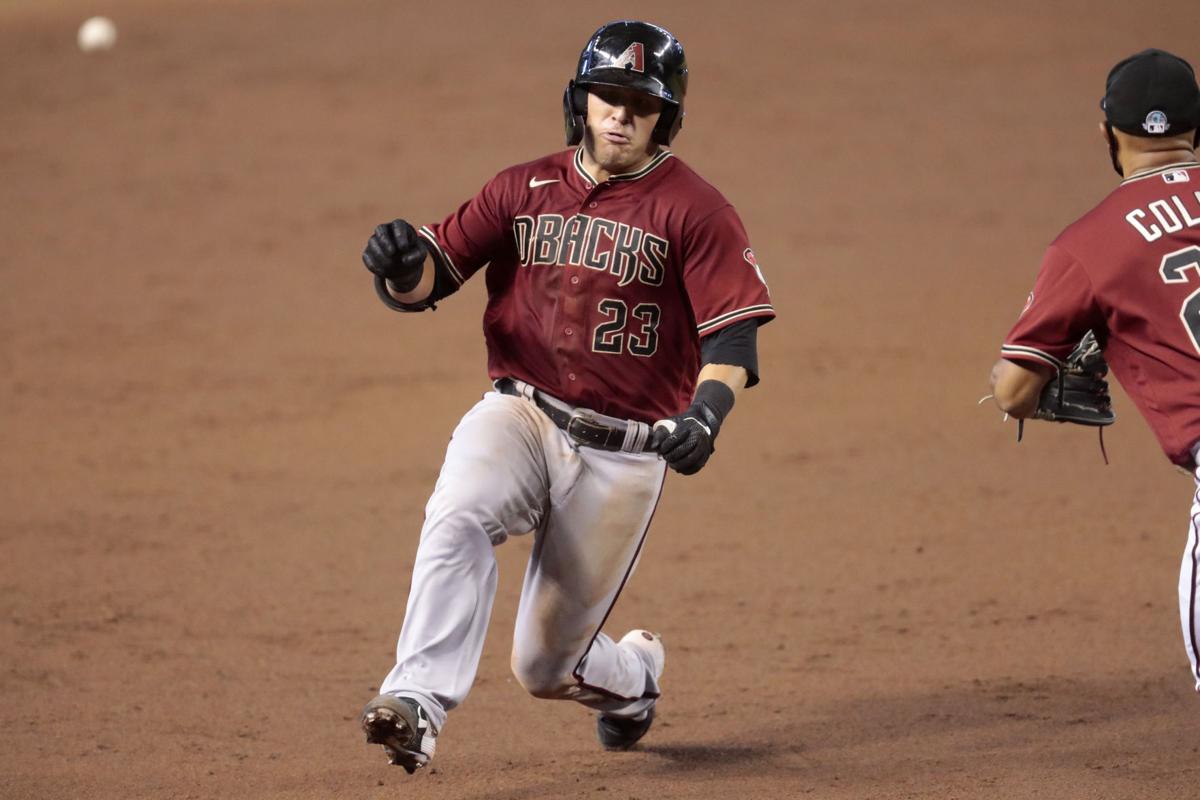 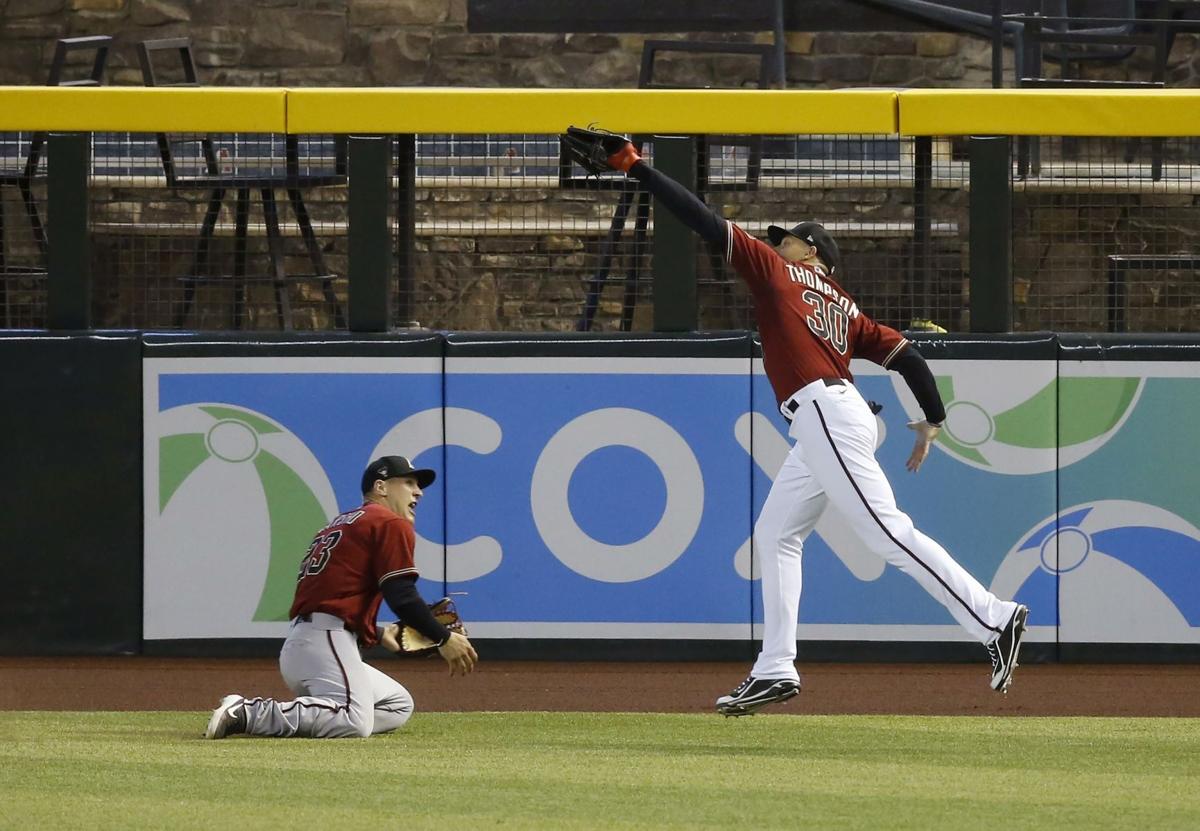 Arizona Diamondbacks right fielder Trayce Thompson (30) reaches up to make a catch on a fly ball hit by Tim Locastro as center fielder Daulton Varsho (23) slides out of the way during a training camp intrasquad scrimmage Sunday, July 12 in Phoenix. 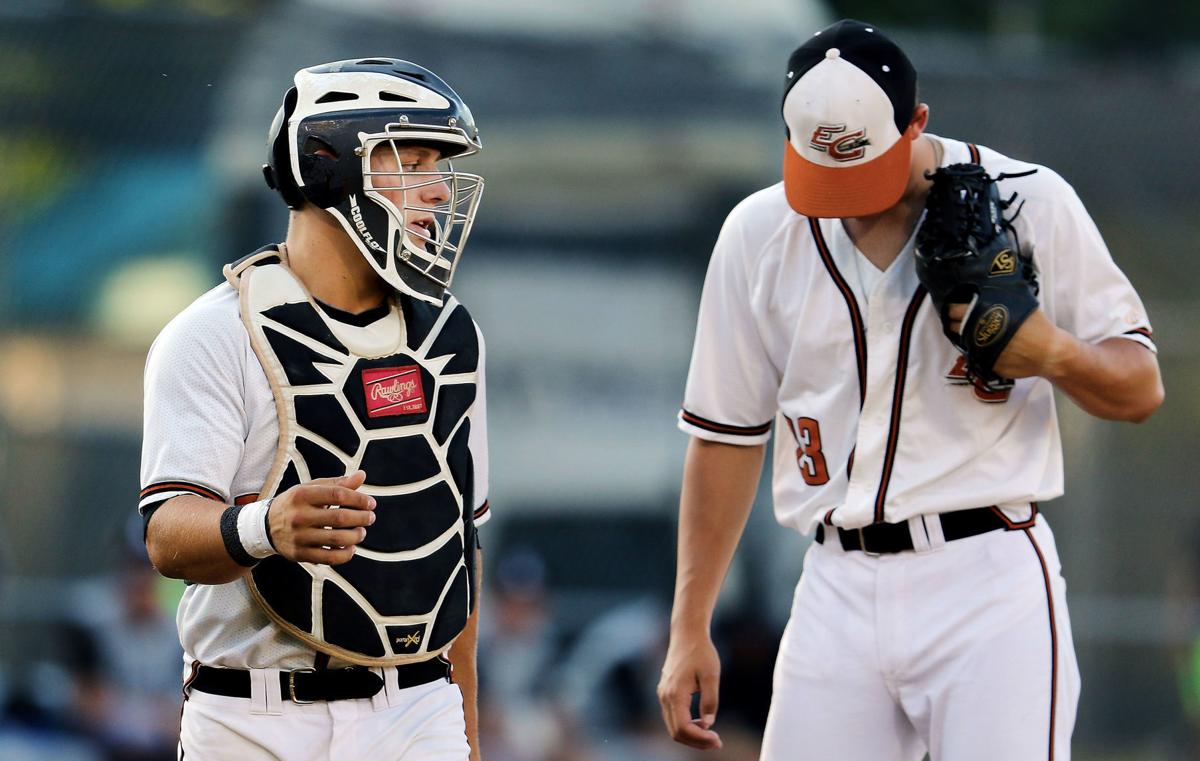 Daulton Varsho meets on the mound with pitcher Kenny Ogg during a July 15, 2016 game against the La Crosse Loggers at Carson Park. 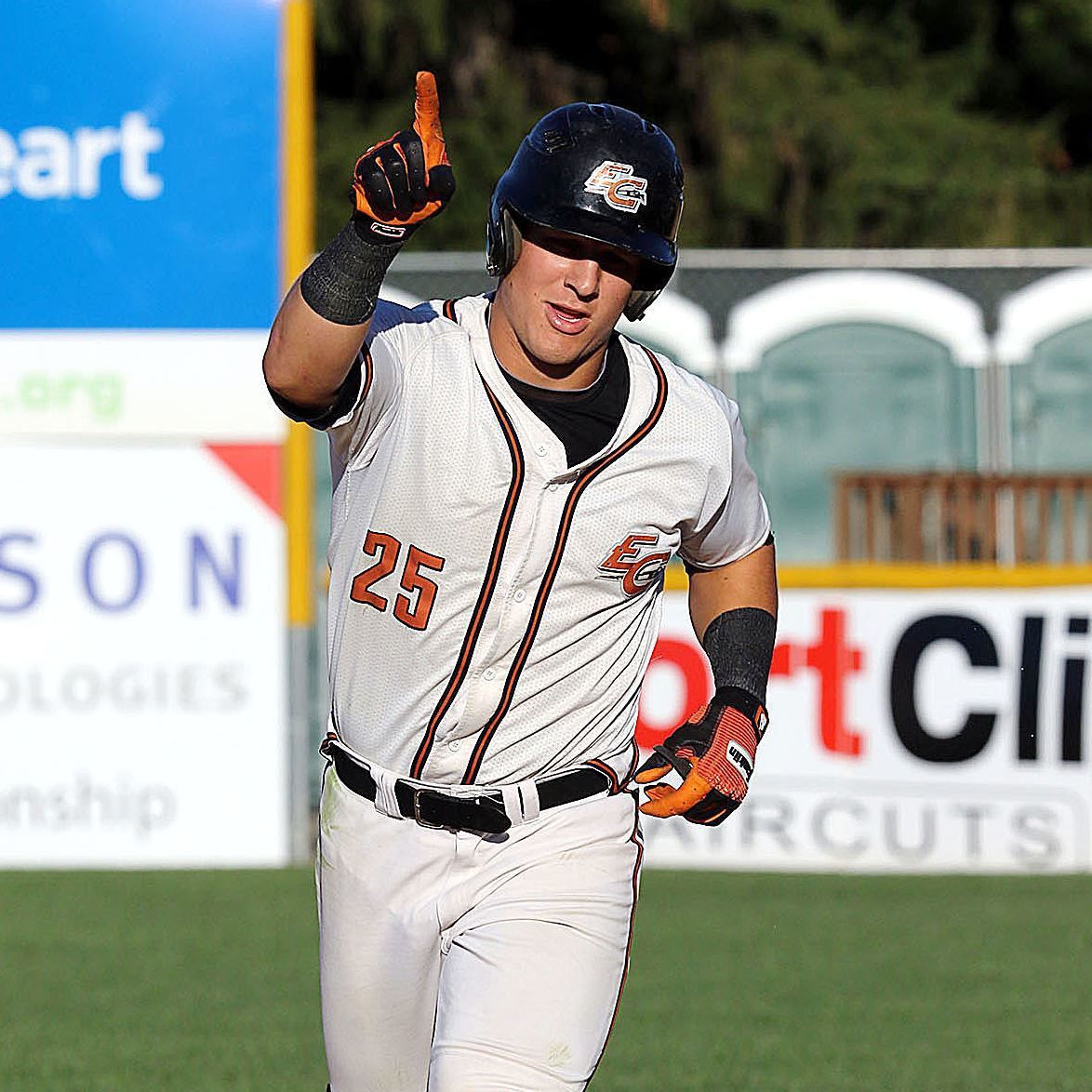 Daulton Varsho rounds the bases while with the Eau Claire Express after hitting a fifth inning solo home-run Sunday, Aug. 14, 2016 at Carson Park. 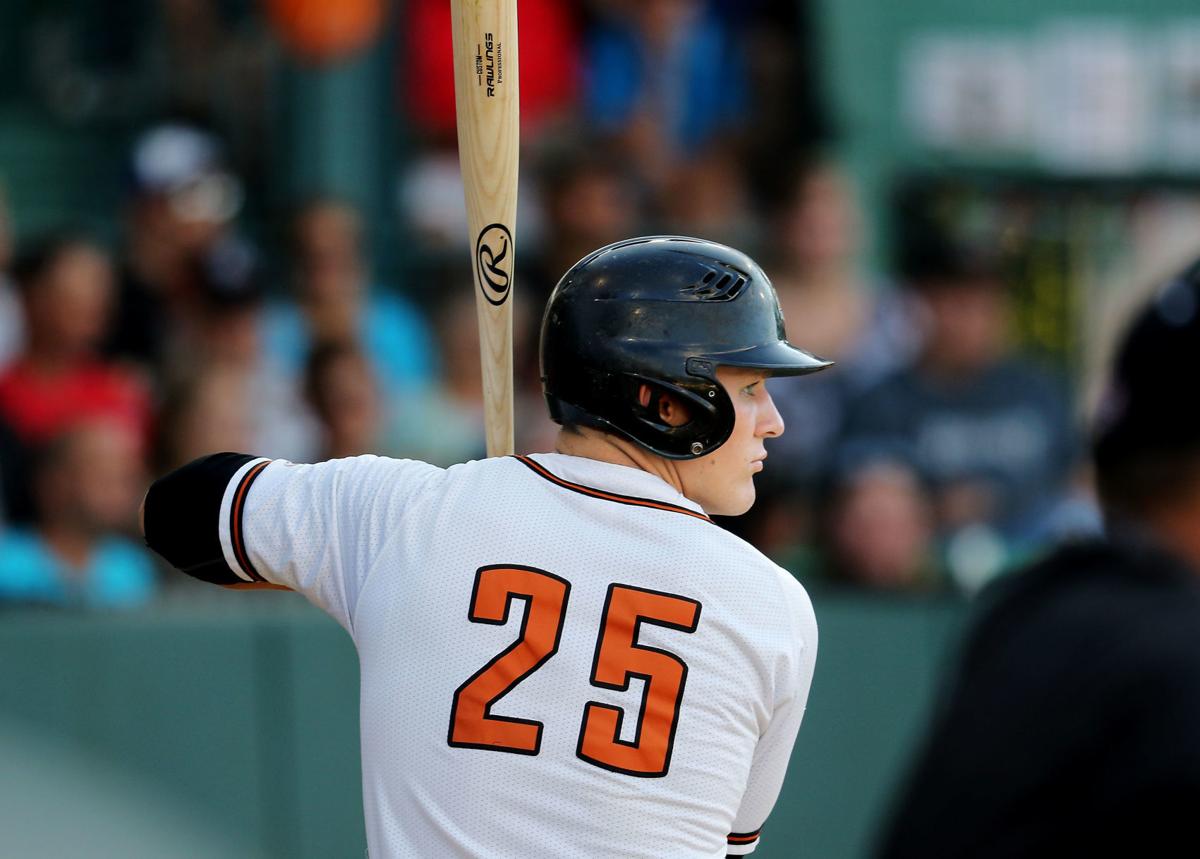 Daulton Varsho waits on deck to bat during a game against the La Crosse Loggers on Friday, July 15, 2016. 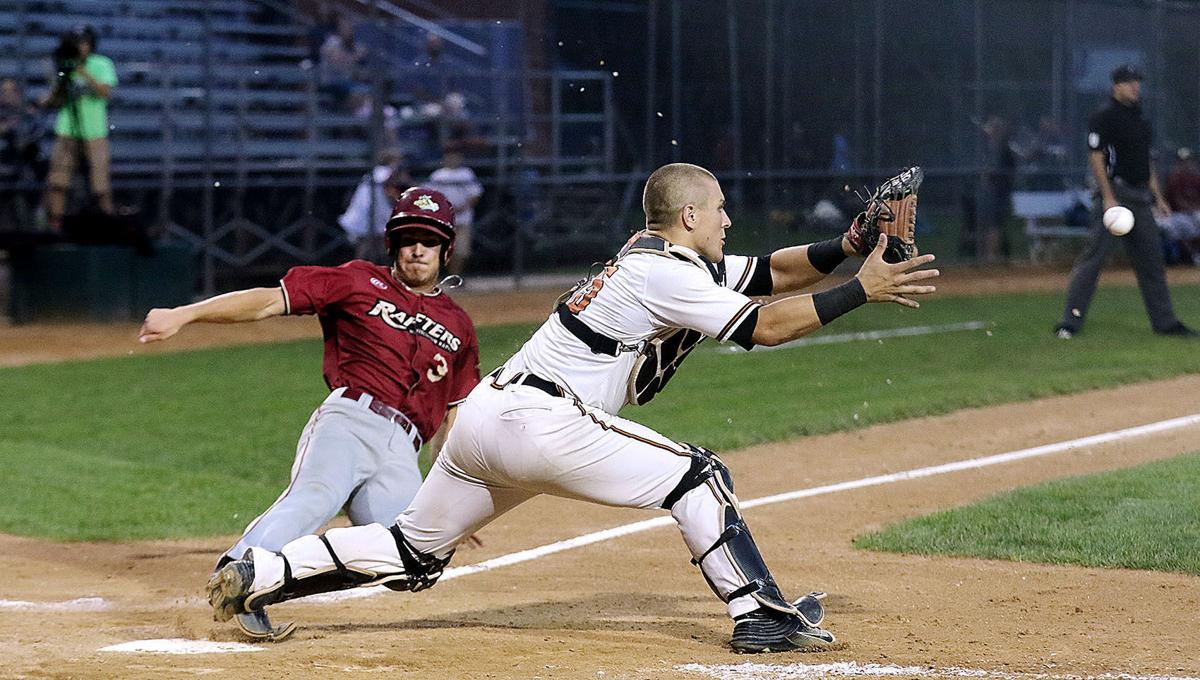 Arizona Diamondbacks right fielder Trayce Thompson (30) reaches up to make a catch on a fly ball hit by Tim Locastro as center fielder Daulton Varsho (23) slides out of the way during a training camp intrasquad scrimmage Sunday, July 12 in Phoenix.

Daulton Varsho meets on the mound with pitcher Kenny Ogg during a July 15, 2016 game against the La Crosse Loggers at Carson Park.

Daulton Varsho rounds the bases while with the Eau Claire Express after hitting a fifth inning solo home-run Sunday, Aug. 14, 2016 at Carson Park.

Daulton Varsho waits on deck to bat during a game against the La Crosse Loggers on Friday, July 15, 2016.

Daulton Varsho is starting the season on the outside looking in when it comes to the Arizona Diamondbacks’ 30-man roster. That shouldn’t last long.

The former Eau Claire Express star is coming off a stellar year in Double-A, one in which he hit .343 in the second half and earned the distinction of Diamondbacks Minor League Player of the Year from Baseball America. Baseball America also ranks him as the top prospect in the Diamondbacks’ system, while Major League Baseball’s rankings have him third. Entering this year, MLB’s experts have him slotted in as the ninth best catching prospect in all of baseball.

In a normal season, he’d likely be playing in Reno with the Triple-A Aces right now, getting more professional seasoning while sitting behind the likes of Carson Kelly and Stephen Vogt. Instead, he’s in Arizona with the D-Backs’ satellite roster, biding his time until his eventual shot in the Show.

“I kind of figured that’s where I would probably start,” Varsho said in a phone interview with the Leader-Telegram earlier this week. “I hope I just get an opportunity this year. That’s all I’m asking for.”

With the start of the baseball season derailed by the coronavirus pandemic and then a lengthy negotiation between the MLB and its players, he’s happy to be at the diamond at all.

Varsho returned to central Wisconsin in March after the MLB sent players home from spring training in the early days of the pandemic. That homecoming lasted months, until the Diamondbacks opened summer camp at the start of July.

He luckily has a batting cage at his house and had access to additional equipment thanks to knowing the strength coach at Marshfield High School. He also was able to hook up with another Express alum and Wisconsin native, a pairing that kept both professionals tuned up for a potential 2020 season.

“As the weeks went on and work started picking up, Jordan Zimmermann and I got a hold of each other,” Varsho said. “He wanted to throw some bullpens, so it was really cool to be able to catch his bullpens and be able to kind of stay ready for the season.”

Varsho admitted there were times he wondered if there would be a season, but that uncertainty was quelled once the MLB and its players got over the final hurdles for a 60-game slate. Varsho got the good news that he’d made the Diamondbacks’ 60-man roster in late June, saving him from sitting out the summer like a majority of minor leaguers.

So, the door is open for a potential MLB debut.

He isn’t the only familiar face on the Diamondbacks, either. The former UW-Milwaukee Panther is now playing alongside a fellow Express alum, Kole Calhoun, after the D-Backs signed the veteran outfielder in December.

“During spring we joked around a lot,” Varsho said. “It was pretty cool getting to know Kole. I had never met him before, that was actually the first time. It was really cool being able to talk to him whenever I needed something. He jokes with me all the time. Me being a younger guy and him being around, I didn’t really have too many comebacks back for him.”

With minor league baseball canceled this year, the Diamondbacks still with the team that are not on the active 30-man roster are training together. They play a daily intrasquad scrimmage, at Chase Field when the major league team is on the road and at the D-Backs’ spring training facility when the team is home.

“It’s definitely weird,” Varsho said. “It’s definitely different. I’m glad that we have a lot of pitchers here cause it’s nice to be able to play at least five innings a day just to keep me ready for whenever the call is going to happen. But it’s different. It’s weird, but hopefully everything will work out.”

When that call will come is obviously up in the air, with factors working both for and against him. Having Kelly and Vogt means Arizona likely won’t be hurting for production from the catcher position. The team is also incentivized to wait for a call-up to get an added year of service time.

But the National League instituted the designated hitter this season, meaning there’s more at bats to go around. Varsho also has versatility few catchers in the history of the MLB can boast, a level of quickness that allows him to also play the outfield.

Diamondbacks director of player development Josh Barfield called Varsho one of the team’s fastest players in the minors, as well as the best base stealer, in a radio interview in June. He got starts in the outfield last season and spent time in centerfield during the D-Backs’ intrasquad scrimmages in summer camp.

“The versatility he provides defensively is what’s going to provide the best opportunity for him to make an impact up here,” Diamondbacks GM Mike Hazen told The Athletic.

Varsho said he played a bit of outfield in college and in the Northwoods League, but this is still somewhat of an experiment.

“I really enjoy playing the outfield,” Varsho said. “I just think it’s fun when I go out there and just kinda be an athlete, do different things instead of mentally going through a game with calling a game. I always loved going out there last year because I knew my catcher so well and I kind of knew how we were going to attack hitters. I could kind of move myself around and others. It’s kind of understanding both positions and using it for my benefit.”

Going straight from Double-A to the Bigs would be a major jump for Varsho. But with no chance to play any other way, learning on the job with the Diamondbacks might be the best way to maximize his development.

And based on the opinion of one of his fellow catchers, he won’t be overwhelmed when the time comes.

“This is a kid that is well wise beyond his years,” Vogt told Arizona Sports 98.7 FM. “I’m blown away by his baseball IQ and his self-evaluation skills. He knows what his strengths are, he knows where he needs to get better and he’s working towards those. ...

“And when you can hit the way he can, he’s gonna stick around for a very, very long time.”