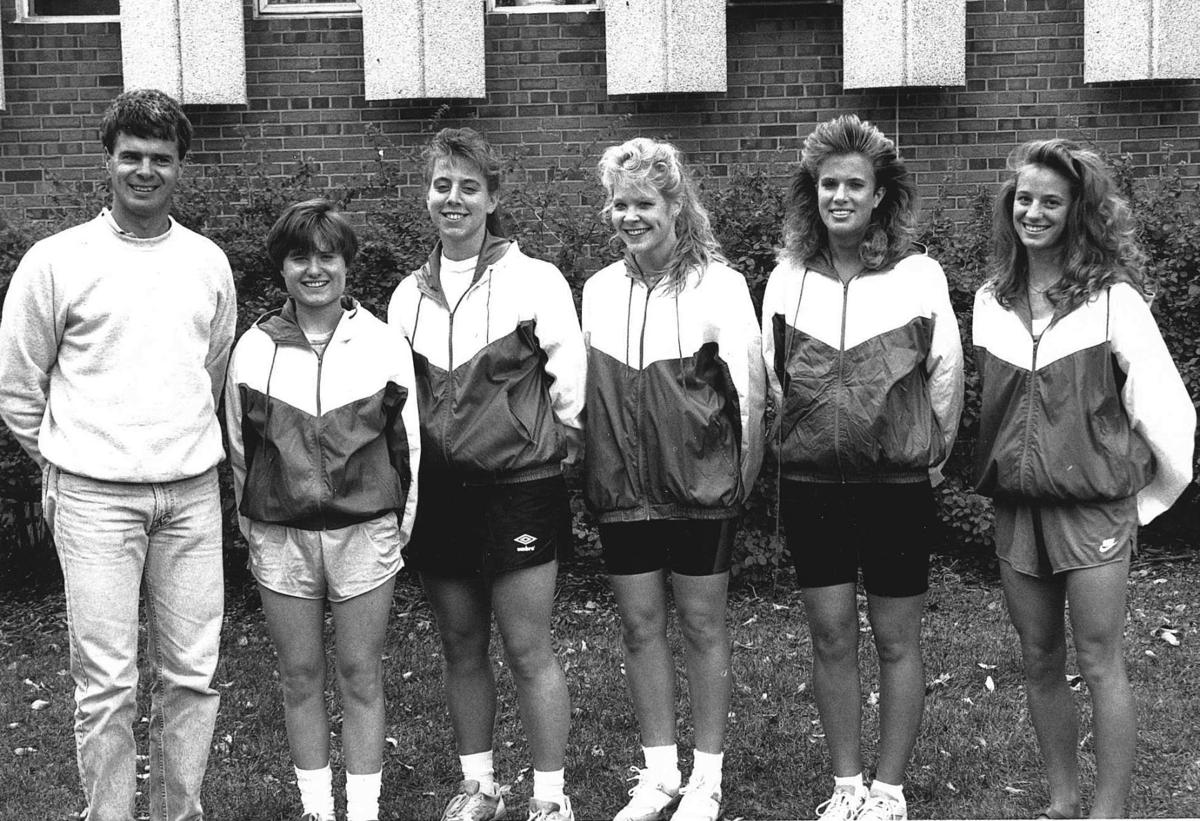 Steve Terry, far left, is pictured during his coaching days at UW-Stout. 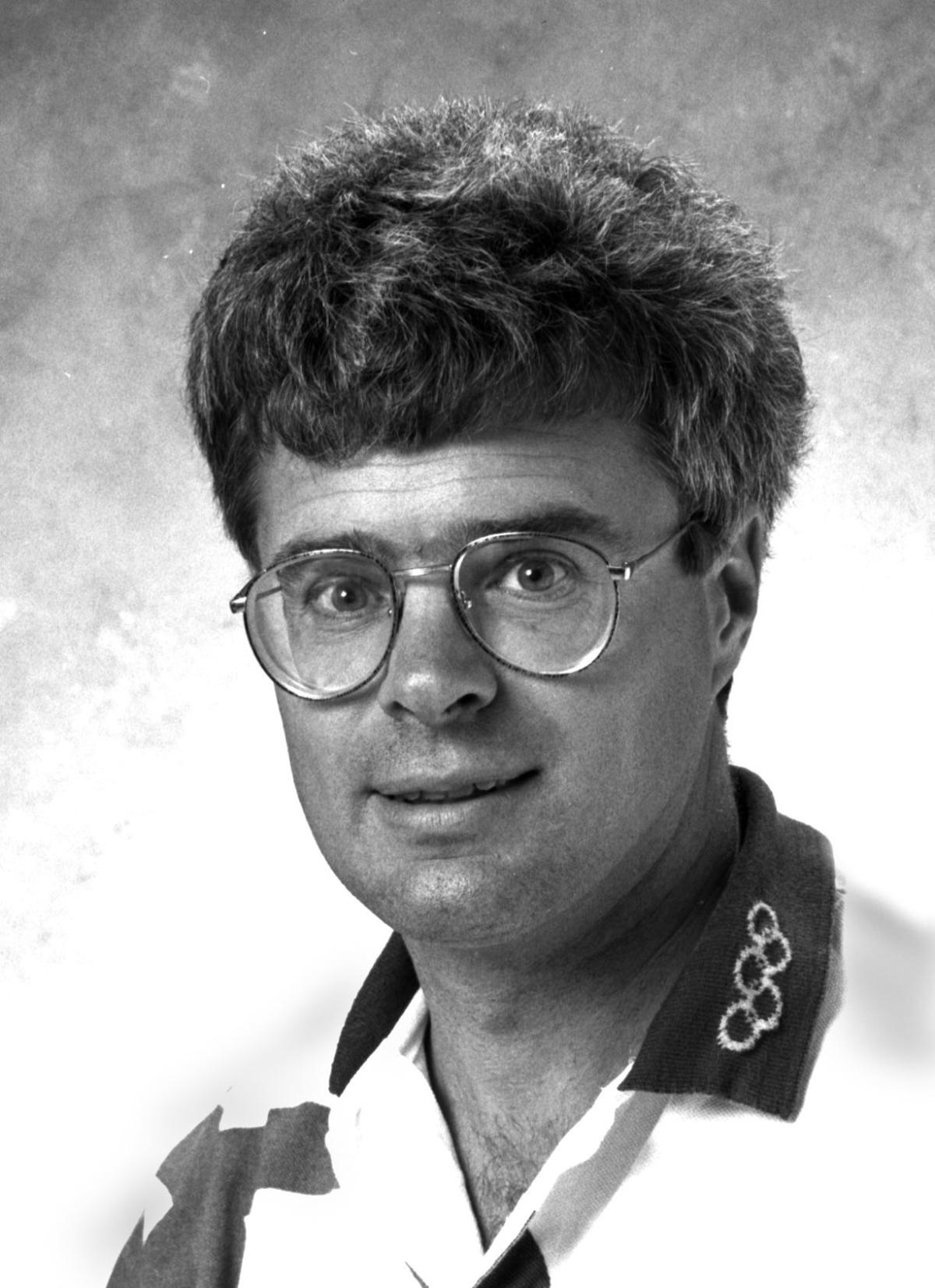 Steve Terry had a motto.

And boy, did he live it.

The former coach and athletic director at UW-Stout left an unforgettable impression on everyone around him. Since his passing on June 2 at the age of 63, story after story has been told about the passionate worker and friend with the booming, knock-you-out-of-your-seat laugh.

“Steve was a guy that just enjoyed the fullness of life,” said John Wesolek, Terry’s former co-worker and boss at Stout, as well as a lifelong friend. “He was always a good time. ‘Fun is good’ was his motto, and he brought that into the office and to his family and friends every day. He was really an energetic personality that will be missed dearly in this community, and certainly by me.”

His list of accomplishments is long. During his stint as athletic director, the Blue Devils’ teams received more NCAA tournament bids than any other period in Stout history. He helped men’s hockey and men’s golf become varsity sports, and aided in the addition of women’s soccer and women’s golf. As a track and field coach, he helped Blue Devil athletes win 31 All-America awards.

But those feats aren’t the only thing Terry is remembered for. Far from it.

“If I could grow up right now, I’d want to be like Steve Terry,” said Eddie Andrist, who coached the Stout men’s basketball team while Terry was the athletic director. “There’s nobody who loved life like he did, who lived bigger than he did. If we could all be like Steve Terry, we’d all be a better person.”

Those who knew Terry closely all had similar sentiments. His enthusiasm was infectious.

“I used to think I was special, because he just made you feel special,” said Terry Anders, a six-time national champion in track and field who was recruited to Stout by Terry. “But then I’ve read some of these stories from all these other athletes he coached, and I go ‘Holy cow. He’s the one that was special.’ Because there are so many people that he affected.”

That holds some weight coming from Anders. Few have a more impressive story about Terry than the former Blue Devil great.

Anders was set to compete in several events at the 1996 NCAA championships in Naperville, Ill., when chaos struck. He was on his way to check in for the triple jump when an official held him back, forbidding him from crossing the track due to an event that was scheduled to run in the coming minutes.

So Anders waited, and when he got to the check-in for the triple jump, he was too late. By missing the designated time, he was disqualified from every event he was slated to compete in.

Terry, who was the athletic director at the time, heard about the situation and immediately started the process of moving mountains to get Anders’ eligibility back.

“Steve just said ‘We’re not letting this go, we’re going to battle this,’” said Wesolek, who was also at the meet as an athletic department representative. “So we sat down, and I know an attorney in Chicago and got on the phone with him and told him our situation. And he, in turn, called the attorney general of the state of Illinois, who said if the NCAA didn’t respond in a positive way, we could shut this meet down.”

Terry and Wesolek stayed up all night working to get the NCAA to reverse the decision. The result?

The following morning, the NCAA committee met and announced that Anders was reinstated. He went on to win three national titles that weekend.

“It was all because of Steve’s tenacity, his never-give-up attitude,” Wesolek said.

And Anders didn’t even know it was happening. Terry didn’t want him to worry about it.

“He didn’t tell you anything was wrong, he just took care of it,” Anders said. “He didn’t want any credit. I later found out that he was up until about 5 in the morning for me. ... And if I wouldn’t have been able to compete, I don’t know if I would have even kept going. I might have just quit everything, because it would have been that devastating. So he was just an incredible, selfless man. I don’t even know how to describe him, he’s that incredible.”

Terry brought that passion to each of his roles. As an athletic director, he was great at getting programs and teams to work together. And he never micro-managed, Andrist said.

And “fun is good” never went away. Everybody who worked with Terry had plenty of plaudits for his ability to tell extravagant, outrageous stories.

There was his story about the time he got pulled over for littering — for tossing a few pistachio husks out his car window. As the story goes, when the officer offered to let him off with a warning, several acorns fell onto his car. Terry asked if the squirrels were littering too, but was quick to learn that fell under animal control’s jurisdiction. So Terry pleaded with the officer to give him a ticket — it was too good of a story to pass up, and he needed evidence that it happened. Plus, the officer got something from it too — he could tell his buddies somebody successfully talked his way out of a warning.

Or there was the time that Anders took a recruiting visit to Stout. He met with Terry, who said he could take him for a ride in his sports car.

“I’m thinking ‘Wow, we drive a station wagon where you can see through the floorboards, now I can see a sports car?’” Anders said.

Terry tossed Anders a towel and told him it rained the night before, and they made their way out to the parking lot.

“We get out there, and there’s this brown piece of junk. And I’m not kidding when I say the bumper and the trunk were bungee-strapped shut,” Anders said. “On the inside, there were Vise-Grips and half the dash was missing. There was water on the floor and we had to go get gas — but he could only put $5 worth in because there was a hole in the tank. But we had so much fun on that recruiting visit, that I knew right there that I was going to Stout.”

Everyone has a story with Terry. Many revolve around that unforgettable laugh.

“I would be on the golf course out at Tanglewood Greens, and you always knew when he was on the course,” Andrist said. “Because you could hear him, and he might be eight holes over. That laugh — you know how some people’s voices project? His laugh would project. ... That’s the one thing I’ll always remember about Steve. You always knew he was there because his laugh was so loud and infectious.”

It was one of the countless hallmarks of the man who was loved by many.

“I know I wouldn’t be where I am today without him,” Anders said. “I have a pretty good life, and a lot of it is thanks to him. ... He was just truly a special man. He touched so many people’s lives.”