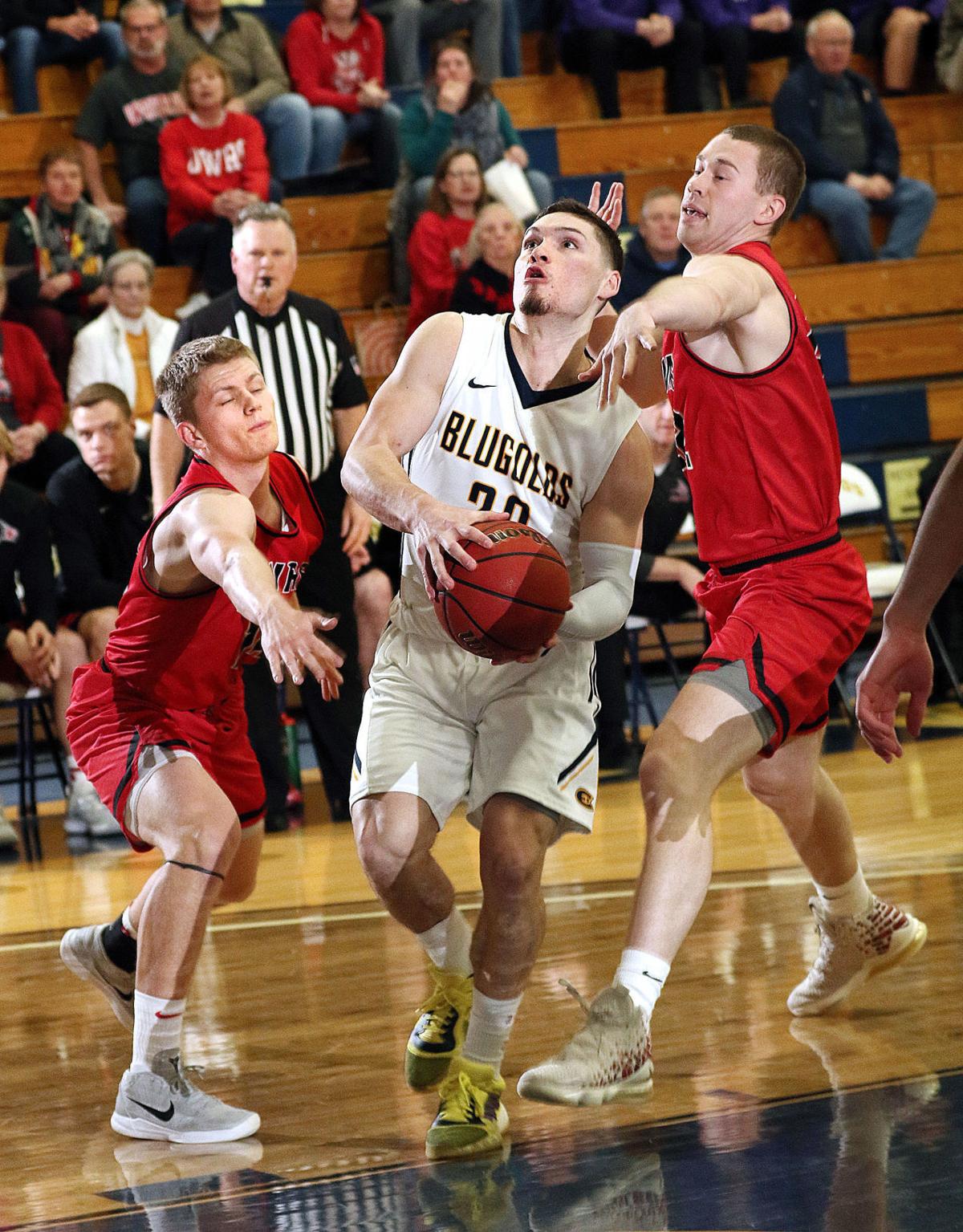 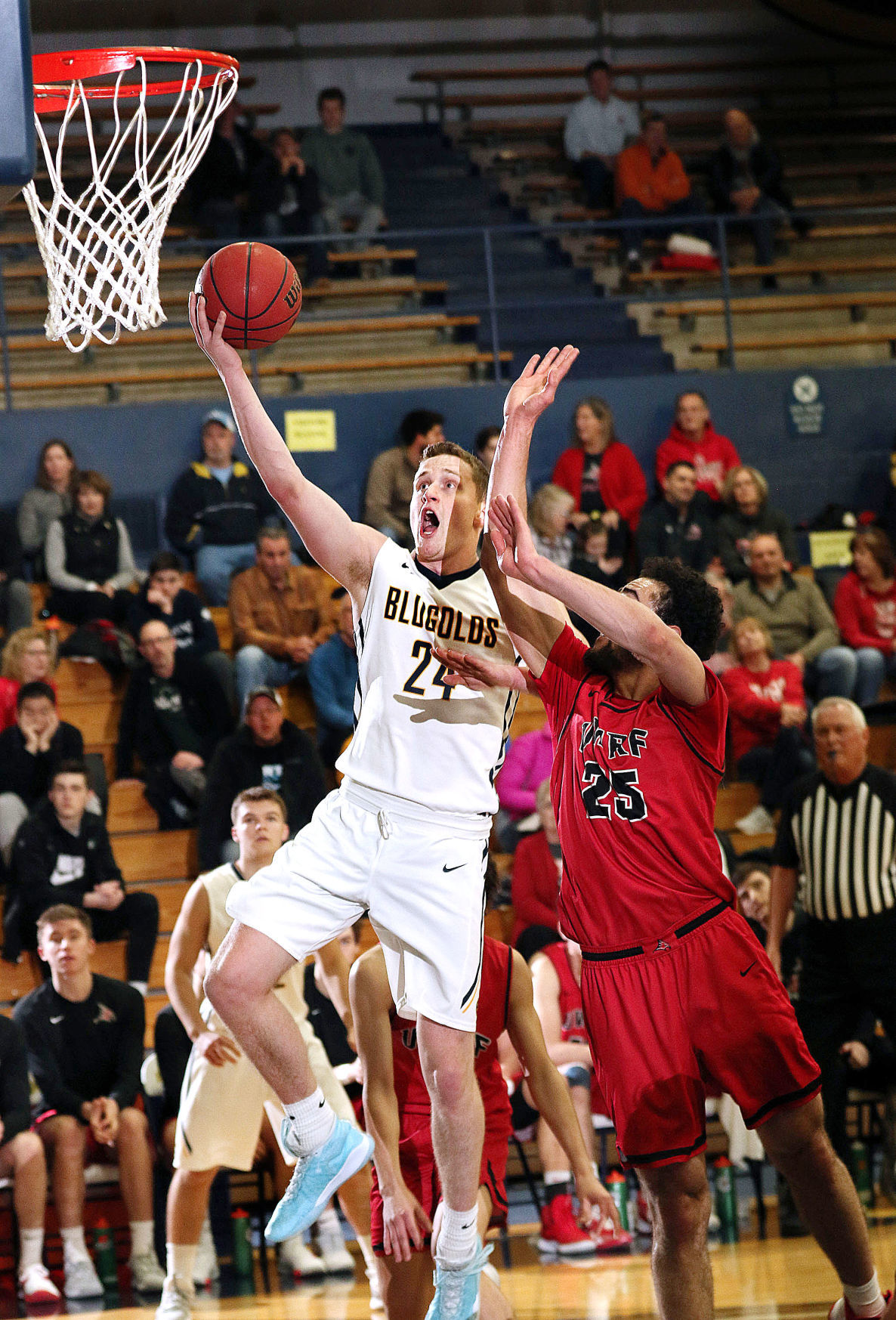 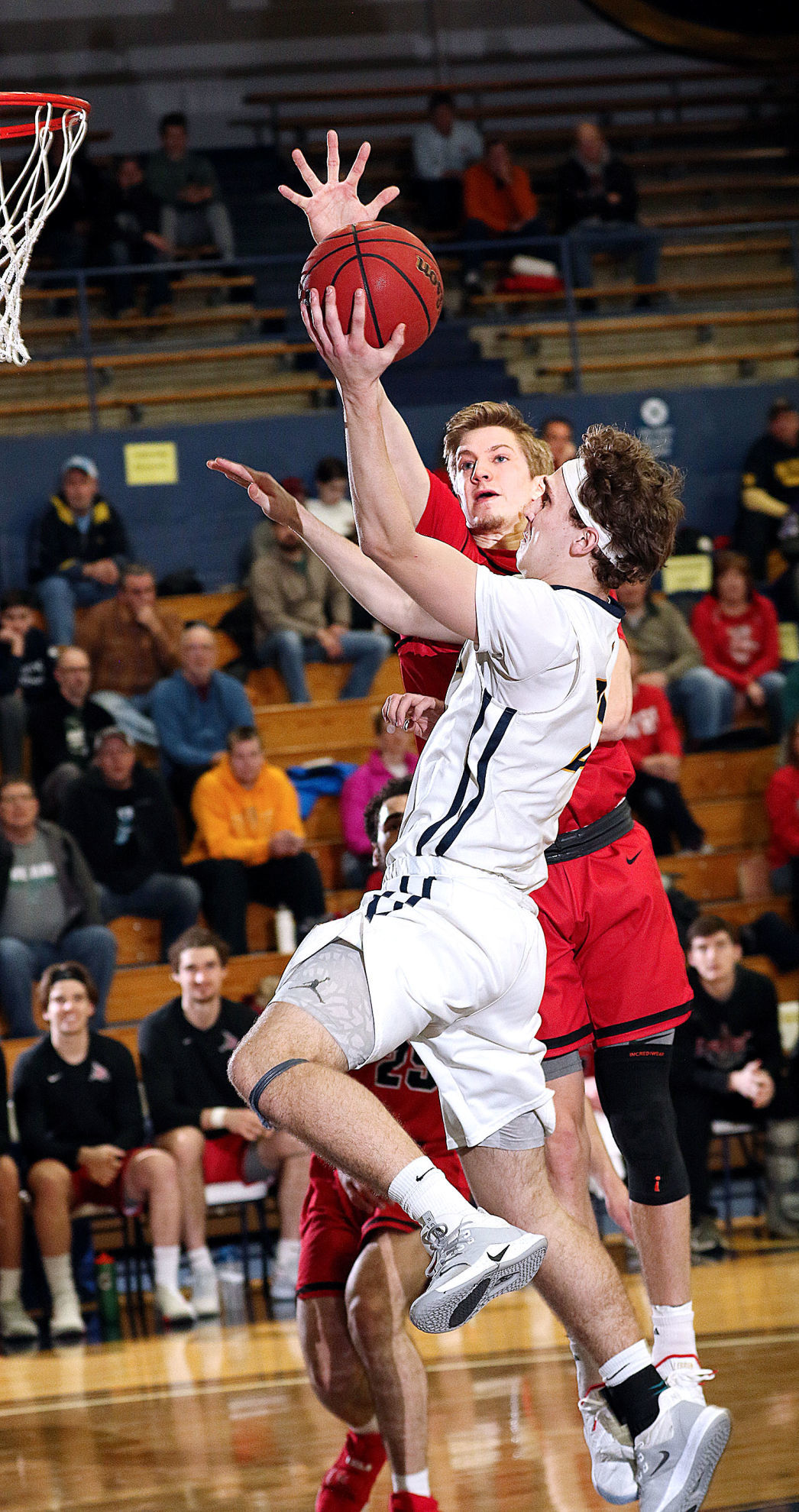 Cam Kuepers of UW-Eau Claire goes strong to the rim against UW-River Falls on Wednesday at Zorn Arena. Kuepers scored 15 points in the Blugolds' 70-66 come from behind win.

Cam Kuepers of UW-Eau Claire goes strong to the rim against UW-River Falls on Wednesday at Zorn Arena. Kuepers scored 15 points in the Blugolds' 70-66 come from behind win.

As the UW-Eau Claire fans sat quietly awaiting the start of the second half Wednesday night in Zorn Arena, there was a sudden thud behind the UW-River Falls bench.

Someone bumped into the water table, sending the Gatorade jug toppling over, creating a pool of water that required a dam of towels to clean up.

It was a harbinger of things to come for the Falcons.

After a season worst 20-point first half for the Blugolds, Eau Claire came alive in the second, nailing 3-pointer after 3-pointer to climb out of an 18-point second-half deficit and clinch a 70-66 victory over River Falls.

“The resiliency on this team is just unmatched,” senior Cole Rabedeaux said. “I haven’t been on a team that has this much resiliency. All year we’ll get down like that and I’m not really worried, I just stay composed because I know we have the talent to climb our way back to win.”

The first half was about as bad as it gets for the Blugolds. They shot just 29.6% from the field and just 3 for 13 from behind the arc. After keeping things close for the first 12 minutes, the Falcons closed out the half on an 15-3 run that included a buzzer beating 3-pointer from Jake Reeck to make it 32-20.

“It was a grind,” Blugolds coach Matt Siverling said. “Sometimes you have those kinds of halves. I thought our defense was actually pretty good to hold them to just 32 considering it felt like they hit one million, but that’s just because we weren’t making shots.”

For a moment it looked like the Falcons were going to run away with it. They extended their lead to 16 before Siverling called a desperation timeout just 1:30 into the second half.

“It just felt like we needed to get some energy, some life,” he said.

Two minutes later, the Blugolds came alive. Rabedeaux hit a 3 to make it 40-28. Spencer Page followed with a 3 of his own before Rabedeaux made it 48-37 with a pair of 3-pointers that forced the Falcons to take a 30-second timeout.

That’s when Carter Brooks began heating up. His teammates swung the ball around the arc and found him for nine of the Blugolds’ next 11 points, all via the long ball to pull Eau Claire within two.

“We all have a lot of trust in each other to knock down shots and I think that’s why we’ve been playing so well lately,” Brooks said. “It’s definitely a great feeling having that trust in your teammates and knowing they believe in you.”

With 6:43 to go in the game, Rabedeaux hit a driving layup to put the Blugolds up and they never looked back.

He finished the evening with a game-high 27 points, seven rebounds and five steals, with 21 of those points and all of his steals coming in the second.

“When he knew we needed a spark on the defensive end of the floor, he really took it upon his shoulders and made some plays down there,” Siverling said of Rabedeaux. “That’s really what got us back into the basketball game.”

Brooks finished the night 6 for 10 from behind the arc with all of his 18 points coming from deep.

“He did a hell of a job in the second half knocking them down,” Rabedeaux said of Brooks.

The Blugolds will now turn their focus to UW-Whitewater, who they’ll visit on Saturday at 5 p.m. After that it’ll be back home for Senior Night on Wednesday, Feb. 19 to take on UW-Platteville, before wrapping up the season in UW-La Crosse.

All three of the games will be key for the Blugolds who finished Wednesday night third in the WIAC, eyeing one of those top two spots in the conference tournament.

“We’re going to enjoy this game for the night, but tomorrow we’re right back to the grinding board because we’re in a good spot right now to win the conference championship,” Rabedeaux said.