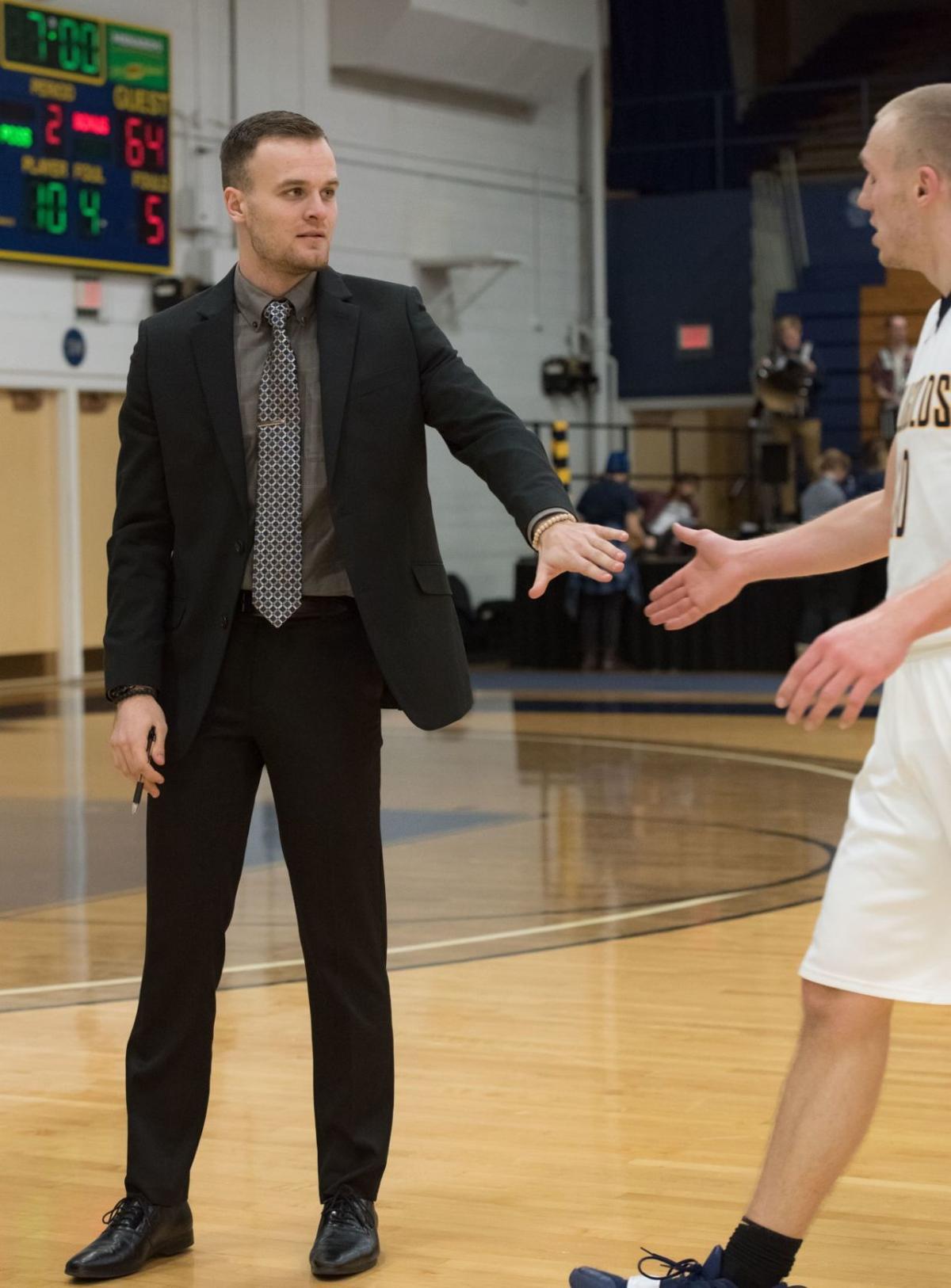 Ben Retzlaff stands on the Zorn Arena court while with UW-Eau Claire during a game against Carleton College on Dec. 10, 2018 in Eau Claire. 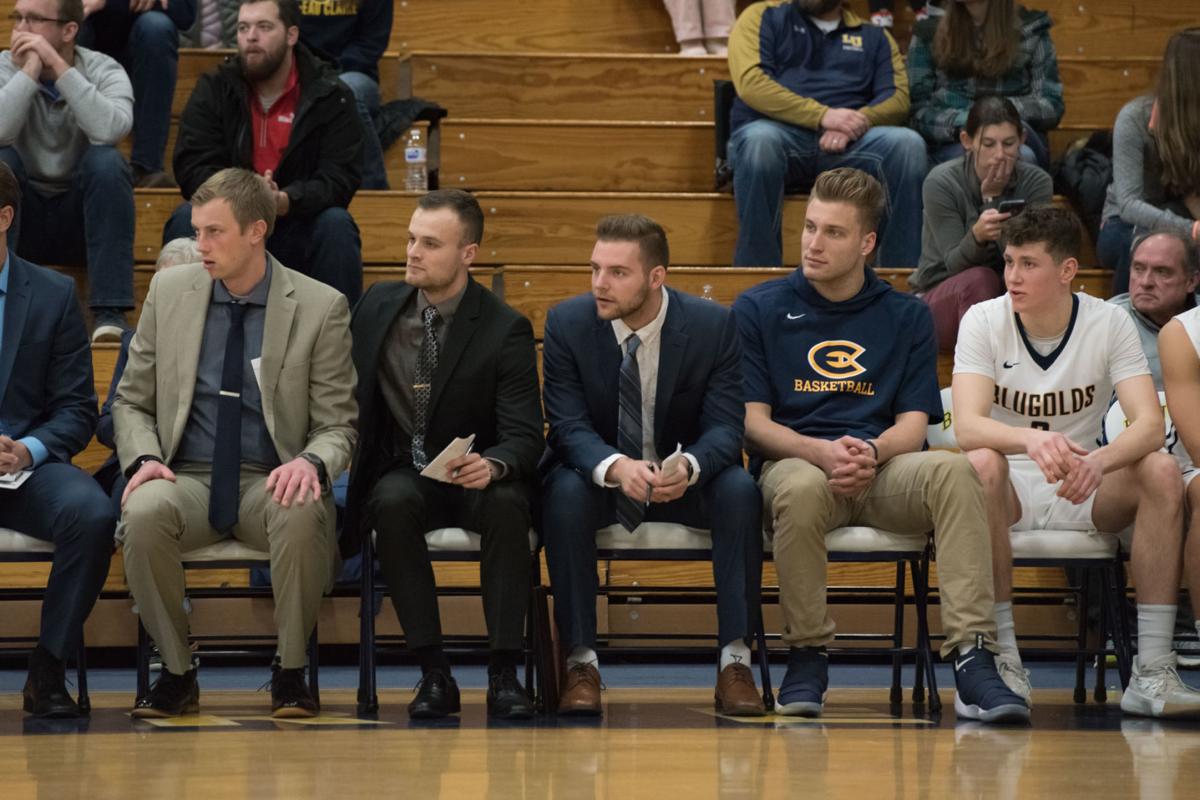 Ben Retzlaff, second from left, sits on the UW-Eau Claire bench during a game against Carleton College on Dec. 10, 2018 at Zorn Arena. 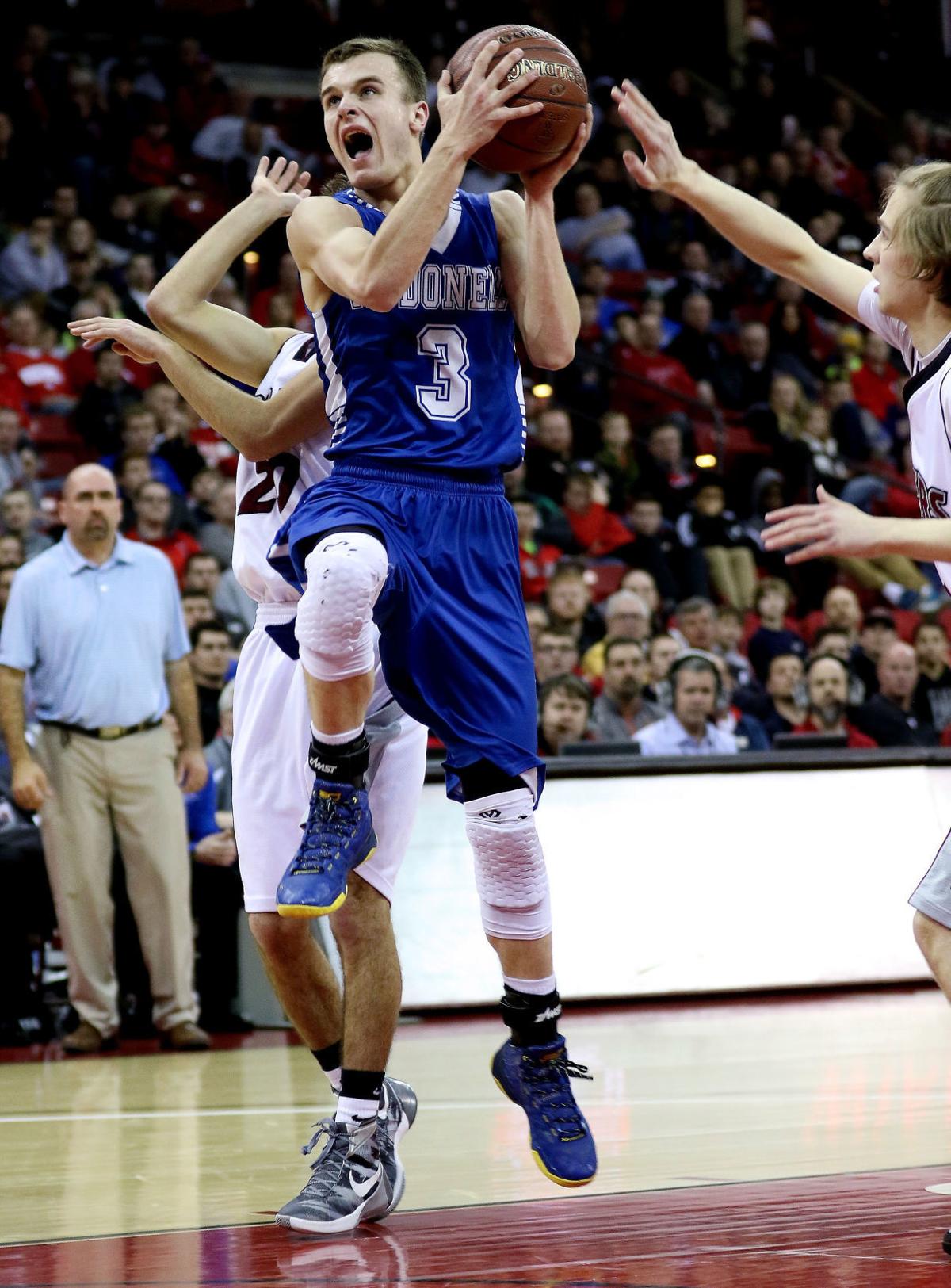 McDonell's Ben Retzlaff drives the lane against Green Bay N.E.W. Lutheran in the second half of a WIAA Division 5 state semifinal Friday, March 18, 2016 at the Kohl Center in Madison.

Ben Retzlaff stands on the Zorn Arena court while with UW-Eau Claire during a game against Carleton College on Dec. 10, 2018 in Eau Claire.

Ben Retzlaff, second from left, sits on the UW-Eau Claire bench during a game against Carleton College on Dec. 10, 2018 at Zorn Arena.

McDonell's Ben Retzlaff drives the lane against Green Bay N.E.W. Lutheran in the second half of a WIAA Division 5 state semifinal Friday, March 18, 2016 at the Kohl Center in Madison.

A former state champion at McDonell, Retzlaff traveled across Wisconsin to kick off his college basketball career at St. Norbert four years ago. After a season where he saw limited time on the court, the former guard decided it wasn’t the right fit. He walked away from his playing career, transferring back home to UW-Eau Claire.

It was an amicable departure — Retzlaff said St. Norbert wanted him to stick around as a manager, but the financial side made more sense at UW-Eau Claire — so the Green Knights put in a good word about Retzlaff to Blugolds coach Matt Siverling.

“Any time at this level you have someone that’s passionate about coaching that wants to provide their services, you don’t turn that down,” Siverling said. “Some guys do it just because they enjoy basketball. Ben did it because he wanted to learn, he wanted to be a part of the game and he had aspirations of working at the next level.”

He brought Retzlaff on as a manager initially, but Retzlaff’s duties were increased nearly immediately once assistant Greg Polkowski left to take a head coaching job at UW-Superior.

“Coach was kind of in between hires and ended up needing me for more than just managerial duties,” Retzlaff said. “I kind of got into that student assistant role and was actually doing coaching stuff within the first couple months of being on campus there.”

Retzlaff has stuck on the staff in the three seasons since, up until his undergraduate graduation this spring. And that experience behind the Blugold bench has paid off. Retzlaff has gone DI, joining the Louisiana Tech coaching staff as the program’s graduate assistant.

“I’m just excited and appreciative of the opportunity,” Retzlaff said. “It definitely was created by the unrivaled opportunity Coach Siverling gave me as an undergrad to get involved in coaching to the extent that he trusted me with. As just a college student, he allowed me to have a resume that can go up against coaches all across the country competing for graduate assistant positions.”

It’s a big move for Retzlaff, both literally and figuratively. Growing up in the Chippewa Valley and going to two Wisconsin-based colleges, this marks the first time he’s lived outside the Dairy State.

He’ll thankfully be working with someone with a similar background, disposition and knowledge of the best hangout spots around the Blugold campus: Louisiana Tech head coach and former UW-Eau Claire basketball player Eric Konkol.

That Blugold connection played into Retzlaff getting to Louisiana Tech. Konkol said Siverling raved about Retzlaff, and that meant a lot considering the relationship the two coaches share.

“We’ve known each other for a very, very long time,” said Konkol, a part of the 2000 UW-Eau Claire team that reached the DIII national championship. “In my conversations with Ben we knew a lot of the same places and same people and could connect on that level. My wife is an Eau Claire graduate as well, and she played for coach (Tonja) Englund there. We have such fond memories of Eau Claire and the people there. So to be able to have someone from Eau Claire join us is pretty special.”

Retzlaff put in time working Division I camps all around the country during his undergrad years, nearby at Wisconsin and Marquette and as far away as Texas A&M. With the Blugolds he did scouting reports, graphic design and social media, even the laundry. Once he built a rapport with the squad, he was able to serve as a liaison between the coaches and players, understanding both sides’ situation.

“Being with us for three years, I think each year he took on more responsibility and had an opportunity to learn different aspects of running a college program,” Siverling said. “To get into Division I you have to kind of start at the bottom and work your way up to become a coach, an assistant coach and then potentially a head coach. There’s kind of a process there, and most of the time you don’t start out as a coach, you’re doing a lot of the behind-the-scenes stuff. For him to be able to do that for us as well as coach gave him an opportunity to learn a lot of different things.”

And he did it all while balancing being a full-time undergraduate student.

“Whatever needed to get done, I just got it done,” Retzlaff said.

His time with the program culminated in the Blugolds’ first NCAA Tournament appearance since 2001 and a victory in the first round against Whitman.

“Knowing that it was probably my last year at Eau Claire, to be able to get over that hump and get to the tournament was pretty cool,” Retzlaff said. “Especially being a hometown kid, between playing at McDonell and being a part of that state championship and the NCAA Tournament at Eau Claire, it’s been right in the thick of some of the best basketball success in this area the past decade. I’m really fortunate to have those experiences.”

He’ll look to continue that success at Louisiana Tech, which has already built stability under Konkol. The Bulldogs have won at least 17 games in all five seasons Konkol has been at the helm and 20 or more games in four of those years. Louisiana Tech went 22-8 overall and 13-5 in Conference USA last season before the year was abruptly ended by the coronavirus pandemic prior to the team’s conference tournament opener.

“We had a first round bye and we were getting ready to play in the first game of our conference tournament,” Konkol said. “Things that evening started to change with the game with the Utah Jazz and Oklahoma City Thunder. That changed things at a certain level. Then that morning we were getting ready to meet with our team and go over the game plan and watch video and we saw other conference tournaments begin to cancel. We knew right then that was probably the end. Without a doubt the most difficult meeting and announcement I’ve ever had to go through was to let our team know that our season was over.”

The Bulldogs weren’t the favorite, seeded third in the Conference USA bracket, but had reason for optimism considering their 22 overall wins led the league. Instead, the program has to wait at least one more season to earn its first trip to the dance since 1991.

“I’d say that grieving process went on for a while, but we’re a very forward-thinking group,” Konkol said. “We’ve got to be able to move on. We’re trying to win the (weight room) right now, figuring out how to get better during this time and just try to do it better than everyone else.”

Retzlaff has been down in Ruston since July 3, working with the Bulldogs squad during preseason work. It’s a difficult and unusual time to join a new program, but emphasizes a part of his skill set. Without an ability to get recruits on campus, the graphics he can send out to potential targets become even more important than usual.

He’s been involved in workouts in addition to more administrative roles, paperwork, gear orders, making sure the court is ready to go.

He’ll spend two years with Louisiana Tech, earning a masters degree in business administration. Then, he’ll decide whether he wants to pursue a career in basketball further.

“At this level there are so many different parts to this business besides just the Xs and Os, just within the game stuff,” Retzlaff said. “There’s so much operationally and administratively that goes on. I think that’s again why it’s so nice to do this graduate assistantship at this level because you get to see all those aspects, you’re not just filed into that small role where that’s all you get to see.”