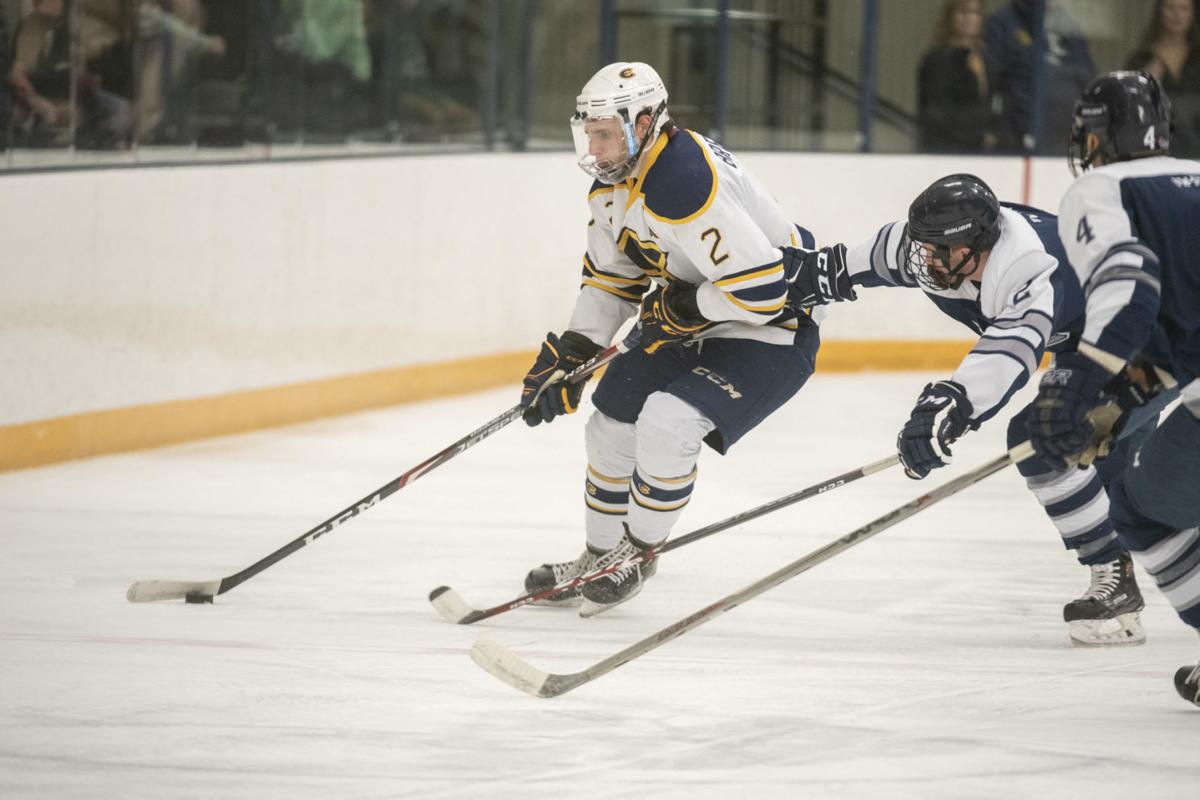 UW-Eau Claire’s Jake Bresser, an Eau Claire Memorial graduate, skates with the puck during a game against UW-Stout on Feb. 1 at Hobbs Ice Arena. 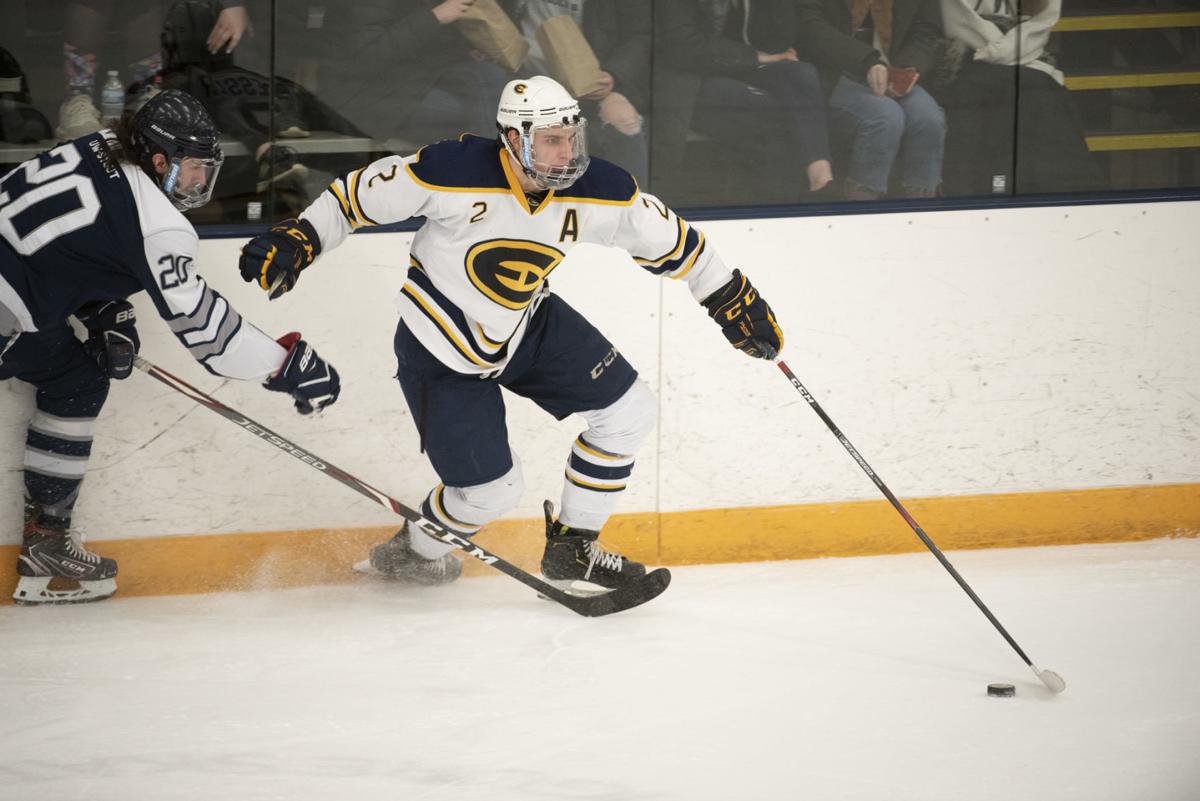 UW-Eau Claire's Jake Bresser handles the puck during a game against UW-Stout on Feb. 1 at Hobbs Ice Arena. 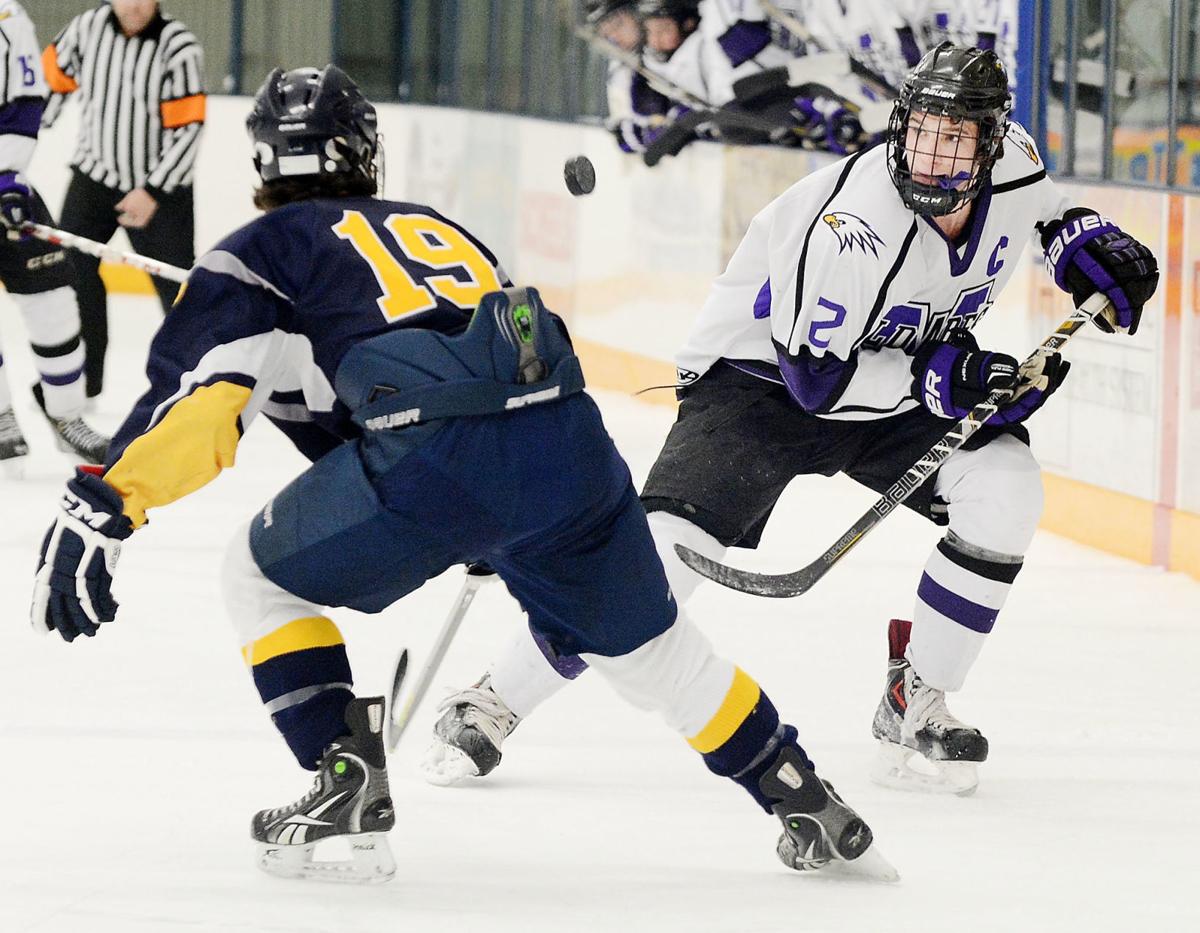 Memorial's Jake Bresser, right, battled for the puck with River Falls' Jack Benusa in the first period during boys hockey action on January 21, 2014. 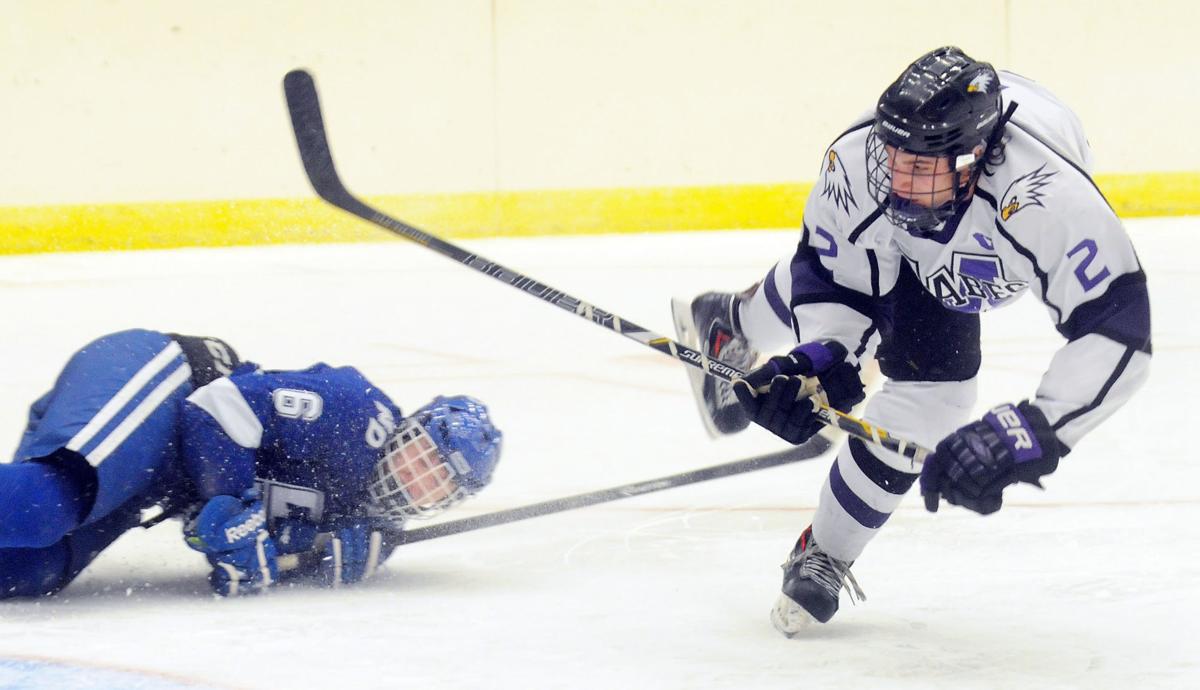 Eau Claire Memorial's Jake Bresser was upended by Notre Dame's Stephen Lovell on a breakaway in the second period at the Alliant Energy Center in Madison on March 6, 2014.

UW-Eau Claire’s Jake Bresser, an Eau Claire Memorial graduate, skates with the puck during a game against UW-Stout on Feb. 1 at Hobbs Ice Arena.

UW-Eau Claire's Jake Bresser handles the puck during a game against UW-Stout on Feb. 1 at Hobbs Ice Arena.

Memorial's Jake Bresser, right, battled for the puck with River Falls' Jack Benusa in the first period during boys hockey action on January 21, 2014.

Eau Claire Memorial's Jake Bresser was upended by Notre Dame's Stephen Lovell on a breakaway in the second period at the Alliant Energy Center in Madison on March 6, 2014.

Jake Bresser and the rest of the UW-Eau Claire men’s hockey seniors fought for four years to get the program back in the NCAA Tournament.

The highly-successful Blugolds entered the season still trying to return to the pinnacle of DIII hockey for the first time since winning a national championship in 2013. They came close two years ago when they bested UW-Stevens Point in the WIAC championship, but the Pointers were still chosen as the WIAC representative for the tourney thanks partially to the league not having an automatic qualifier.

This season, everything came together. The Blugolds rolled to a 22-4-2 record, were often ranked among the top teams in the country and earned a share of the WIAC regular season title before knocking off the Pointers in the conference tournament title game at Stevens Point.

“We were just a really tight-knit group of guys,” said Bresser, who enjoyed a stellar career at Eau Claire Memorial before jumping to the college ranks. “We had a lot of fun with it.”

They were rewarded with that coveted tournament selection and earned a stellar seeding to boot. The Blugolds received a bye, meaning they’d head right to the Frozen Four by beating the winner of a first-round matchup between St. Thomas and Lake Forest.

Bresser and his classmates finally achieved a goal they’ve been talking about for years only to have it completely wiped out by the coronavirus pandemic. The Division III men’s hockey tournament was shut down before it even began.

It’s a reality the former Old Abe is coming to terms with.

“To finally get that and see the bracket and see that we have a pretty good chance of a deep run at it and then just have it cut short was something that was probably the worst thing in my four years there,” Bresser said.

As a senior, he won’t get another chance at it. He’s still not entirely sure he’ll play another game of competitive hockey. But he can at least take solace in knowing his college career ended with fanfare.

“Obviously we would have wanted that excitement of the tournament and then hopefully going back east again, but looking back at it, I ended my four years with a win,” Bresser said. “I’m glad that I was fortunate enough to get that, but at the time it was tough because we didn’t even realize that was our last game. We were all fired up in the locker room after a really good win and knowing that our season was pretty much 99.9% going to continue with getting into the tourney. To find out mid-practice week that everything’s over was tough, especially for us seniors, knowing that that was our last game. But it was a hell of a game to go out on.”

Bresser was an offensive machine at the prep level, setting Memorial records for goals in a season and career. UW-Eau Claire hockey head coach Matt Loen was well aware of Bresser back then, but admitted he wasn’t really trying to recruit him. Loen said he figured a Division I offer would come Bresser’s way.

“He was an extremely good Wisconsin state high school hockey player,” Loen said. “I don’t think junior hockey worked out as well for him with aspiring to get a Division I opportunity. So he made the best of what he could, coming to do D3. ... To have him here, being from Eau Claire and the way he progressed here, was a great accomplishment.”

Bresser came home, and he has no regrets.

“I met some incredible people and had some pretty cool memories,” Bresser said. “I wouldn’t trade anything or have chosen to go anywhere else.”

Bresser saw the year-by-year progression you’d hope for, upping his point total each of his four seasons with the Blugolds. After a four-goal, 17-assist performance as a junior, Bresser found his scoring touch again in his final year by notching 16 goals in addition to 17 assists.

“His junior year he didn’t have too much puck luck,” Loen said. “He could have easily had a dozen goals his junior year as well, but it just seemed like he was not getting any luck.”

He played a major role in that final collegiate game he now fondly looks back on, scoring one of his six game-winning goals on the year in the WIAC championship. UW-Eau Claire needed to dig itself out of an early hole, with UW-Stevens Point going up 2-0 within the first 12 minutes of play. But the Blugolds fought back, with Bresser scoring the go-ahead goal unassisted midway through the second period before teammate Logan Von Ruden added the insurance tally ten minutes later.

“Obviously it was not how we wanted to draw it up,” Bresser said. “My line, we went out and were minus-2, got scored on twice. (Loen) obviously got on us a little bit and that fired us up. ... We just couldn’t get down on it, even though we were down 2-0. We’ve just got to keep some positivity on the bench.”

Bresser said he’s now enjoying some time to rest and relax post-graduation while staying with a friend in Stillwater, Minn. He said he’s heard from a couple teams with opportunities to continue his hockey career, but is factoring in the uncertainly professional sports face amid the coronavirus pandemic.

“Nobody knows what they’re going to do for seasons next year,” Bresser said. “Some of the lower professional leagues, they can’t really function without having fans and stuff like that. It’s not necessarily if a team feels comfortable holding games, they need to make sure they’re profitable and it’s economical for them to have a season. It’s kind of just a waiting game unfortunately.”

He said he’s also exploring opportunities in finance and accounting.

If this is the end of his career, he departs with plenty of positive memories representing his hometown, including a WIAA state title in 2013. He would have liked to end his college career with a national championship and one final raucous playoff game at Hobbs Ice Arena. He’ll have to settle for ending it with a WIAC championship.

“That was definitely something really special,” Bresser said of staying in Eau Claire. “It showed throughout the season, family, friends always reaching out to me, saying, ‘congrats’ and ‘good luck.’ It showed how tight the hockey community is in Eau Claire and was something that was pretty special for me to be able to have that support system around me.”