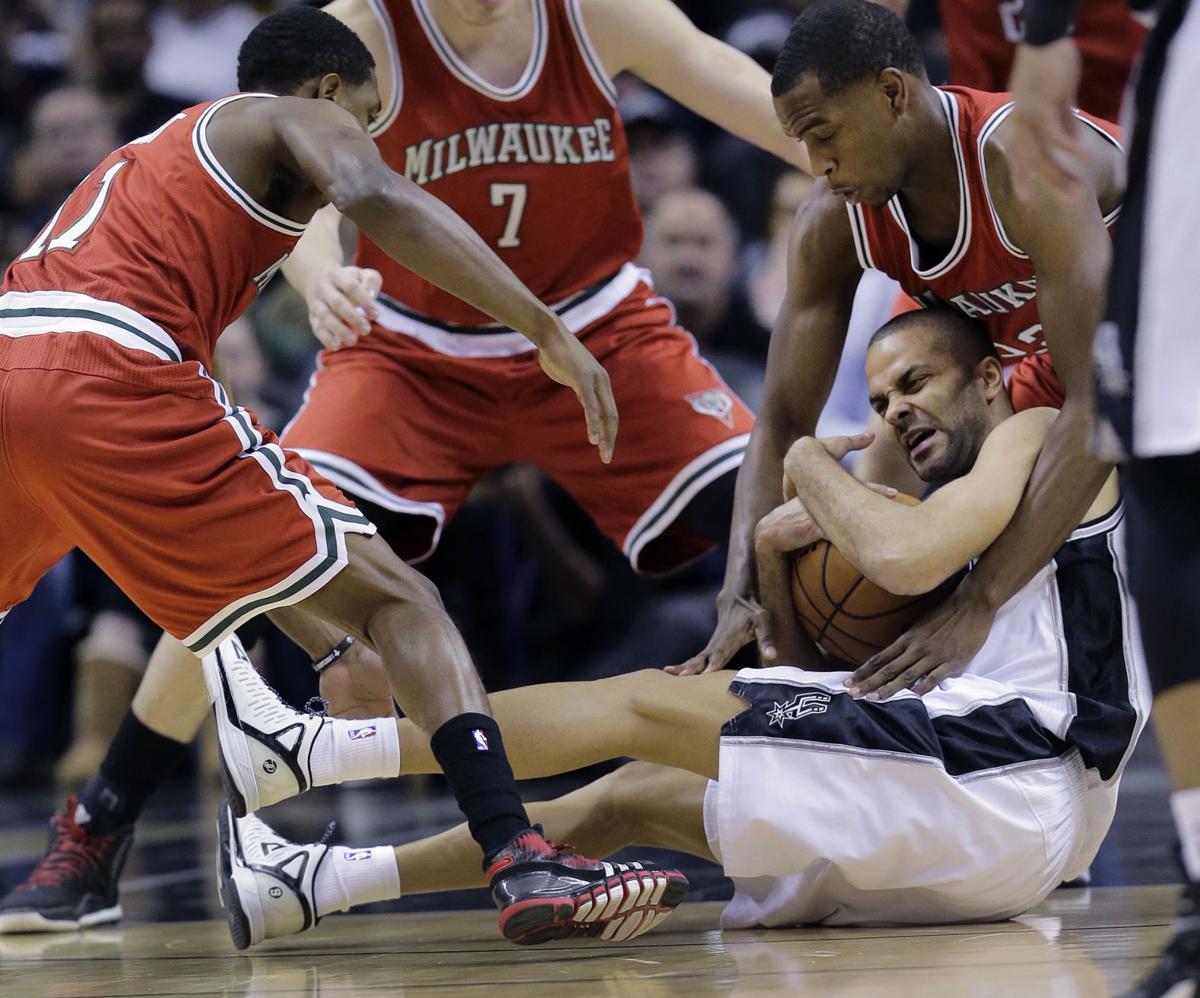 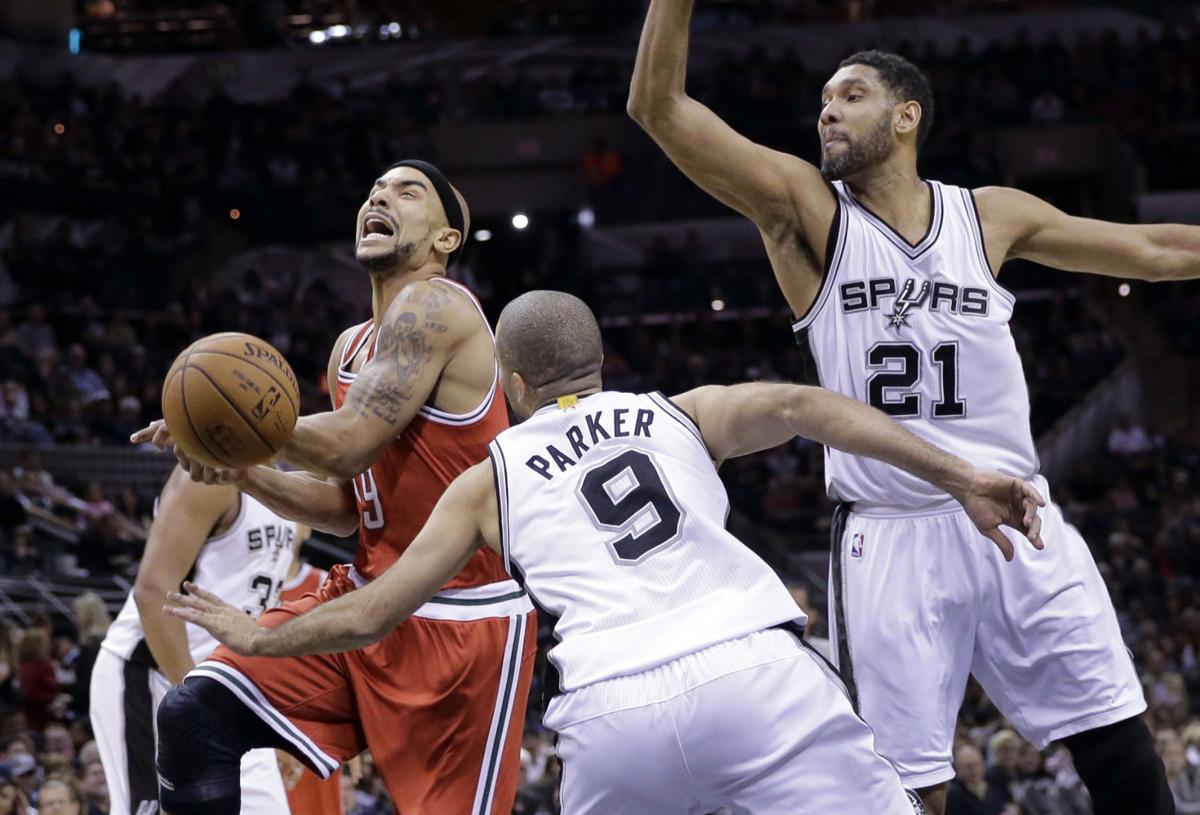 Milwaukee Bucks’ Jerryd Bayless (19) is fouled as he tries to drive to the basket past San Antonio Spurs’ Tony Parker (9) and Tim Duncan (21) during the first half of an NBA basketball game, Sunday, Jan. 25, 2015, in San Antonio. (AP Photo/Eric Gay) 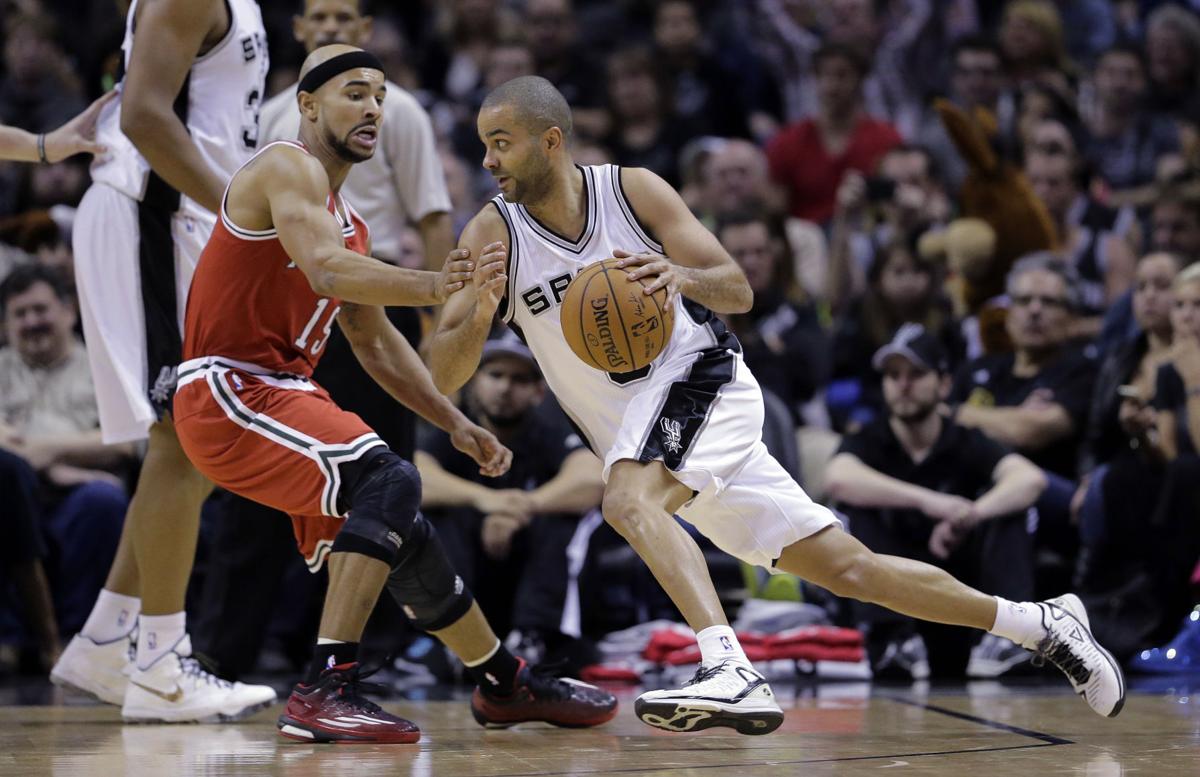 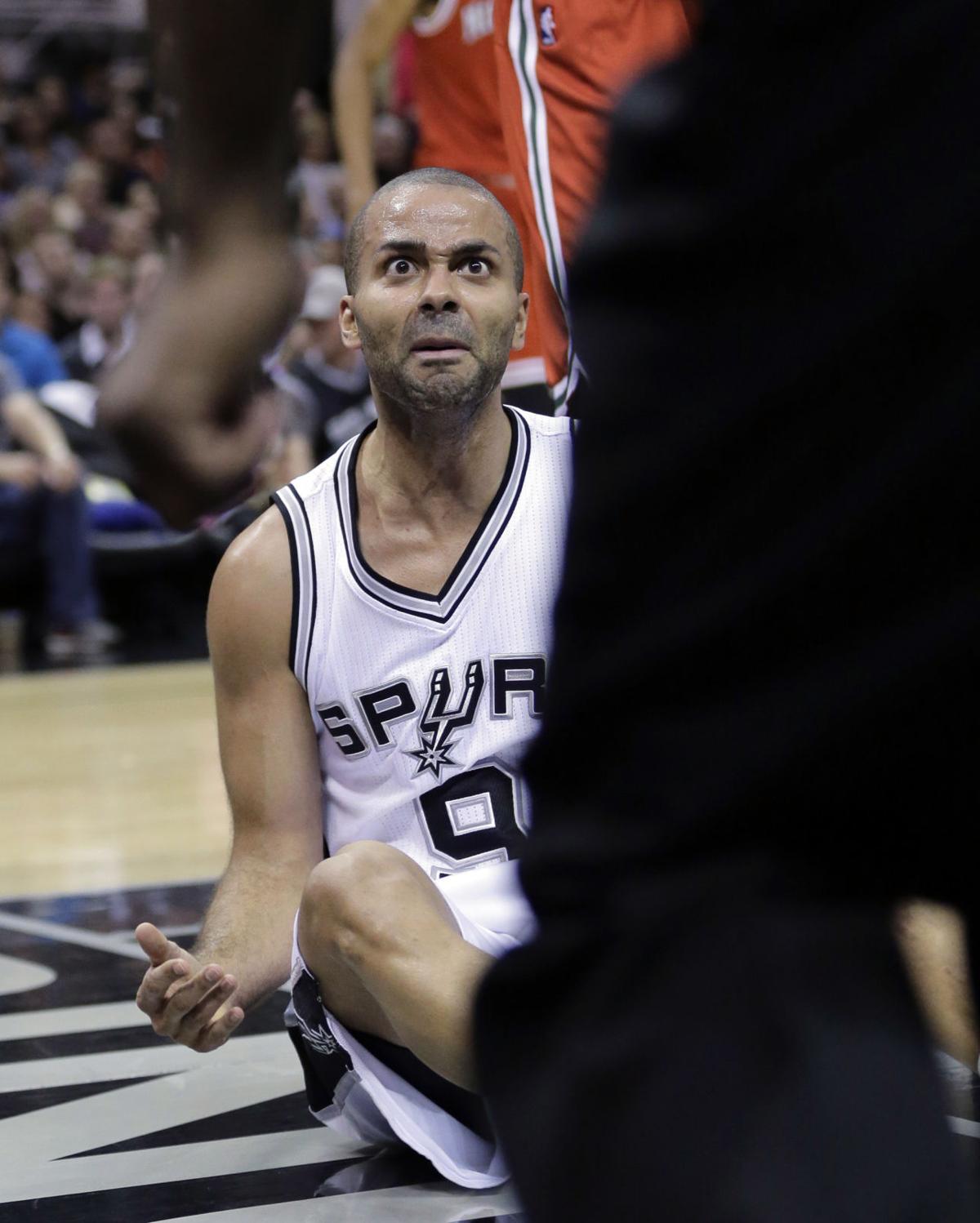 San Antonio Spurs’ Tony Parker (9) argues a call during the first half of an NBA basketball game against the Milwaukee Bucks, Sunday, Jan. 25, 2015, in San Antonio. (AP Photo/Eric Gay) 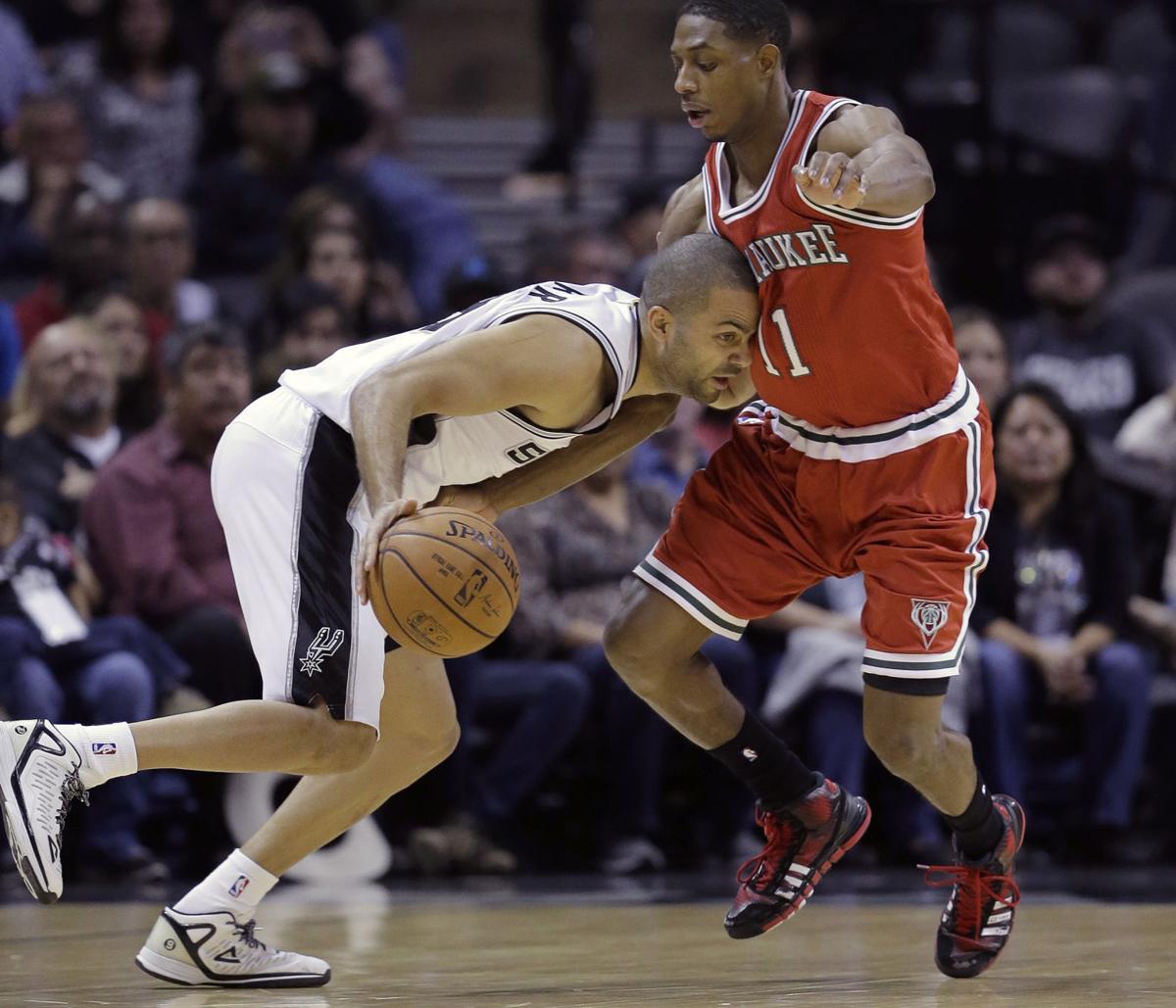 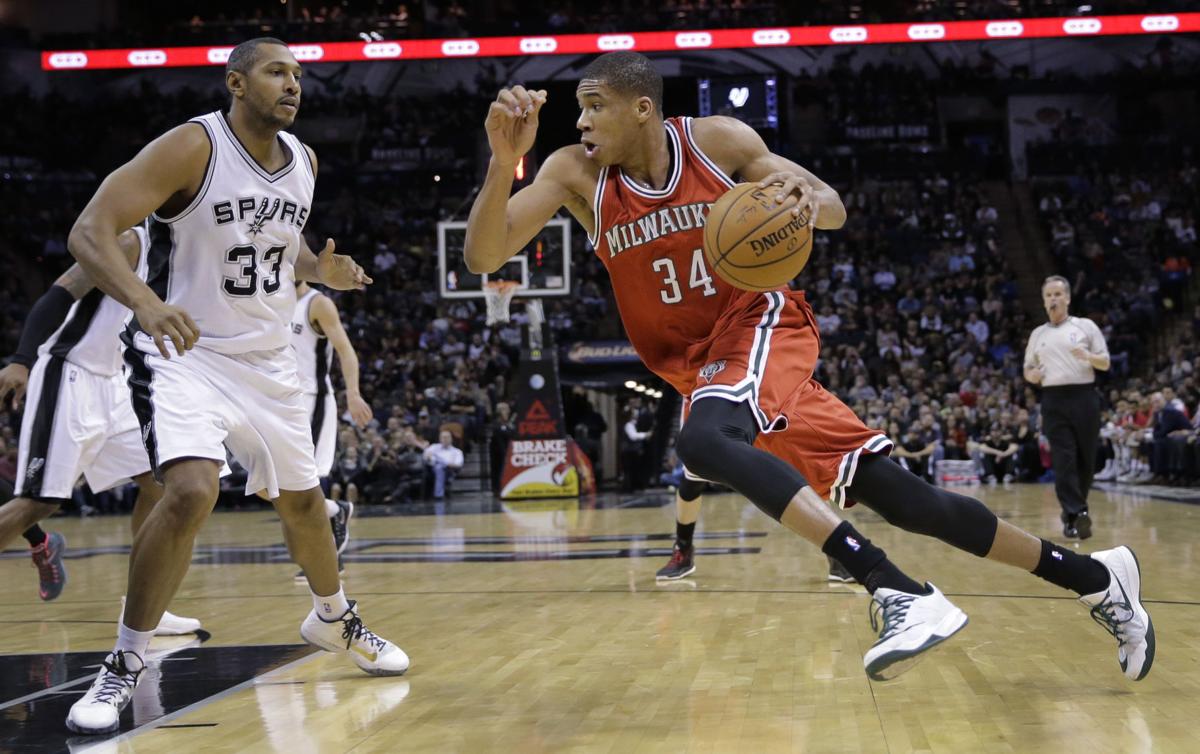 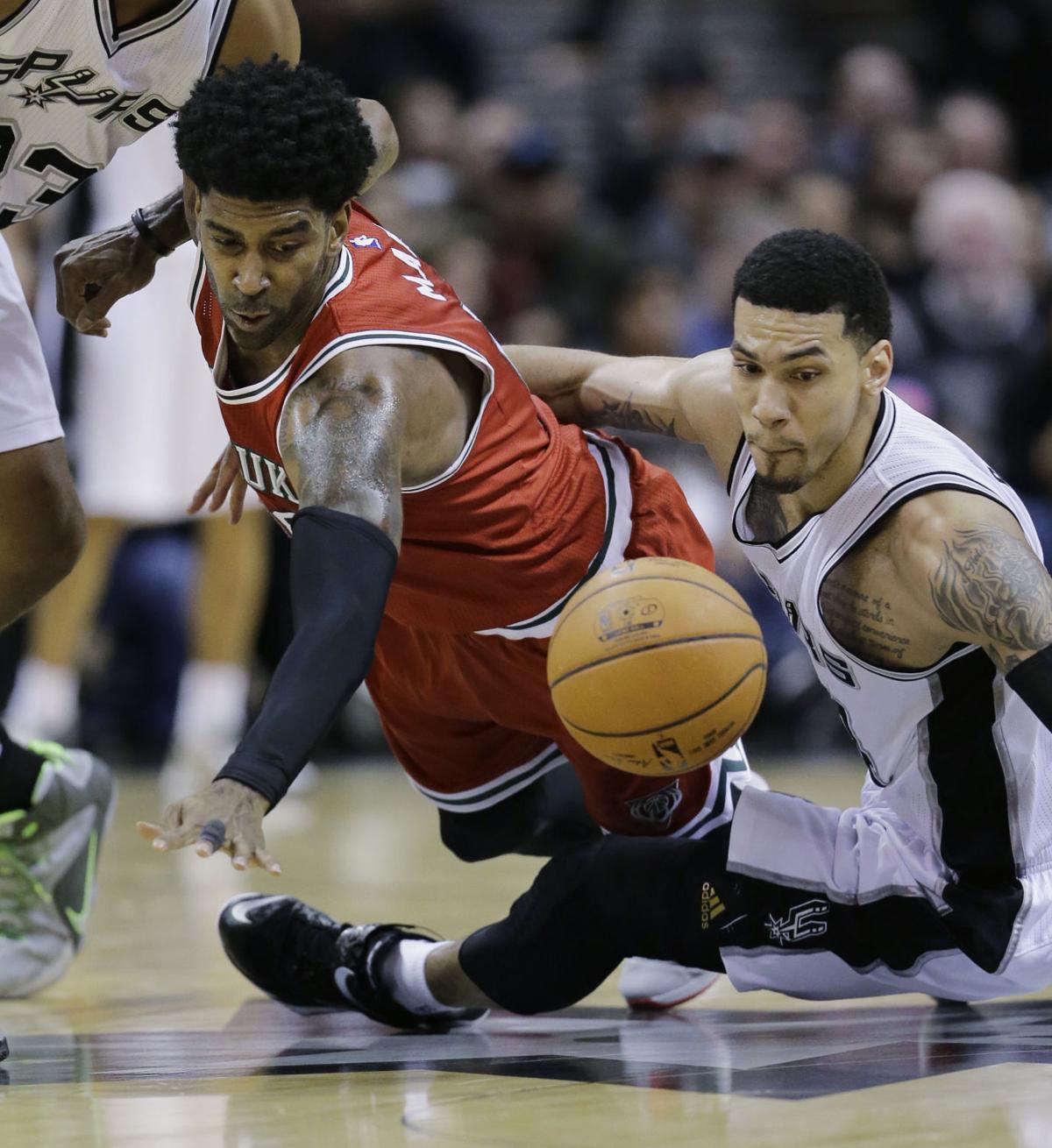 Milwaukee Bucks’ Jerryd Bayless (19) is fouled as he tries to drive to the basket past San Antonio Spurs’ Tony Parker (9) and Tim Duncan (21) during the first half of an NBA basketball game, Sunday, Jan. 25, 2015, in San Antonio. (AP Photo/Eric Gay)

San Antonio Spurs’ Tony Parker (9) argues a call during the first half of an NBA basketball game against the Milwaukee Bucks, Sunday, Jan. 25, 2015, in San Antonio. (AP Photo/Eric Gay)

SAN ANTONIO (AP) — Milwaukee is developing a dynamic defense, but the San Antonio Spurs demonstrated how far the young Bucks still have to go.

Tim Duncan had 20 points and 11 rebounds, Kawhi Leonard added 19 points and 14 rebounds and San Antonio rallied in the second half for a 101-95 victory over Milwaukee on Sunday night.

Khris Middleton had 21 points and Jerryd Bayless had 15 points for the Bucks, who lost after defeating Detroit on Saturday.

San Antonio's fifth straight win at home over Milwaukee started off on a bad note as the Bucks raced to a 24-12 lead 9 minutes in the game.

"It felt bad that we couldn't score," Spurs guard Manu Ginobili said. "We were taking some bad shots, some turnovers; they were really picking us apart at that point. It was looking bad."

The Spurs struggled to score in the first half against a Bucks defense that is holding opponents to 44 percent shooting.

Middleton had 12 points in the first half against a San Antonio team that seemed confounded by Milwaukee's defensive energy. The Spurs trailed 55-47 while shooting 40 percent from the field.

"Actually, when they're young and they've changed their team a bit, and their coach, it takes a little while to get used to it," Duncan said. "We hadn't seen them. It took a half to get used to what they were doing. And then when we did, we did a much better job; taking care of the ball, moving the ball and luckily we made some shots."

San Antonio rallied by holding Milwaukee to 4-for-19 shooting in the third quarter, turning what had been a 12-point deficit into a burgeoning lead.

"We were more competitive," Popovich said. "We were stronger with the ball. We competed harder in the second half than we did in the first half. We made a few more shots, but it was about being more physical and focused."

The Spurs forced eight turnovers in the third quarter, sparking an 18-5 run to close the period. Leonard made a pair of free throws with 26.5 seconds remaining in the third to give the Spurs a 69-67 lead, their first lead since midway through the first quarter.

"For us, in the third quarter, we turned the ball over," Milwaukee coach Jason Kidd said. "We're playing the world champs. We know that they're going to make a run."

San Antonio shot 5 for 22 on 3-pointers, but took 17 more free throws and forced Milwaukee into 21 turnovers.

Bucks: After ranking as low as 21st defensively in the league, Milwaukee has climbed into the top five since Dec. 26. The Bucks were third in the league, allowing 97.0 points per game. ... The Bucks held San Antonio to 42 percent shooting, which is the 17th straight game they have held an opponent to less than 50 percent. ... Milwaukee has not won in San Antonio since Dec. 30, 2008, which represents a five-game skid.

Spurs: San Antonio is two games into a six-game homestand before hitting the road for their annual rodeo roadtrip, which consists of eight road games over a three-week period in February. ... San Antonio has used 23 different starting lineups in 46 games, which is second only to the New York Knicks (25) this season.

The return of Patty Mills from offseason shoulder surgery and a healthy Parker have limited Cory Joseph's minutes, but the fourth-year point guard is still a valuable asset to Popovich. Joseph did not score and had no assists in 16 minutes, but his defense and hustle helped the Spurs rally in the second half. "He had a significant impact," Popovich said. "He comes in and he makes it tougher for the other team to score. He gets loose balls, he rebounds, he does everything that helps the team, all the blue-collar kinds of things. He got down and he really made a big contribution, but hardly anyone notices it."

Duncan was 9-for-13 shooting and had seven defensive rebounds in picking up his 818th career double-double. He trails Lakers Hall of Famer Kareem Abdul-Jabbar's 885 for fourth all-time.