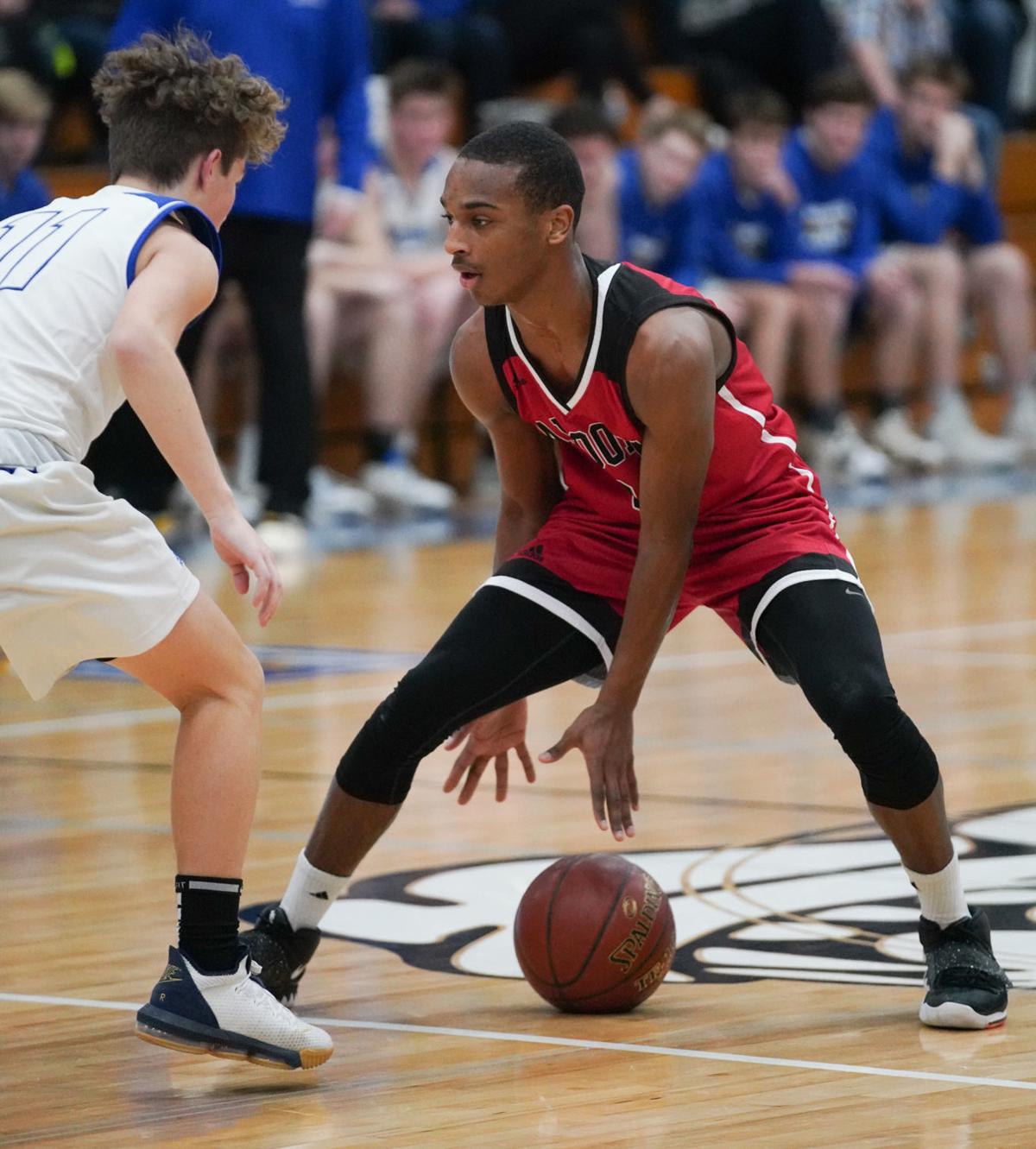 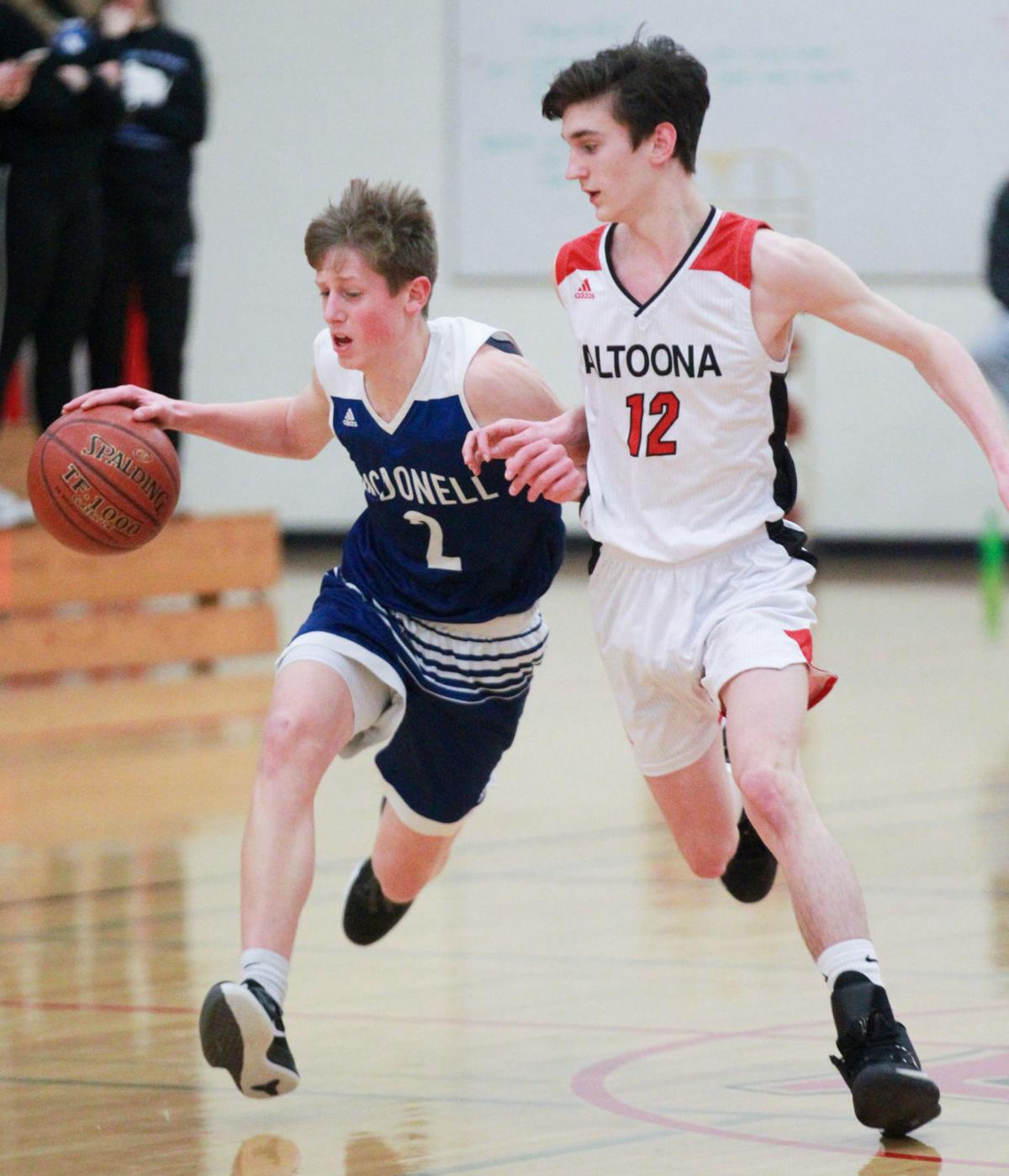 McDonell's Jake Siegenthaler carries the ball up court while defended closely by Altoona's Brayden Turk on Thursday, Feb. 13, in Altoona.

McDonell's Jake Siegenthaler carries the ball up court while defended closely by Altoona's Brayden Turk on Thursday, Feb. 13, in Altoona.

Altoona waded through a tough basketball schedule to a 17-7 record, taking a Western Cloverbelt Conference championship along the way.

It took the Railroaders to the sectional semifinals before being ousted by powerful Wisconsin Dells.

The best part looking ahead to next year; they lose only one full-time starter among three seniors. And the highly-successful JV team did not lose to a Cloverbelt opponent.

“We’ve started something special,” said first-year coach Paul Henrichs. “We know we’ve got a bullseye on our back as we keep going, we’ll just take them one game at a time.”

The schedule included games with Menomonie of the Big Rivers and La Crosse Logan along with Gale-Ettrick-Trempealeau, Stratford and Mauston to name a few.

“Moving up to D3, we tried to find tougher opponents and I feel it helped us,” Henrichs said. “We got beat up some, but we learned something.”

In the sectional, the Rails lost to experienced Wisconsin Dells 69-42 although they were within 12 at one point in the second half.

“They were good,” Henrichs said, “but we want to find out how we can become like them.”

Although Keshawn Harris led the way, it was a balanced attack that was a team trademark.

Joining Harris as double-figure scorers were Brayden Turk, Evan Moss and Nate McMahon, the only senior of the group.

“That’s what made us so dangerous,” Henrichs said. “We had different kids step up throughout the season and that’s what got us to where we were.”

Harris, a 6-0 junior, was named the conference MVP and for good reason. He led the club in most categories, scoring 394 points at a 16.4 average while shooting 57 percent from the floor; pulled 209 rebounds at a 9.1 average and was credited with 109 assists at a 4.7 clip. His high game was 31 points.

“He is one of the quickest kids I’ve ever coached,” Henrichs said. “And he’s a great leader.”

“Turk was one of our outside shooters and Moss was able to do things well inside,” Henrichs said.

“For his size, he was able to do it all,” Henrichs said of McMahon. “He was a 3-point shooter, handled the ball and was a great leader.”

The other seniors, who were able to make key contributions, were Chris Ray with 111 points and Carter Ternberg with 63.

Blend Sabani, a 6-1 sophomore who saw some starting time, scored 99 points and will be counted upon next year, along with other underclassmen Anthony Giani, Marsten Salsbury, Evan Peterson, Raekwon Cole, Reece Bergh and Gannon Tambornino.