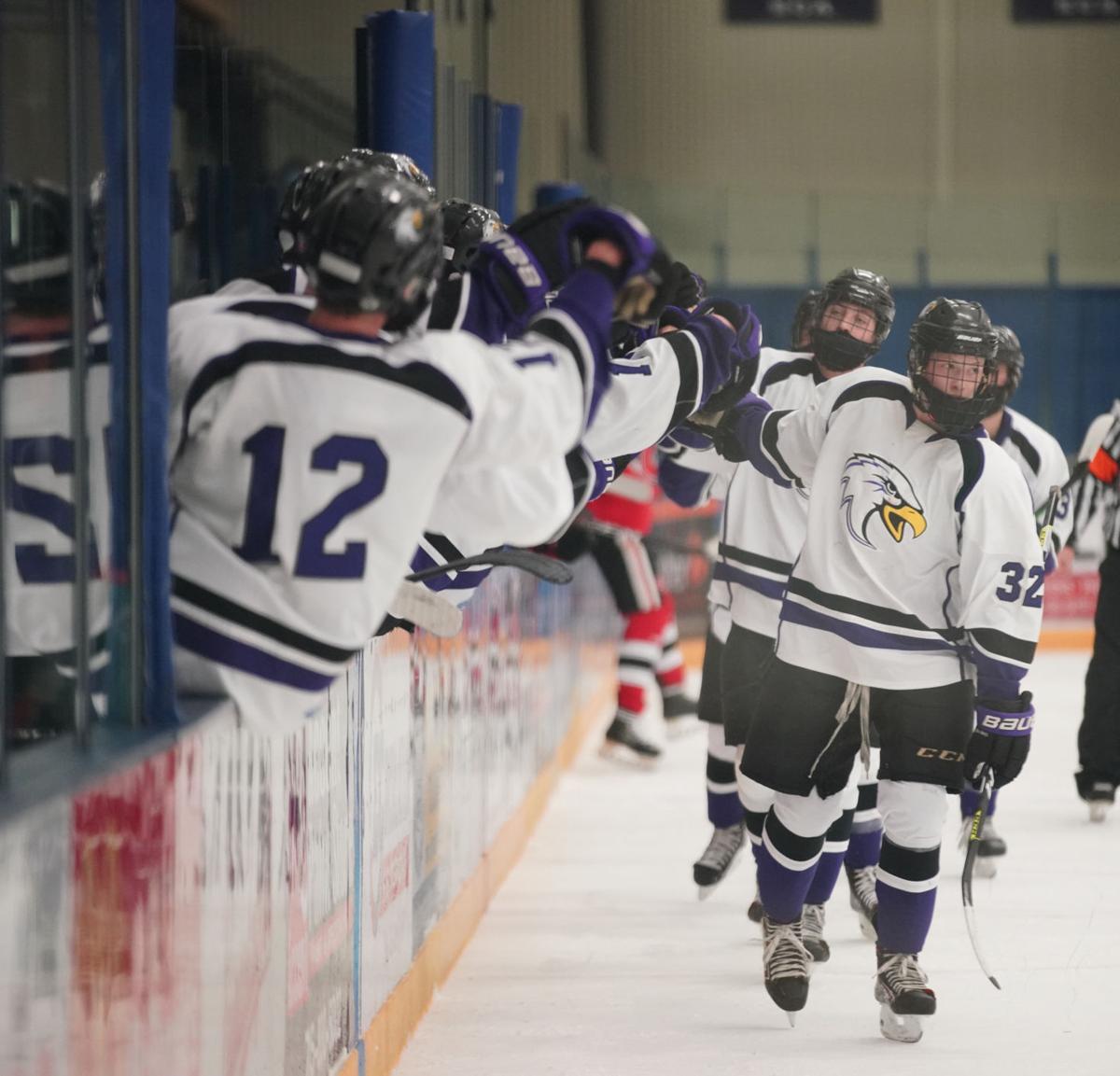 Eau Claire Memorial players celebrate after a goal during a game against Chippewa Falls on Saturday at Hobbs Ice Arena. 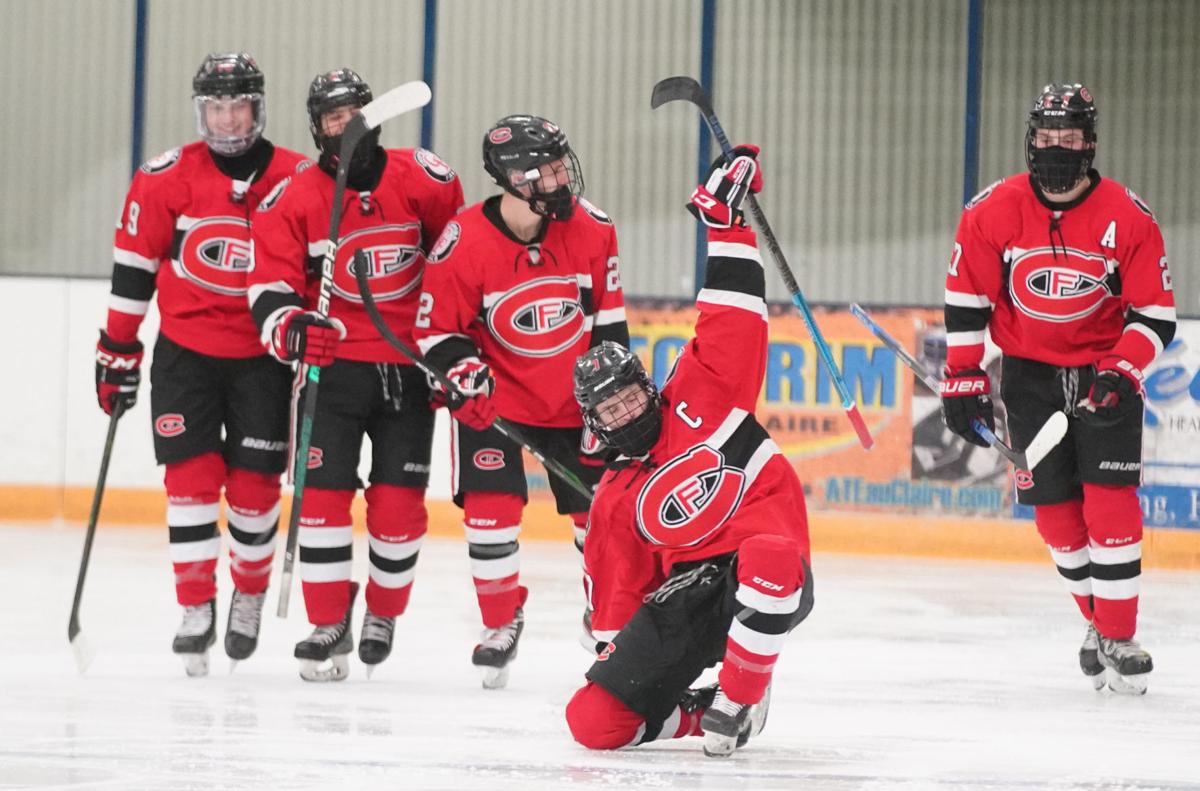 Chippewa Falls' Isaac Frenette, center, celebrates after a goal during a game against Eau Claire Memorial on Saturday at Hobbs Ice Arena. 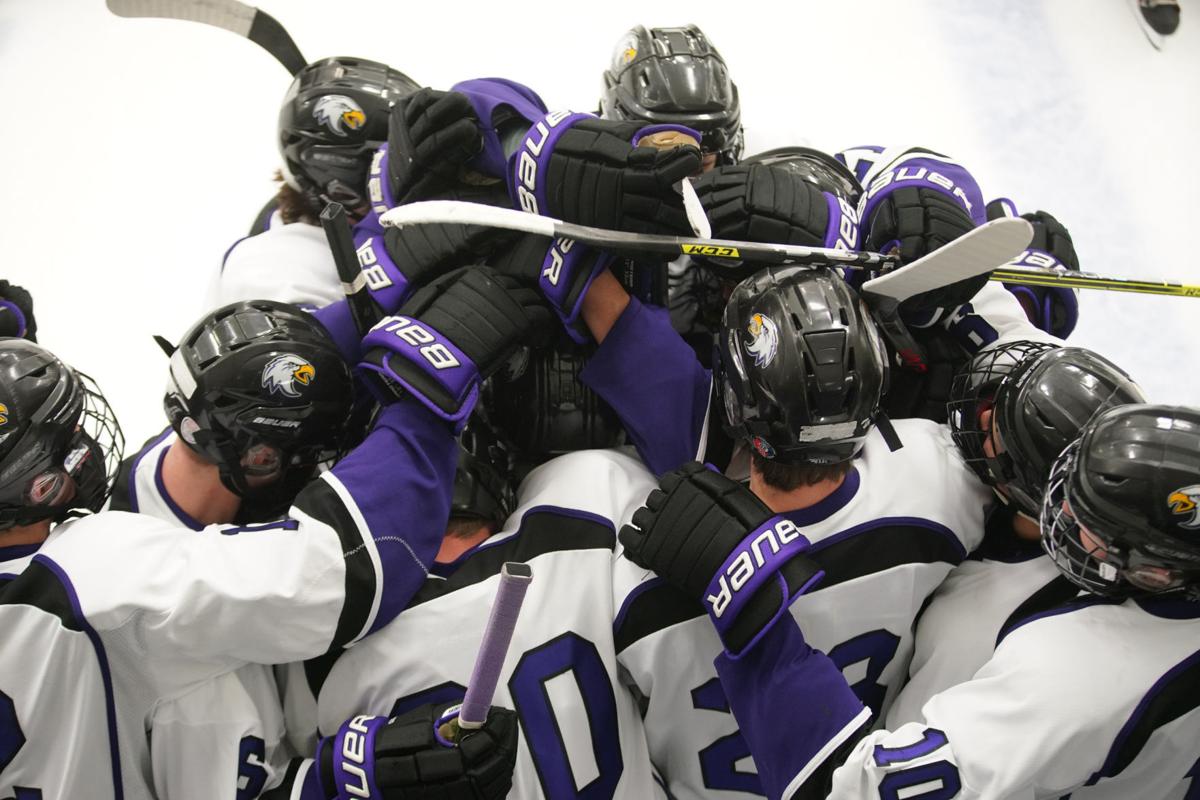 Members of the Eau Claire Memorial boys hockey team celebrate after a goal during a game against Chippewa Falls on Saturday at Hobbs Ice Arena. 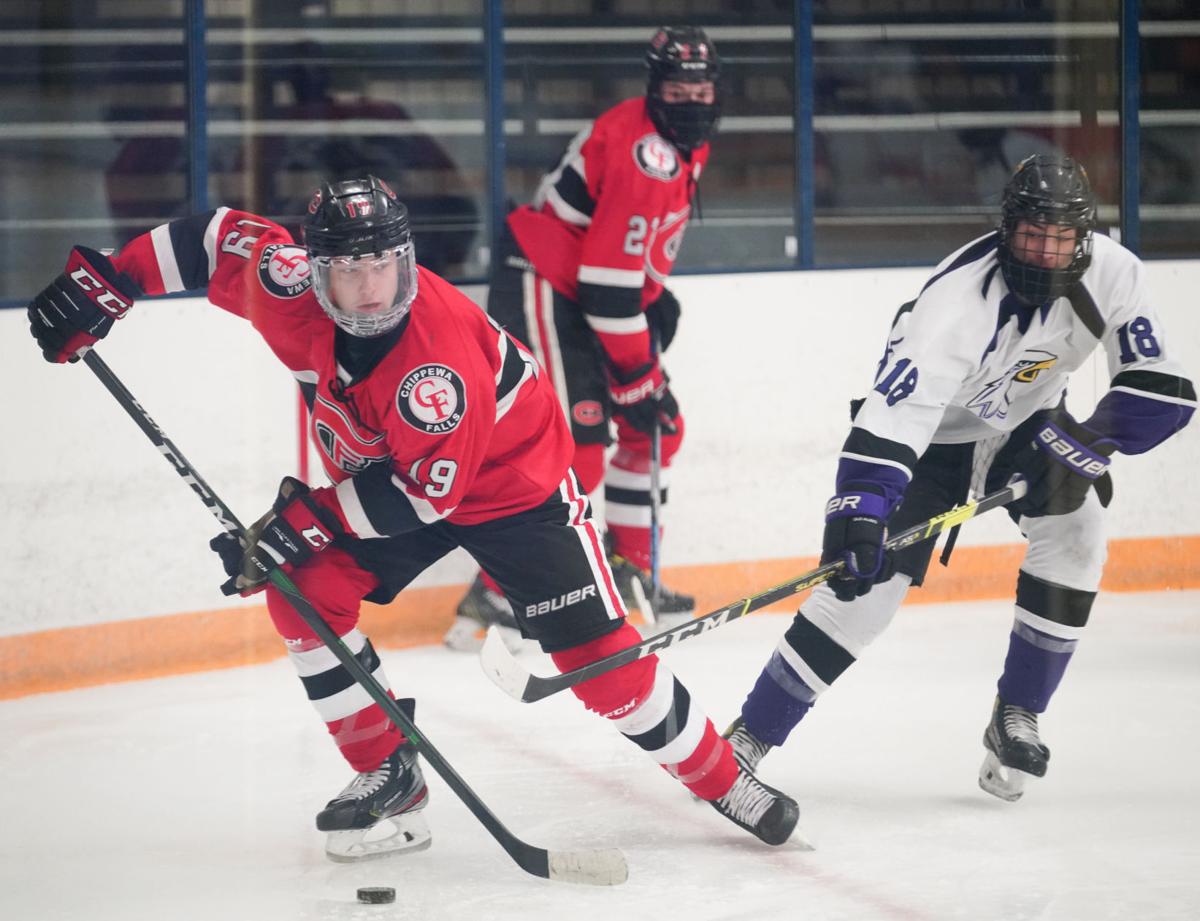 Eau Claire Memorial players celebrate after a goal during a game against Chippewa Falls on Saturday at Hobbs Ice Arena.

Chippewa Falls' Isaac Frenette, center, celebrates after a goal during a game against Eau Claire Memorial on Saturday at Hobbs Ice Arena.

Members of the Eau Claire Memorial boys hockey team celebrate after a goal during a game against Chippewa Falls on Saturday at Hobbs Ice Arena.

Hobbs Ice Center, fresh off reopening to the public, saw a heavyweight bout featuring a fair share of haymakers from both sides Saturday. Thankfully for Eau Claire Memorial, it showed it can hang with the punches in a much-needed Big Rivers victory.

A three-goal outburst in the second period helped the Old Abes pull ahead after a wild first period, and the group survived a late Chippewa Falls push in a 7-5 triumph at Hobbs Ice Center. The victory avenges an earlier 3-1 loss to the Cardinals on Dec. 30 in Chippewa Falls and ends a tough run against the team's top BRC foes.

"Today was the first day I think we played to our potential," Eau Claire Memorial coach Mike Collins said.

The Cardinals were without star goalie Bridger Fixmer due to injury, but it wasn't like Zach LeMay was given much of a chance on many of the Memorial goals. Collins' group put on an impressive display of shooting accuracy and passing prowess. The tone was set from the first Memorial goal, when Peyton Platter absolutely sniped the top right corner from the left circle. Carter Olson did the same later in the first, except he picked the top left corner.

"We shot the puck, we followed our shots and we created opportunities," Collins said. "That's something we hadn't done enough of consistently. Today we did."

The two teams traded goals in the first period, with Chippewa Falls' Isaac Frenette opening the scoring just over 30 seconds in. He got behind the defense to track down a puck sliding into the Memorial zone and sent a wrister past Memorial goalie Kyler Strenke. The Cards got a second goal from Frenette and one from Jack Bowe in the first, with the latter putting them up 3-2, but the Abes had the answers to force a 3-3 tie at the first break.

"When your team goes back and scores a goal it feels great," Strenke said of the back-and-forth nature of the game. "You know you can trust your team. This is the first game where I'm finally like, 'I trust my team.' If I get scored on, they're going to have my back. I can look at all these guys and these are my brothers now instead of just my teammates."

A three-goal Memorial run featuring a pair of tallies from Joe Kelly and one from Trevin Kison to open up the second period gave the team all the cushion it would need.

Chippewa Falls kept it interesting thanks to a Bowe goal late in the second period and continued to put pressure on Strenke in the third. The Cardinals attack culminated in one final goal, when Owen Krista was able to redirect a Carsten Reeg shot into the back of the net with two minutes remaining. But Memorial held on, with Christian Tavare sealing it on an empty netter with 44 seconds remaining.

"We're all getting together and we're finally tic-tac-toeing and scoring," Strenke said. "We've got a legacy. We've got to live it on. It is time to bring this legacy back."

The contest was the first of the season for the Old Abes at Hobbs and the first since members of the team publicly requested the loosening of rules at the facility. Memorial's appeal to the City of Eau Claire and Hobbs Ice Center, posted to Youtube on Tuesday, has been viewed over 3,500 times as of Saturday afternoon.

"We didn't expect anything from that," Strenke said. "We wanted to simply send it here and hopefully, maybe, they'd be nice enough to let us play a game or two. All of a sudden everyone enjoyed it. ... We're all just stunned by it. It's a great feeling, we're able to finally show what we've got back here in Eau Claire."

Memorial and Chippewa Falls both followed Hobbs' Phase 3 guidelines, which most noticeably limit the team benches to 10 players. The remaining reserves sat in chairs put in the hallway next to the bench. There were no fans in attendance, only team staff and media perched in the O'Brien Rink mezzanine.

Saturday's matchup marked the second varsity game of the season at Hobbs. North kicked things off on Tuesday with a game against Hudson.

"It feels awesome to be back here," Strenke said. "Just being able to hear the same music that we listened to, be in the same locker rooms. Thinking about those memories we used to have, it was great."

Collins said, even with the rules, the familiar setting is already benefitting the Abes. They spent the early stages of the season entirely on the road.

"I think a huge difference for us is we had five days of practice," Collins said. "We get to skate as a team in our home rink. That was huge."

Memorial moved to 3-3 in Big Rivers play, having previously lost to Eau Claire North, Hudson and these Cardinals.

Chippewa Falls has set its sights on a Big Rivers title this season, but it will now need help after falling to 4-2 in league play. Hudson sits atop the standings at 7-0.

"The message right now is you have to put this behind you and practice harder and play harder," Parker said. "I think collectively as a unit, play better team hockey. We were stressing that and we talked about that. We know Memorial is a good team, we talked about that too, but I think we need to think about accepting and looking in the mirror and being like, 'Yeah, maybe this wasn't my best game.' We need to accept that."